Hammurabi’s Code: Was it Just

Hammurabi, the king of the small city-state of Babylon, ruled for 42 years making 282 laws being written in cuneiform. Together, these 282 laws carved onto a large stone, make up what has come to be known as Hammurabi’s code. Hammurabi’s code was not just because some of the laws were not only greatly exaggerated towards those accused of crimes, but also the consequences of the suggested crimes were unfair and cruel when viewed through the 21st century perspective. Hammurabi’s code is known to have been inscribed into stone in cuneiform.

Don't use plagiarized sources. Get your custom essay on
“ Hammurabi’s Code: Was it Just ”
Get custom paper
NEW! smart matching with writer

Because laws were most literally written in stone, the laws could never be altered or changed to suit situations or” new times” better. This is seen as unfair in the 21st century perspective because, for example, the United States constitution can be added onto and laws, or amendments, can and have been, repealed while none of this could’ve have been done to Hammurabi’s code.. (Doc A)

Even though Hammurabi’s intentions seem to be good by making the intention of the codes to protect the weak from the strong as well as the widows and the orphans, these laws come off a bit harshly (Doc B) .

For instance, it is an exaggeration for a married lady to be caught in an affair with another man and to then be punished by being tied together and being drowned (Doc C, Law 129). With the values that the people in the 21st century have, this punishment would be perceived as immoral.

Rather than being sentenced to death by suffocation, fornication can be solved through discussion and forgiveness or by divorce.

Another example of these harsh codes would be the excess of cruelty for a sons hand to be cut off for striking his father (Doc C, Law 195). In both 21st century and 4,000 years ago, the son’s action is seen as wrong and disrespectful, but the amputation of a sons hand is simply unethical. A more proper castigation would be to correct your son through parental discipline, or disowning him, or if he is of age, to bring him forth to court.

An additional reference to an inhumane punishment would be the death, or hanging, of a robber in the same hole in which he made to break an entering into a home (Doc D, Law 21). An alternative correction to this crime would be for the intruder to be tried in court, and if found guilty of charge, to be sentenced to a fair amount of years for his crime in jail.

Even if these laws were moral 4,000 years ago, they are not ethical or viewed as just today because the consequences of the crimes are exaggerated and cruel. To be able to further prove that these codes were foul, a journal of those who were appointed guilty and punished would be great proof of how unfair these castigations were.

Hammurabi’s Code: Was it Just. (2016, Jun 01). Retrieved from https://studymoose.com/hammurabis-code-was-it-just-essay 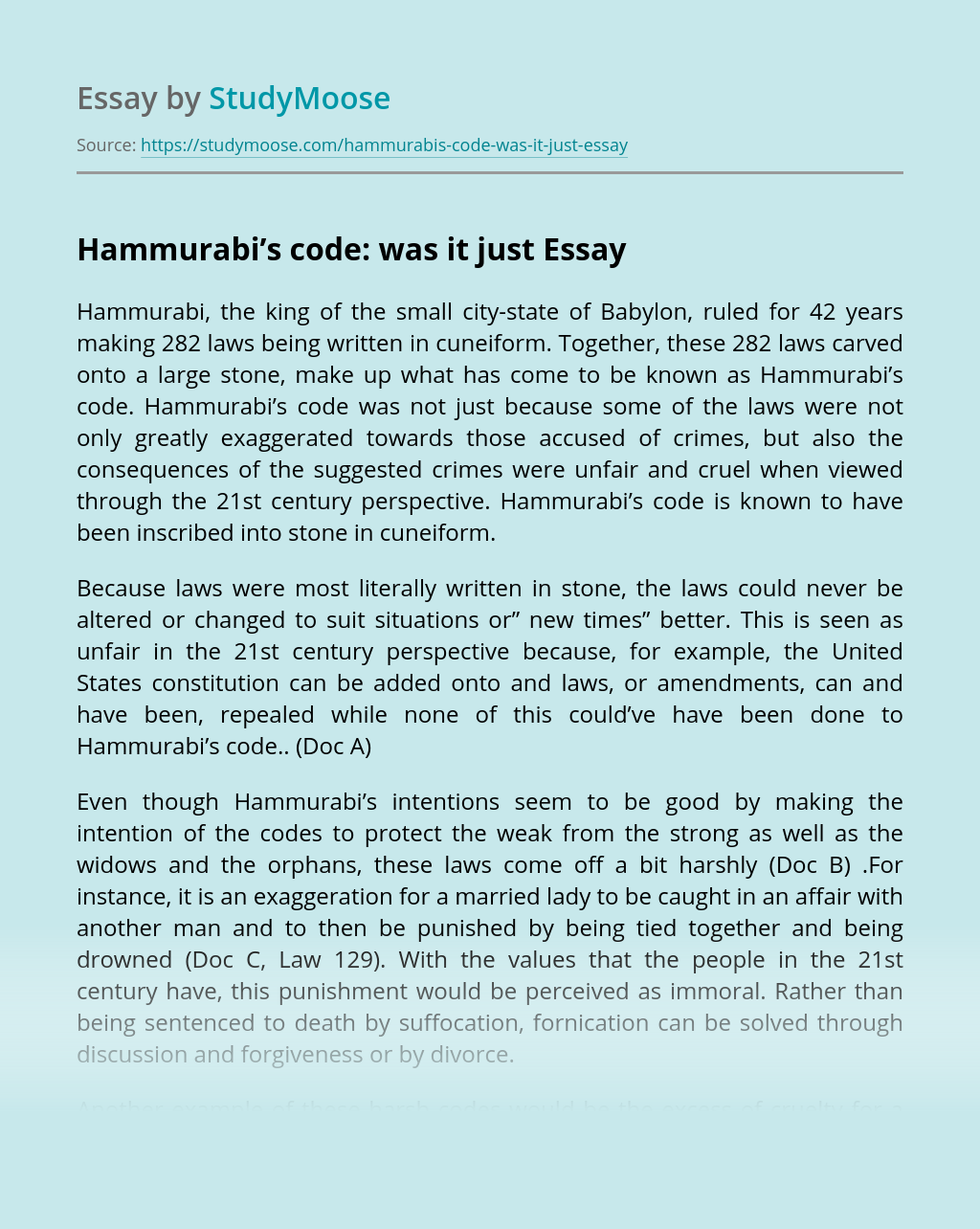