Laws of Manu vs Code of Hammurabi

Don't use plagiarized sources. Get your custom essay on
“ Laws of Manu vs Code of Hammurabi ”
Get custom paper
NEW! smart matching with writer

In my opinion, The Code of Hammurabi was harsher than The Laws of Manu.

The Code of Hammurabi was for all the people no matter what class they were classified in, even though slaves and women were mostly treated like property in all places at this time. The Code of Hammurabi was also made more as what is morally right and to help maintain order in the civilizations; while the Laws of Manu were made more on the religious side and to promise the people eternal life if they followed these laws.

In the Laws of Manu they get in more depth of every aspect of people’s lives. In chapter two, number 57, it states, “excessive eating is prejudicial to health, to fame, and to bliss in heaven; it prevents the acquisition of spiritual merit, and is odious among men; one ought, for the reasons, to avoid carefully.

” That’s telling people how much they should eat. The laws of Manu are basically telling people how to live their lives in every aspect and if you don’t you won’t have eternal life. The laws also have different rules based on what caste the people are categorized into; the higher the caste, the more privileges.

In Chapter five, number 32 it states, “A Brahmana, having got rid of his body by one of those modes practiced the great sages is exalted in the world of Brahinan, free from sorrow and fear. ” The laws promises if you obey these laws you will never feel any pain and just happiness. It also put all Brahmanas on a high pedestal and a lot of the laws do not apply to them. In Chapter 10, number 103, “By teaching, by sacrificing for, and by accepting gifts from despicable (men) Brahmanas (in distress) commit not sin, for they (are as pure) as fire and water.

Religious Purpose of The Laws of Manu

The Code of Hammurabi also has more of a revenge seeking tone to it. Just in number one is the perfect example for people to get revenge. “If any one enshare another, putting a ban upon him, but he cannot prove it, then he that ensured him shall be put to death. ” Another example of revenge is number 218, “If an physician make a large incision with the operating knife, and cut out the eye, his hands shall be cut off. ” This document for the most part was mostly a way to punish people or bring justice to the people.

Women Rights in the Codes

Surprisingly to me, they both had women rights in there as well. The Laws of Manu gave more freedom to women but yet the Code of Hammurabi gave women more protection. In number 130, “If a man violates the wife of another man, who has never known a man, and still lives in her father’s house, and sleeps with her and be surprised, this man shall be put to death, but his wife is blameless. In the Laws of Manu, chapter eight, number 364 it states “He who violates an unwilling maiden shall instantly suffer corporal punishment; but a man who enjoys a willing maiden shall not suffer corporal punishment, if his caste be the same as hers.

Not only does that show justice for women but gave women freedom to have casual sex and from the context clues of the Code of Hammurabi, it was frown upon and not classy. Women still didn’t live independent in both civilizations. Also, in both civilizations women were under control by a man from birth to death. Before marriage it is her father, during marriage it is her husband, and at old age it is her son(s). In the Laws of Manu, Chapter nine, number 14, “Women do not care for beauty, nor is their attention fixed on age; (thinking), ‘(It is enough that) he is a man,’ they give themselves to the handsome and to the ugly.

You can also tell that both societies take marriage and respect serious. Unlike in this day and time, the wife gets nothing if divorce is approved. In the Code of Hammurabi number 141, “If a man’s wife, who lives in his house, wishes to leave it, plunges into debt, tries to ruin her house, neglects her husband, and is judicially convicted: if her husband offer her release, she may go on her way, and he gives her nothing as a gift of release. If her husband does not wish to release her, and if he takes another wife, she shall remain as a servant in her husband’s house. In the Laws of Manu it shows that the Indian society did not have age limits on marriage. In chapter nine, number 94, “ A man, aged thirty years, shall marry a maiden of twelve who pleases him, or a man of twenty-four a girl eight years of age; if (the performance of) his duties would (otherwise) be impeded, (he must marry) sooner. ” Both documents were made to control people and both were harsh compared to what we know and live today. They both inform us of how life was back then and how time changes. Some things are still used in today’s societies, like the how women should always remain classy.

In the Laws of Manu it states in chapter nine, number 13, “Drinking (spirituous liquor), associating with wicked people, separation from the husband, rambling abroad, sleeping (at unseasonable hours), and dwelling in other men’s houses, are the six causes of the ruin of women. Also in the Code of Hammurabi, number 110, “If a sister of a god open a tavern, or enter a tavern to drink, then shall this woman be burned to death. ” Even though they are from different places they still have the same concept and purposes.

Laws of Manu vs Code of Hammurabi. (2016, Nov 05). Retrieved from https://studymoose.com/laws-of-manu-vs-code-of-hammurabi-essay 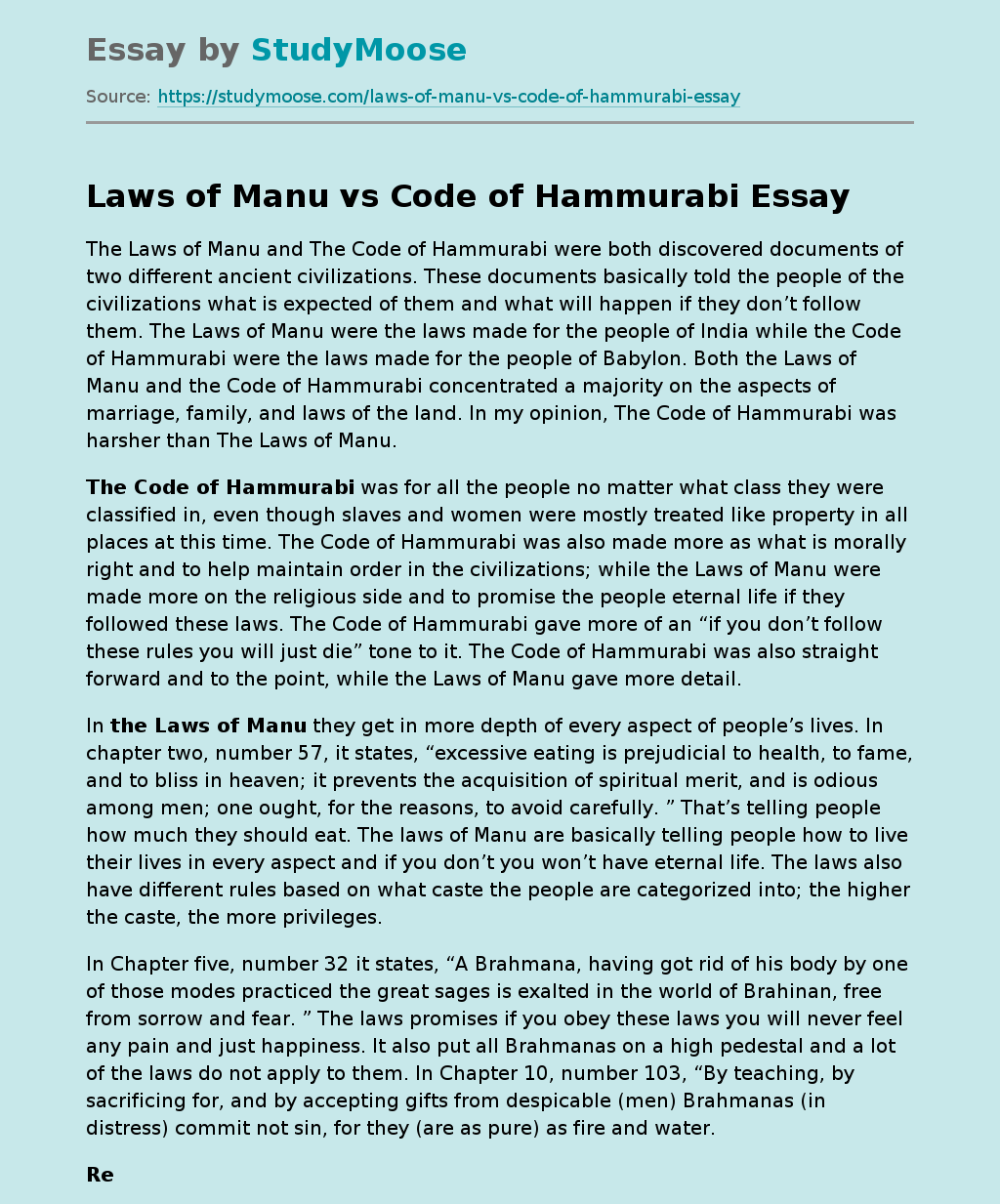