Don't use plagiarized sources. Get your custom essay on
“ Code Switching During Interpersonal Communication ”
Get custom paper
NEW! smart matching with writer

Data for the present paper were collected from the Tamil speaking undergraduate students of the University Putra Malaysia, Malaysia. Their interaction in different identified domains involving three languages viz.

Tamil, Malay and English were looked into. Gumperz (1982) while discussing the communicative function of code switching, claims that the speaker plays upon the connection of the we-code to create conversational effect. Thus code switching is seen as fulfilling the relational and referential functions of language that amounts to effective communication and interlingual unity.

Communicative functions and Reasons for Codeswitching

Data for the present study were collected from Tamil speaking University students who have enrolled as undergraduate students in the University Putra Malaysia, Malaysia.

The data were collected from these students while they were interacting in different domains viz. classroom, university campus, family, market, neighborhood etc. In all these domains they have to interact with Malay and Chinese speakers apart from as well as with other Tamil speakers. It is observed that all the students from whom the data were collected are competent to a certain extent in Tamil, Malay and English.

Gumperz (1982) when discussing communicative functions, mentions the discourse function of codeswitching, also called the personalization function of language. A speaker plays upon the connotation of the we-code to create a conversational effect. Thus, code switching is seen as fulfilling the relational and referential function of language that amounts to effective communication and interlingual unity.

Halliday (1975) on the other hand, views code switching as fulfilling the interpersonal function of communication. Here the mixed language spoken plays the role of a mediator. In other words, it is the use of language to act as a mediator between self and participants in the communicative event. In fulfilling the relational and referential functions, code switching is seen as the medium to convey both social and linguistic meanings. Gumperz (pg. 144, 1982) lists examples of situations created to convey meaning as given below:

Karen Kow (2003) listed in her article a few possible conditions for code switching. Some of the conditions given are

Kow suggests that from the list above, it may be possible to predict which conditions act on a particular sociolinguistic context for codeswitching, for example, when a person who lacks a word in English due to limited vocabulary code switches by using the lexical component from his/her first language instead of English. Therefore, the function here is to overcome the language barrier to meaning-making. Another example is a condition where the speaker, intending to express group solidarity, employs code switching. The function for the switch in this case is to establish goodwill and rapport. Similarly series of conditions can be established for the phenomenon of code switching depending on the social context.

Such communicative functions of codeswitching can also be listed according to the functions that they try to accomplish. Among these, the following ten functions have been described in the professional literature (Malik, 1994):

According to Malik (1994), bilinguals or multilinguals often explain that they code switch when they cannot find an appropriate expression or vocabulary item or when the language of conversation does not have the particular word needed to carry on the conversation smoothly. He offers the example of “Charan Sparsh” (touching feet) that does not convey the same meaning in the speaker’s code as it does in Hindi. The reason for switching may however be culturally conditioned and David (2003) notes that an alien concept often has a speaker switch to the language from which the concept is borrowed. For example, like the lexical item social drinker in English that is unacceptable in a Malay situation because of the simple fact that drinking alcohol is prohibited in Islam and the Malay-Muslim world does not have a word for it that is equivalent to its meaning in English. Hence, the phrase social drinker is directly borrowed and used as an instance of phrase level mixing as in the following example:

When speakers are not equally competent in two languages and when the speakers do not know the terms in two languages, then codeswitching occurs. For example, college students often code switch by moving from Hindi to English. In certain occupations code switching takes place in the speech of doctors, lawyers, engineers while they interact among themselves owing to the fact that proper terms in Hindi or in any other language other than English may not be available to them. As a result, they utilize the English terminology that they are familiar with. Thus, one can identify a great deal of lexical code mixing.

As David (2003) notes, it is vital for a courtroom setting in Malaysia that a specific terminology be used to refer correctly to an object or a character. The use of the exact terminology or vocabulary is important in this setting when the terminology plays an important role and has the potentiality to make a major impact on life and death, freedom or imprisonment. Therefore, whichever the code is that enables the speaker to get his/her exact meaning across will be the one that is acceptable to the interactants including one where language mixing occurs. The following example cited by David is to the point:

Mood of the speaker

Malik (1994) claims that usually when bilinguals are tired or angry, code switching takes place with a new dimension. This means, when the speaker is in the right state of mind, he/she can find the appropriate word or expression in the base language. Very often he/she knows exactly the word in both the languages (X and Y) but the language Y may be more available at the point of time when the speaker has a disturbed mind. Such circumstances may create a hurdle in getting the appropriate word or phrase in the language in which the speaker may be more proficient if he is not mentally agitated.

To emphasize a point

Switching is also used to emphasize a point. Gal (1979) reports several instances in which a switch at the end of an argument not only helps to end the interaction but may serve to emphasize a point. She has taken an example from English/German code switching and stressed that switching from English to German is a means of adding more force to the statement. Meanwhile, David (2003) uses the courtroom environment to show how a defending lawyer uses dominant Bahasa Malaysia to start with and shifts to English to emphasize an important point to the judge that the accused had not committed any crime for 10 years.

Sebelum ini OKT pernah ditangkap pada tahun 1975 dan 1986. There has been a 10 years gap since the last offence Semenjak itu OKT telah berumahtangga, mempunyai kerja tetap dan insaf”. [Before this, OKT was caught in 1975 and 1986…..since then OKT has married and has held a steady job]

Malik.(1994) stresses the fact that code switching often occurs in fixed phrases of greeting and parting, commands and request, invitation, expressions of gratitude and discourse markers such as Oyes (listen), you know or pero (but), whereas Hoffman (1971) reports that in Puerto Rican homes, the mother gives short commands to their children in English, such as Don’t do that…. and the rest of the mother’s warning will be in Spanish.

David (2003), in turn, cites an example of habitual mixed discourse in a Malaysian courtroom where the dominant or matrix language is Bahasa Malaysia: Kes merupakan arrest case atau kes saman? [Is this an arrest case or a summons case?]

Malik (1994), Gumperz (1970, 1976, 1982), and Gumperz and Hernandez (1972) all stresses that switching at a particular moment conveys semantically significant information. It is a communicative resource that builds on participant’s perception of two languages. Lexical choice conveys meaning during codeswitching. Gal (1979) reinforced this view by stating that listeners interpret codeswitching as an indicator of the speaker’s attitude, or communicative intents and emotions as code switching is a tool for conveying appropriate linguistic and social information.

By the same token, David (2003) describes a range of speech acts like reprimands, directives, requests, and warnings that are conveyed by using different intricate strategies to show the semantic significance in certain specific situations. It is not only the lawyer who code switches, but also the judge. The example below shows how a judge shifts from Bahasa Malaysia, the national language and the official language at Malaysian courts, to English as a face saving gesture:

To show identity with a group

Di Pietro (1977) reports that Italian immigrants would tell a joke in English and give the punch line in Italian, not only because it was better said in Italian but also to stress the fact that they all belong to the same minority group, with shared values and experiences (cited in Malik, 1994).

8. To address a different audience: Malik (1994) states that code switching is also used when the speaker intends to address people coming from various linguistic backgrounds. For example, in India the television announcer often uses Hindi as it is the national language but also switches to English. Also, he often repeats the same in English for South Indians or Indian people who do not know Hindi.

Similar types of situations have also been reported in some other settings. Linguistic reinforcement often takes place even in courts, according to David (2003) where counsels tend to speak to a number of different interlocutors at the same time. During such occasions obviously they mix codes or switch codes accordint to the ethnicity of the addressee. One reason for such use of mixed languages is to address simultaneously persons from different linguistic backgrounds. Also, the speaker clearly distinguishes whom he/she addresses and what should be communicated. Hence, the speaker uses part of the sentence in one language and the other part in another language. In the example below the lawyer used a mixed discourse of English/Malay, and the part of his utterance in English is directed to the judge and the other in Malay is meant for the witness. 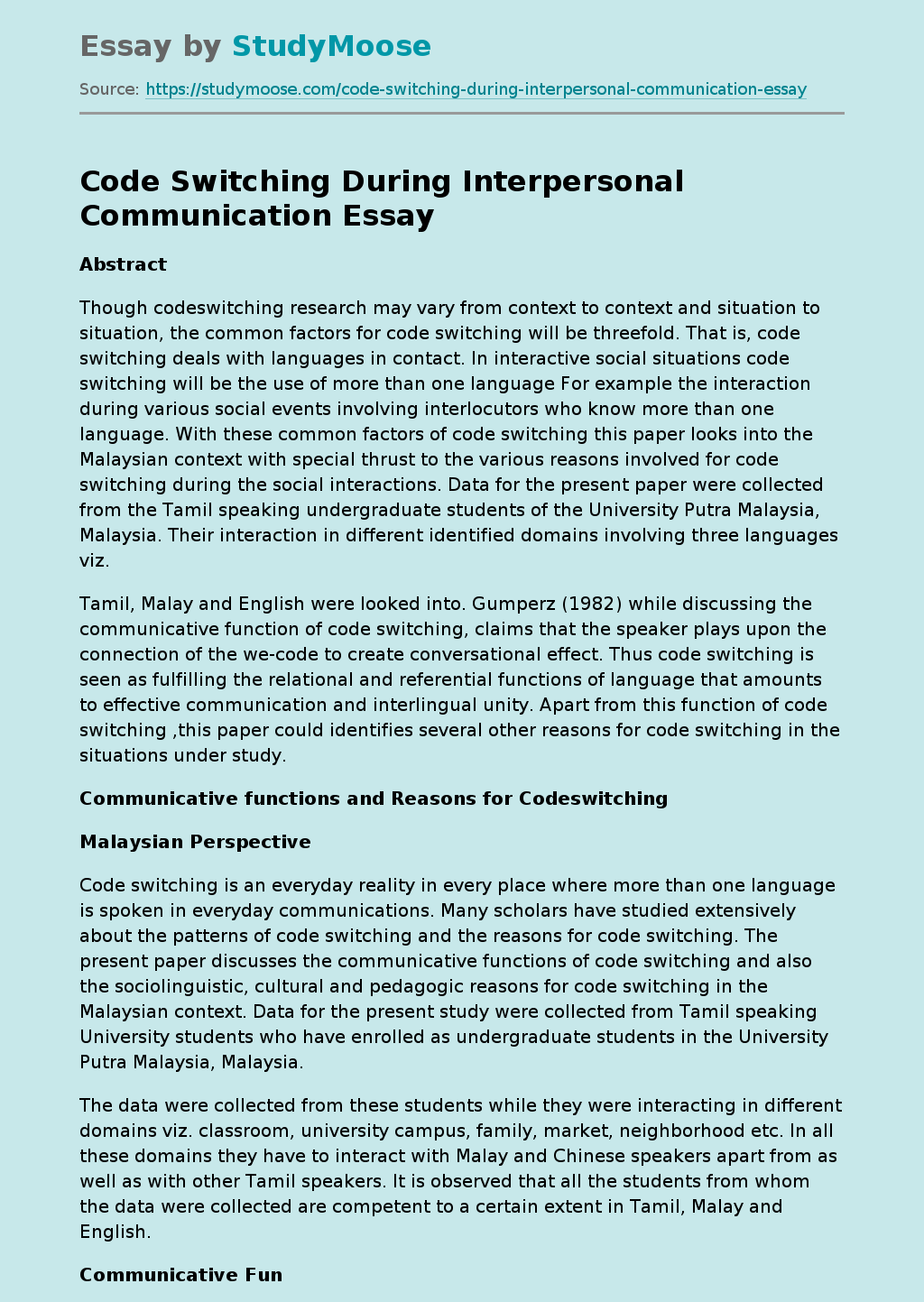