Interpersonal communication reflection: When Harry Met Sally When Harry first meets Sally, they look really different. From the very beginning scene, they argue as they have different perspectives on the opposite-sex friendships. Nonetheless, they eventually become good friends after they self-disclose their intimate information to each other. However, after their unexpected sex, their relationship becomes awkward. In the end, Harry finally finds out that he loves Sally and reveals his feelings. Over the course of their relationship in the movie When Harry Met Sally, Knapp’s stages of interpersonal communication develop and change.

Don't use plagiarized sources. Get your custom essay on
“ Interpersonal Communication ”
Get custom paper
NEW! smart matching with writer

Knapp defines the stage of initiation as conversation openers. Harry and Sally encounter each other in an unpleasant way. Sally finds him kissing his girlfriend. Obviously, they are not interested in each other at first as Harry has a girlfriend and Sally is a good friend of her. As a result, they do not really greet in the car. Sally tells Harry that they are just carpool partners.

While driving to New York City, they discuss about opposite-sex friendship. This scene falls into the experimenting stage. From this scene, Harry and Sally get to know better of each other’s different characteristic. Harry thinks that it is impossible to establish a true opposite-sex friendship because sex part always gets in the way. Sally argues him that she does not have sexual interest to her male friends. One of Knapp’s four purposes of experimenting stage is that it can be an audition for a future friendship or a way of increasing the scope of a current relationship.

After five years, they meet in the airport and take same plane. At this time, Harry is going to get married and Sally is in a relationship. When Harry asked Sally, she refuses to have dinner with him. Another five years later, they meet in the book store. Both of them are not in the relationship anymore. As they share the news, their relationship starts in the experimenting stage again. At this time, they are really getting closer and their relationship proceeds further. Self-disclosure plays a major role in the development of their relationship. When they met at the airport, Sally did not want to talk to him. However, when they met in the bookstore, they disclosed their intimate information, Sally’s breakup with her boyfriend and Harry’s separation, to each other. They could understand each other as they shared their feelings and wounded hearts. From this point of view, Self-disclosure really helped their relationship to develop further. However, their relationship jumps around to avoiding stage because they misunderstand their feelings toward each other. At New Year’s Eve party, Harry dances with Sally. Until this point, they are really good friends to each other. Eventually, they find out themselves in a relationship mood. However, being a good friend to each other makes them hesitant as they do not want to lose each other. Later the movie, Sally asks Harry to come over her house because her previous boyfriend is getting married. They suddenly have unexpected sex and they feel uncomfortable. Sally does not want to spend time with him anymore as sex part really gets in the way and it is hard for them to be friends again. Sally keeps trying to avoid him afterward. Finally, their relationship develops to the bonding stage. Harry goes through difficult times as Sally tries to avoid him. During this hardship, Harry realizes that he loves her. He reveals his feelings at the New Year’s Eve party, and Sally accepts him. Their relationship becomes official as they get married. Overall, it was hard for me to exactly identify the Knapp’s stages of interpersonal communication from Harry and Sally’s relationship throughout the movie. Since their relationship does not develop in a typical manner, going back and forth, it also does not follow the Knapp’s stages of interpersonal communication. Nonetheless, I really think that the film is very well made because it clearly shows how man and woman have different perspectives. After watching this movie, I personally think that being honest is the answer for any relationship. 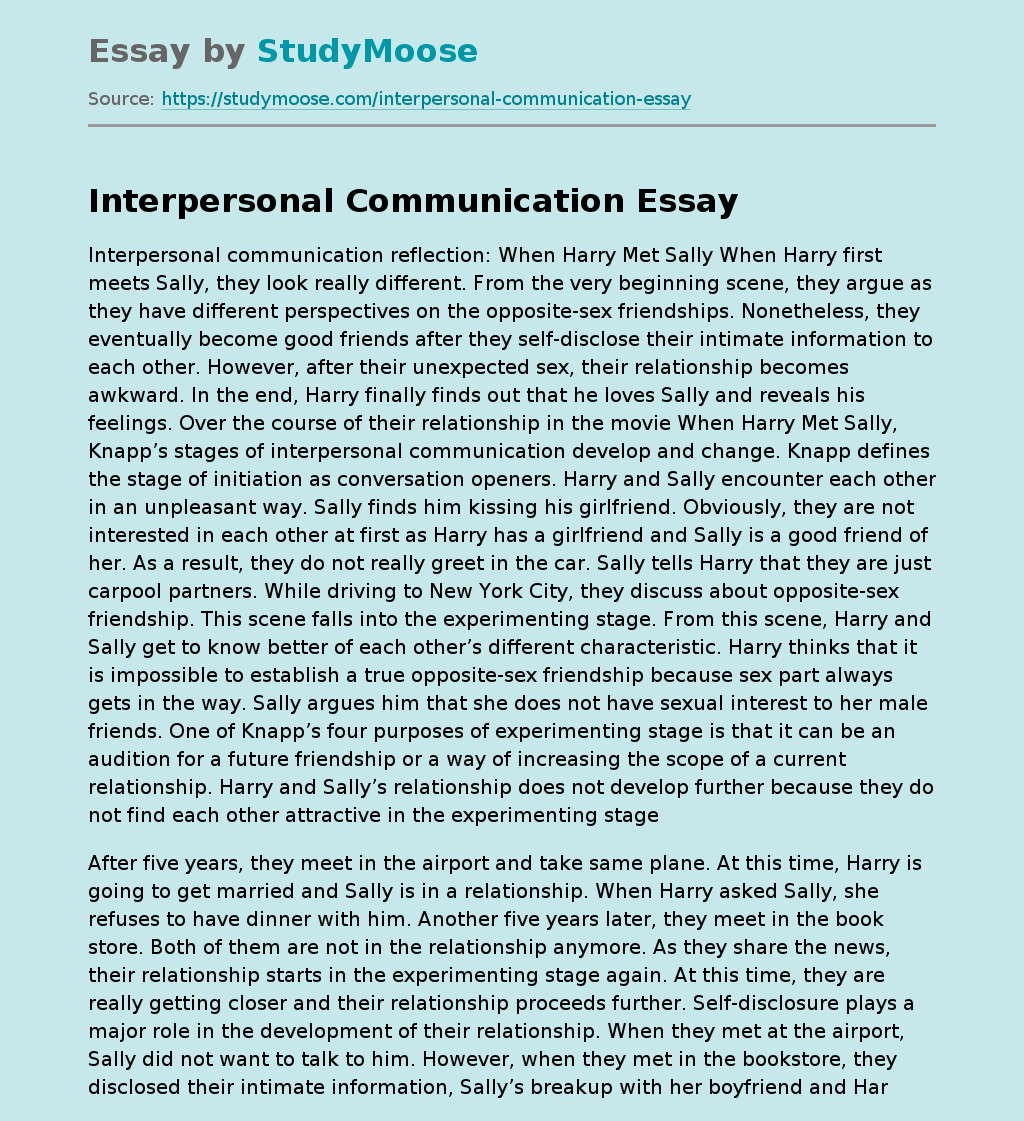