Quantitative interpersonal communication is described as any communication between two individuals, whether it is between two friends or simply two strangers that are only interacting for a matter of seconds. It is defined by the number of people in the interaction that is taking place. An example of this type of communication might be two people passing each other on the street and saying “Good morning” or “How do you do?”. They may be that brief, or they may be a continuing occurrence, say between a student and his or her teacher.

Don't use plagiarized sources.
Get Your Custom Essay on Quantitative Versus Qualitative Interpersonal Communication Just from $13,9/Page

The two may spend an entire school year together and never speak again in their lives.

The other definition is called qualitative. This interaction also takes place between two people, but is defined by its six separate factors, rather than the number of people involved. Qualitative communications must be unique, irreplaceable, interdependent, involve disclosure of personal information or feelings, have intrinsic rewards, and be fairly scarce. These types of communications are said to happen only five times in a lifetime, although I think it would be more accurate to suggest that an individual has only five qualitative relationships at any given time.

A person may have a qualitative relationship with a family member, best friend, significant other, or any person they enjoy spending time with and would like to continue to be involved with.

I personally believe that the qualitative, rather than the quantitative description better represents the definition of interpersonal. The word “inter” implies that the communication taking place is close to home, or has an effect within a person. “Personal” says to me that the communicator has time, emotions, and interest tied into the communication that is taking place. If two people meet for the first time at a cash register, talk for a total of two minutes, and go on their way, they are likely never to see each other again. No matter how polite the interaction, neither of the communicators has been significantly affected; in fact, they are probably going to forget that the exchange even took place.

To me, there is nothing internal or personal about this. Qualitative interactions, on the other hand, usually have a lasting effect on both parties. When two people are dating, they develop unique rules and roles, their moods affect each other, and they share information with each other that they may not share with anyone else. They are both looking for and hopefully receiving a sense of fulfillment, and if they were to discontinue the relationship for any reason, it would be extremely rare to find one with the same qualities. The end of the relationship would be considered a loss, and to me, that makes it interpersonal. 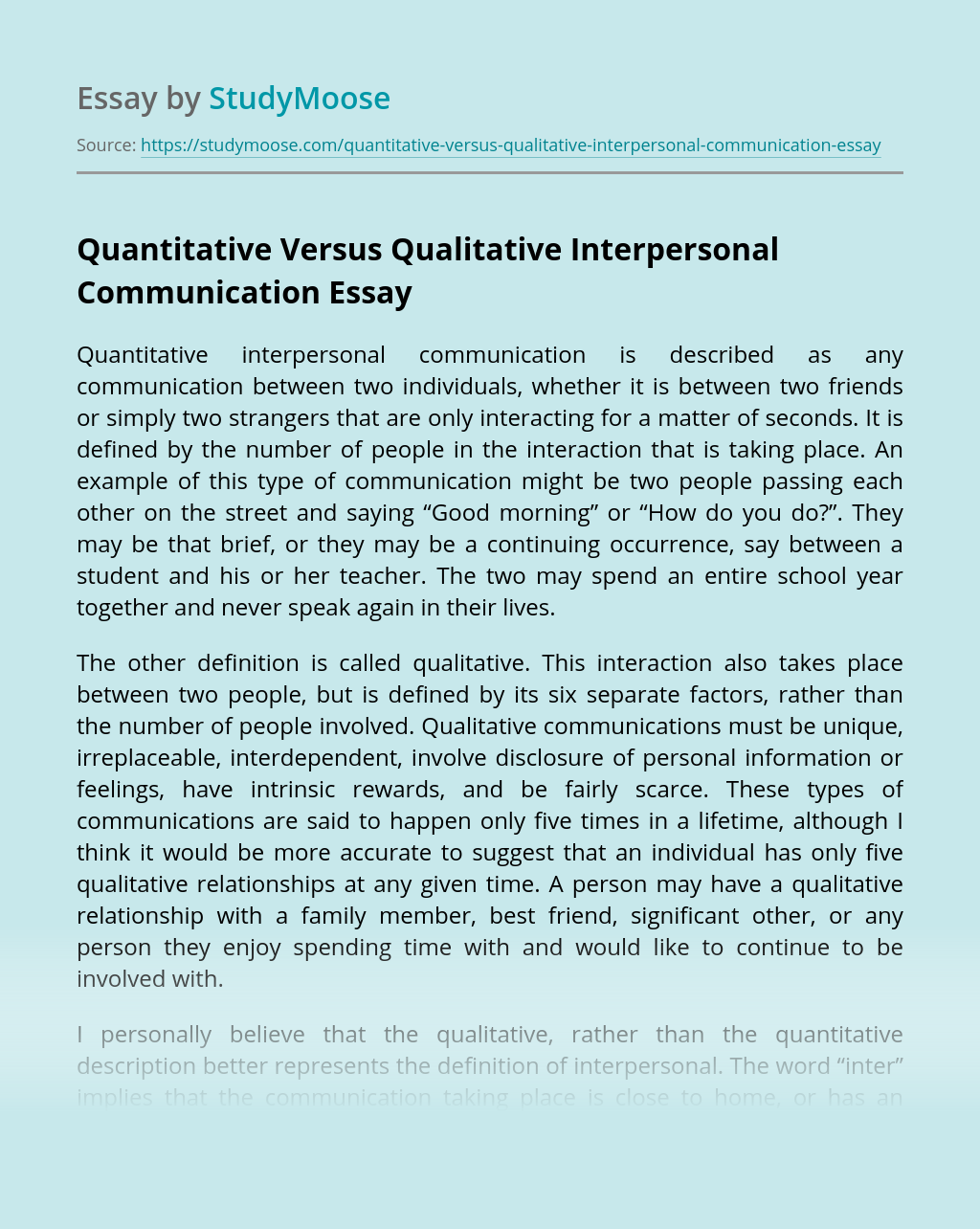 1. Conference calls This function allow us to have a conversation with more then one person. This would be use when managers want to talk about important subject with other brunches. Transfer This function allow to transfer caller to another department. It can be used when we the caller want to speak with the manager or... VIEW ESSAY

Introduction The synthesis of Acetaminophen is based on the amine group of p-aminophenol being acetylated by acetic anhydride to form an amide functional group. Acetaminophen is isolated as a crude solid which is then recrystallized to purify the product. Using melting point determination the recovered products purity is identified and can be compared to the... VIEW ESSAY

a.Mass communication enables you to communicate information to large numbers of people in a relatively short time. .Identify the principles of interpersonal transactional communication a.First principle – You cannot NOT communicate. i.Each day we receive thousands of behavioral cues to communicate. We choose which are worthy of our attention. We interpret or attribute meaning to... VIEW ESSAY

Alice Munro’s “Walker Sibling’s Cowboy,” told from the point of view of girl, focuses on the storyteller’s initiation into a world that leaves her confused, uncertain of what she understands, how she has come to understand what she knows, and how steady her knowledge is of the world she moves in. This sense of confusion... VIEW ESSAY