Many themes are evident in King Lear, but perhaps one of the most prevalent relates to the theme of justice. Shakespeare has developed a tragedy that allows us to see man’s decent into chaos. Although Lear is perceived as ‘a man more sinned against than sinning’ (p.62), the treatment of the main characters encourages the reader to reflect on the presence or lack of justice in this world. The characters also vary in their inclination to view the world from either a fatalistic or moralistic point of view, depending on their beliefs about the presence or absence of a higher power.

Turn in your highest-quality paper
Get a qualified writer to help you with
“ Justice in “King Lear” ”
Get high-quality paper
NEW! AI matching with writer

The theme of justice in relation to higher powers can be illustrated from the perspective of King Lear, Gloucester, and Edgar. When reading King Lear, it is helpful to understand the Elizabethan ‘Chain of Being’ in which nature is viewed as order. Rosenblatt (1984) states that there was a belief in an established hierarchy within the universe. Everything had its own relative position beginning with Heaven, the Divine Being, and the stars and planets which are all above.

On earth the king is next, then the nobles, on down to the peasantry. Holding the lowest position were the beggars and lunatics and finally, the animals. Interrupting this order is unnatural.

King Lear’s sin was that he disrupted this chain of being by relinquishing his throne. By allowing his daughters and their husbands to rule the kingdom, the natural order of things was disturbed. His notion that he can still be in control after dividing the kingdom is a delusion.

According to Elizabethan philosophy, it would seem that this is the beginning of his mistakes and is also the cause of much of the misfortune that occurs later on in the play. Chaos rules the unnatural. As well, King Lear makes another devastating mistake which affects his relationship with his daughters by asking them to tell him how much they love him in order that he may divide his kingdom according to the strength of their love. Cordelia, the youngest daughter, states that she loves her father ‘according to her bond’ (p.4). She is saying that she loves him as much as any child could love a father. On the other hand, Goneril and Reagan easily speak the words that their father wants to hear, rather than the truth. Because Lear is not satisfied with Cordelia’s response, he turns his back on Cordelia and on her love. By doing this he is destroying the natural family unit and lacks the insight to know this. He unjustly punishes Cordelia by banishing her from the kingdom.

He casts out his daughter in an unfatherly fashion, yet is gravely upset by the ingratitude of his other two daughters, Goneril and Reagan. Once again, due to Lear’s lack of wisdom, he fails to recognize the sincerity of Cordelia’s words. Thus, he puts his relationship with his daughters in jeopardy which results in a constant source of grief for King Lear. King Lear holds firm to his belief that the world is governed by the gods and in justice. Therefore he does not question the will of the gods in letting him suffer from his daughter’s unkindness, but prays If it be you that stirs these daughters’ hearts Against their father, fool me not with so much To bear it tamely; touch me with noble anger (p.50).

Greer (1986) reminds us that Shakespeare uses the word ‘nature’ often, but rarely with the same meaning. For instance, Lear personifies nature when he calls Cordelia ‘a wretch whom Nature is ashamed/Almost to acknowledge hers’ (p.9). Here, it seems as though Lear thinks himself to be particularly special and close to nature because he is presumptuous in believing that he can read Nature’s mind. On the same note, Lear also seems to order his goddess, Nature, as though he is in control. He commands Nature to follow his orders, Hear, Nature, hear! dear goddess, hear! Suspend thy purpose, if thou didst intend To make this creature fruitful (p.29).

Therefore, Lear is once again disturbing the order of things by putting himself above the gods. Lear disturbs the Chain of Being, unjustly punishes Cordelia and misinterprets his role in life by assuming himself to be the lord of creation. For these ‘sins’ he is punished when Goneril and Reagan turn on him and Cordelia dies. Thus, it would seem that justice is served. However, Holloway (1961) suggests that Lear suffers more for his ‘sins’ than seems reasonable. Holloway sums up this concept as follows: ‘the world can be to mankind, and has been to Lear, a rack: a scene of suffering reiterated past all probability or reason’ (p.506). Gloucester plays a parallel role to Lear in the play. He is elderly, gullible and taken in by his children. Again, the natural unit of the family is disturbed for Gloucester has a bastard son who is his downfall. However, unlike Lear, he is not weak and infirm and is more good- natured and brave. Like Lear, Gloucester makes reference to Nature. However, Greer (1986) feels that Gloucester views Nature as neutral and sees it existing only for man’s benefit:

These late eclipses in the sun and moon portend no good to us. Though the wisdom of nature can reason it thus and thus, yet nature finds itself scourged by the sequent effects (p.15). Rather than blame Nature, Gloucester is aware that his problems are a result of his own foolishness. He does not feel that the gods are necessary to explain Edmund’s treason or Cornwall’s brutality. However, he does make clear his belief that the gods are not interested in the affairs of men: As flies to wanton boys are we to the gods. They kill us for their sport (p.82). Although it may seem as though he is an atheist, Frye believes otherwise: Gloucester is not atheist: he postulates gods, divine personalities, and if he replaces them with a mechanism of fate or destiny he couldn’t ascribe malice to it. What he feels is that there is some mystery in the horror of what’s happened to him that goes beyond the tangible human causes’ (p.111). It is true that Gloucester has been lustful and has fathered an illegitimate son as the consequences. Since this, too, is an unnatural act, it seems justice must be served to restore order. However, to what degree is Gloucester responsible for Edmund’s evil behaviour? And was it just that Gloucester’s eyes were poked out by Goneril and Reagan? This leaves one wondering whether or not justice was served as Gloucester dies at the end of the play.

The punishment would seem to exceed the crime. Edgar is Gloucester’s legitimate son who is in danger of losing his right to his inheritance. At first, he is the good and dutiful one. At times he is gullible and naive when responding to his illegitimate brother Edmund, who tries to take his birth-right. Edgar is the moralist in this play. When he reflects on his own undeserved troubles and the suffering of others, there is a religious tone. He has faith in the gods and their justice, and is quick to give the ‘higher powers’ the credit for what happens to men. Thus, he says to Gloucester, who believes he has fallen from the edge of a cliff: Think that the clearest gods, who make them honours Of men’s impossibilities, have preserved thee (p.96). And thus he points out the justice of the gods in punishing Gloucester by the hand of Edmund: The gods are just, and of our pleasant vices Make instruments to plague us (p.119). Edgar believes that there is order in nature. He thinks that there is a natural ebb and flow in human fortunes, meaning that even the worst situation can become better (Greer, 1986). He believes in the Wheel of Fortune and if he is at the bottom of the wheel, his fortune will improve as he moves upward: To be the worst, The lowest and most dejected thing of fortune, Stands still in esperance, lives not in fear.

The lamentable change is from the best; The worst returns to laughter. Welcome, then, Thou unsubstantial air that I embrace! (p.81). However, he comes to realize that this belief is not necessarily so. When he finds his father blinded, it becomes obvious that this suffering is renewed: The worst is not So long as we can say ‘This is the worst’ (p.82). Greer (1986) comments that it may seem that nature is indifferent to the fate of any individual. Edgar differs from Gloucester in that he takes a moralistic point of view. Frye suggests that while Gloucester ‘feels that there is some mystery in the horror of what’s happened to him that goes beyond the tangible human causes…Edgar…looks for human causes and assumes that there are powers above who are reacting to events as they should’ (p.111).

In Edgar’s case it seems that he has received his just reward. He does not have an easy time when dealing with his brother, Edmund. Yet, it would seem that justice is served as Edgar regains his proper position in the natural order of things. In King Lear, each of the characters discussed have varying interpretations of the importance of the higher powers affecting their fortunes. As well, justice is handed out in different degrees. In the eyes of the characters, Shakespeare succeeds in illustrating the universal conflict that members of society have always had in understanding their fate in this world. 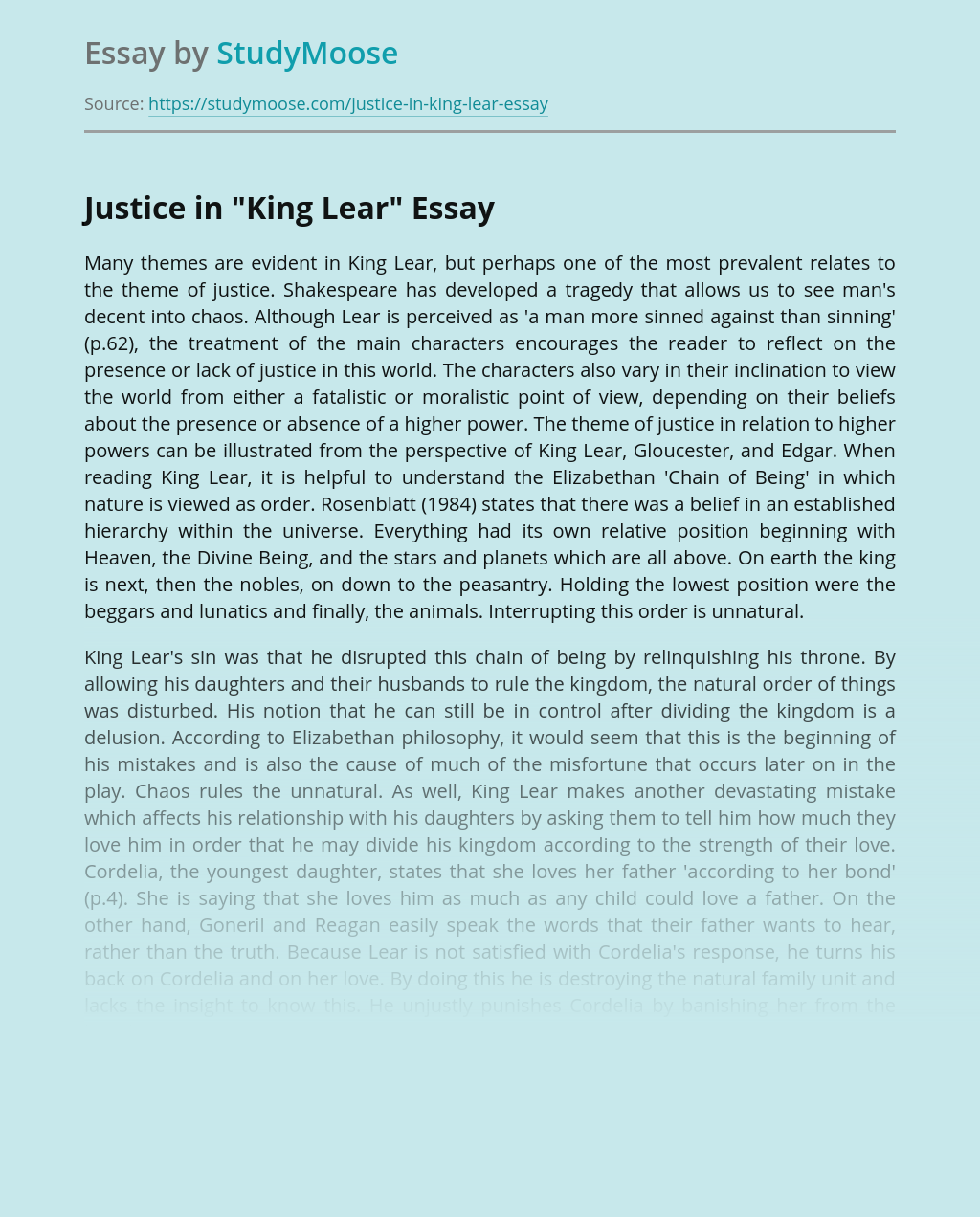 Turn in your highest-quality paper
Get a qualified writer to help you with
“ Justice in “King Lear” ”
Get high-quality paper
Helping students since 2015
Stay Safe, Stay Original