Betrayal and Revenge in Medea

In his quest for the Golden Fleece, Jason elicits Medea, a women known for her supernatural powers. Shortly after, they marry. Yet, after all Medea does for Jason-including killing her own brother-he decides to leave her and marry the Corinthian Princess to increase his own wealth and status. Thus, to avenge her husband for his betrayal, Medea kills the princess and the children she herself had with Jason, thus ensuring his complete downfall.

Upon hearing of the sacrifice of the children and the murder of his bride-to-be, Jason expresses the extent of his devastation and hatred towards Medea.

Don't use plagiarized sources. Get your custom essay on
“ Betrayal and Revenge in Medea ”
Get custom paper
NEW! smart matching with writer

In this passage from Euripides’s Medea, Euripides reveals both Medea’s cruelty and ruthlessness and the effect of her revenge on Jason-his complete destruction. In addition, Jason’s reference to Medea’s earlier transgressions reveals that he doesn’t fully grasp what Medea gave up for him. Although Medea’s actions will never be justified, Jason’s reaction throughout the play, and specifically in this passage, allows the reader to feel some small measure of sympathy towards Medea.

Throughout the play, Jason characterizes Medea as cruel and merciless. This is ironic because these are the same traits that made life and success possible for Jason when he first met Medea. Yet, throughout the passage, Jason characterizes Medea as less than human. For example, he refers to her as a “hateful thing” and “an evil thing”(43). He even goes as far to call her “a monster not a woman, having the nature wilder than that of the Scylla in the Tuscan sea”(43).

By referring to Medea as the Scylla-a vicious monster in the Odyssey -Jason reveals the extent to which he sees Medea as cruel and even inhuman.

Jason also reveals the degree of Medea’s cruelty by describing her as “loathed by the gods” and “all of mankind”(43). In addition to revealing Medea’s cruelty, these phrases suggest that Medea’s actions are horrible enough to become infamous among all humankind. Jason also comments that “there is no Greek woman who would have dared such deeds”(43). Such characterization sets Medea apart and magnifies the cruelty of her actions. However, Jason’s comment also shows how he views women in Greek society as frail and gentle. Otherwise, why wouldn’t he have said “there is no Greek that would have dared such deeds?” Cleary, Euripides uses Jason to reveal Medea’s callousness in her quest for revenge.

In the passage, Euripides also reveals Jason’s detachment and inability to grasp the significance of what Medea gave up for him. For example, Jason comments “you who have had the heart to raise a sword against your children, you, their mother, and left me childless-you have done this, and do you still look at the sun and at the earth, after these most fearful doings”(43). In these lines, Euripides points out Jason’s detachment and disgust. Jason continually repeats the word “you,” suggesting that he believes that everything was Medea’s fault, that her actions were unprovoked. As seen in the line “you have done this,” Jason lays all blame on Medea for the murder of his children and his prospective bride. Clearly, Jason doesn’t fully grasp what Medea gave up for him.

Although there are no justifications for her actions, Jason is partly to blame for instigating the conflict. Furthermore, Jason describes Medea as “a traitress to [her] father and [her] native land” and describes how she “slew” her own brother. These lines reveal Jason’s disconnect. When she killed her brother, Medea saw her actions as necessary to help Jason, her true love. Thus, she sacrificed the acceptance and love of family for the love and acceptance she received from Jason. Not only does Jason’s inability to recognize Medea’s sacrifices in this passage reveal his disconnect, but it also reveals his selfishness.

Regardless of whether Jason is deserving of Medea’s revenge, he is left completely devastated and without hope for the future. For him, there is little to live for. In fact, he tells Medea “for me remains to cry aloud upon my fate, who will get no pleasure from my newly wedded love. And the boys whom I begot and brought up, never shall I speak to them alive”(44). Finally, he comments “oh, my life is over.” Thus, Medea fulfills her ultimate goal-ruthlessly punishing Jason for the pain he inflicted upon her.

Betrayal and Revenge in Medea. (2017, Nov 12). Retrieved from https://studymoose.com/betrayal-and-revenge-in-medea-essay 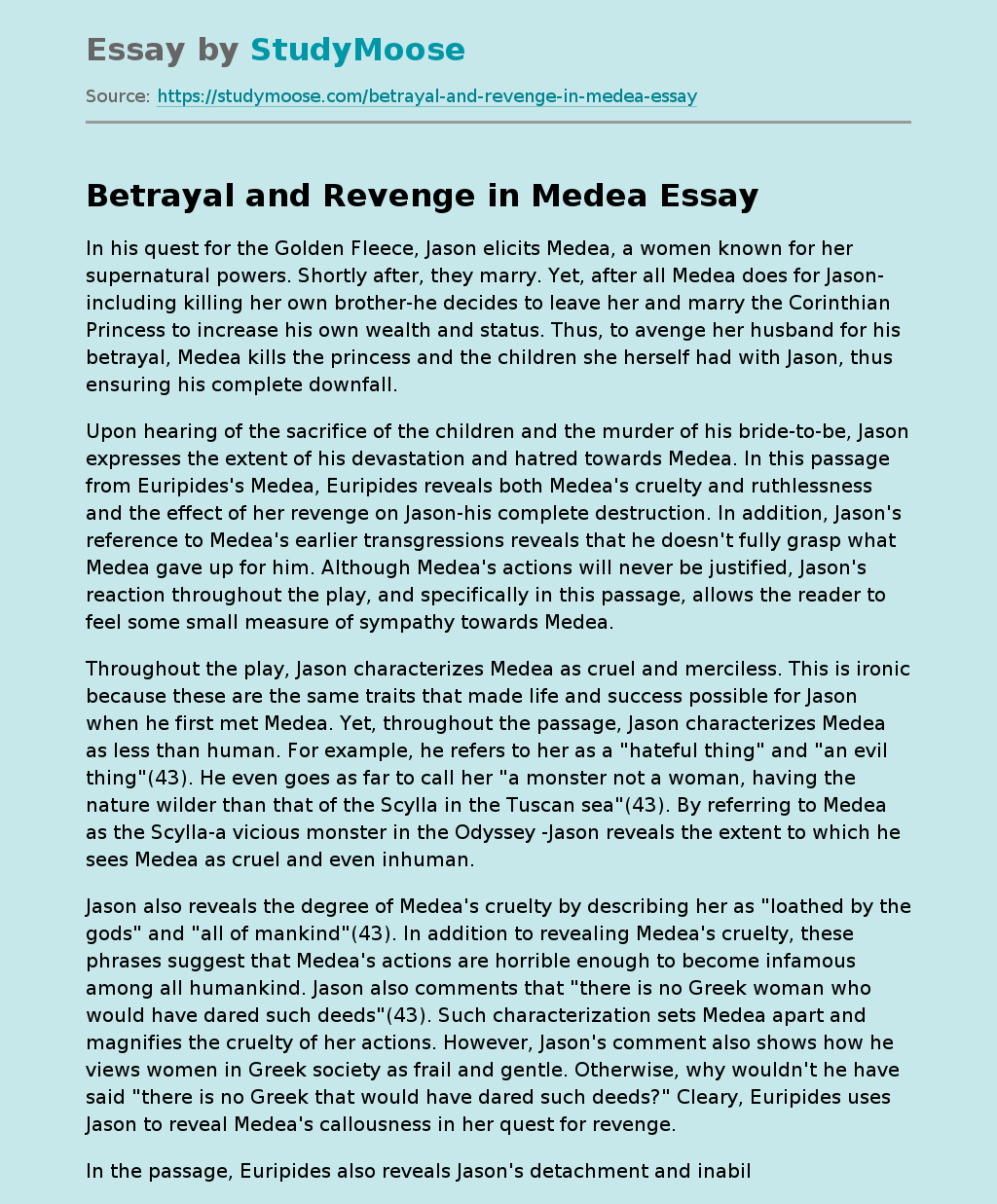