Betrayal and Loyalty to Revenge and Power in "Macbeth" Shakespeare

Shakespeare explores the themes of power through Lady Macbeth, as she demands spirits to summon up male traits, implores them to make her remorseless, and encourages Macbeth to be manipulative and conniving.

Don't use plagiarized sources. Get your custom essay on
“ Betrayal and Loyalty to Revenge and Power in “Macbeth” Shakespeare ”
Get custom paper
NEW! smart matching with writer

Being a female herself, Lady Macbeth commands the sprits’ to unsex [her] here, ‘ so she can rid herself of her female traits so she can be more male and thus powerful enough to commit evil.

Continuing to talk to the spirits, Lady Macbeth asks to be further transformed, when she wants her milk’ to be taken for gall’. Lady Macbeth would rather have her life-giving breast milk replaced with a vile substance that brings bitterness and death.

In a sense, she would like to become death incarnate. In addition, Lady Macbeth thinks that both unsexing herself (and thus making herself more male) and transforming her fluid to poison will make her more prone to killing, thus making her a powerful threat.

Lady Macbeth, moreover, wants to make herself even more powerful by invoking the spirits to make thick [her] blood.’ As blood, veins, arteries, and the heart make up the circulatory system, they act as a symbol of one’s sensitivities and empathy for others.

By asking for her blood to be thickened, Lady Macbeth asks to become less sensitive and more remorseless, thus making her more resolute in her schemes to kill.

In other parts of the play, Lady Macbeth exhibits her power by being manipulative, conniving, and persuasive. In act 1 scene 5, for example, she wants to manipulate Macbeth, when she wants to pour [her] spirits in [Macbeth’s] ear [and] chastise with the valour of [her] tongue, ‘ indicating that she wants to pressure Macbeth to do her tidings. This manipulation is also apparent when she convinces Macbeth that the sleeping and the dead are but as pictures’ in attempt to dehumanise the sleeping so as to make the task of killing them that much easier.

In addition, Lady Macbeth questions Macbeth’s masculinity in many parts of the play, for example Act 3 scene 4, when she asks him, Are you a man?’ She does this to taunt and belittle Macbeth, hoping that such taunts will force Macbeth to complete her evil machinations.
By asking to be more male, by asking to be filled with direst cruelty, ‘ by asking to become more remorseless, and by being utterly manipulative and pushy, Lady Macbeth is presented as a multi-faceted, powerful woman capable of thinking and masterminding death and evil.

Betrayal and Loyalty to Revenge and Power in "Macbeth" Shakespeare. (2020, May 13). Retrieved from http://studymoose.com/betrayal-and-loyalty-to-revenge-and-power-in-macbeth-shakespeare-essay 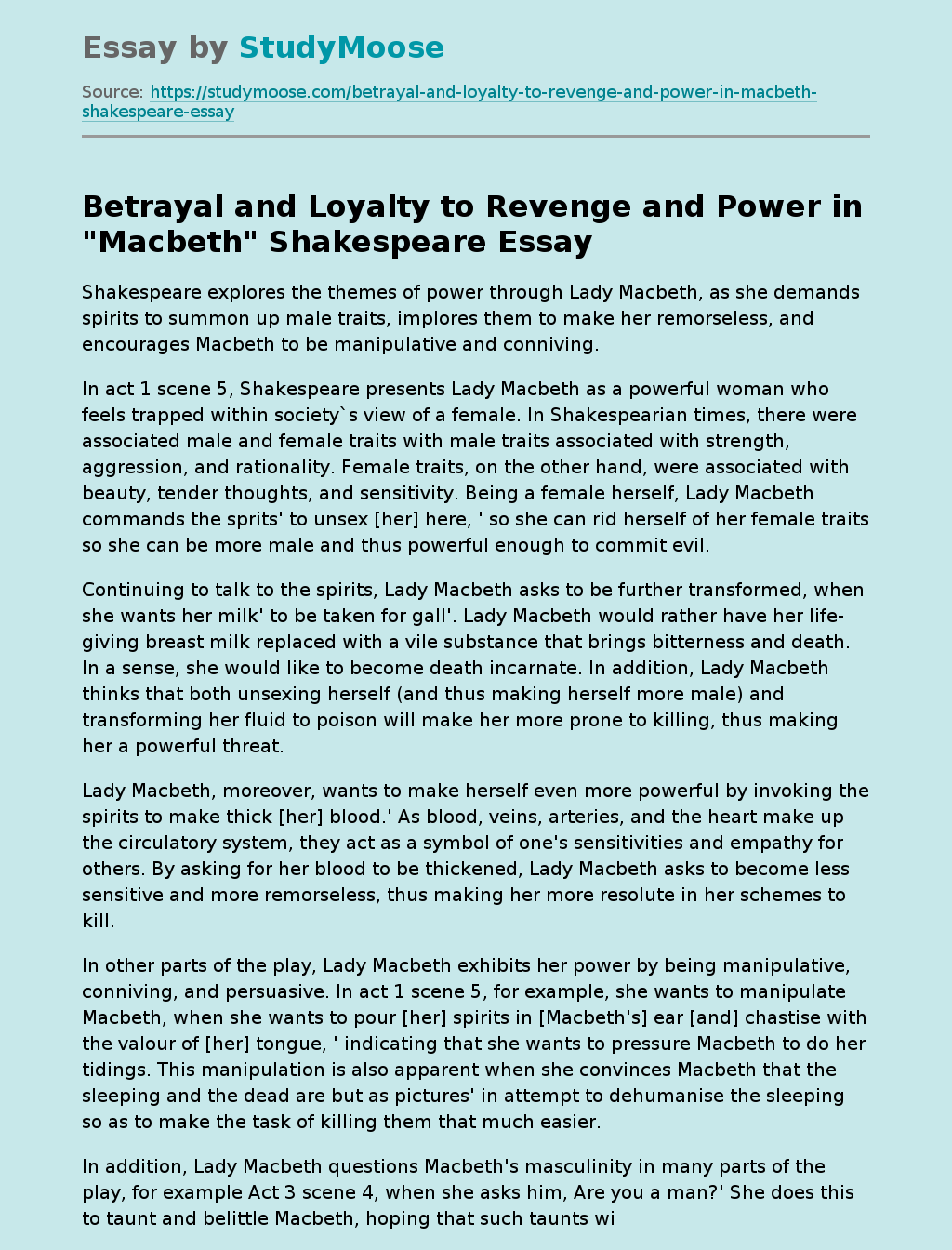