Is Medea a villain or a victim?

In the Medea, Euripides balances the reaction of moral repellence at the isolated act of Medea’s infanticide with an examination of her motives in an attempt at justification, forcing the audience to re-examine their own conceptions of morality through the lens of Medea’s actions. The antithesis formed between the gravity of Jason’s offences and the abhorrence of Medea’s reaction is the main criterion by which to judge the weight of each character’s wrongdoing.

Every offence committed in the play both within and external to the text is performed by Jason or Medea and causes direct harm to the other; Jason is a victim whilst Medea is a villain & vice versa.

Don't use plagiarized sources. Get your custom essay on
“ Is Medea a villain or a victim? ”
Get custom paper
NEW! smart matching with writer

Initially, we can feel sympathy for Medea for being replaced by Glauce. Medea clearly resents Jason’s decision to take another wife, she comments “He has taken another wife, and made her mistress of my house”. The concept of the household is key to understanding the extreme anger Medea feels at her replacement.

She has already caused disruptions in two houses prior to the action in the play, but has judged these crimes to be worthy of her place in the household of Jason. The bitter irony, therefore, of her abandonment rests in the purposeful removal of familial ties which Jason seeks to affect on Medea when he delays to protest against her exile. We can therefore empathise with Medea in her choice of infanticide as the method by which to inflict not only the maximum emotional damage on Jason, but also the destruction of his ‘house‘.

In this way, the rejection which Medea feels is a justifiable and primary motivation for her revenge.

Medea conveys to Aegeus her desperation and talks to him about Jason’s infidelity as a primary reason for her distress “He wrongs me – Jason, never wronged of me”. In the prologue, Medea is described as being “mad with love for Jason;” her distress is genuinely rooted in the loss of her husband. In terms of what Medea has sacrificed to be with Jason, it is hardly surprising she feels so strongly about her replacement. Medea killed her brother, Absyrtus, in order to get away from Colchis. This rendered her an exile in her own homeland, something very precious which she sacrificed for Jason’s love.

Now to find that even those in her new home mistrust her is very upsetting for Medea, when she has only committed these crimes in pursuit of the love of the man who has now betrayed her. Jason is very ungrateful towards Medea, she saved his life on his quest for the Golden Fleece, and she has provided him with two sons, with whom Medea has now been burdened. Although Jason does not dislike his children, he has left them for Medea to look after. Medea has now become unaffectionate towards them, because they represent the life and family she and Jason shared.

It is difficult to exculpate Jason in this regard – he has let go of those to whom he should be most attached in favour of a younger, royal bride, and, when it comes to the exile of the children, Jason does not fight for them. Jason’s victimisation in the Medea is a product of his own disloyalty. When Jason decides to replace Medea with Glauce, he destroys Medea’s worth – she has been rendered useless by Jason’s actions, and she has ruined her own ‘house’ and family meanwhile. In his own defence, Jason claims that he was seeking to provide a better life for Medea and the children they share by marrying into royalty.

This excuse sounds contrived and unconvincing, however. Jason does not even fight to prevent his own children from being exiled – it is as though he would rather them vanish than provide a better life for them. When Medea plots to murder the children, she seeks to destroy the family line of Jason. By marrying somebody of a higher social status, Jason would dilute his own line if he should have children with Glauce, and he would become part of Creon’s extended family. Jason’s true bloodline lies in his sons. To deal the biggest blow, Medea strikes at the heart and continuation of the legacy of Jason’s house by killing his children.

Medea’s motivations for killing Creon and Glauce, however, run deeper. Just as Jason has ruined Medea’s entire family life, so does Medea seek to destroy his. By killing Glauce and Creon, Medea attacks the dream Jason has had of royal cousins for their two sons – ripping apart his desires and aspirations. This treatment is soul destroying for Jason, who loses both his children, future wife and father-in-law over the course of one day. However, we can argue that it is all a product of his mistreatment of Medea and te children they share.

If we then consider both sides of the argument, we can conclude that Medea’s actions, although harsh, were justified by Jason’s disloyalty and disregard for his immediate family. The audiences conception of morality is questioned, do we despise Medea for her actions, or respect her for her iron resolve to destroy Jason’’s house and life, as he has hers? Medea is certainly a victim, she has been humiliated by Jason, and disregarded and mistrusted as a foreigner in her new home. Jason is arrogant not to expect a backlash from her, and he pays dearly for his wrongdoings. 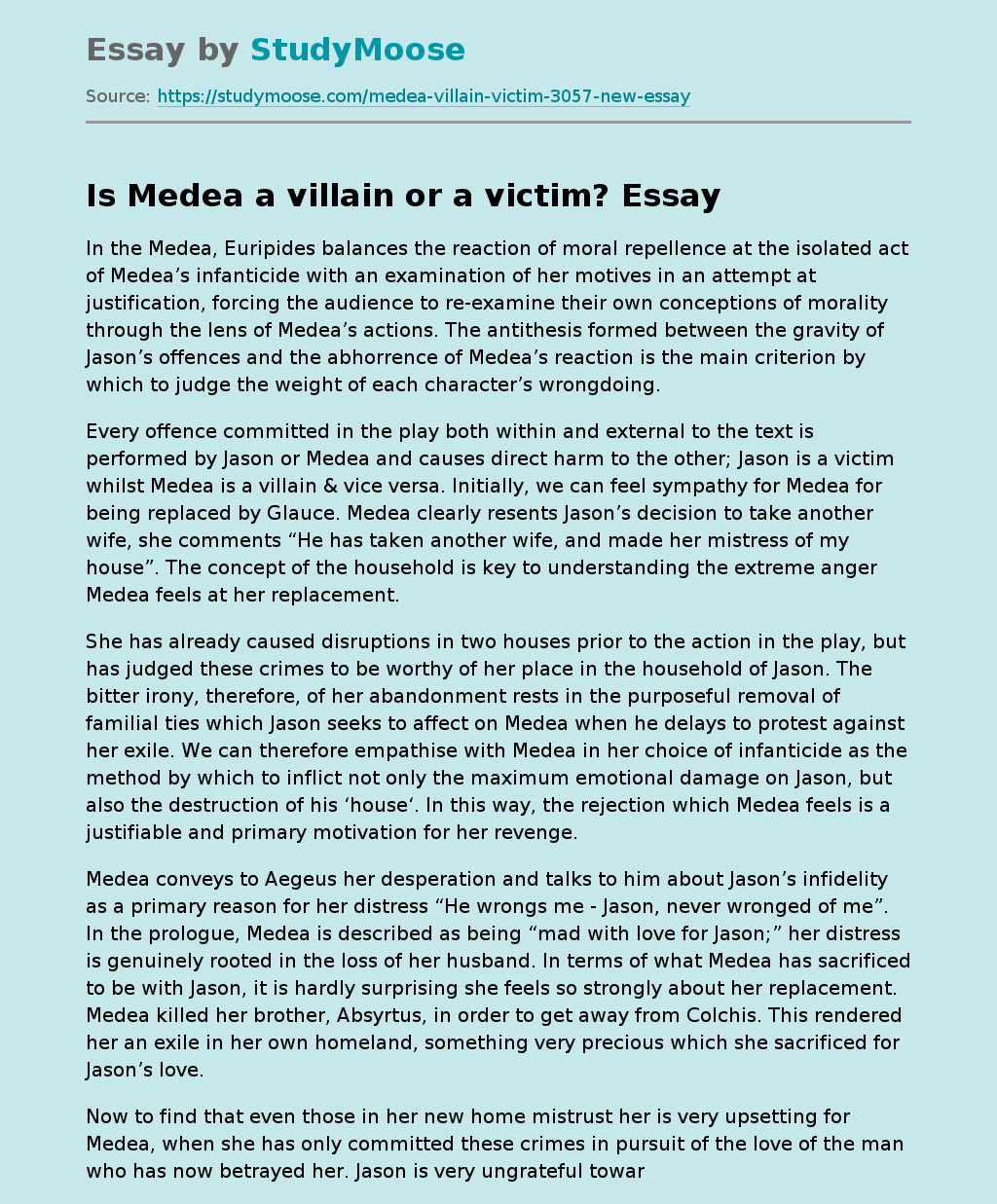