“Killings" by the Late Andre Dubus

“Killings” was written by the late Andre Dubus in 1979 (Dubus). According to the article “Andre Dubus,” often the characters that Dubus portray are in tense situations and “sometimes their frustration goads them to infidelity or acts of violence; more often, however, they simply become resigned to their lot” (Contemporary Authors Online par. 9). On the other hand, Matt revenge to committing his murder, which showed loss and consequences are explored in Andre Dubus’s, “Killings”. A jealous husband, angered by the fact that his estranged wife is involved in a new relationship, acts out in a presumable crime of passion and murders the man she was seeing.

Don't use plagiarized sources. Get your custom essay on
“ “Killings” by the Late Andre Dubus ”
Get custom paper
NEW! smart matching with writer

As a result of this crime, a father suffers the loss of his son and plots retaliation, which results in the killing of his son’s murderer. His “id” was a very jealous husband that didn’t want his wife to be with another man, whereas on the other hand he cared and loved his family.

I feel like he didn’t want the sense of betrayal so he chooses to commit a murder. Both men experience a loss and subsequently act out in revenge. The difference in the moral character of these two men is what appears to determine the fate of their consequences. Richard Strout, a man of inferior morality, commits a crime of passion. He murders a man who is having a relationship with his estranged wife. Strout is portrayed in the story as being a spoiled, selfish, violent man. The pending divorce between he and his wife obviously left him feeling conflicted over the loss of control and he is angered by the fact that she was seeing another man so quickly after the separation.

There appears to be no feelings of regret or remorse from Strout after the murder. He seems to feel completely justified in the killing and even makes the statement, “He was making it with my wife” (Dubus). Strout’s lack of moral character is a key element in his being able to live with himself after committing this crime. His personal consequences seemed to be few, if any. Matt Fowler is portrayed in the story as being a man of great moral fortitude; he is a sensitive, loving husband, a protective father and a respected friend.

The brutal murder of his son catapults him into a position in which he feels compelled to avenge the death. The conflict that Fowler feels after his son is killed is overwhelming to him. Fowler feels that removing his son’s murderer from the world he and his family live in will ease his wife’s pain. His concern and compassion towards is wife is obvious when he says in the story, “She sees him all the time. It makes her cry” (Dubus). Killing Strout is the act of a protective husband and father doing what he believes to be the only practical solution and he views it as though he has a job to do.

Fowler is notably reluctant to carry out this act of premeditated murder. Not even a moment of satisfaction is allotted him after he completes the job of avenging his son’s death. Proceeding Matt accomplishes the mission he is immediately left with a profound sense of isolation; undoubtedly because of his high level of morality. The final words of the story indicate the loneliness he feels that he isn’t even able to share with his wife. “…he shuddered with a sob that he kept silent in his heart” (Dubus). Killing Strout is not the end of the pain for Matt Fowler; it may give him a sense of revenge, but he is still feeling so alone and hurt.

The other Fowler children are left to believe that their brother’s murderer has escaped trial and disappeared. Mrs. Fowler acknowledges this in the story when she says, “We can’t tell the other kids. It’ll hurt them, thinking he got away. But we mustn’t” (Dubus). This is yet another consequence of these murders. Frank Fowler and Richard Strout are dead, Matt Fowler will most likely feel forever isolated, and the lives of Ruth and the Fowler children have been deeply affected by these crimes.

Two very different men experience similar feelings of loss, revenge and consequence in this story. Both men commit an act of murder and both pay a high price in the end. One man’s sentence is death; the other’s is profound isolation. Neither life is left unaltered. This story is a lesson in passion, crime and morality.

“Killings" by the Late Andre Dubus. (2016, Nov 24). Retrieved from http://studymoose.com/killings-by-the-late-andre-dubus-essay 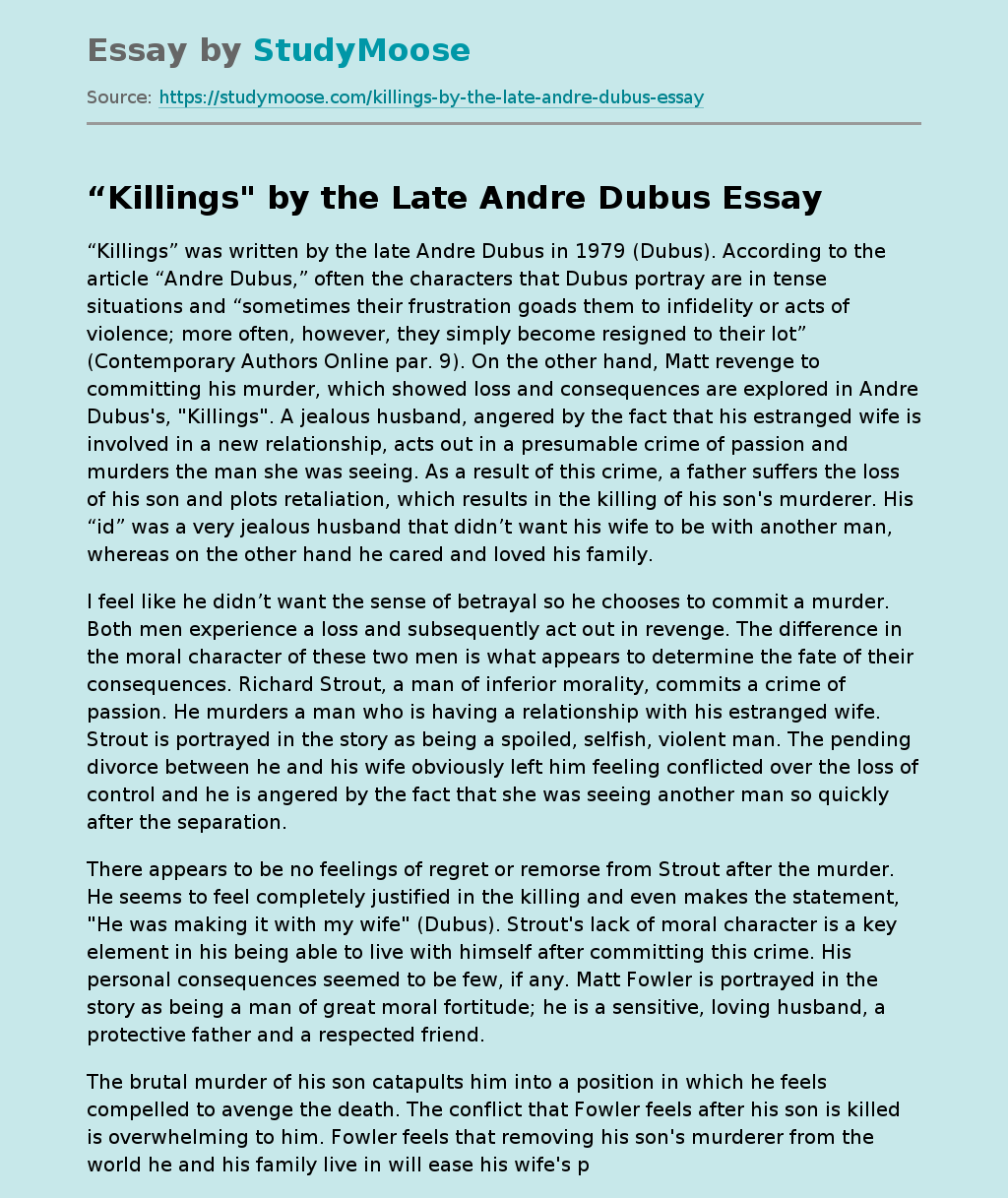