The play, Andre’s Mother, by Terrence McNally is a story about accepting death and is based in a story about a young man who died before telling his mother that he was gay; leaving the man’s partner to break the news and to inform the mother about how much he missed seeing her and his fear of being rejected by her, in the time before his death. The theme of this story is to live life everyday with no regrets.

Don't use plagiarized sources.
Get Your Custom Essay on Analysis of Andre’s Mother by Terrence McNally Just from $13,9/Page

Throughout the symbols and references you begin to understand the life of Andre.

The white balloon represents letting go and leaving a young man in peace. The silence of his mother shows that she never accepted his sexual preference. While Hamlet references the struggles of his everyday life. The white balloon in the play Andre’s Mother is a symbol of Andre’s soul. Cal speaks about the white balloons saying, “They represent the soul. When you let go, it means you’re letting his soul ascend to Heaven, that you’re willing to let go.

Andre is saying that the white balloons are Andre’s soul and that when you release them, you’re willing to let go of all the wrong and let him rest in peace. Penny, Cal’s sister, and Arthur, Cal’s dad let go of the balloon without hesitation. After releasing their balloons Cal reluctantly admits, “I’m not ready yet”(McNally 737). This is because Cal still couldn’t let go and still had regrets. The balloon being white represents purity. Letting go of the white balloon meant that after all that was said, Andre was now clear and pure again.

I believe that white balloon represented letting go of Andre and letting his soul rest in peace with no regrets and nothing left unsaid. Andre’s mother’s silence throughout the play proved to us she did not accept her son’s homosexuality. Cal tells Andre’s mother how much Andre missed her and longed for her acceptance. He gets finished with his rant and still no response from Andre’s mother. Cal gets mad and replies, “It’s bullshit. It’s all bullshit. [Still No response]” Her silence shows that she is not accepting of Andre’s sexual preference.

At the end of the play Andre’s mom with her own conflicts releases the balloon. The play write quotes, “He goes, Andre’s mother stands alone holding her white balloon. Her lips tremble. She looks on the verge of breaking down. She looks at it awhile before she gently kisses it and lets go of the balloon…” I believe at that point that Andre’s mother forgave her son and was willing to wipe the slate clean by releasing the white balloon and letting Andre’s soul rest in peace. Andre’s mother’s silence throughout the play shows that she never accepted her son’s sexuality.

Even though she wasn’t accepting she let her son rest in peace and let his soul ascend to heaven. Andre’s love of theater and the play Hamlet gave us an insight to his life. At the beginning of the play Cal expresses Andre’s love of theatre. Cal expresses, “God, how much he wanted to play Hamlet again. He would have gone to Timbuktu to have another go at that part. The summer he did in Boston, he was so happy! ”(McNally 736). This reference to Hamlet, I believe showcases the struggles Andre went through. Andre struggled with decision-making and avoiding things, as did Hamlet.

Hamlet struggled whether to avenge his father and struggled with the decision that he had been avoiding. This is also apparent when Cal brings up Andre’s great performance saying, “You should have come up the summer he plated Hamlet. He was magnificent”(McNally 738). I believe the Hamlet reference was to showcase Andre and his internal struggles. McNally uses strong a strong sense of symbolism throughout the story. First by holding a white balloon, the characters were holing a representation of Andre’s life and the memories that they each had of him.

By releasing the balloon, they were letting go of the sadness of his death and for some, the secret he’d been keeping from his family. This also represented the crossing over of Andre. In the story, Andre was afraid of being rejected by his mother, whose silence throughout the play proves that she was incapable of offering acceptance to his homosexuality. With Andre’s love of the theater and specifically Hamlet, he is relating himself to one of the most recognized internal struggles of the theater world. 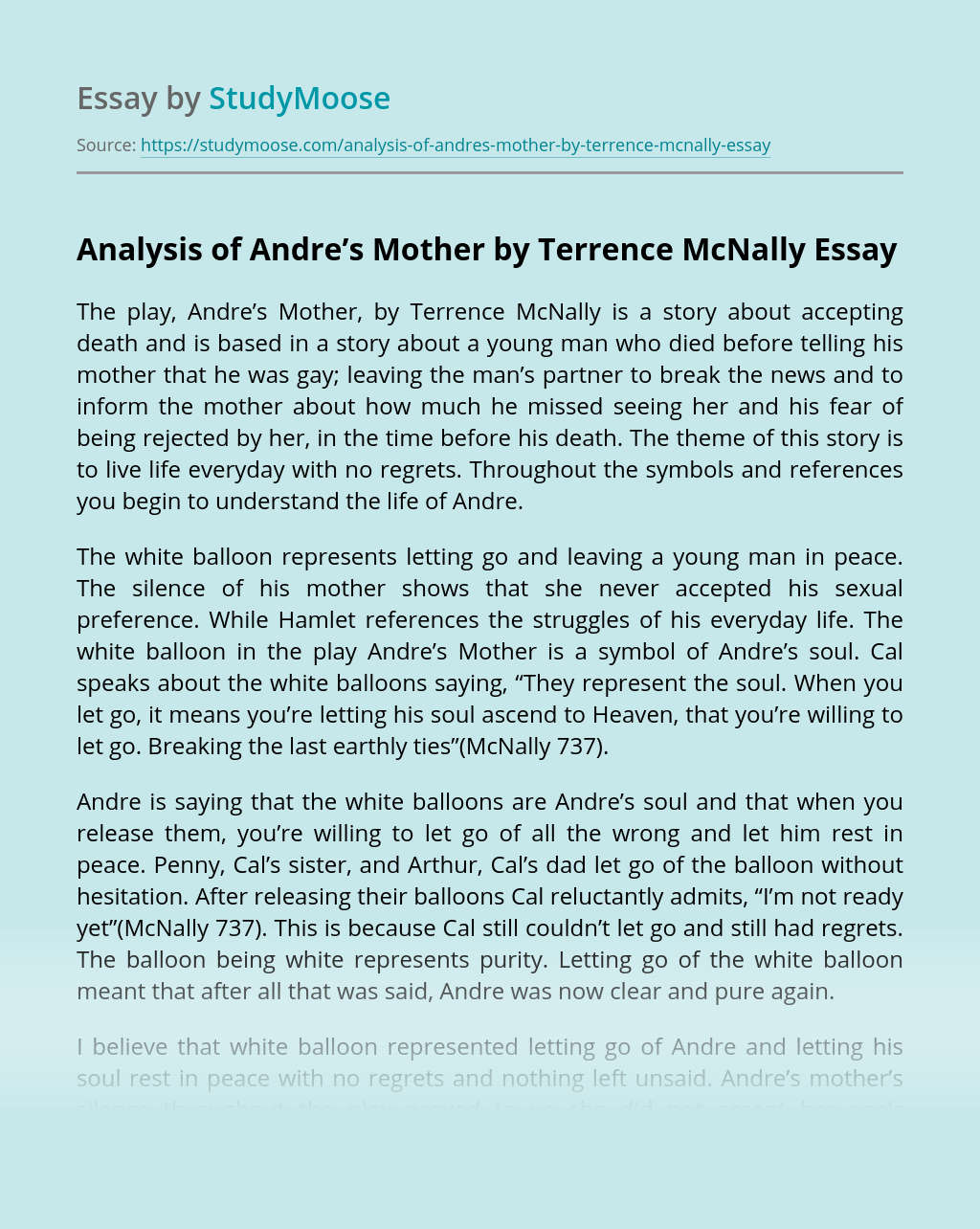