Praise Song for my Mother by Grace Nichols Analysis

What are the poet’s sensations about family and how does she communicate these ideas?

Grace Nichols writes Praise Song for my mother as ode, or letter, as an event of her mother. Having moved from Guyana to the UK, the ‘ode’ remains in a Caribbean design, applauding her mother for all that she has done. Nichols blogs about what family is, and what it implies to her, and the poem appears to be positive, in adoration of her mother, however there are likewise other perspectives that say the poem might have a much deeper, unfavorable meaning.

Don't use plagiarized sources.
Get Your Custom Essay on Praise Song for my Mother by Grace Nichols Analysis Just from $13,9/Page

Nichols conveys the effective, protective love that she gets from her mother in the poem in a range of methods. She writes that she was ‘water to [her], deep and vibrant and fathoming’. As water is a necessity to live, she develops the image that her mom was a necessity to her life, and that she ‘couldn’t live without her’.

She uses much of these metaphors, utilizing the term ‘You were’ to convey the various functions her mom played in her life, that although she was simply a female, she was to her, the ‘moon’s eye’ and the ‘dawn’.

Making use of the past tense in ‘you were’ reveals that her mom might have died, and that this is not only a celebration of her mother, but likewise a celebration of her mother’s life, which the poem is a sort of grieving of her mom. However, this can also be analyzed as the memories of her childhood, when she resided in Guyana with her family, composed in the past tense, to convey her feelings in the past. The fact that this poem is composed in 14 lines, as a sonnet, reveals the ode of love from Nichols to her mother, and the caring bond in family.

Nichols could also be trying to convey the message that family is about growing, and allowing the children to develop and learn. Although this at first sight, a poem of positivity, and ‘praise’ for her mother, there could be a more negative, possibly sarcastic side to the poem. The phrase ‘you were water to me’ initially seems positive, but when paired with ‘deep and bold and fathoming’, makes the reader think that there was possible ‘too much water’, and that Nichols’ mother was possibly overprotective or that she enveloped Nichols in her care. The words ‘deep’ and ‘bold’ make you think of the ocean, and possibly that she was drowning in it. In addition, Nichols writes ‘go to your wide futures, you said’. This initially strikes the reader as a message of hope from Nichols’ mother, that she wanted her children to go out into the world and grow. The fact that ‘futures’ is plural, shows that there is essentially a ‘world of oppurtunities’ available, rather than a controlled, decided future.

However, this may have been written as a sarcastic ‘you said’, showing that Nichols’ mother expected too much of them, and that life is actually much harder than going ‘out to your wide futures’. This resentment may be a product of Nichols’ mother being overprotective, and not allowing her to learn on her own, and being overprotective. It may also mean that her mother may have essentially abandoned her, and left her to her own actions after she left to England. However, given the circumstances, it is most likely written as possibly a memory of the last thing her mother said to her, before passing away, or before their relationship became too distant. In this way, there are many differing interpretations for this message.

Nichols seems to be conveying the message that family is a sort of nutrition, or nourishment. She uses lots of metaphorical language such as ‘You were water’ and ‘you were sunrise’ to make family seem like a very positive factor. She also writes ‘the fried plantain smell replenishing replenishing’, with the repetition of ‘replenishing’ making the reader focus on the word. The lack of punctuation in the phrase, and also the lack of punctuation throughout the whole poem possible harks back to Nichols’ less educated childhood.

The words ‘replenishing’, ‘water’ and ‘sunrise’ creates the image of the mother fulfilling all the bare necessities for the Nichols’, and shows the different roles that Nichols’ mother played in her life. The poem itself is very orderly for the first three stanzas, with same sized lines, but the fourth stanza is one line longer, this line being longer still, and then the fifth stanza being one line only. This poem could possibly portray a ladder or staircase, symbolising the ‘steps’ to adulthood and success. As the poem is about Nichols’ mother, this could be creating the image that her mother was the aid to her success. This is all the picture of how family is a sort of nutrition and aid to life.

Overall, Grace Nichols provides many different standpoints on the importance of family in ‘Praise Song for my Mother’. Although it is written as a positive poem of ‘celebration’ of her mother, there could also be more negative standpoints and alternative views, highlighting possible sarcasm in the poem. In conclusion, Nichols seems to generally have very positive views on family and uses lots of metaphorical language to create the image that her mother was ‘everything’ to her’. She also uses literary techniques to showcase her memories of childhood, and the importance of family in her upbringing.

Praise Song for my Mother by Grace Nichols Analysis. (2017, Nov 06). Retrieved from https://studymoose.com/praise-song-for-my-mother-by-grace-nichols-analysis-essay 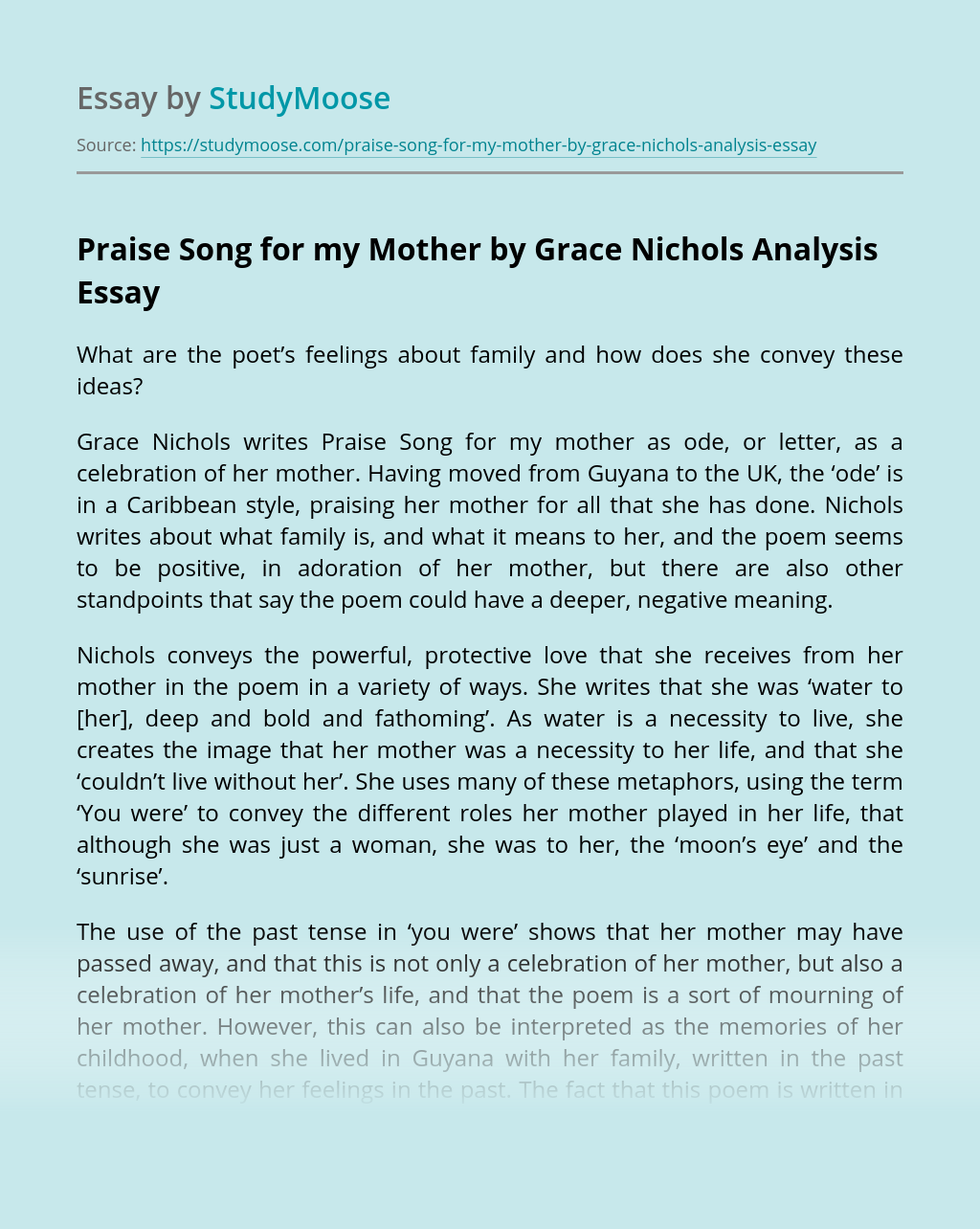 Rate this post Nichols has written a personal love poem to her mother which expresses a deep respect and admiration for her. In Armitages poem however, the tone is very different as the poet reflects upon the lack of communication between him and his father and recalls a moment when an opportunity to speak about...

Poems “Nettles” and Praise song for my mother”

Get Essay
Lorna Dee Cervantes: Beneath the Shadow of the Freeway

Rate this post The form of the poem is not easy to determine. It consists of six stanzas of uneven length, which are, except for the first and fifth, again divided into sub-stanzas. The meter is irregular as well as the length of the verses and there is also no rhyme scheme. Cervantes plays very...

Life Choise in The Choosing by Liz Lochhead

Rate this post “The Choosing” by Liz Lochhead is a poem which provides a really typical scenario and makes you think about deeper problems. The content illustrates 2 girls who unintentionally choose in school, unaware of repercussions, and, due to the fact that of them, wind up drifting off their separate ways since of such...

Rate this post What Parental feelings does McCarthy explore in the poem and how does she use language to present them to you? Football after school is a poem about a mothers, or the poets’, struggles in the harsh realisation of her son maturing, and having to experience school. Patricia is feeling powerless and worried...

How does Seamus Heaney reveal his culture in 'Digging' and 'Follower'?

Rate this post Seamus Heaney was born in Northern Ireland in 1939 to a working class family. Being the eldest of nine siblings wasn’t easy yet Heaney’s intelligence was highlighted when he won a scholarship to a catholic school at the tender age of twelve. He had an agricultural background and was raised on the...

Essay about Death of a Naturalist

Rate this post In the poems presented, the main theme of parent and child relationships can be clearly illustrated. For example, Catrin which is composed by Gillian Clarke emphasises the theme of how powerful the bond is between parents and children. This point can be clearly addressed as Clarke provides the perfect metaphor ‘Red rope...

One's experiences as a child and the recollections that are

Rate this post One’s experiences as a child and the recollections that are associated with this shape and control the identity and actions that they will exhibit and share with the rest of the world. Whilst Gwen Harwood constantly speaks of her childhood as radiant happiness, her move to Tasmania not only influenced change in...