How does Grace Nichols convey the life of the slave women in her poetry? Essay

Don't use plagiarized sources.
Get Your Custom Essay on How does Grace Nichols convey the life of the slave women in her poetry? Just from $13,9/Page

The use of the word ‘we’ in the poem shows just how many women had been captured and a gives a sense of empathy with the slave women. The sun in this poem is shown as a bad figure even though it gives life. To the slaves it is bad because it makes the labour they have to do even harder than it should be.

The slaves tried to cheer themselves up by singing. The verb ‘sing’ in the poem has a religious connotation which shows their belief in God. However, this belief is doubted by the suffering they have to endure day after day and also because their prayers go unsung, as Grace says. We see with the used adjective ‘unadorned’ that the slaves were treated badly, misused and badly dressed because appearance did not matter to the captors only work.

Grace Nichols uses repetition to convey the harshness of their lives as well. The words ‘old dry-headed women leaning on her hoe’ are repeated in the poem ‘Up my spine’ to show how bad their condition was and how mistreated they were. It also shows the amount of heat exhaustion they get and the lack of rest they have. Their heads are burnt by the sun and the skin is dry. Grace also says in that poem that they have to work even if they are injured and hurt. This shows how much they disliked slaves but had to use them for work to make money. The phrase ‘Way back time when she had a fall’ is used to show that there is no medical help for the workers so they work till they die.

Grace uses the senses to convey how awful the slaves’ lives were in this poem as well. Two examples of this are ‘I see the pit of her eye’ and ‘I hear her rattle bone laugh’. This also conveys the physical state that the slaves were in and how they looked. However their captors did nothing to help as it did not matter to them what they were like as long as they worked. The second example gives a feeling of hatred to the poem as she thinks that the slaves would want revenge on the overseers for what they did to them. After all no-one would want to work all day for nothing. The simile ‘twist up and shaky like a crippled insect’ which also conveys their lives.

In the poem ‘Water pot’ the workers are slaving away in a plantation centre. Grace says in it, ‘there’s a water pot growing from her head’. This is because the slave woman is carrying it on her head whenever they needed water which, in the heat, is often. It also shows how much work they had to do and for how long every day. Grace says in this poem as well that they are like cattle ‘always hurried’.

This conveys how badly they were treated and actually what the captors saw them as. The words ‘tried to walk like a woman’ is used to show how injured they were because of work and the fact they could not walk properly. Grace implies that the slaves had to pull themselves erect to keep some self-esteem, to keep going and not give up, and to show the overseers they will survive whatever they throw at them. However a vast number of slaves died during the 18th century alone.

‘Ala’ is a poem about a woman killing her own child and then being punished for it. In the poem, the slave has given birth to a child which she does not wish to keep because of who the father is. In this instance the father is one of the overseers/captors who raped her. This poem also symbolizes the horror the slave women had to go through and the fact that the title is a religious word meaning ‘god’ their cry for help to their God.

The woman who is being tortured is lying on a board with her arms and legs spread-eagled and staked to the ground. This is an implication of Jesus as he was crucified on a cross. The overseers see this woman as a ‘rebel’ and are making an example to the others by killing her publicly. She is the scapegoat. Grace uses repetition here to show to us what was in line for the other women if they did the same. She also says the slave has sent the new-born soul winging its way back to Africa. This implies that the baby is an angel as it has not been forced to work or put through any physical labour. Grace says the soul has gone to Africa because it is where most of the slaves originated from and it is then free.

This woman is being eaten alive by red ants as a form of capital punishment for her actions. The personification in the line ‘and the sun blind her with his fury’ adds to the cruelty. The sun is a male figure and so takes the side of the men. The other slaves then pray to God for the deceased woman to be accepted in the pocket of his womb. This is a link up with the baby who was also killed. They are asking for the both of them to be free.

Another poem Grace uses to convey the lives of the slave women is ‘In My Name’. This poem goes on about the horror the slave women had to go through. In this instance the baby is not killed therefore it is the opposite of ‘Ala’. The slave is in labour, giving birth to her ‘curled bean’ as Grace describes it. The woman’s belly is an arc of black moon.

This shows how unwanted the babies are and that the fathers are the overseers. The colour ‘black’ is evil and we get the impression of what birth is like the way she squats over the dry plantain leaves and commands the earth to receive you. The baby is being dropped here onto the ground because there are no medical facilities available. Grace says the baby is ‘my tainted, perfect child’. This is an oxymoron because she is saying two virtual opposites together.

The hatred towards the overseers raping them is shown in the words, ‘my bastard fruit’ and ‘my strange mulatto’. The second example shows that the baby’s father’s parents are mixed race and the mother does not like this. It will always remind her of the slave drivers or her captors if she ever escapes from their grasp. Where as the first shows how appreciative the overseers are of the baby but not the mother. She wishes it wasn’t born so it did not have to become a slave. Grace uses the words ‘my sea grape’ to show how far they have had to travel before arriving at their work place or deathbeds in many instances. At the end she says ‘now my sweet one it is for you to swim’ showing that the baby should make its own decisions on its life and to begin its journey.

Overall Grace Nichols poems show her hatred towards what happened to her ancestor’s long time ago and what is still happening today in some places. She believes ruling on it should be stricter and so there will be no slaves left.

How does Grace Nichols convey the life of the slave women in her poetry?. (2017, Sep 24). Retrieved from https://studymoose.com/how-does-grace-nichols-convey-the-life-of-the-slave-women-in-her-poetry-essay 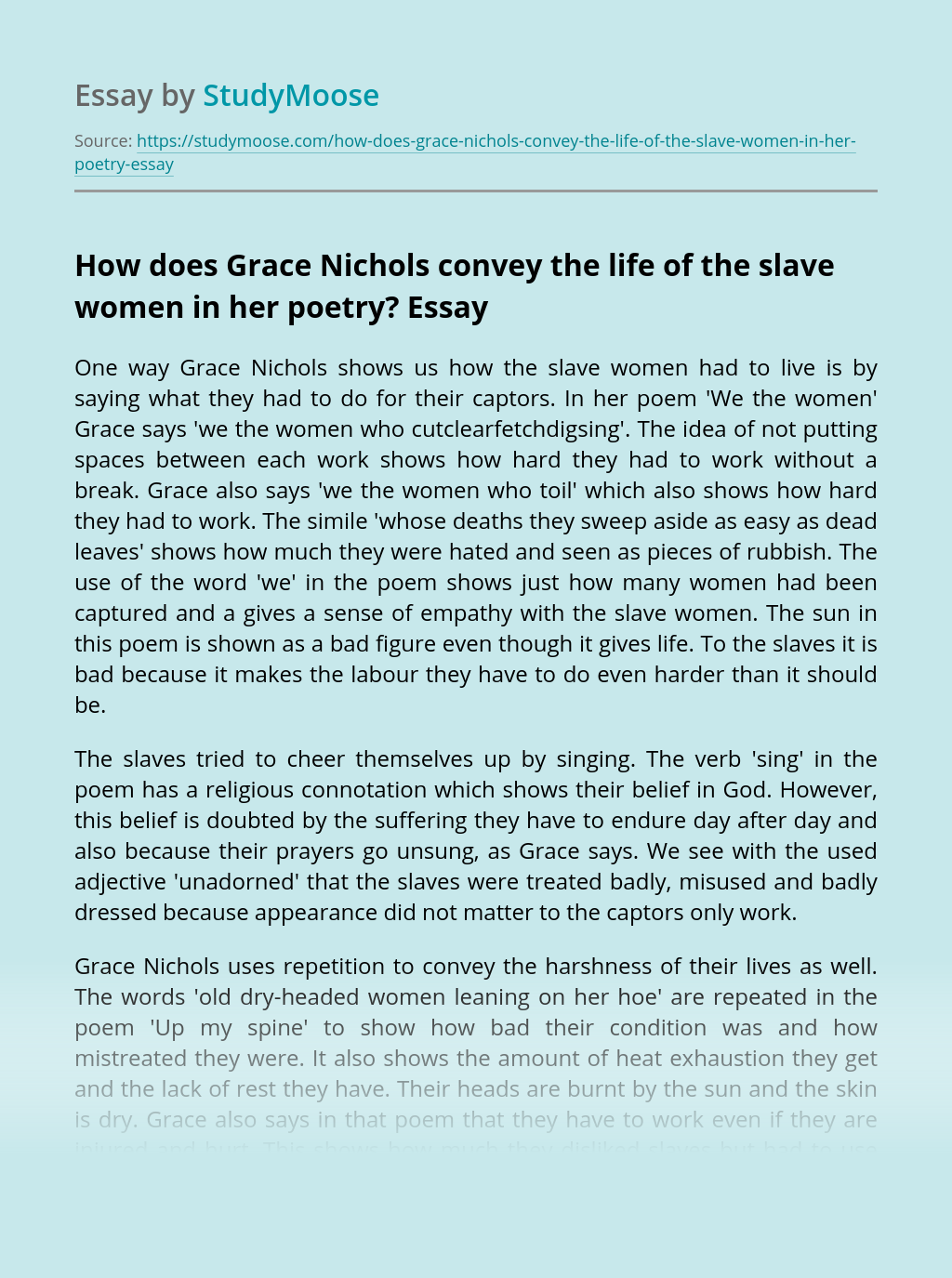 Follow the link to the Being Critical study resource here and

Ayn Rand’s revolutionary works led to the creation of a philosophical trend in America that gained growing international recognition. She was a founder of objectivism. Ayn Rand institute of objectivity can be informally characterized as the “world outlook of Life on Earth.” Its goal is to help in the formation of a generation of “new... VIEW ESSAY

In The Color Purple, Alice Walker writes of a predominantly sexist setting through the frequent beating of women, the stereotypes cast upon people, and the thoughts and feelings of the Olinka peoples. The author writes about the common and frequent beating of Celie by her father as discipline and of Mr. _____ to present a... VIEW ESSAY

Wilfred Owen and Rupert Brooke both share the similar themes within their poems, which are war and death. Although there is unconformity within their views due to their backgrounds and experiences. Brooke was very idealistic, which makes sense when he never actually got to fight in the war as he died shortly before where as... VIEW ESSAY