By a close analysis of language, show how the poets convey their cultural heritage and experiences through their poems. This essay will compare the cultural backgrounds and the style of language these three black poets use to describe their experiences. They are: Maya Angelou-“Still I rise”, Benjamin Zephaniah- “Miss World” and Grace Nichols-“Sugar Cane” through their poems. These three poems were written by black poets. They all have a theme of standing up for yourself, fighting for your rights and being strong and overcoming pain and suffering.

“Sugar Cane” is a poem about the life of a sugar cane that is grown and harvested. The poet personifies the sugar cane so the reader can associate more with the sugar cane, and there is a compelling desire for the reader to want to read the poem. “Miss World” is about a girl who is beautiful inside and does not want to be judged like an object in a show.

The poem is written like a rap and so is inviting to younger people.

This poem teaches that appearances are not important. “Still I Rise” is about a woman talking about all the hardships her ancestors had to endure and how she will prevail whatever is thrown at her. This poem is about standing tall and strong and not letting anyone put you down. In “Sugar Cane”, the poet uses very descriptive language that helps the reader visualise the sugar cane.

For example, “indifferent hard and sheathed in blades”. These blades are the sharp leaves of the sugar cane. This image is of a strong object, capable of defending itself. The blades are a symbol of the black slaves, able to fight back against people, wanting to destroy them. The poet also uses language in a West Indian dialect, “he isn’t what he seem” and “he shiver like ague when it rain”. The poet uses personification to help the reader visualise the sugar cane as a thing that matters, like a person.

Later on in the poem, the poet uses, “he comes to learn the truth about himself, the crimes committed in his name”. This refers to the fact that the slaves were used to farm the sugar cane for “the white man” and died from over work, exhaustion and starvation. In “Miss World” the poet also uses words that rhyme if the reader is reading in a West Indian accent, “best for self-defence” “cause no grievance”. Ordinarily these would not rhyme, so the reader would know at once by reading this or “de” (the) or “day”(they) that this poem is written in a dialect. In “Still I Rise” the poet always speaks in correct English and shows that she is well educated and is articulate. She uses phrases like “Leaving behind nights of terror and fear, into a daybreak that’s wondrously clear”. Sugar Cane is grown in many countries where black people live, and so most of them work to harvest the sugar cane. Sugar Cane grows through life and becomes old, “His colour is the aura of jaundice when he ripe”.

This could mean that the black slaves are unhealthy as a product of mistreatment. After sugar cane is possibly ageing, he then dies when “the hurricane strike smashing him to pieces” whether it is the hurricane killing him, or the farmers harvesting with machetes, “either way he can’t survive”. In some countries, sugar cane is the only source of income. The Poet uses the sugar cane as a metaphor for black people trying to be strong and fight back against racism and to show that they are tough on the outside but sweet on the inside like the sugar cane. This is similar to “Miss World” where the theme of the poem is not to judge people by their looks, ” You cannot judge my sister’s heart by looking…just by looking…just by looking at her breast”. The sister is described as being “beautiful” because she has a personality and is not superficial like the people who judge others, “just by looking”. Even though she is beautiful, she would rather fight for her rights then be treated like a slave or an object.

In “Sugar Cane” when black people were slaves, they’re lives were full of suffering and misery; the poet shows this as a metaphor for the sugar cane growing through the earth, “Slowly painfully sugar cane pushes his knotted joints upwards from the earth slowly painfully he comes to learn the truth about himself, the crimes committed in his name “. Similarly, in “Miss World” the poet conveys the sister’s hard life by saying that she is beautiful but “Her legs are firm and sharp best for self-defence”, showing that she has to defend herself. In “Still I Rise”, the poet describes a painful life, “out of the huts of history’s shame, I rise, up from a past that’s rooted in pain, I rise” this refers to the extreme pain and suffering this race went through. The poet talks about how she will overcome everything that is thrown at her and she will prevail.

“You may shoot me with your words, you may cut me with your eyes, you may kill me with your hatefulness, but still like air, I’ll rise” The poet mentions power over the sugar cane, suggesting the slavery of the black race, “it is us who weed him in the earth in the first place” “we feel the need to strangle the life out of him”. These lines show that the farmers have power over whether sugar cane lives or dies. Similarly, the farmers have power over whether their slaves live or die. In “Miss World” the poet mentions slavery and that his sister does not want to be viewed like a slave at a slave market and give the judges power over her life, “day judge your lifetime by a quick interview”. In “Still I Rise”, the poet suggests that she is powerful, “welling and swelling I bear in the tide” There are also sexual references such as, in “Sugar Cane”, “smoothing stroking caressing all his length shamelessly”. In “Miss World”, the poet writes that “her legs are firm and sharp” “she won’t walk the platform to upsex people’s lust”. In “Still I Rise”, the poet adds “I dance like I’ve got diamonds at the meeting of my thighs”.

These sexually descriptive comments imply the stereotype of the black race as being very sexually active. These stereotypes include black men being virile and black people having a natural sense of rhythm. “Sugar Cane” is written in blank verse but has a very strong rhythm, “Slowly painfully sugar cane pushes his knotted joints upwards from the earth slowly painfully he comes to learn the truth about himself, the crimes committed in his name “. The stanzas are in columns to look like a field of sugar cane. There is some repetition near the end with “slowly painfully”. This is probably used to emphasize the suffering of the black people. In “Miss World” the poem has a regular rhyme scheme. In other places the poem does not rhyme at all so this poem has an inconsistent rhyme scheme.

This is here to make the reader remember that it is what is inside that counts overall, not the outside. In “Still I Rise” each stanza is four lines long with a rhyme scheme where the second and fourth lines rhyme. This is consistent until the last two stanzas, where there is a line then “I Rise” then another line that rhymes with it, then two lines that rhyme. In the last stanza, it repeats “I Rise” at the end. This is here so it is a beacon of hope. Conclusion All these poems show the fact that black people suffered at the hands of other human beings and still do, just because the colour of their skin. These poems also show the fact that you do not have to let them take control of you or have power over you. You just have to remember… 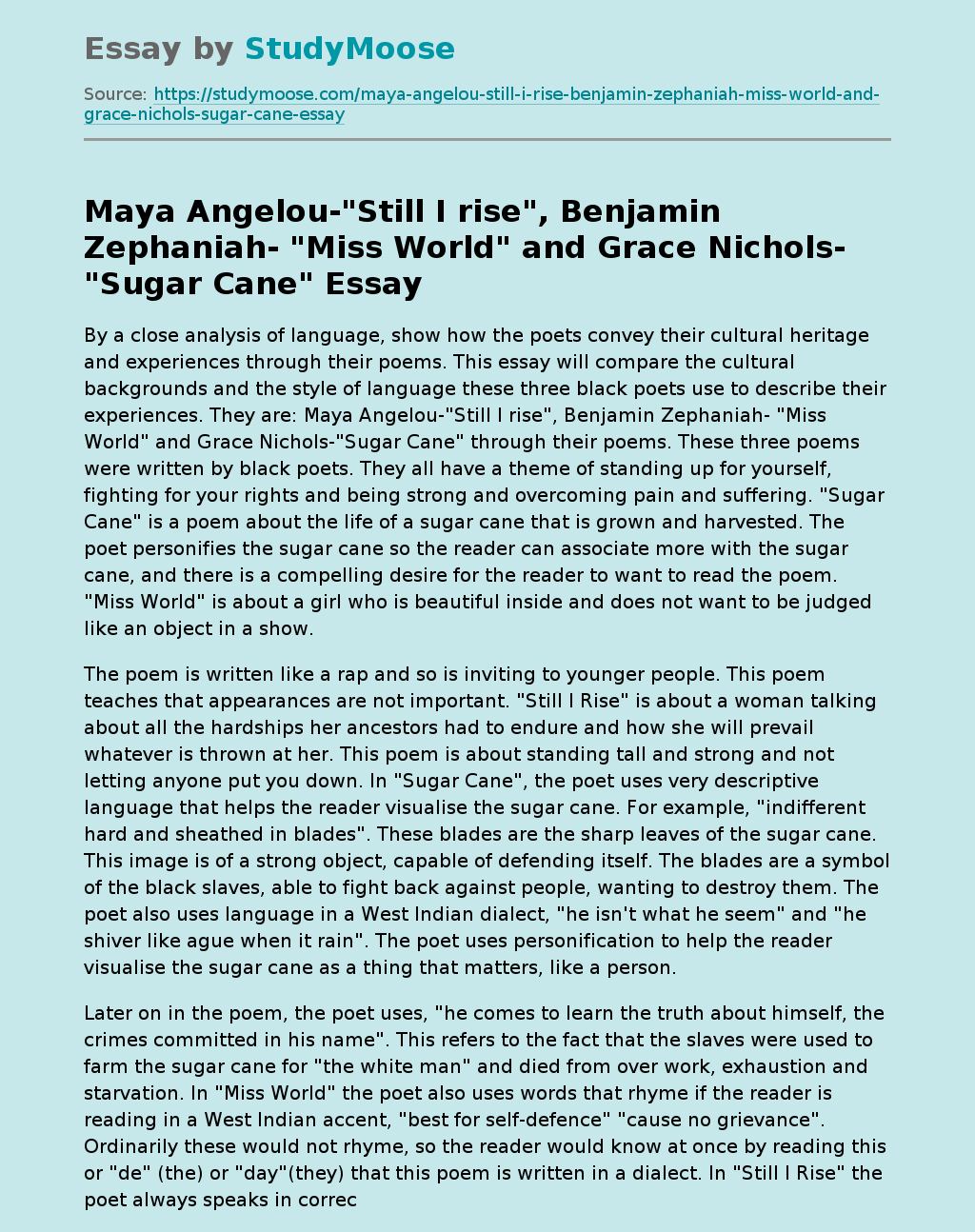