During the mid nineteen hundreds, racial segregation was prevalent in the United States, especially in the South. In the essay, “Graduation” Maya Angelou tells about her experience of graduating from the eighth grade in Stamps, Arkansas. In today’s society, a graduating ceremony is exciting for all, however, it is not uncommon. Often, people take these type of experiences for granted. This was not the case for Angelou. To her, having a graduating ceremony in her hometown was considered a privilege.

The writer structures the essay to evoke feelings from her readers and to get her point across.

Angelou uses literary elements to convey the overall point of the essay, starting with the title. “Graduation” references the commencement ceremony that takes place during the essay. It implies a pronouncement of the writer moving on and growing up. Structure helps convey the main reason the writer wrote this essay. The essay is structured in a way that the reader can feel empathy for the writer and understand what she and her community were dealing with during the nineteen forties.

Also, Angelou structures her essay to show how the experience, both the good and the bad, helped her to understand herself.

Tone plays an important role in conveying the overall point of Angelou’s essay. There are two major shifts that occur throughout the essay. The essay started off with an excited and happy tone about it. When Angelou writes, “The children in Stamps trembled visibly with anticipation.

Some adults were excited too, but to be certain the whole young population had come down with graduation epidemic” (15) it exemplifies the happy tone of the essay. Angelou was thrilled to finally be graduating and moving on to all the possibilities life would bring her.

However, in the middle of the essay the tone completely shifts in the opposite direction. Once the two white politicians walk on stage, the entire atmosphere of the graduation changes. Angelou expresses that her mood has changed when she says, “The man’s dead words fell like brinks around the auditorium and too many fell in my belly” (21). The racist nature of his remarks were not clear to him but still managed to make Angelou feel little, as if she could never amount to anything.

The writer includes this in her essay to reflect her pain and to show how one man had such a negative effect on everyone attending the ceremony. Fortunately, toward the end of the essay, the tone shifts back to being happy, joyful and somewhat hopeful. When Henry Reed lead the students in the singing of the Negro National Anthem, it brought back a sense of unity to the community. For the first time Angelou truly heard the lyrics and they finally gave meaning to her; she felt optimistic of what could come in her future. Not only does Angelou use literary elements in the essay, she also includes important details to reference to the specific time period.

A big part of the message Angelou is trying to convey is the racial segregation that is taking place. In the beginning of the essay, the writer compares the white and black schools to each other. She goes on to define the black school by what it lacks, “neither lawn, nor hedges, nor tennis courts, nor climbing ivy” (16). This reveals a clear illustration of what the white schools were given and how unimportant and unattended to the black schools were. Bigger than that, it defines society’s priorities in the nineteen forties. Another prime example of the lack of importance on the black communities was the name of the school, Layfette County Training School.

Black schools were called “training schools” because it was believed blacks didn’t need a real education. Black schools did not focused on further education, mainly because they weren’t given equal opportunities to do so. When Donleavy is referring to the graduates as future athletes and nothing else, it’s an insult to them because he’s implying that they can never amount to anything greater than that. Angelou includes these details in the essay to show the type of attitude white people had toward the black community.

The overall reason for Angelou to write a piece that holds as much meaning as “Graduation” was to share her experiences with the world. She wanted to make readers aware of the reality of racism. She allows the reader to understand, and for some maybe even relate. A deeper message Angelou wanted to convey with the reader is that no one person, no matter the color of their skin, should be able to put a person down. A day that was supposed to be one of the happiest in her life was made ugly by the racist remarks of a white man. Seeing Angelou overcome that with the help of her classmate Henry was a powerful thing.

Using specific structure, tone shifts and important references to the time period the writer was able to write an essay that was both thought-provoking and emotional. Angelou not only wrote for the entertainment of her readers, she wanted to teach readers the reality of racism. But beyond that, she showed them how one man’s words or actions were not going to keep her down. Angelou wrote about something that wasn’t talked about often, black graduations, and with the writing techniques she used turned it into a famous book. 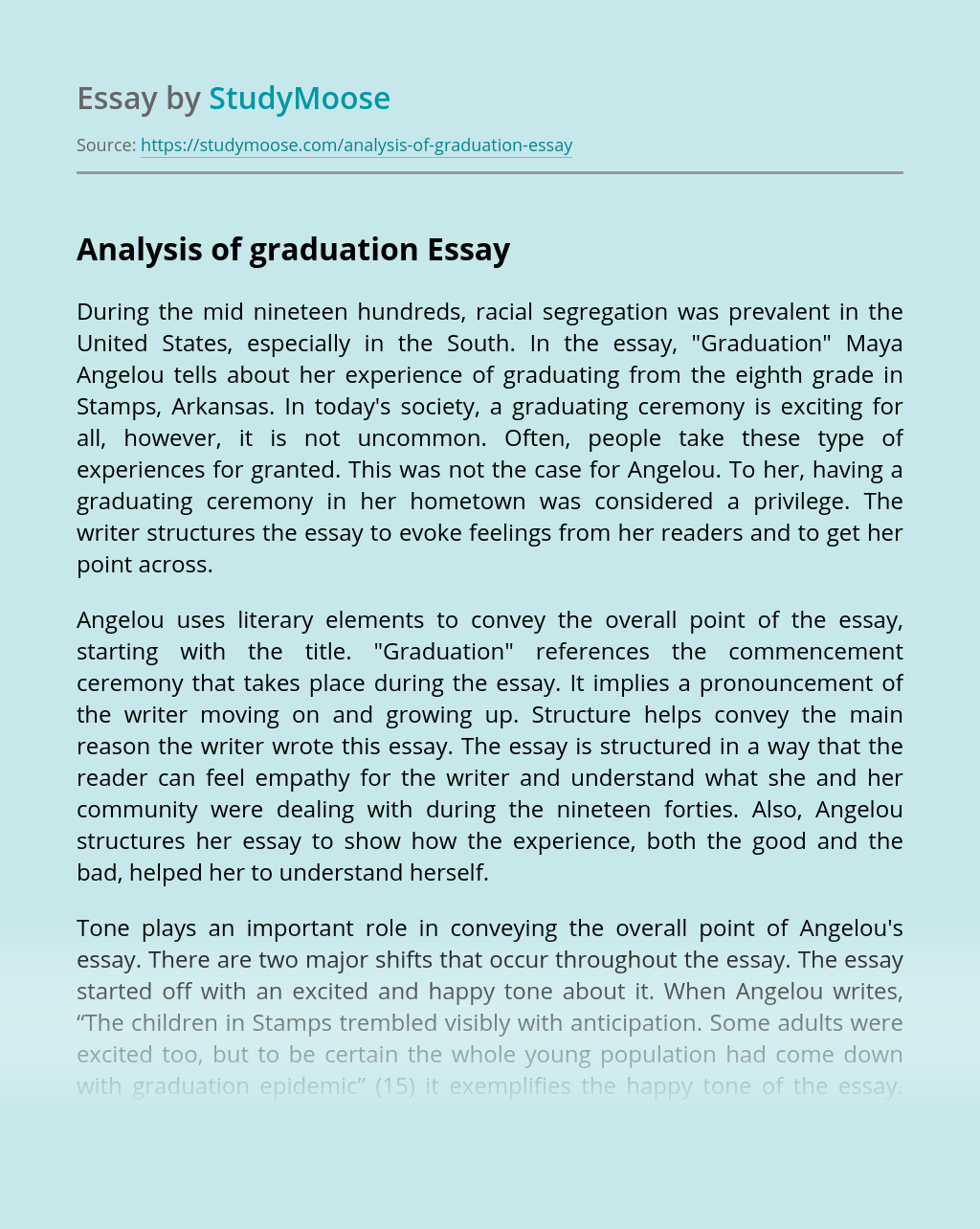 Rate this post Speech 1 A good speech for an elementary graduation would depend on who is going to be doing the speaking. For a teacher, you’ll want to make sure you thank the students for all of their hard work and wish them the best in the next grade they move up to. For...

Rate this post Ladies and gentlemen, honorable guest, family, faculty/staff and fellow graduates, Good Afternoon to you all. I feel privilege, honored and humble to be standing here today, representing the great Glorious Vision International Bible Institute of Class 2013. Our hearts are filled with gratitude that you could all be here regardless of your...

Rate this post “The heights by great man reach and kept were not attained by sudden flight, but they while their companions slept were toiling upwards through the night. ”  (Henry Wadsworth Longfellow ) Members of the school board, principal and staff, distinguished guests in the audience and on the platform, parents, guardians, graduate, good afternoon....

Rate this post It’s a rare opportunity to be given this privilege to talk to young minds like you–the youth whose minds and thinking are ideal, pure and filled with enthusiasm. Our theme is “The Graduate: A Partner Towards Transformational Society, An Answer to Societal Change”. We cannot effect social change if we ignore the...

Rate this post As a business entrepreneur my investments have focused into the hotel industry. One of my biggest goals is to build and open my own hotel to start my own business. I have done some research and I find myself well suited to be able to operate a franchised brand hotel. I have...

Rate this post Using what you have read in this introduction to TESOL and your own knowledge, what do you consider to be the blocks which may prevent language learning? When speaking about difficulties in learning and teaching foreign language different authors use different terminology. Some of them speak about mistakes, misbehavior (Cummings, C.: 2000),...

Rate this post It is true that the ways the parents raise their children will decide how well the children grow, especially the mothers who impact their children the most. There is no right or wrong in how a mother takes care of her children. All of them want the best for their children. The...