The two poems that I have chosen to compare and contrast are ‘Composed upon Westminster bridge’ by William Wordsworth and ‘Island man’ by Grace Nichols. Westminster Bridge is set in London and William Wordsworth is trying to tell us how beautiful London is. However the poem ‘Island man’ is set in a person’s dream about the Caribbean and in this poem Grace Nichols is writing about how bad London is.

Don't use plagiarized sources. Get your custom essay on
“ Compare and contrast ‘Composed upon Westminster bridge’ by William Wordsworth and ‘Island man’ by Grace Nichols ”
Get custom paper
NEW! smart matching with writer

Grace Nichols was born in 1950 in Guyana in the West Indies. She came to Britain in 1977 with her partner, the poet John Agard. They live in Sussex.

Many of her poems were based on the Caribbean theme. Grace Nichols was a 20th century where as William Wordsworth was a 19th century poet.

“Composed upon Westminster Bridge” was a poem that described London as a huge powerful place and that has been written from upon Westminster Bridge. Wordsworth uses words like ‘Majesty’ and phrases like ‘And all that mighty heart is lying still,’ to emphasize the power and greatness of London. Grace Nichols tries to tell us how bad London is by starting her poem off in a dream and then waking up in London all depressed.

She uses words and phrases to describe London like, ‘Island Man heaves himself.’ She is trying to tell us that island man has no energy and that he has to force himself to rise up out of bed. She also uses the phrase ‘dull North Circular roar’ and this says that there is a dull roar of cars going past that island man can hear.

Each poet uses various poetic devices and each uses different types of language. Grace Nichols uses many colours to describe the Caribbean and then again to describe London. She writes ‘morning and island man wakes up to the sound of blue surf’ and this describes the sea in the Caribbean very well. Later in the poem she writes, ‘from the east of his small “emerald” island he always comes back groggily, groggily.’ Here she uses the colour emerald to describe the island. Then to describe the buildings, footpaths and the roads of London she uses the phrase ‘comes back to sands of a grey metallic soar.’ This description of the footpaths gives a very good contrast to the Caribbean scene

In Wordsworth poem to describe the flow of the river he writes ‘the river glideth at his own sweets will’ and it is as if the river is flowing at its own pace. To describe the tranquility of London he uses the phrase ‘in his first splendour, valley rock or hill, ne’er saw I never felt a calm so deep.’ Grace Nichols uses some litery devices. Firstly in the 5th paragraph, she uses an oxymoron by saying ‘comes back to sands of a grey metallic soar to surge of wheels to dull north circular roar.’ She then uses rhyme in the 5th paragraph by using the two words ‘soar’ and ‘roar’ in as many lines. I think it is weird that the way she uses the word ‘sands’ to describe London and I think this word would be better used to portray the Caribbean.

Wordsworth uses many poetic devices. He uses a simile when he writes ‘this city now doth like a garment wear’ and it is as if the city is wearing something gorgeous. He subsequently uses two metaphors, ‘and all that mighty heart is lying still’ and ‘never did the sun more beautiful steep.’ to describe how significant London is and how it is the centre of an empire. Also this is describing how fine-looking London is and is the most outstanding scene that Wordsworth has ever seen. Personification is used in this poem to illustrate how the river flows and to describe how quiet and still London is.

If you look at line six when it says, ‘ships, towers, domes, theatres and temples lie,’ this is an example of alliteration used by Wordsworth. In the ways of rhyme this poem doesn’t disappoint. He uses many examples of rhyme, for instance ‘fair, wear, bare’, ‘lie, sky’, ‘steep, deep, asleep’ and ‘hill, will, still’ and it seems that all these words were at he end each line. The rhythm in is poem is regular. It has enjamblement, which reinforces the happiness of which this poem runs on.

I feel that in his poem Wordsworth has achieved what he is trying to say about London. He makes us feel that London is a beautiful place and that there isn’t a place like it on earth. He furthermore makes us feel that London is huge and important place by using vocabulary like ‘Majesty’ and ‘Mighty heart’. I like the way he uses all his poetic devices as they work truly fine to express London as a nice place.

I believe that Grace Nichols should feel disappointed; as for me her poem has no effect. I feel that her poem sounds a slight bit weird as she uses the word “groggily” and then she repeats it, which in it’s own right is unique but doesn’t sound right. Besides these disadvantages it has one, but not many advantages. I liked the way she uses colours to describe the Caribbean and London in this poem. overall this poem has no effect.

I prefer ‘Composed upon Westminster bridge’ by William Wordsworth as It has more detail and uses unique words to depict London where as ‘Island man by Grace Nichols is unusual and doesn’t have t he same finesse as Wordsworth’s poem. Wordsworth’s poem sounds and looks more like a common poem while Grace Nichol’s does not.

Compare and contrast 'Composed upon Westminster bridge' by William Wordsworth and 'Island man' by Grace Nichols. (2020, Jun 01). Retrieved from https://studymoose.com/compare-contrast-composed-upon-westminster-bridge-william-wordsworth-island-man-grace-nichols-new-essay 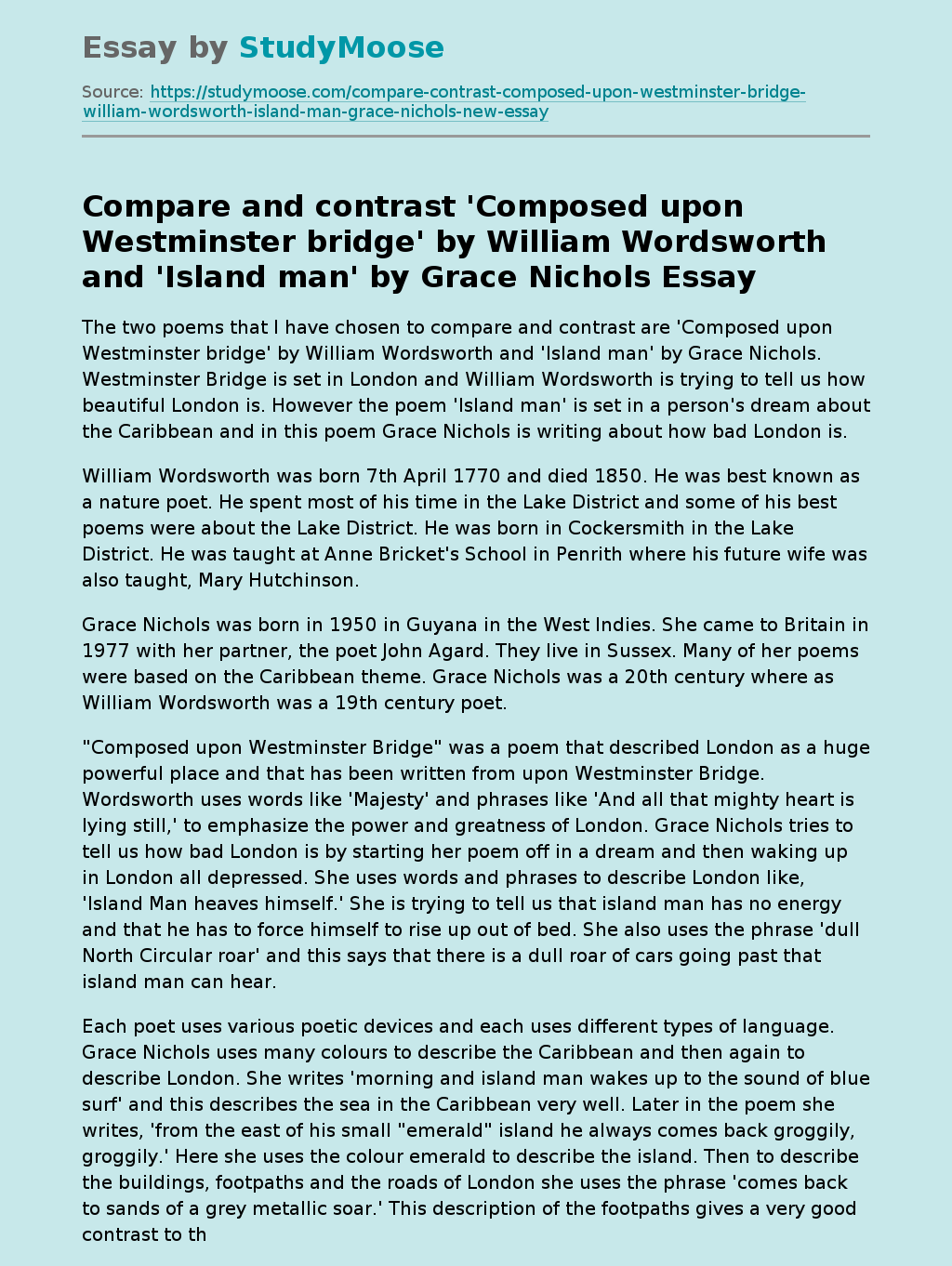