This essay intends to explore the theme of attraction in two similar poems by pre 20th century poets Lord Byron and William Wordsworth. This essay will include the background of each of the poets and how the poets ideas are outlined using language, structure and form. The essay will hopefully show using various quotes how the subject of mysterious beauty is put forth and the way in which the personality of characters differ from each poem. The essay will also come to some conclusion about the similarities and differences between both poems.

Don't use plagiarized sources. Get your custom essay on
“ Compare and contrast how Lord Byron’s She Walks in Beauty and William Wordsworth’s She was a Phantom of Delight ”
Get custom paper
NEW! smart matching with writer

This paragraph will give information on the backgrounds of each of the poets and how this may affect the poems. This paragraph will also compare the two poets so that a conclusion can be made. William Wordsworth the younger of the two romantic poets was born in 1770 and studied at Cambridge university. After university he lived most of his life with his sister in the Lake District where he met the poet Samuel Taylor Coleridge with whom he produced the famous Lyrical Ballads.

He was a very strict and elaborate which is shown in She Was a Phantom of Delight when he makes sure every line has 8 syllables which is discussed in the next paragraph.

In comparison the younger poet Lord Byron by 18 years. Byron was a handsome man but had a deformed foot. He inherited his title and his real name George Gordon is not as wildly known. He was influenced by previous romantic poets such as Wordsworth and Byron’s work also shows a similar strictness like William.

Byron would of probably chosen to do romantic poems as they were the fashion of the time just like Wordsworth. In conclusion both poets were part of the same movement of poets and lived in the same sort of time.

Both their works were very strict and the reason why this essay is writing about romantic poets is because their works have influenced many others and the effort and perfect quality of all their poems is a great incentive for all poets, filmmakers and musicians. This paragraph offers facts about the layout of the poems and how this could affect the meaning of each poem. This paragraph would again like to compare both pieces as the results could be especially interesting. The form of Byron’s poem is fairly regular and each of the 3 stanzas has 6 lines.

There is also a very regular metre as there is 8 syllables per line with the some exceptions for example line 6 was probably nearly impossible to put right or “denies” is meant to be pronounced with 1 syllable like previous words “eyes” and “skies” which are also only 1 syllable long. This is proof of his obsession with the English language and how strict he was. To back this up Byron has spelt the word “climes” incorrectly for its meaning because possibly this would fit in with the poem better. There is an extremely regular rhyming scheme of ABABAB and this is significant because it reflects his love and perfection of the English tongue.

In Wordsworth’s poem his poem also has 3 stanzas only each one has 10 lines. Just like Byron William has a regular metre with 8 syllables a line. The rhyming scheme is different to the work of Byron maybe because William was older and the style changed over the years. Wordsworth scheme was AABBCCDDEE for each stanza. Wordsworth’s poem shows little of how hard it must have been to construct this poem as it is nearly perfect. One example of a glitch may be the half rhyme of “good” and “food” as these do not really rhyme. This paragraph has shown that both poets have used a very regular structure to their poems.

This portrays the determination used to create these poems. The meaning of the poem could be effected by the rhythm of both lyrics and beauty may be shown better through the strict romantic style. Language is a key factor to all poems and this paragraph will attempt to explain the differences between both poets work, especially in their use of alliteration. Also the theme of both poems, mysterious beauty may be conveyed through the complex language of poets. Byron uses alliteration to describe the woman, “serenely sweet. (line 11) The use of alliteration has enhanced the meaning of the word “sweet,” and the reader is more likely to remember alliteration. This language feature has allowed Byron to describe the woman in a more interesting way and perhaps the repetition of the “s” sound was put their because it gives a soft understanding to both words. Wordsworth uses alliteration also to describe the woman’s character, “Spirit still. ” (line 29) This has connotations of a person that is not moving on in their life or maybe it could describe a ghost that is stationary.

The poet has also started “Spirit,” with a capital letter perhaps to outline its role in the poem or to suggest a ghost which backs up this thought. The use of alliteration has brought up ideas of mysteriousness. In conclusion this paragraph has shown that the use of alliteration has been used effectively to produce ideas of the woman’s character being mysterious. Alliteration has added to the effect and has given each quote a deeper meaning. It is very interesting how both the poems start, so this paragraph will give key factors on each of the poets first lines. The similarities are intriguing and so a conclusion will have to be made.

Byron’s first line, “She walks in beauty, like the night,” also has the tittle of the poem in it and so makes it doubly important. Byron’s clever use of language features such as the simile, walks in beauty, like the night and personification as the night cannot walk already makes an onlooker interested. The theme of the poem is revealed slightly, “beauty,” and this can make a reader want to read on. The idea of mysterious beauty is again revealed slightly, “night,” as this has connotations of mystery and all things bad but is somewhat contradictory to beauty. The subject is said to be a woman as well.

In comparison Wordsworth’s first line, “She was a Phantom of delight,” is very similar to Byron’s as it outlines briefly the major themes, “Phantom,” which could also mean a ghost which is an example of mystery and “Delight,” has connotations of joy and beauty. Again William also gives the subject of the poem. It is very interesting how Wordsworth uses a metaphor and Byron uses a simile. This might be because of the differences in fashion between when both poems where written or it could be down to the way in which both poets have lived their lives and how this has influenced their poems.

This paragraph has shown that the first line in both poems has given a glimpse of the plot and has managed to grip the reader by using language features. The personality of the woman in each poem is intriguing and as both poems write about poems it is a topic which can be compared. Byron describes his view of his woman as “best of dark. “(line 3) Dark has a connotation of evil and mystery and if she is best in the dark perhaps she has horrible looks or he only sees her in the dark such as a prostitute.

The idea of prostitution is continued in line 8, “nameless” and the idea that she is better in the dark is furthered in line 7. Whereas Wordsworth describes the woman in his poem a “Creature not to bright. ” A creature is an unexpected thing to call a beautiful woman as creature implies a beast or a wild person. Perhaps she isn’t very intelligent as this is implied also. The idea of a Phantom or a ghost is mentioned throughout the poem. This ties in with the quote as she might be a ghost and she would be a creature not a person.

In conclusion the characters of each poem are slightly different as one is projected as perhaps a prostitute and the other a spirit or angel. This paragraph intends to explore the theme of mysterious beauty portrayed in both Romantic poems through physical imagery of hair. Wordsworth obviously mentions “dusky hair. ” (line 6) Dusky implies a soft brown colour and so overtly the woman has brown hair. Whereas Byron describes the woman’s hair as a “raven tress. ” (line 9) Ravens are stereotypically black and perhaps evil whilst tress indicates a ringlet of hair.

Therefore we can assume perhaps this woman has black hair and that she has an evil or mysterious side. Perhaps this paragraph has shown that the two poets ideas of beauty portrayed through hair differs and both poets play with physical images such as hair to illustrate their ideas. In conclusion this essay has shown that the two very similar romantic poets, Byron and Wordsworth have conveyed their ideas of mysterious beauty through poetry in many strict ways. The structure of their poems has shown how both poems are very regular and have a strict orderly rhyming scheme.

The use of certain language features has given the poems a more in depth understanding and this has been shown in both the first lines and parts of the poems referring to beauty. The first lines have also grasped the reader by not giving away the whole meaning of the poem. The characters of both ladies in the poems have shown that perhaps one could have been a prostitute and the other maybe a ghost. Finally physical imagery in the poems has shown that both poets differ on how they picture beauty and this is shown through their poetry.

Compare and contrast how Lord Byron's She Walks in Beauty and William Wordsworth's She was a Phantom of Delight. (2020, Jun 01). Retrieved from http://studymoose.com/compare-contrast-lord-byrons-walks-beauty-william-wordsworths-phantom-delight-new-essay 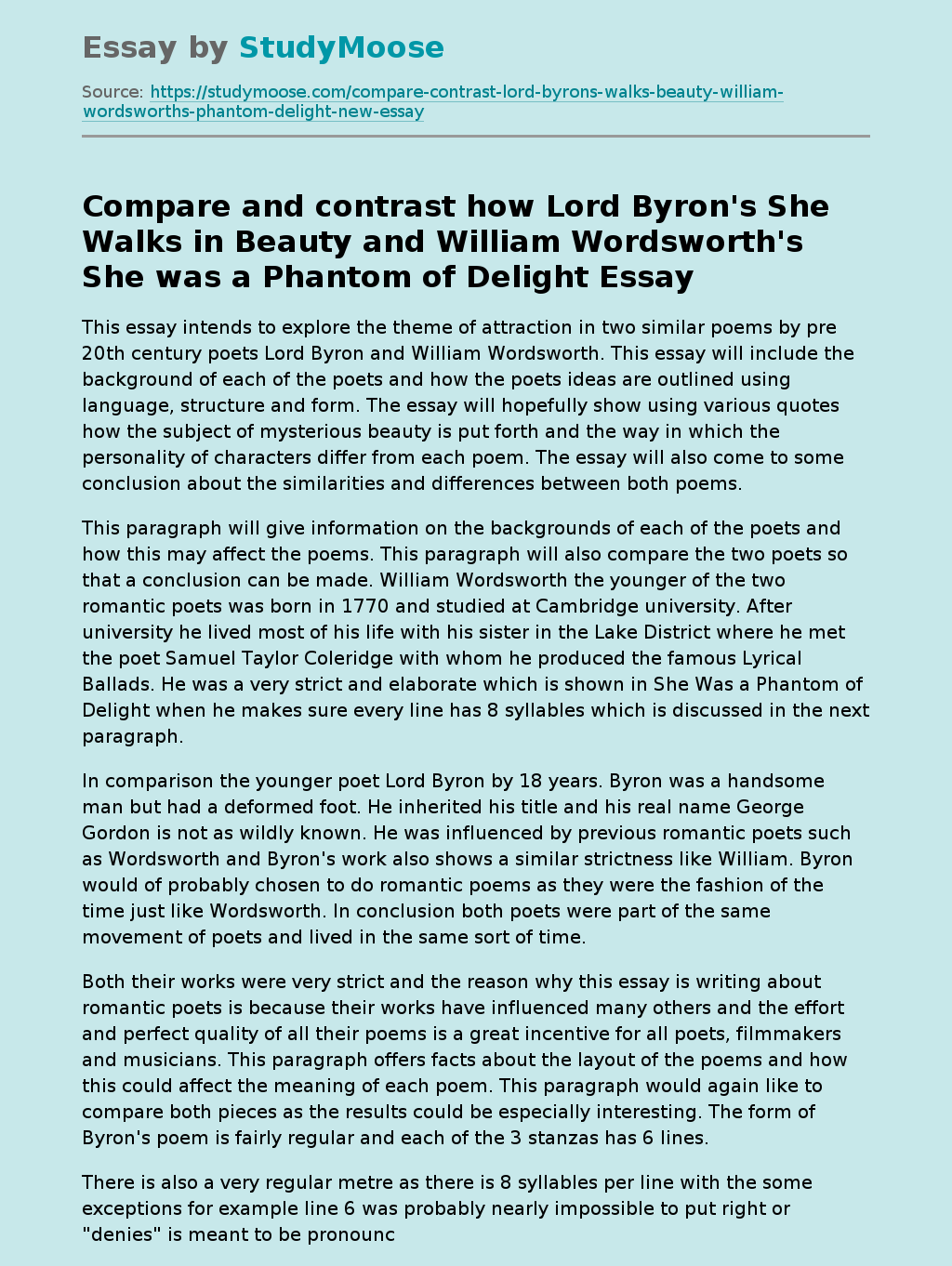