William Wordsworth had written a long and detailed description on his view of an ideal soldier and all the characteristics he would have. Although this poem is long, it is not that complicated and the point Wordsworth is making is quite obvious.

Herbert Read, however, has written a very short poem, yet it is incredibly complicated and could be interpreted in many different ways.

One way, and maybe the more obvious way, in which you could interpret it, is that the title is in fact sarcastic and you can’t actually have a ‘happy warrior’. I say this because the language used in the poem is the complete opposite of happy. In the poem, there are words and phrases such as “painful sobs”, “strain’d hands clench an ice cold rifle”, “aching jaws grip a hot parch’d tongue”, “Bloody saliva Dribbles down his shapeless jacket” and “I saw him stab, and stab again.

” How can the poem be describing a ‘happy warrior’ if there is so much pain and misery portrayed? To me, the poem is a description of what the war is really like, and the title is actually being sarcastic.

Another way in which you could read Herbert Read’s poem, is that the ‘happy warrior’, is the soldier that survives.

It doesn’t matter how much pain he must go through, as long as he survives, he is happy.

“I saw him stab

“This is the happy warrior”

The ‘happy warrior’ is perhaps happy, because although he has been through all the pain, he has not been killed and is still alive. He was the one watching someone being killed and not the one being killed, for that, he is happy.

Yet another way in which Read’s poem could be read, is that the ‘happy warrior’ is a warrior that enjoys seeing people-the enemy- being killed. Most of the adjectives are unpleasant, and could be reflecting his character. Yet when you read the poem again and search for other meanings, it must also be noted that as well as showing how awful it is, there are also adjectives that are maybe describing the excitement of living on the edge; “Wild heart beat” and “Wide eyes search”. This could perhaps be representing the excitement adrenaline that the ‘happy warrior’ is feeling.

The manners in which these two poems are written is are opposite. Herbert Read’s poem is very pessimistic, uses negative words and focuses on the bad points of war. Wordsworth’s poem is different and is optimistic; showing the good qualities a happy warrior would have, using positive words. Read uses words such as “painful” and “unconsciously” in his poem, whereas Wordsworth uses words such as “generous” and “honourable”.

Another difference between these two poems is the mood in which they are written and the way these moods are shown. Wordsworth’s poem is very calm, tranquil and peaceful. This is shown by being constant and flowing. T has an ongoing steady rhythm and continuously flows from one line to the next.

“Who is the happy warrior? Who is he

That every man in the arms should wish to be?”

Even from the first two lines, you can tell that this poem has a calm peaceful nature. The mood in which Herbert Read’s version of The Happy Warrior is written in is again completely different! It is bleak, dismal and miserable, and being short and snappy, using depressing, unpleasant words and being inconsistent and not flowing shows this.

These two poems both share the same title, but they are very different. They don’t even have the same ideas for what the ‘happy warrior’ is. This shows that a title/phrase etc can have many different meanings if you look at it in different ways. 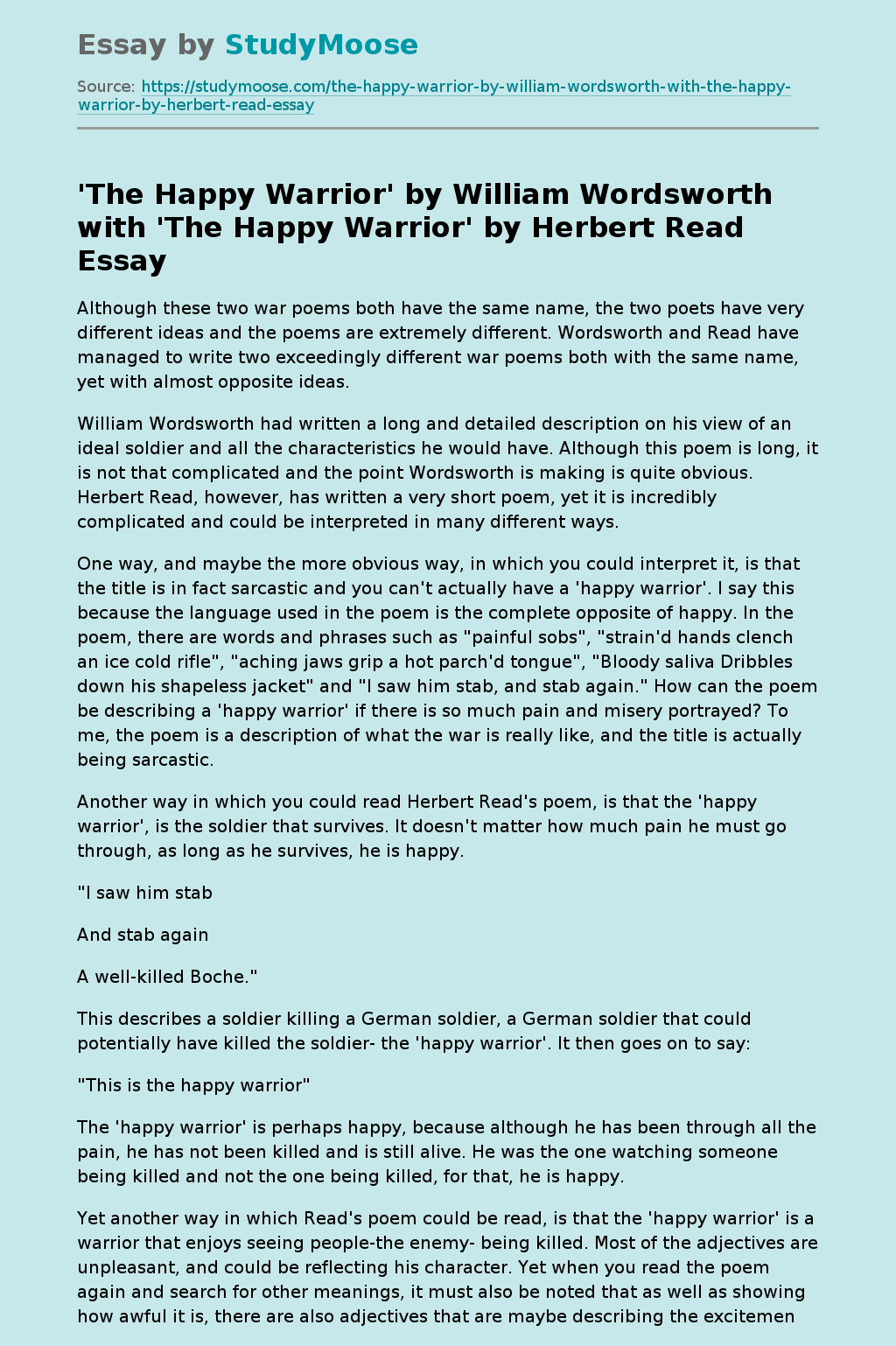