When the play begins, Macbeth is given the characteristics of being a great warrior, who leads his nation to victory with the simple motivation that we will stop at nothing to serve his country. Yet as the play goes on, the true colors of Macbeth come out as he is blinded by his ambition to obtain power to which he would take extreme measures, where only tragedy was sure to arise, revealing that Macbeth is a true monster at heart.

The only thing between Macbeth and the crown was his cousin Duncan, which he decided to kill Duncan if he is to become king, where only a monstrous person can achieve.

Don't use plagiarized sources.
Get Your Custom Essay on Macbeth- Monster or Man Just from $13,9/Page

Though he troubles himself whether he should murder, his determination to obtain power took over his morality and drove him to kill his cousin to claim the crown. “To prick the sides of my intent, but only Vaulting ambition, which o’erleaps itself And falls on the other…Now I’m decided, and I will exert every muscle in my body to commit this crime.

” (Act 1 Scene 7) Even with the crown, Macbeths evil doings do not stop, for once he is crowned king, he becomes paranoid of all those around him, imagining that they will betray him, and when he suspects that his best friend Banquo, questions of how he became king, he makes no hesitation to have him killed. “To be thus is nothing, But to be safely thus.

Our fears in Banquo Stick deep, and in his royalty of nature Reigns that which would be feared.” (Act 3 Scene 1) Macbeth stopped at nothing from becoming and staying king, taking out all of those in his way, even those who wear closest to him. Although Macbeth was deceived by both the witches and his wife to do their doing, Macbeth realized the extreme measures of the actions he had to do, but yet he follows through, discarding the future consequences. Even though Lady Macbeth bamboozled Macbeth to kill Duncan, by questioning his man hood, Macbeth had the choice to whether he should murder his cousin, or wait until he died naturally, but became too anxious to prove that he is a man and he truly wants to become king. “Wouldst thou have that Which thou esteem’st the ornament of life, And live a coward in thine own esteem…I dare do all that may become a man; Who dares do more is none…What beast was ’t, then, That made you break this enterprise to me? When you durst do it, then you were a man; And to be more than what you were, you would Be so much more the man…I am settled, and bend up Each corporal agent to this terrible feat.” (Act 1 Scene 7)

Macbeth seeked the witches, and chose to be driven by fear, imbedded by them, to believe that Macduff will defeat him, and allowed it to unravel his plan to kill those who will betray him immediately, exposing that we will do anything to protect his ruling. “Time, thou anticipat’st my dread exploits. The flighty purpose never is o’ertook Unless the deed go with it. From this moment The very firstlings of my heart shall be The firstlings of my hand. And even now, To crown my thoughts with acts, be it thought and done: The castle of Macduff I will surprise, Seize upon Fife, give to th’ edge o’ th’ sword His wife, his babes, and all unfortunate souls That trace him in his line. No boasting like a fool. This deed I’ll do before this purpose cool.” (Act 4 Scene 1) Macbeth always had a choice to do what was morally right, but rejected it to prove his manliness as well as to satisfy his ambition.

To lift suspicion from one self, one must hide their true dark desires, and must act as virtuous hero that can only do upright as if to wear mask that deceiving everyone what a true monster one is. Not only does Macbeth fool every one of his “sorrow”, when he overreacts at the news of Duncan’s death, but uses it to his advantage to brain wash everyone into justifying his actions done. “Had I but died an hour before this chance, I had lived a blessed time, for from this instant There’s nothing serious in mortality. All is but toys. Renown and grace is dead. The wine of life is drawn, and the mere lees Is left this vault to brag of. Who can be wise, amazed, emp’rate, and furious, Loyal and neutral, in a moment? No man. Th’ expedition of my violent love Outrun the pauser, reason.

Here lay Duncan, His silver skin laced with his golden blood, And his gashed stabs looked like a breach in nature For ruin’s wasteful entrance; there, the murderers, Steeped in the colors of their trade, their daggers Unmannerly breeched with gore. Who could refrain, That had a heart to love, and in that heart Courage to make’s love known?” (Act 2 Scene 3) Macbeth was always the ‘snake under the flower’, masking his true self, deceiving those around him into believing that he is innocent.

Towards the end of the play, the true selfless, ruthless and cunning aspects of Macbeth are reveal to unmask the true ambitious, power hungry, and heartless monster he truly is. 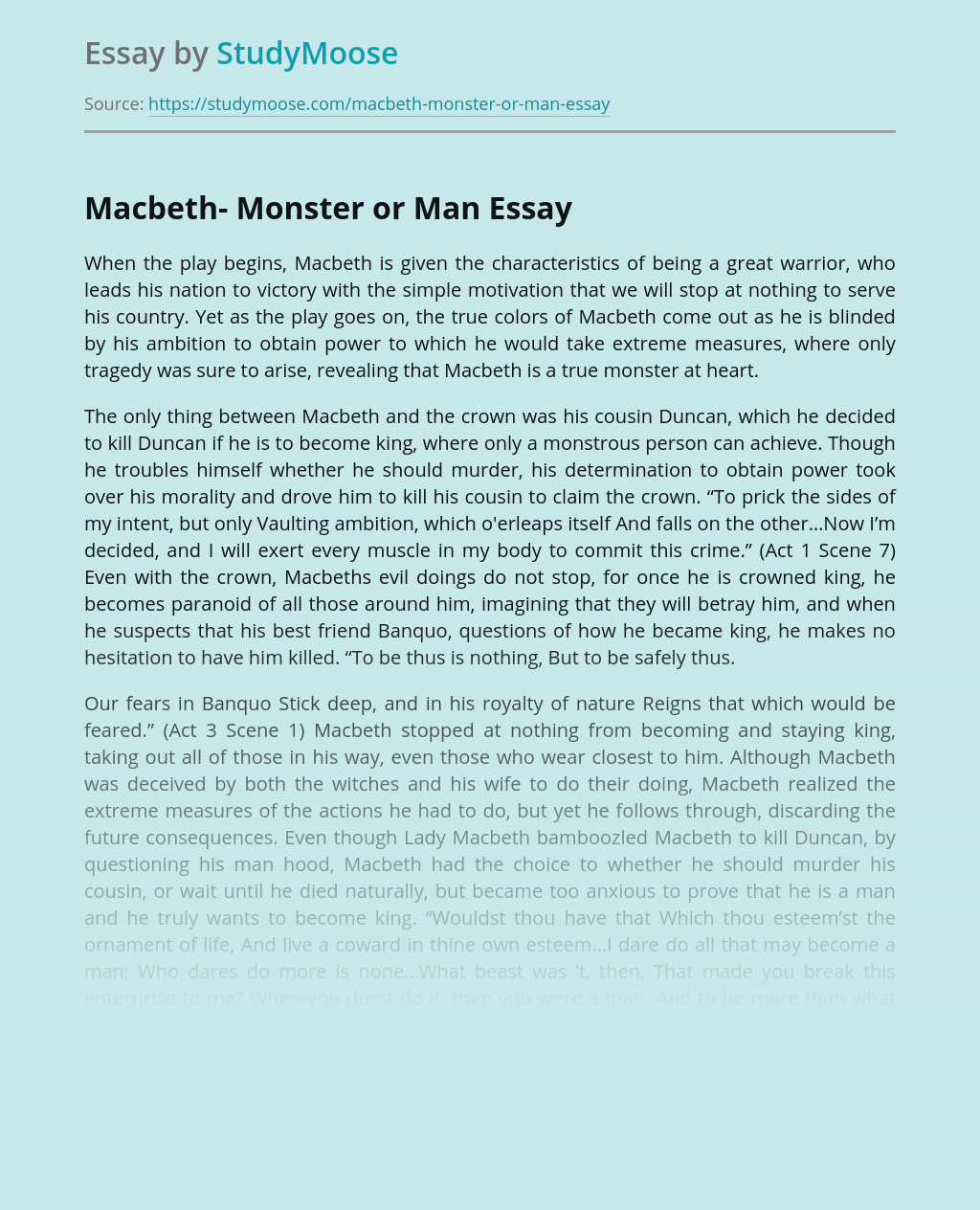 The Renaissance was a period of great change, characterized by a revision of many concepts and the birth of many ideas. One of the greatest scholars of this time was Desiderius Erasmus. He was born in Rotterdam, Holland. His birth name was Gerrit . He attended the school of the Brothers of the Common Life...

In the play, “A Midsummer Night’s Dream, by William Shakespeare, several examples of love’s association with a higher power are presented like Theseus arranging a marriage between himself and Hippolyta, Egeus choosing who Hermia should marry and the fairies who have the ability to control love in the Enchanted Forest. There are many instances in...

Get Essay
Lord of the Flies Essay on Pathetic Fallacy

“This is our island. It’s a good island. ” (Golding 35). Contradictory to this quote, nature is never to be claimed by man, nor is always good- it is man that is controlled by the dynamically changing nature. In Lord of the Flies, William Golding reveals the nature’s beauty and power by personifying the island...

Provincialism in to "Kill A Mockingird"

The 1930s was a time when the U.S. was undergoing major changes. As well as the economic depression which was being felt so sharply; it was the years where clashes between certain ethnic groups occured. The happenings of those days have been reflected upon literature as well. Most of the authors often take racism as...

Romeo and Juliet is a beautiful and romantic famous love story known through almost all over the world. Many producers have remade this dramatic story ad producers will get many ideas from this story to help them create their own. There was a movie made in 1996 and in 1968. These two movies are very...