"The Count of Monte Cristo" by Alexandre Dumas

The word revenge is defined in the dictionary as : ‘get satisfaction by deliberately causing injury in return for a person or oneself suffering’. Governments and countries often take revenge by fighting, like with after the Japanese bombed Pearl Harbor the U.S government gave an order to bomb Hiroshima and Nagasaki as revenge. Kings and dictators also take revenge by invading other countries, and even the ordinary people, like us, take revenge on smaller issues. But is it morally justified? The answer to this question is largely depends on whom you ask, and it may vary according to the concepts and values that he/her was raised on – it differs among different peoples, cultures and traditions.

Don't use plagiarized sources. Get your custom essay on
“ “The Count of Monte Cristo” by Alexandre Dumas ”
Get custom paper
NEW! smart matching with writer

In this essay I will try to answer this question from the point of the story The Count of Monte Cristo by Alexandre Dumas. In order to discuss the revenge issue of this book let us begin by a brief summery of the story.

Edmond Dantes, a young sailor, gets a reward to be a Captain of a ship, but unfortunately four men arranged that he will be imprisoned for a crime he did not commit.

The four men are Danglars, Villefort, Fernand Mondego, and Caderousse. Dantes has spent fourteen years in prison and then he escaped with a friend that taught him many things and gave him a map to a treasure. The friend (Abbe) died, and when Dantes finds the treasure he becomes rich and famous and is known as The Count Of Monte Cristo.

During all of this period he didn’t stop thinking about revenging his enemy. He just waited for the perfect time and now it came. His mission is to revenge the people who imprisoned him and help the people who helped him.

The Count Of Monte Cristo’s opinion about revenge and death is that people who made other people suffer for a long long time should not die quick, in other words you don’t just kill them, you torture them so that they will die slowly and painfully. Dantes wants them to be miserable and give them a hard time for a long period of time just like he suffered for a long time in jail. That is why he did not hire anyone to kill his enemies or kill them himself.

This is proven in the following quote that The Count Of Monte Cristo said: ‘If a man has tortured and killed your father, your mother, your sweetheart, one of those beings who leave an eternal emptiness and a perpetually bleeding wound when they are torn from your heart…do you think society has given you sufficient reparation because the man who made you undergo long years of mental and emotional suffering has undergone a few seconds of physical pain? For slow, profound, infinite, and eternal suffering. I’d try to avenge myself by inflicting similar suffering-an eye for an eye, and a tooth for a tooth’. This last sentence in the quote, is a sentence from the bible and I think that by telling us this, the author wants to show us that even in old time, in a book that suppose to teach us about life, revenge was taken and was not immoral. This sentence also serves as well as a justification for him to carry out his revenge plans.

Monte Cristo was very smart. He looked for the weak points of each person of whom he wanted to take revenge of, and there he hit. He learned a lot about his enemies after he escaped from prison. For example we know that Danglars loves money, so Monte Cristo arranged for him to have no money, he destroyed him financially. Another example is Fernand Mondego’s case. After Fernand reaches a high position and became Count de Morcerf, Monte Cristo told the public that Morcerf is a traitor, and by this act he wrecked him socially. We also learned from the story, about Morcerf’s love and devotion to his family. This was another target for Monte Cristo and he succeeded in separating him from his family. Fernand was so miserable that he committed suicide.

Villffort, for my opinion is the most egoist person I have ever heard of (even though he is fictional). He would do anything and sacrifice anyone to his desire. One Quote in the book even stated so: ‘I would sacrifice anything to my ambition, even my own father’. Because of his political craving, Villfort was eager to have an innocent man imprisoned for a whole life time. I think that in this case revenge is very morally justified, because for a man such as Villefort, who was willing to put an innocent man in prison, then revenge is very morally justified. Danglars framed Dantes (wrote the letters), because he was envy and jealous at him because he gets the reward to be the captain of the Pharon (ship), and also at his spirit and self confidence Dantes had.

I think that it is very obvious why Mondego framed Dantes. He was jealous of Dantes Fiancee, Mercedes. Gaspard Caderousse, was to greedy. Monte Cristo actually gave Caderousse a chance to change and become honest, but Caderousee didn’t. He was killed while trying to rob the Count’s house. But Dantes was not revenging all the time he was a moral, good, and generous person. For example when the Abbe was dying, Dantes did not abandon him. Which shows us that Edmond Dantes is a good man.

As we can see, Monte Cristo took his revenge in a way that didn’t involve any act that was illegal. I think that revenge is morally justified in this particular story, because he did suffer a great deal, and there was a very good reason for his revenge. In every day life taking revenge is somewhat childish, but not taking it is surrendering. In my opinion revenge should be taken, and a person should be punished for a bad thing he did. The power of revenge is found in everyone of us, but we all have to know how to use it wisely.

"The Count of Monte Cristo" by Alexandre Dumas. (2016, Jun 19). Retrieved from http://studymoose.com/the-count-of-monte-cristo-by-alexandre-dumas-essay 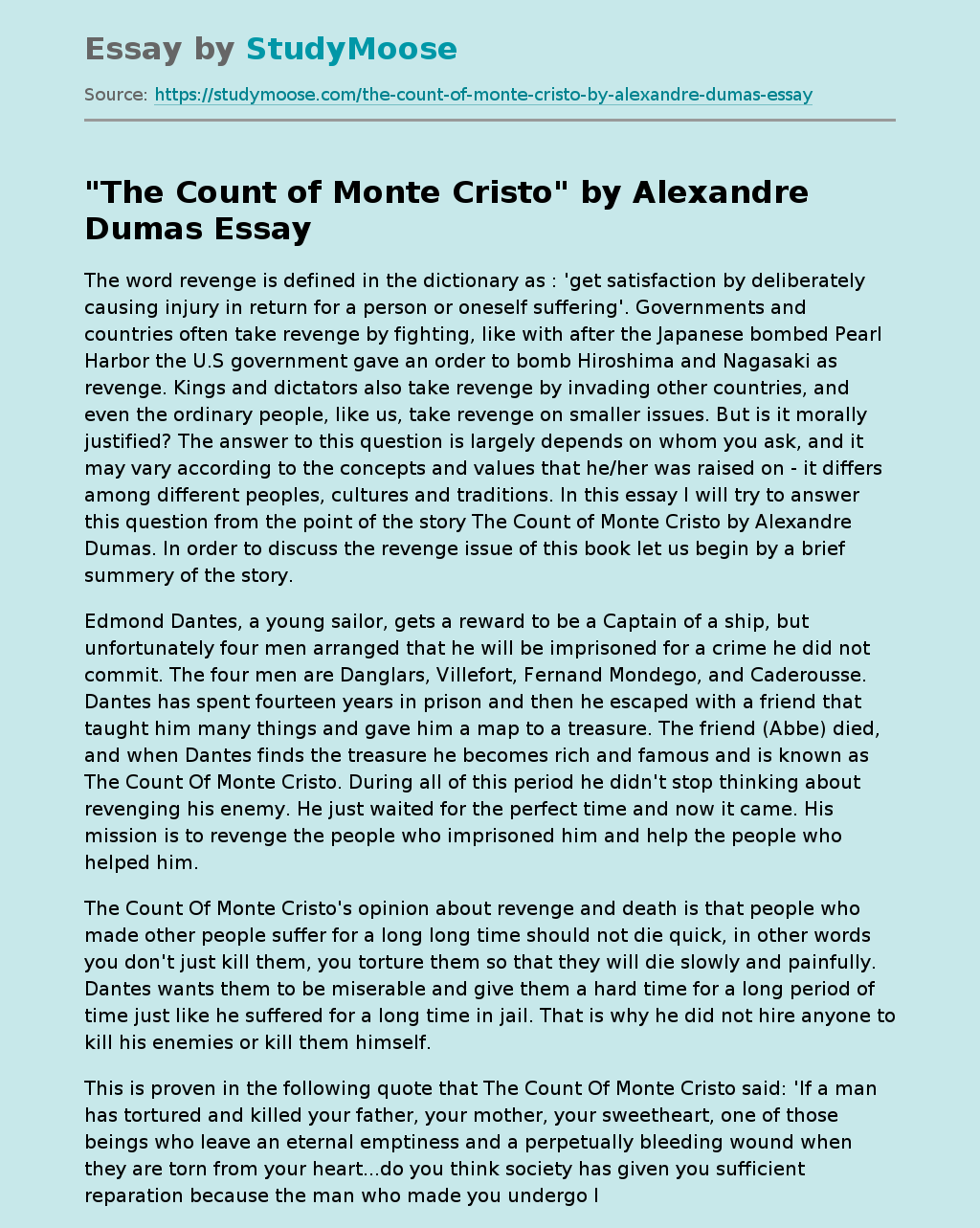