Revenge in the Great Expectations

Revenge is a primary theme in the novel Great Expectation by Charles Dickens. In this novel, many characters go out of their way to extract revenge, leading them to misfortunes such as death and imprisonment. Dickens makes it very clear that nothing positive can come from revenge through his characters and the results that come from their revenge. These acts range from petty resentment filled with passion, to long and drag out strife laced with malice, to lifelong vendettas driven by hatred.

Revenge comes in many forms—and for Orlick, his was the sort of petty resentment filled with passion, rather than stone cold hatred. In the novel, Orlick acts as the main antagonist; he is described as tardy, as Pip explained: “he was…never in hurry, and always slouching.” (102), and hostile, by telling Pip that “the Devil lived in a black corner of the forge…and it was necessary to make a fire once in seven years with a live boy and I might consider myself fuel.

” (102). Orlick was also abusive due to his outburst at Mrs Gargery when she pose her opinion on the fact that Joe was letting both Pip and Orlick have a half-holiday by saying “I’d hold you, if you was my wife. I’d hold you under the pump and choke it out of you.” Despite being mere words, from that moment on; Orlick held a grudge on both Pip and Mrs Gargery. Orlick resented Mrs Gargery for her attitude towards him. And he resented Pip for having everything Orlick wanted; at the forge, Pip was favoured and Orlick was “bullied and beat.

In Orlick’s eyes Pip “was always in Old Orlick’s way since ever you was a child.” (388) This tempts him into extracting revenge, by assaulting Mrs Gargery, he justifies his actions by telling Pip that “it was done through you,” (389) Orlick blames Pip for his misfortunes, and hates Pip to the extent that he attempted to murder him. Orlick says “I’m a going to have your life!” (388) this is an allegory—and has two meanings: one literal, and one figurative. Orlick literally wants to take Pip’s life, and kill him, depositing of his body so no one would ever know of his crime. However on the other hand, Orlick figuratively wants Pip’s life—his resentment of Pip comes from his jealousy. Orlick wishes to have Pip’s life, to be favoured, to be liked, to be a gentleman. But when his plans of killing Pip fails, and Orlick resorts to breaking into Pumblechook’s house, and robs and beats him, he is ultimately caught and imprisoned—this reveals the result of obtaining revenge, and how it will lead only to misfortunes. Nothing good can come from revenge as shown by Orlick’s eventual destination: prison. Like Orlick, Magwitch wishes to extract his revenge as well—which is a long dragged out strife between him and Compeyson. Magwitch loathes Compeyson for setting him up as a scrape goat in their trial.

Because Compeyson looked like a gentleman he had a more lenient punishment than Magwitch—who faced most of the blame for both of their crimes. Due to this, Magwitch has sworn to “smash that face of his (Compeyson’s), and I swore Lord smash mine! To do it.” (322) Magwitch was willing to give up anything, and everything to get his revenge on Compeyson. He wanted Compeyson to face his wrath and feel his suffering; Magwitch was willing to give up his chance of freedom in doing so. He could’ve “got clear of these death-cold flats likewise—if I hadn’t made discovery that he was here.” (34) In the beginning of the novel, Pip meets the escaped convict—later introduced as Magwitch, who had filed down his leg iron to the point where he could’ve broken it off, and flee from the marshes—but when he had heard Compeyson had escaped as well, he gave up his freedom, to search for Compeyson.

The guards, along with Pip and Joe later found Compeyson and Magwitch in a ditch—fighting each other. Magwitch gave up his chance to flee, and forsake his freedom in the name of revenge and was dragged back to the prison alongside Compeyson. Which begs the question, what is the result of chasing revenge? Magwitch was then sentenced to imprisonment for the rest of his life—where upon if he ever escaped again, he’d face the death sentence. Magwitch is sent off to New South Wales, where he worked several jobs—and made a handsome amount of money all of which he sent to Pip through Jaggers anonymously. It isn’t until later in the novel does Magwitch sneaks back to England as an escaped convict, under an alias and he reveals to Pip that he is Pip’s benefactor. Pip’s discovery makes him very discontent but later realizes the only way to get Magwitch out of his life is to help him escape England, on a boat.

However again on his journey to fredoom Magwitch is faced with the same dilemma, when their steam boat is intercepted by another boat and Compeyson is on it. Magwitch is forced to choose between freedom and revenge; and he again chooses the latter, tackling Compeyson, they both sink into the water—only Magwitch comes up. As expected, Magwitch is sentenced to death—immediately, only his sentence is delayed when he is stricken by illness. At this point, Magwitch’s death is ascertained, either he was going to die of illness or he was going to die at his sentence. This was the result of Magwitch’s actions; by choosing revenge over all else—not just once, but twice. These results help emphasis that revenge is nothing more than a gateway to misfortunes, and in Magwitch’s case that gate way is to death. Miss Havisham faces a lifelong vendetta driven by her hatred of all mankind. This vendetta of her, twists her personality in cruel, sadistic and vicious ways.

Out of all the characters in this novel, Miss Havisham is less active in her campaign of revenge—but she holds the longest and most pure revenge. Miss Havisham achieves her revenge through her adoptive daughter Estella. Estella is never given the opportunity to forge her own ideas and personality—instead she is objectified into a young and beautiful tool, used exclusively for avenging Miss Havisham’s broken heart. There are many instances of Miss Havisham’s cruel and sardonic personality revealed through the words she says and her actions and responses to Pip. In the beginning of the novel, she has asked Estella to play with Pip, but she refuses to play with such a common boy—in return Miss Havisham says “Well, you can break his heart.” (54) She says it in a way that makes the human heart seem almost like a toy that can be easily broken and would be irrelevant if it did so. This demonstrates Miss Havisham’s view on men, and how they should have their hearts broken as she once did—and how she’s trained Estella to do.

Miss Havisham gains much pleasure from the discomfort and humiliation of men, she has no problem hurting anyone in order to extract her revenge—not even Pip is spared, someone who had done nothing to often her, beside be born the wrong gender. Miss Havisham lets Pip believe that she was his benefactor and that Estella was his, but when this was proven untrue and Pip confronts her she says “Yes…I let you go on… [but] who am I, for God’s saje, that I should be kind!” This shows Miss Havisham’s view on life; she wonders why it is that she should be kind, when the world hasn’t been kind to her. Why should she be nice, when the world hasn’t been nice to her. Why she should love, when the world hasn’t loved her. This idea of hers later becomes the very idea that eventually destroys her.

Miss Havisham lives through Estella, she gains pleasure from seeing men swoon and pursuit Estella’s attention. She enjoys decorating Estella in jewel—almost like she was a doll to be shown off, not at all like a daughter. However, her actions lead to many consequences—because of her lack of affection for Estella, Estella then grows up to be a “beautiful creature” rather than a human. Estella claims that she has no heart so she cannot show anyone love, not even Miss Havisham, who craved attention and love. This outrages Miss Havisham, how could her own daughter not love her? The answer was simple, “I am what you have made me. Take all the praise, take all the blame; take all the success, take all the failure, in short, take me.” (277) Estella reveals the nature of their relationship, for her entire life Miss Havisham has only learned to take, and never had she given, she lived a selfish life—and was intent on acquiring revenge.

She took the happiness away from Pip, she took away Estella’s humanity and replaced it with a cold, hard, and beautiful exterior, and mostly she took away her own life. Miss Havisham froze in time, the moment she decided to avenge herself, and she gave away her life, her emotions and feelings all in the name of revenge. Like the clocks in her house, everything was frozen in Miss Havisham—because she wanted nothing more than to see other suffer as she did. Only in doing this, she forced herself to suffer even more. Miss Havisham eventually dies—alone, and unloved.

This shows the result of pursuing revenge as obsessively as Miss Havisham did; in return all she had left was a ruined estate, a monster for a daughter, relatives who were after her wealth, and a life time of sorrow. Throughout this novel, Dicken’s idea and opinion revolving around revenge becomes quite clear. It is evident that nothing good can come of revenge; and misfortunes befall those who attempt to achieve it. Dickens makes an example out of his characters, to illustrate the aftereffect of being consumed by revenge—and acting upon its temptation. Nothing good can come from trying to avenge oneself, no matter how small or large the act is: the results will all be the same.

Revenge in the Great Expectations. (2016, Oct 25). Retrieved from http://studymoose.com/revenge-in-the-great-expectations-essay 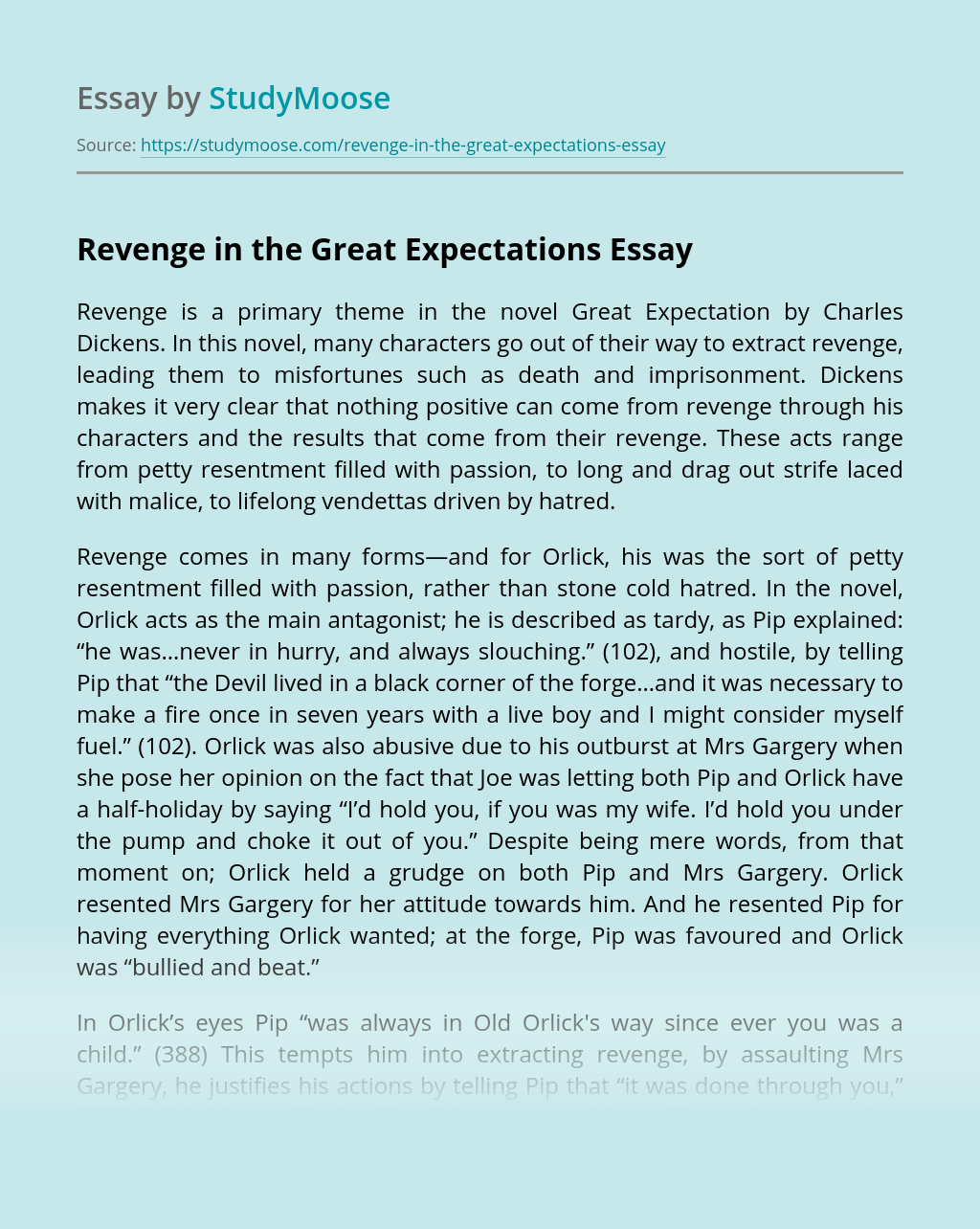 Don’t waste time
Get a verified writer to help you with Revenge in the Great Expectations
Hire verified writer
$35.80 for a 2-page paper
Stay Safe, Stay Original