Revenge in Romeo and Juliet

The want for revenge leads many of the characters in Romeo and Juliet into murderous acts which eventually leads to severe punishments and a further need for revenge. The everlasting revenge in Romeo and Juliet is first born from ancient grudge between the Capulets and the Montagues, which is ultimately settled with the tragic, abrupt unifying factor of both Romeo and Juliet’s death. Several instances within the interactions of the characters suggests that vengeance is driving force of the plot, and that consequently, there must ultimately be an end to the feuding and recoil, due to the fact that there must be a resolution after the thrilling climax.

The first factor causing revenge springs from the ancient grudge between the Capulets and the Montagues, which curiously was never fully explained in the play. This ancient grudge is the initial justification that accounts for the two family’s first dispute in the streets of Verona.

Two households, both alike in dignity,

In fair Verona, where we lay our scene,

However, after the first civil brawl, Romeo and Mercutio decide to intrude on the Capulet’s masked party. Consequently, they eventually become discovered by Tybalt due to Romeo’s easily distinguishable voice, yet Capulet discourages and scolds him from confronting Romeo and ruining the party. This humiliates Tybalt, and draws him into wanting to take the present matters into his own hands, dealing with Romeo and Mercutio some other time while his anger gradually builds.

This, by his voice, should be a Montague.

Fetch me my rapier, boy.

You’ll not endure him! God shall mend my soul!…

Well said, my hearts! You are a princox; go:

After the Montague’s intrusion on the masked party and the first civil brawl, the want for repercussion further increases within each character, especially Tybalt, eventually leading to the untimely death of Mercutio, with his last few breaths plotting revenge on both families.

Why the devil came you between us? I

was hurt under your arm…

Help me into some house, Benvolio,

Or I shall faint. A plague o’ both your houses!

They have made worms’ meat of me: I have it,

Mercutio does get his revenge on both families, since Romeo is soon banished after the slaying of Mercutio, Tybalt is slain, and accordingly, a series of adverse experiences occurs within the lives of both families. To seek revenge for his friend Mercutio’s death, Romeo murders Tybalt, who now is his own kinsman.

That late thou gavest me; for Mercutio’s soul

Is but a little way above our heads,

Staying for thine to keep him company:

After Tybalt is eradicated by Romeo, the citizens of Verona try to step in and get their own revenge for the Montague’s and Capulet’s fighting in the fair streets of Verona because they are disturbing the peace.

Which way ran he that kill’d Mercutio?

Benvolio replies to the citizens statement by announcing that Tybalt made threats and killed Mercutio first, and from that, Romeo received a newly contrived revenge.

An envious thrust from Tybalt hit the life

Of stout Mercutio, and then Tybalt fled;

But by and by comes back to Romeo,

Who had but newly entertain’d revenge,

And to ‘t they go like lightning, for, ere I

Could draw to part them, was stout Tybalt slain.

And, as he fell, did Romeo turn and fly.

Lady Capulet soon afterwards gets her revenge for Romeo killing her kinsman. She pleads to the Prince to put Romeo at fault, since he killed Tybalt, believes that Romeo is telling a lie, and also because of her ancient grudge against the Montagues.

He is a kinsman to the Montague;

Affection makes him false; he speaks not true:

Some twenty of them fought in this black strife,

And all those twenty could but kill one life.

I beg for justice, which thou, prince, must give;

Because of this second quarrel, which the Prince has strictly forbidden, the Prince decides to set punishments for this pointless fighting, and decides to set forth his vengeance upon Romeo for quarreling in Verona again and disturbing the tranquility.

And for that offence

Immediately we do exile him hence.

I have an interest in your hate’s proceeding,

My blood for your rude brawls doth lie a-bleeding;

But I’ll amerce you with so strong a fine

In response to his exile, Romeo threatens to commit suicide in Friar Lawrence’s cell. Friar Lawrence then attempts to calm Romeo down, eventually leading into a humiliating conversation for Romeo as the Friar gets his revenge for Romeo’s threats and groans about the banishment.

Art thou a man? Thy form cries out thou art.

Thy tears are womanish; thy wild acts denote

The unreasonable fury of a beast.

After hearing about Romeo’s banishment, Juliet becomes distressed, and locks herself in her room. Old Capulet converses with Paris about her change in heart, and converses with him about the details of the wedding. However, once Capulet tells Juliet about the upcoming wedding, Juliet refuses to marry Paris, causing Capulet to erupt in a rage, and in revenge, cursing and threatening Juliet for not accepting the marriage to Paris.

I tell thee what: get thee to church o’ Thursday,

Or never after look me in the face:

Speak not, reply not, do not answer me;

My fingers itch. Wife, we scarce thought us blest

That God had lent us but this only child;

But now I see this one is one too much,

And that we have a curse in having her:

This is Capulet’s revenge for Juliet’s refusal to marry Paris, and putting all the effort that he put into the wedding to waste. This incident springs into yet another reprisal. Juliet asks the once faithful nurse to help put off the wedding, however, she surprisingly suggests that Juliet marry Paris, since she considers him a more fit husband over Romeo. Juliet doesn’t want to be an unfaithful bride to Romeo, and in revenge, scorns the nurse in retaliation for her suggestion to marry Paris and unwillingness to aid her in the postponing of the wedding.

Is it more sin to wish me thus forsworn,

Or to dispraise my lord with that same tongue

Which she hath praised him with above compare

So many thousand times? Go, counsellor;

Thou and my bosom henceforth shall be twain.

I’ll to the friar, to know his remedy:

The final predominant act of revenge in Romeo and Juliet occurs in response to Juliet’s refusal to marry Paris. She fabricates death, so that she will be able to sneak to Mantua with Romeo. Her death is her revenge for Capulet’s forcing her to marry Paris and threatening her with banishment.

O, bid me leap, rather than marry Paris,

From off the battlements of yonder tower;

Or walk in thievish ways; or bid me lurk

Where serpents are; chain me with roaring bears…

And I will do it without fear or doubt,

Thus, with her death, her parents become dismayed, and won’t be able to experience the joys that they were hoping for in marriage, as expressed in the last scenes of the play. The Prince then dictates to both families about the consequences of their wearisome hate, and the extensive sequence of vengeance is finally ends, with the Prince carrying out the final act of revenge by punishing both families for the death Mercutio and all the grievances that have been endured..

Where be these enemies?-Capulet, Montague,

See what a scourge is laid upon your hate,

That heaven finds means to kill your joys with love,

And I, for winking at your discords too,

Revenge is the key to the advancement of the complex plot in Romeo and Juliet. It causes events to happen that would never have happened otherwise, and creates a suspenseful mood as well as several other themes and morals to be incorporated into the play. However, this ageless vengeance can only be stopped by the deaths of both family’s children, and in the process of that, several others suffered the vile consequences of revenge. The definitive central idea of Romeo and Juliet characterizes how malevolence can eventually lead to drastic encounters, and that they can overshadow several other important occurrences in the lives of those affected by the discord. In Romeo and Juliet, this disarray and the portentous threats were resolved too late, and only occurred with the devastating unifying influence of the loss of each family’s child.

Revenge in Romeo and Juliet. (2016, Jun 25). Retrieved from http://studymoose.com/revenge-in-romeo-and-juliet-essay 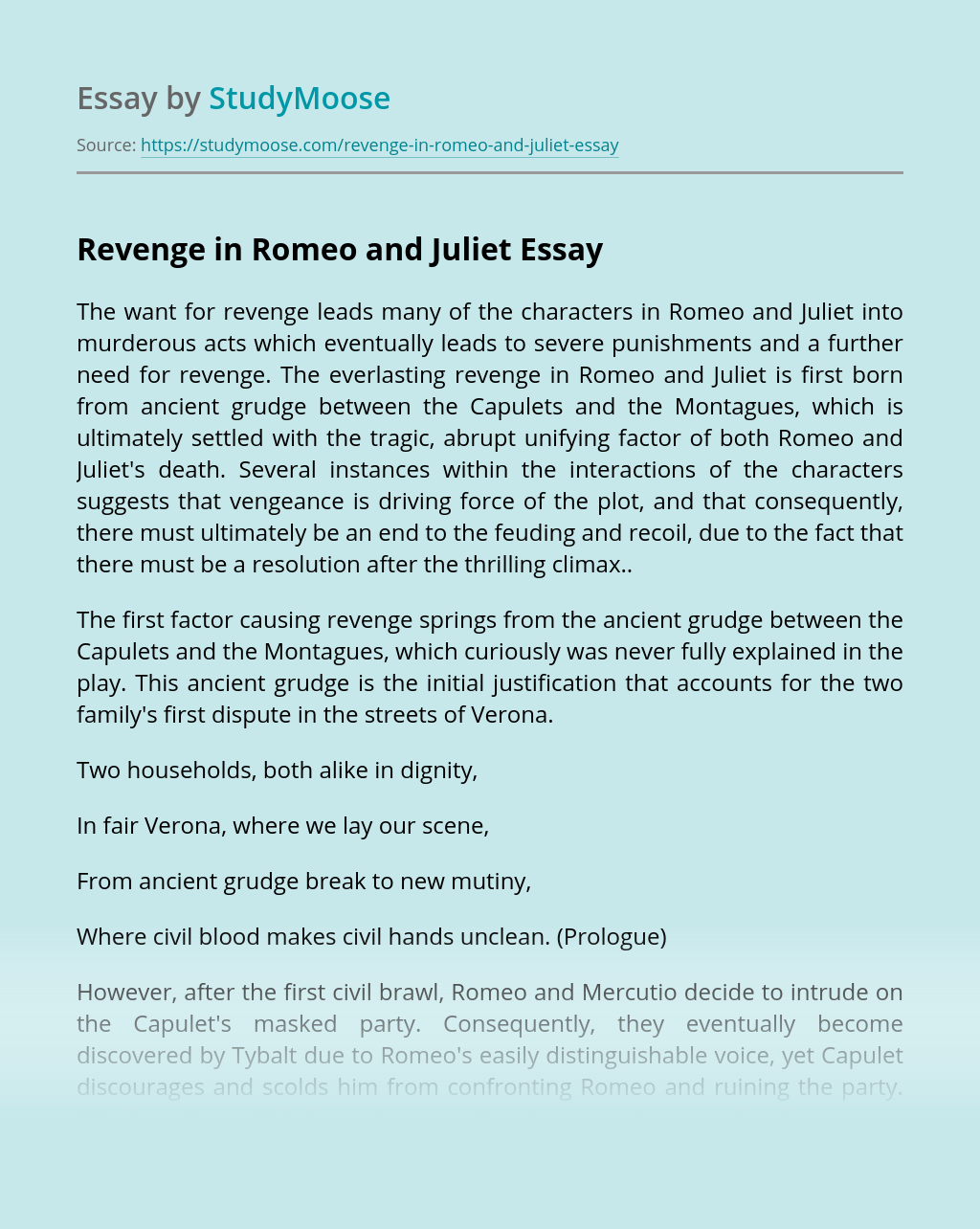 Don’t waste time
Get a verified writer to help you with Revenge in Romeo and Juliet
Hire verified writer
$35.80 for a 2-page paper
Stay Safe, Stay Original