Predestination and Free Will in Christianity

Predestination does not interrupt free will. Actually the two go hand in hand. Our God is such a loving God that through his divine will he gave us free will. God did not predestine anyone to salvation or damnation. He has the Divine foreknowledge of who will live a righteous life and who will follow the path to damnation. Knowing this, He gave us the option to choose our path in life, therefore, placing our salvation in the decisions that we choose throughout our lives.

Don't use plagiarized sources.
Get Your Custom Essay on Predestination and Free Will in Christianity Just from $13,9/Page

Christians believe“16 For God so loved the world that he gave his one and only Son, that whoever believes in him shall not perish but have eternal life.”1 This is why we are called Christians due to Christ. God gave the ultimate sacrifice so that mankind can choose his own destination. . In my opinion, Christians of, all people, should believe that free will and predestination are not separates entities.

The first question that one should ask is what is predestination? Predestination to some is the belief that God, who has sovereignty over all creation, uses His divine foreknowledge to predestine some humans to receive everlasting salvation and some to suffer an eternity of damnation. In comparison, the Christian belief is that God does have foreknowledge but does not use this knowledge to save or condemn –God does not predestine.

Therefore, the next question should be “how does God determine who goes to heaven and who goes to hell?” Well the one true Christian answer is that no one, not even the elect, gets into heaven without Christ. So does Christ choose you or do you choose Christ? A Christian must know Christ prior to choosing Him. There are two categories of theologians that argue how we come in contact with Christ, the monogistic and synergistic view. The bible verse Isaiah 53:1 “Who has believed our message and to whom has the arm of the Lord been revealed?”2 can be used as an example. The monogistic view is that God reached out his arm to save the people that he foreknowingly knew would choose Christ and predestined them to have eternal salvation. This view of salvation removes humankind’s gift of free will. The other part of humanity, however, would be left to receive eternal suffering. The synergistic view is that God “offers” His hand out to the true believer to save them and in return they have the free will to choose it, accept Christ and receive eternal salvation. The monogistic position defines predestination.

The controversy of predestination started with St Augustine’s interpretation of Apostle Paul’s bible verse Romans 8:29: “29 For those God foreknew he also predestined to be conformed to the image of his Son, that he might be the firstborn among many brothers and sisters.”3 True Christians interpret this verse believing that when Paul speaks of foreknew, he is referring to God’s divine foreknowledge of sight. Christians believe that God is able to look through the windows of time and foresee those who will use the free will given to walk with him throughout their life. He did not predestine, as in verb form, but he has always known the path of our destination, “pre” mankind. God would like for all of His children to conform to the image of Christ and become eternal brethren and even though God knew each individual person’s choice, He still gave us the option to choose our path in life. Hence, God placed humanity’s salvation in our own individual hands through the grace free will. Augustine’s interpretation, in contrast, was translated as “For God knew his own before ever they were, and also ordained that they should be shaped to the likeness of his son, that he might be the eldest among a large family of brothers.”4 This interpretation, accepted by many and also scorned by many, revealed a different God than Paul referred to.

Augustine believed God’s foreknowledge and predestination was not centered upon the deeds of humanity. Instead, he believed that God, who has Divine autonomy to do as he pleases, selected his chosen at his discretion and predestined them to eternal salvation. Through this monogistic view, the gift of free will is nonexistent, therefore removing any chance of humanity’s’ ability to save itself from reprobation. Augustine centered this monogstic view on Adam’s fall from grace. Adam’s fall from God’s grace resulted in humanity’s fall as well, thereby removing the gift of free will, leaving humanity totally dependent upon God’s “merciful grace”. Free will to make righteous choices throughout one’s life is not a consideration. He centers his belief around grace not free will because he believed that none of humanity deserved redeeming and it is only through God’s grace that some are predestined for salvation. Only the elect will receive God’s grace and salvation and no one knows the number or names of the elect but God himself. In other words man does not need any type of religious order, because, according to Augustine, we are to live throughout our lives hoping that we are one of the “elected” that God decides to “grace” with exaltation.

John Calvin, another theologian, also preached predestination. John Calvin, however, sermonized on double predestination. He stated that “out of the common multitude of men some should be predestined to salvation, others to destruction.”5 According to Calvin double predestination is when God predestines humanity to salvation and also to damnation. He believes that not only does God predestine the elect to receive his grace and know Christ for an eternity, but he also predestines those he will not allow to know Christ and sentence them to eternal suffering. His deduction for this belief, as was Augustine’s, was Adams fall from grace. Calvin expounds on the belief that God only creates perfection, thereby, Adam created in God’s image, was created perfectly. However, through Adam’s gracious gift of free will, Adam chose unwisely and “since in Adam all are sinners, deserving of eternal death, it is obvious that nothing but sin will be found in men”6 causing the whole of humanity to suffer the loss of God’s grace.

In other words, Calvin’s view is God does not condemn man to damnation; man condemned himself through God’s grace and free will. Calvin believes that humanity does not deserve God’s grace and it is not for us to reason why or how God decides who receives redemption and who reprobation. Therefore, to answer the questions afore mentioned, God does not determine who will receive salvation or damnation: we do. God does not autonomously destine a chosen few elect to know and love Christ because in 1 Timothy 2:4 it is written that God ” desires all men to be saved and to come to the knowledge of the truth.”7 He gave us free will to live our lives as we please. God reaches out his hand to every soul on earth but it is ultimately our choice to reach out and grab it. Through God’s merciful grace of free will, he has foreknowingly placed us in charge of our own destiny.

Predestination and Free Will in Christianity. (2016, Mar 04). Retrieved from https://studymoose.com/predestination-and-free-will-in-christianity-essay 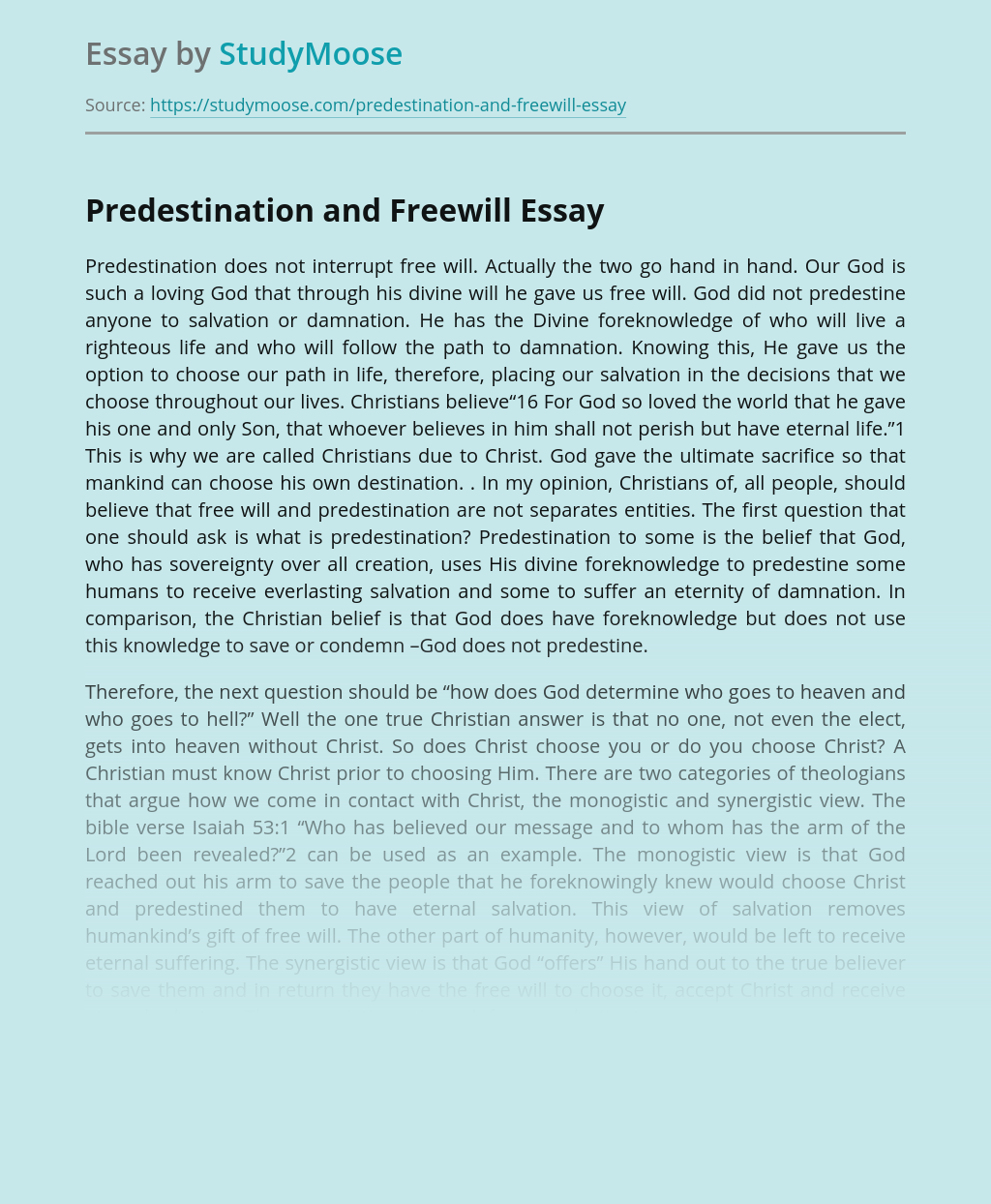 Broken Homes and Right To Freedom Of Religion

Rate this post He made it seem like that’s the reason I ended up being a secularist. Having a disappointment growing up, maturing without a daddy or being in a damaged household prevail mistaken beliefs that the theists consider the secularists. Both of my moms and dads consider themselves as snack bar Catholics, for short,...

Meaning of Baptism for Christianity

Get Essay
Christ in the Old Testament

Rate this post The Old Testament was like a world where God would unexpectedly appear to humans and interact with His creations. The main reasons for this particular action was to inform that person of what He was about to do. God would also use his appearances as a way to to strengthen and encourage...

Rate this post The greatest modern name that come into mind when one speaks of faith and God is Professor Bruce W. Longenecker. The name stands tall, undefeated and unquestioned in the golden pages of western Christianity, reflecting the hearts and minds of people of their times and the times to follow. He has devoted...

What Does the Bible Say About Tattoos and Body Piercings?

Rate this post Answer: The Old Testament law commanded the Israelite, “Do not cut your bodies for the dead or put tattoo marks on yourselves. I am the LORD” (Leviticus 19:28). So, even though believers today are not under the Old Testament law (Romans 10:4; Galatians 3:23-25; Ephesians 2:15), the fact that there was a...

Rate this post The religion that I was raised is Baptist. I have heard that southern Baptists are very strict but I did not ever have to do anything strict. My parents took me to church when I was younger but after about the age of 10 I rarely went again. They got divorced and...

Interpreting a Passage from James

Rate this post The passage to analyze in the Book of James is James 1:12-17, which speaks about being tempted and why it is important to overcome trials and temptations. This passage encourages all believers on the importance of enduring temptations, as they will get a reward in heaven (James 1: 12). This shows that...