Fate and Predestination in Moby Dick

Fate and predestination are two entirely different themes found in Herman Melville’s Moby Dick. Fate and predestination are not one and the same. Although most people might unknowingly use the terms interchangeably, there is a very real and distinct difference. Fate is determined by man, and is the end result of a free will action. In Moby Dick, Ahab’s free will and belief that he is driven by destiny determines his own fate, the fate of his crew, and results in the inevitable destruction of the Pequod.

Don't use plagiarized sources. Get your custom essay on
“ Fate and Predestination in Moby Dick ”
Get custom paper
NEW! smart matching with writer

Melville often uses symbolism to indicate the existence of fate. The Pequod itself is a symbol of the ill-fated journey to conquer the great white whale. On the other hand, predestination is a theological doctrine in which God predetermines the outcome of all events. One assumption of predestination is that God will save some souls while condemning others to eternal damnation. If that distinction is made and held to be true, then fate leaves open the possibility that free will by man exists, while predestination eliminates it all together.

And, freewill is important in setting the many complex themes in Moby Dick. Moby Dick is narrated by a sailor known only as Ishmael. The story opens: “Call me Ishmael. Some years ago—never mind how long precisely—having little or no money in my purse, and nothing particular to interest me on shore, I thought I would sail about a little and see the watery part of the world. It is a way I have of driving off the spleen, and regulating the circulation.

Whenever I find myself growing grim about the mouth; whenever it is a damp, drizzly November in my soul; whenever I find myself involuntarily pausing before coffin warehouses, and bringing up the rear or every funeral I meet; and especially whenever my hypos get such an upper hand of me, that it requires a strong moral principle to prevent me from deliberately stepping into the street, and methodically knocking people’s hats off—then, I account it high time to get to sea as soon as I can. This is my substitute for pistol and ball. With a philosophical flourish Cato throws himself upon his sword; I quietly take to the ship.

This long passage tells the reader all that is needed about Ishmael. First, he’s educated and intelligent. Perhaps he is a teacher. He talks about whaling ships being his “Yale College and Harvard . ” So, Ishmael is qualified to act as narrator for the tale. He is also philosophical. Throughout the story Ishmael reflects on life aboard the Pequod. He also delves into all sorts of academic subjects as well as theology, free will, morality, destiny and fate. However, Ishmael isn’t going to sea to find himself. In fact, he believes all men on whaling ships are lost.

Whaling is an inherently dangerous occupation, so taking a berth aboard a whaling ship is Ishmael’s attempt to commit suicide. Ironically, he survives. Ahab and Ishmael are opposites of each other. Ahab dies and Ishmael lives. Essentially, Ishmael is needed to narrate the story because he is the opposite of Ahab who is driven by what he believes to be predestination. Ishmael is trying to create his own fate by killing himself. But, he is still more philosophically grounded than Ahab. For example, in Chapter 96 Ishmael has an image about daydreaming and suicide: “There is a wisdom that is woe; but there is a woe that is madness.

And there is a Catskill eagle in some souls that can alike dive down into the blackest gorges, and soar out of them again and become invisible in the sunny spaces. And even if he for ever flies within the gorge, that gorge is in the mountains; so that even in his lowest swoop the mountain eagle is still higher than other birds upon the plain, even though they soar. ” He can see both the literal as well as the metaphorical meaning in this image. Ahab can’t make the distinction. Ishmael has been to sea before and isn’t driven by fate, but he does know whaling is a dangerous business in which injury and death can occur.

So, through an act of free will he is tempting his own fate. However, Ishmael in the course of his narrative does make many references to fate. As described, the whaling vessel Pequod is a symbol of doom. Gloomy, black and adorned with whale teeth and bones, the Pequod is a floating coffin named after a Native American tribe that didn’t survive long after the Europeans arrived in North America. It should be noted that there are times in the story when Ishmael disappears for long stretches and replace by soliloquies often delivered by Captain Ahab.

Ahab is the one-legged captain of the Peqoud. From the time his leg is bitten off by a whale during a previous journey, he has pursued the huge white whale. Moby-Dick is Ahab’s nemesis which is misunderstood, mysterious, and difficult to interpret. But Ahab attempts to do just that; his efforts are futile and eventually fatal. In fact, Ahab interprets the whale as being the physical incarnation of evil living in the world and believes against common sense that he can defy the natural world and destroy the whale.

“All that most maddens and torments; all that stirs up the lees of things; all truth with malice in it; all that cracks the sinews and cakes the brain; all the subtle demonisms of life and thought; all evil, to crazy Ahab, were visibly personified, and made practically assailable in Moby Dick. He piled upon the whale’s white hump the sum of all the general rage and hate felt by his whole race from Adam down; and then, as if his chest had been a mortar, he burst his hot heart’s shell upon it. ” This quote, from Chapter 41 indicates that Ahab lacks the ability to understand the world around him.

Ahab can’t see that the loss of his leg is a result of his dangerous occupation, but, only sees it as evil persecuting him. As a result, he believes it is his inescapable destiny to destroy the evil. And, this soliloquy from Chapter 37 show’s Ahab’s over confidence and belief that he is predestined to destroy the whale. “Come, Ahab’s compliments to ye; come and see if ye can swerve me. Swerve me? ye cannot swerve me, else ye swerve yourselves! man has ye there. Swerve me? The path to my fixed purpose is laid with iron rails, whereon my soul is grooved to run.

Over unsounded gorges, through the rifled hearts of mountains, under torrents’ beds, unerringly I rush! Naught’s an obstacle, naught’s an angle to the iron way! ”Ahab does several other things in this passage as well. First, he is attempting to inspire his crew to help him in his quest. Finally, and more importantly, Ahab he feels he has no control over his behavior. In the end, it is Ahab’s irrational behavior and free will, which he very much had control over, that resulted in his death, the destruction of the Peqoud, and demise of the crew.

Therefore, predestination had nothing to with the destruction of the ship and crew. Even in his last moments Ahab believed it was predestination that destroyed him. “Towards thee I roll, thou all-destroying but unconquering whale; to the last I grapple with thee; from hell’s heart I stab at thee; for hate’s sake I spit my last breath at thee. Sink all coffins and all hearses to one common pool! and since neither can be mine, let me then tow to pieces, while still chasing thee, though tied to thee, thou damned whale!

Thus, I give up the spear! ” Ahab curses the whale and his fate as he is going under. Moby Dick disappears and everyone goes under except Ishmael. Moby Dick is a complex tale with too many themes and intricacies to delve into in just four pages. However, it would have been very difficult to narrate the story any differently than what Melville did. Ahab didn’t understand fate or predestination. Yes, he believed he was predestined to conquer evil, but that was only because his view of the world was so literal, he couldn’t see it any other way.

If he did have a clearer view of life and the world, he would have seen that losing his leg was an occupational hazard and would never went have gone off on a monomaniacal quest in the first place. Right up until the moment he started to go under the water, Ahab couldn’t see how his own risks could lead to his death, and he didn’t believe he would ever lose his quest to kill the whale and eradicate evil. Ishmael knew the risks involved from the very beginning of the voyage. That was his motivation for going on the journey. So, man created the twist of fate that allowed Ishmael to survive and Ahab to perish.

Fate and Predestination in Moby Dick. (2016, Nov 08). Retrieved from https://studymoose.com/fate-and-predestination-in-moby-dick-essay 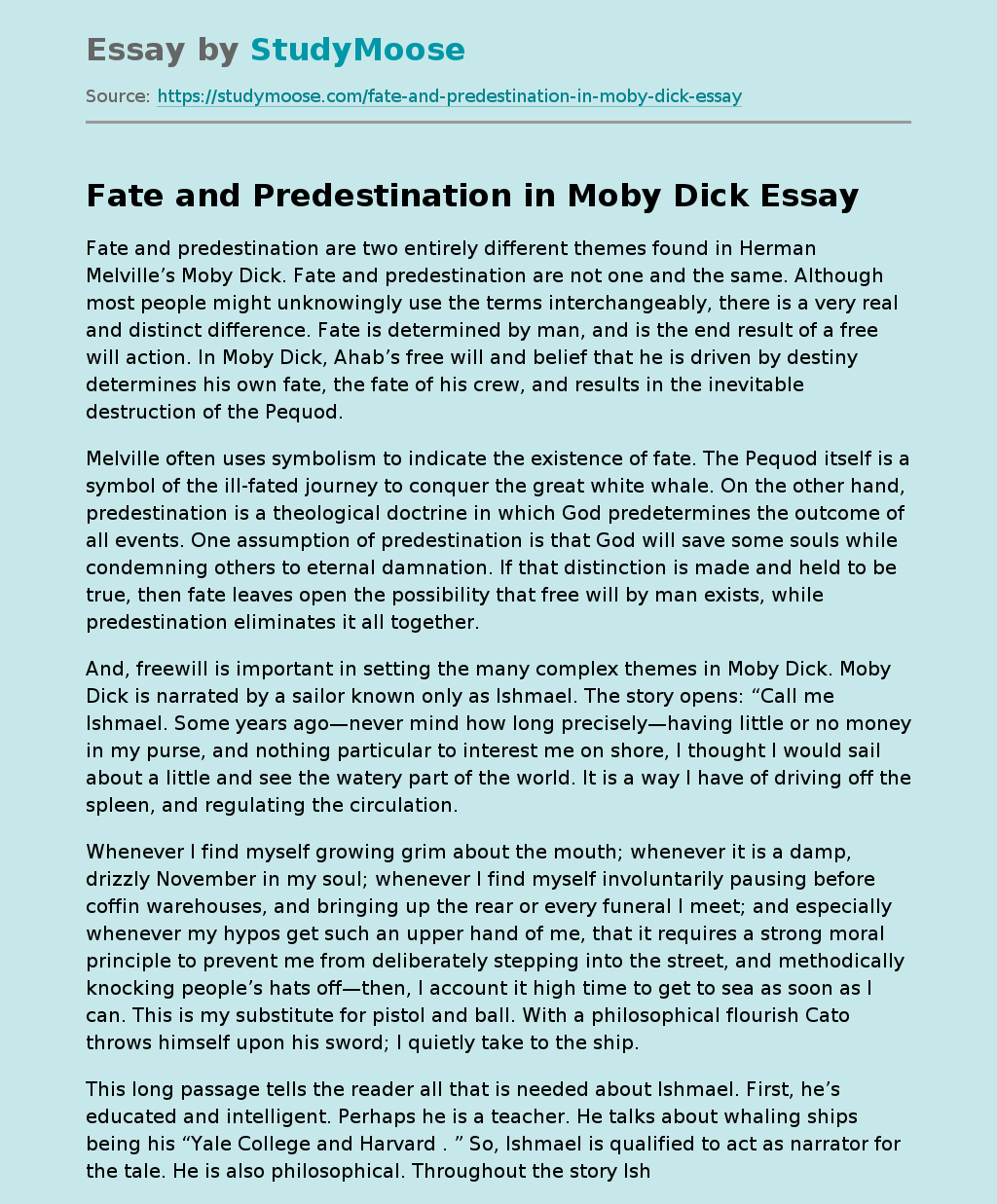