­­Duality of Man in "Moby Dick"

In Herman Melville’s novel, Moby Dick, every character is a symbol of the good and evil sides of humanity. However, none of the characters represent pure evil or pure goodness. Even Melville’s description of Ahab suggests he is driven insane by one goal, is given a chance to be seen as a frail, sympathetic character. Ishmael represents the character with the best out of the crew, though his survival is unclear because he never had a direct adversary to overcome.

Don't use plagiarized sources. Get your custom essay on
“ ­­Duality of Man in “Moby Dick” ”
Get custom paper
NEW! smart matching with writer

He has his moments when evil thoughts pervade his mind. The unclearness of morals in the universe is prevalent throughout Herman Melville’s Moby Dick.

The outcome of choosing good or evil cannot be seen as favorable or just. Ahab, is the main human character of the novel. He is also the captain of the vessel and is seen as the representative of evil. Then there is Ishmael the young seaman making his first real voyage. He is pure in comparison with Ahab because he lacks the need for revenge.

Ultimately, it is the dichotomy between the respective fortunes of Ishmael and Ahab that the reader is left with. Herein lies a greater moral ambiguity than is previously suggested. Although Ishmael is the sole survivor of the Pequod, it is notable that in his own way, Ahab fulfills his desire for revenge by ensuring the destruction of the White Whale alongside his own death. Despite the seeming superiority of Ishmael’s destiny, Melville does not explicitly indicate so.

On the contrary, he subtly suggests that Ishmael’s survival is lonely and empty upon being rescued: ‘It was the devious-cruising Rachel, that in her retracing search after her missing children, only found another orphan.

’ (521 Melville) That single instance of the of loneliness applied to Ishmael speaks volumes when taken in light of the destruction of the Pequod and her crew. Melville’s inclusion of Ishmael’s survival suggests that Ishmael’s survival is an afterthought to the fate of Ahab and the rest of his crew. Ishmael’s quiet words at the beginning of the chapter, ‘Why then here does any one step forth?… Because one did survive the wreck,’ (521 Melville) indicate a deep humility on Ishmael’s part. He sees his victory in life as an empty one. The question is then raised of why Ishmael is the sole survivor. It is clear that Ishmael significantly differs with Ahab concerning their respective perspectives of the White Whale. Ishmael clearly indicates how disagreeable he finds the mission and mental state of those around him: ‘…the rushing Pequod, freighted with savages, and laden with fire, and burning a corpse, and plunging into that blackness of darkness, seemed the material counterpart of her monomaniac commander’s soul.’ (391 Melville) Here, Ishmael breaks his usual detached observance and boldly distinguishes himself from Ahab’s mission and those whom Ahab has recruited to aid him. Ishmael further distinguishes himself from the rest of the crew by being the sole non-exploiter of whales in general. Melville makes it clear early on that Ishmael initially chooses to ship on the Pequod for the experience value of whaling. Whereas Ishmael is terrified by the white whale, Stub, one of the crewman, sees economic gain in the valuable whale oil, hinted at by his overbearing gloating upon his first kill. To Ahab, the whale is an emblem of pure evil.

Even prudent, rational Starbuck looks on the whale as a dumb animal, which it is his duty to exploit. This is the distinction that Ishmael has with the other members, their final goals of the voyage. The terror that Ishmael perceives is a consequence of his own vague fear of the whale’s emptiness in meaning. What Ishmael fears is the mystical, terrifying manifestation of white in the natural world. Ishmael is distinguished from the rest of the crew in his ability to consider the perspectives of the others. In his role as narrator, Ishmael’s ability to be detached and analyze the viewpoints of those around him is what saves him. Also, throughout the novel Ishmael is the only one to observe the Moby Dick as something besides another kill, but rather an animal worth admiring. Unlike the values the others place on the whale, Ishmael is capable of viewing the whale solely for its being, as one of the many viewpoints that he considers through the course of the novel. In contrast, Ahab’s views of the whale are singular and focused. Melville describes it as a monomaniacal obsession, but it is clear in Ahab’s complexity that there are other factors at work. Ahab remains virtually one dimensional until he freely shares his feelings with Starbuck. By allowing the reader to see the subtle complexities of Ahab’s obsession, Melville makes it clear that Ahab is not an inhuman machine of revenge. Ahab’s questioning of ‘what nameless, inscrutable, unearthly thing is it; what cozening, hidden lord and master, and cruel, remorseless emperor commands me?’ (301 Melville) replaces his previous portrait as the depraved lunatic.

The reader is now left to question whether Ahab is indeed maddened by his obsessive hatred, or simply overwhelmingly determined, but blinded by his anger. Although he is swallowed up by the sea before he can be fully aware of his success, he does expend his last moments fulfilling his mission. At the last, he proclaims, ‘from hell’s heart I stab at thee; for hate’s sake, I spit my last breath at thee.’ (519 Melville) Whatever Ahab’s motivations, it cannot be discounted that this objective of is his being realized even with his dying breath. With the characters of Ishmael and Ahab structured into their respective places, the stage is set for the novel’s finale. The ambiguous circumstances of the end are further complicated. Melville portrays whales methodically throughout the novel, approaching them from a scientific and even poetic points of view. Despite the relative mildness of the novel’s previous animals, Melville makes the white whale markedly different: ‘Moby Dick seemed combined possessed by all the angels that fell from heaven.’ (518 Melville) Despite the seemingly lunacy implied by Ahab’s insistence that the white whale is an evil force, the ruthless efficacy with which Moby Dick defends himself seems to vindicate Ahab in the end. It is this mutual malevolency that is the impetus for the downward spiral of violence begetting violence that culminates in the mutual destruction of Ahab and Moby Dick. In being left to evaluate the respective fates of Ishmael and Ahab, one is forced to examine what each character has accomplished or lost in his choice of actions. Ishmael is fortunate enough to be the sole survivor of the Pequod, but it is left unclear to what traumas he faces. Ahab ultimately succeeds in his goal, but does so at the expense of his life, his ship and his crew.

Melville makes no attempt to delineate for the reader a moral hierarchy, and in doing so, remains ambiguous. The reader is then left with the possibility of assigning symbolic relations between the characters. If looked at from the grandest scale, it is possible to see the whale and the sea as a morally ambivalent cosmos. If so, then the fault of Ahab and the crew of the Pequod is their futile attempt to master a force of nature far beyond their comprehension, and are destroyed for it. The image of Ishmael floating helplessly upon the ocean, without even the wreckage of the Pequod then becomes a strikingly lonely image of humanity adrift in a universe neither good nor evil. The uncertainty of each character’s final outcome leads one to wonder whether good or evil has triumphed in this novel. 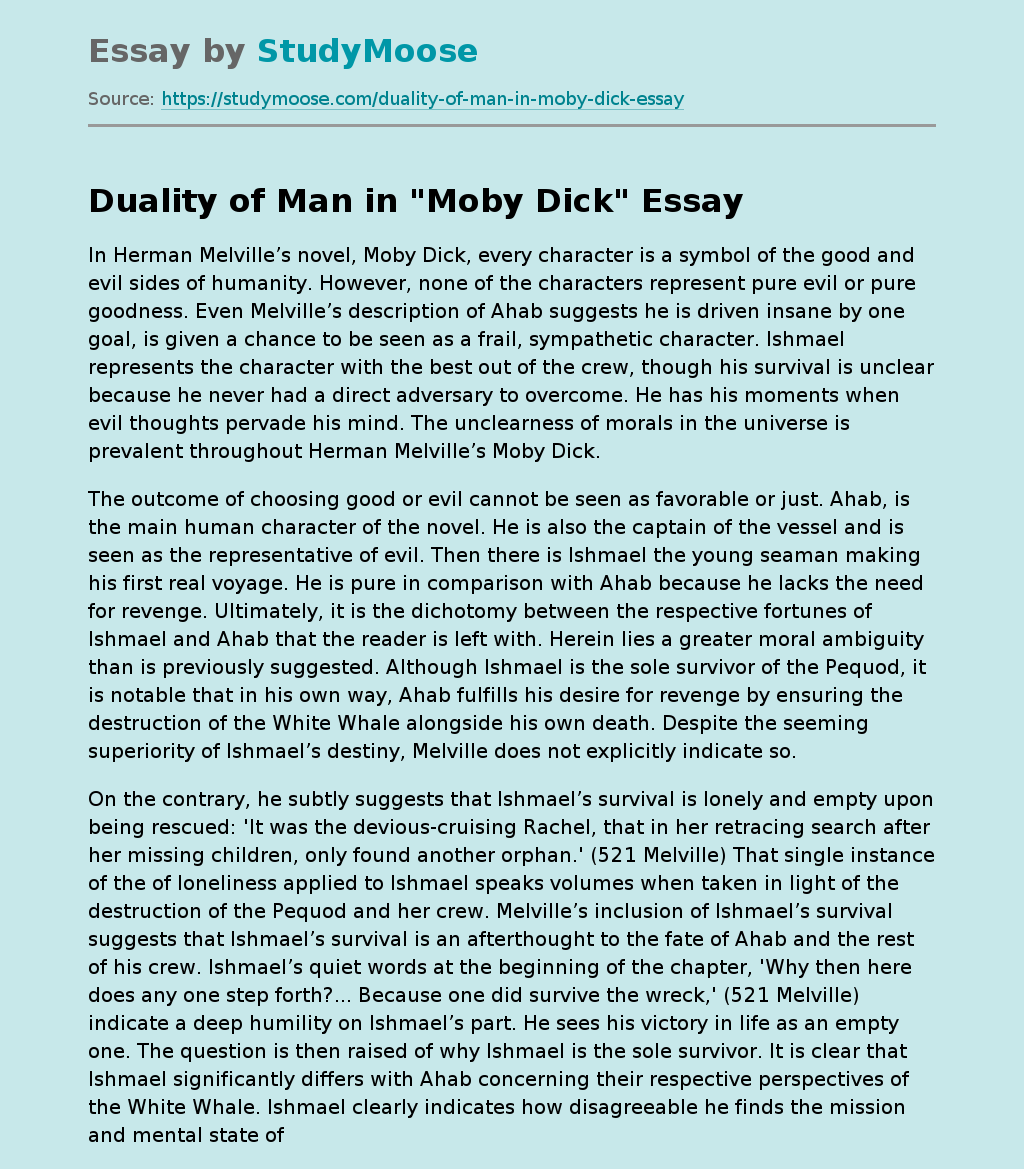