In the tragic novel Moby Dick by Herman Melville, Captain Ahab’s maniacal obsession of revenge, his negligence for his safety and others, and his seemingly cool rationality among the symbols and omens of his fate comprise two central themes of Moby Dick; Sanity can only exist when someone moderates or relinquishes strife and anger, and mankind’s struggle with a painful or arbitrary fate. Ahab’s madness also directly contributes to the voyage’s demise. Throughout the novel, Ahab reveals his obsessive and vengeful character every time he interacts with the crew, which is not often.

Don't use plagiarized sources. Get your custom essay on
“ Analysis of “Moby Dick” by Herman Melville ”
Get custom paper
NEW! smart matching with writer

He acts such as a hermit, occasionally peeking through his chambers to ask if his crew or passing ships have sighted Moby Dick. He blatantly discounts the infinite omens of death and destruction, determined to undermine the crew, world, and God. Ahab’s seering free will and irrational plans to kill Moby Dick conform into a dangerous mix of a vengeful quest that is doomed from the start.

Recovering on board his previous ship and hindered by recollections of his past encounter with Moby Dick, Ahab is left legless and increasingly insane. Eventually, he blames all shortcomings on Moby Dick. He manages to keep his passionate hatred for Moby Dick under control for a while, yet it still intensifies beneath the surface. Ahab can even be perceived as (somewhat) sane in certain instances, but his motives and plans to slay Moby Dick are completely insane.

He concludes to sacrifice everything in order to take vengeance on the White Whale.

Once the Pequod is far from the port in Nantucket, Ahab eerily reveals his wicked and fiendish quest for the legendary White Whale, forcing the crew to swear their unconditional aid and support in the endeavor. Melville resorts to calling Ahab a “monomaniac”, a term that suggests Ahab’s insanity encompasses only one thing, and that he only appears insane when breached in that single instance. As the story plays out, the reader grasps the full scale of Ahab’s monomania and how it affects the crew and plot as a whole. His character brings about themes of vengeance and mankind’s strong distaste for unexplainable happenings of a bad fate. In that sense, Ahab’s madness can be seen in a new light. Moby Dick illustrates the phenomenon of human anger combined with free will, and it’s catastrophic effects. 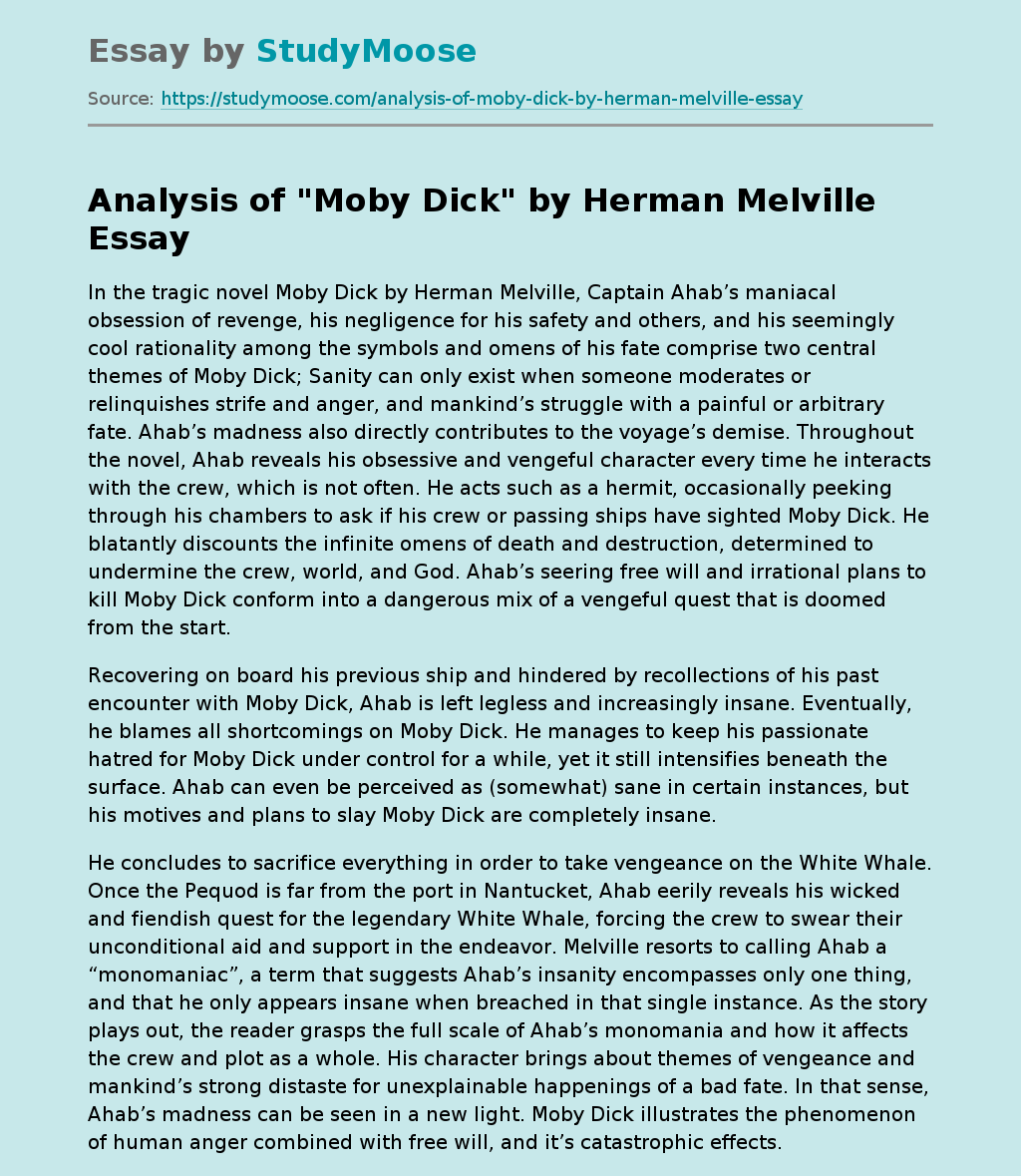