Herman Melville’s book, Billy Budd, Sailor, chronicles the happenings on a British naval ship called the Bellipotent. Set in the late 1700s, the story follows Billy Budd, a handsome, likeable sailor whose innocence earns him the comradery of all the sailors on board, save one. The master-at-arms, cruel-hearted Claggart, who envies Billy’s carefree spirit and kind nature. Melville goes on to detail the conflict between Billy and Claggart, and how both of them come to their respective ends. Life aboard the Bellipotent can be interpreted as a microcosm, or metaphor for the world and society as a whole.

Don't use plagiarized sources. Get your custom essay on
“ An Analysis of the Main Themes in the Book Billy Budd Sailor by Herman Melville ”
Get custom paper
NEW! smart matching with writer

It is easy to label the characters as representatives for stereotypes of people one often encounters in life, similarly to William Golding’s characters in his novel, Lord of the Flies where different characters stand for ideas like order, chaos, and logic.

But more interesting is the way Melville confronts the reader with themes and controversial topics concerning the way society operates by using the ship as a mini-society where he depicts situations that challenge basic morals and the way the world is perceived.

Melville especially concentrates on topics such as nature versus nurture (is evil really inherent, or is it learned?), fate versus free will (can misfortune be avoided, or is conflict an inevitable part of life?), and conscience versus law (should crimes be judged on intent or solely on consequence?). Melville meets each of these topics and uses the plot of his story to provide his opinion on each.

Claggart is in charge of discipline on the Bellipotent. Melville’s description of Claggart immediately sets him apart from the other sailors aboard the ship. His complexion is described as “a pallor tinged with a faint shade of amber akin to the hue of time-tinted marbles of old” which he goes on to say was “singularly contrasting with the red or deeply bronzed visages of the sailors” (Melville 20).

The master-at-arms is said to have an inherently evil nature, or as Melville puts it, “Claggart, in whom was the mania of an evil nature, not engendered by vicious training or corrupting books or licentious living, but born with him and innate, in short “a depravity according to nature” (30). Here, the author is openly revealing that Claggart’s malicious nature is “innate”; that he was born with it. However, even though this is presented by Melville as a fact, it still somehow leads the reader to question the nature of “evil” and how it comes to be. Herman Melville was a religious man, as evidenced in the novel from all of the biblical references he makes, as well as his apparent distaste for the rival ship, the Athée (The Atheist) which he says is “the aptest name ever given to a warship” (75). He compares Billy to Adam in chapter 2, “Billy in many respects was little more than a sort of upright barbarian, much such perhaps as Adam presumably might have been ere the urbane Serpant wriggled himself into his company” (10).

In the bible, there tends to be a clear line between good and evil, and Melville’s writing is definitely influenced by that mindset. For modern scholars who are studying his work, not everything can be taken at face value. It is important to consider the outer forces that effected Melville’s writing, as well as identify the message he is trying to convey through his work. By looking at this message, that some people are just born evil, we are able to come to our own conclusions about what evil is and how it comes into being, or if it even exists at all. Both the novel in question, and the bible are intended to be models of the real world. They strive to deliver wisdom about the way society operates and what life brings us. In this case, both works imply that evilness is not a choice, that it is part of fate. One is either born evil, or born good. The other side of this debate is that an individual’s environment shapes their disposition and natural inclinations, classifying them as good or bad. That maybe Claggart’s envy of Billy’s handsome looks and charm are more to blame, rather than a deep, unexplainable evil. Both theories are plausible, and although Melville does not delve into the second, he is actually forcing the reader to consider it by denying it. The second theme Melville addresses is fate versus free will, which ties closely with another topic—the advantages and disadvantages of innocence/goodness. Billy Budd is eventually tried and put to death for the murder of Claggart, who he punched in Captain Vere’s office out of sheer panic and confusion.

How does Billy, the epitome of goodness and purity, end up responsible for someone’s death? Early on in the novel, Melville says of Billy, “With little or no sharpness of faculty or any trace of the wisdom of the serpent, nor yet quite a dove, he possessed that kind and degree of intelligence going along with the unconventional rectitude of a sound human creature, one to whom not yet has been proffered the questionable apple of knowledge” (9). Again using the biblical reference to the creation story, Melville emphasizes Billy’s innocence. Billy is such a simple character, with the purest of intentions. He is devoid of selfishness and ill-will, yet he is still not spared from an early death. The idea Melville is supporting here is that innocence makes one vulnerable.

No matter how good an individual is, they are still not safe from death and misfortune. Melville is portraying an idea that is almost the opposite of karma, which is the belief that people who practice good works are rewarded, and those whose actions are evil or selfish are punished. Melville’s message in Billy Budd, Sailor is more synonymous with John Calvin’s idea of predestination, which Calvin himself describes as ” God’s eternal decree, by which He compacted with himself what he willed to become of each man. For all are not created in equal condition; rather, eternal life is foreordained for some, eternal damnation for others” (Inst. III, 21, 5). This concept of fate, that all events of life are predetermined by God or another heavenly force, is strongly supported by Melville’s novel. Billy Budd was sentenced to death even though he was a ‘model citizen’ and the picture of perfection. His goodness was not enough to save him from dying. He had no ability to control his fate. Billy’s death is much more than a simple execution. Melville’s microcosmic novel gives an air of importance to the death of the “handsome sailor” (2).

Billy becomes a martyr, a christ like figure who dies to save the other sailors from evil, i.e. Claggart. The author is again drawing biblical parallels in order to deliver a message through the hero of his story, and in this case, that message is one of sacrifice and salvation. Billy is executed, and it is written that he “ascended” and “took the full rose of the dawn” (71). His death is heavenly, it is like he is leaving the tangible world and returning home. He is so angelic that life on earth is not suitable, and he does not belong. This idea is addressed later on in chapter 26 when Mr. Purser, one of the officers aboard the Bellipotent, wonders aloud to the surgeon whether Billy Budd’s death was truly deserved, or if it was a case of “euthanasia” (72).

Melville wanted to express that true goodness and purity cannot survive among the evil of the world. Even so, Billy’s death is not without reward. Because of Billy, the ship is rid of an evil presence. Good triumphed over evil, and then ascended into heaven, much like the story of Jesus Christ, who died for the sins of the world, and then rose to a place more suitable for his pure heart (Mark 16:19). The last two-sided theme that Melville tackles in Billy Budd, Sailor is the human struggle between conscience and law. The harsh approach that Captain Vere takes while judging Billy’s trial is that actions are punishable, not individuals. Vere decides Billy’s fate based solely on the consequences of the incident, Claggart’s death. He knows that Billy had no intent to harm the master-at-arms, or even any ill-will in general, yet he believes that to preserve order on the ship, Billy must be sentenced to death.

Vere recognizes that Billy is innocent, and is shocked at first when Billy’s blow kills Claggart. He exclaims, “Struck dead by an angel of God! Yet the angel must hang!” (51). In this case, strict order and black-and-white law defeats and moral reasoning or trial of character. In a world so full of chaos and disorder, it is easier and more important to uphold clear lines of what is right and what is wrong, rather than consider things based on the circumstance and other influential factors. Some people argue that there are no bad people, just bad actions. In Vere’s mind, these two must be the same thing to guarantee order on his ship. He is a man who is wary of mutiny (which Melville explains extensively in chapter 3) and therefore he is quick to squash any dangerous behavior. This is a complex debate that humans have struggled with throughout history. Should punishment be decided based on intent, or on the consequences of an action? Vere’s verdict may have seemed unfair, but Billy accepted his fate and faced death head on with no qualms.

In this case, the stricter method of judgment prevailed, and Billy was released from the mortal world. Melville created a book that uses the social structure on an 18th century ship to reflect some of the most interesting moral conflicts known to man. His microcosmic plot addresses the nature of evil, the concept of fate, and the struggle of how to enforce law. Melville touches on each of these topics throughout the story, and is able to provoke thought and dispute in his readers. These topics are universal, and not only applicable to the characters and events in the book. They are reflections of moral dilemmas that one commonly faces in the world today. He presents the situation, provides biblical references and philosophical insight, and then advances the plot accordingly. It is evident that Melville wrote Billy Budd as a model of the real world, to deliver his messages cleverly and in an accessible fashion.

An Analysis of the Main Themes in the Book Billy Budd Sailor by Herman Melville. (2021, Sep 27). Retrieved from https://studymoose.com/an-analysis-of-the-main-themes-in-the-book-billy-budd-sailor-by-herman-melville-essay 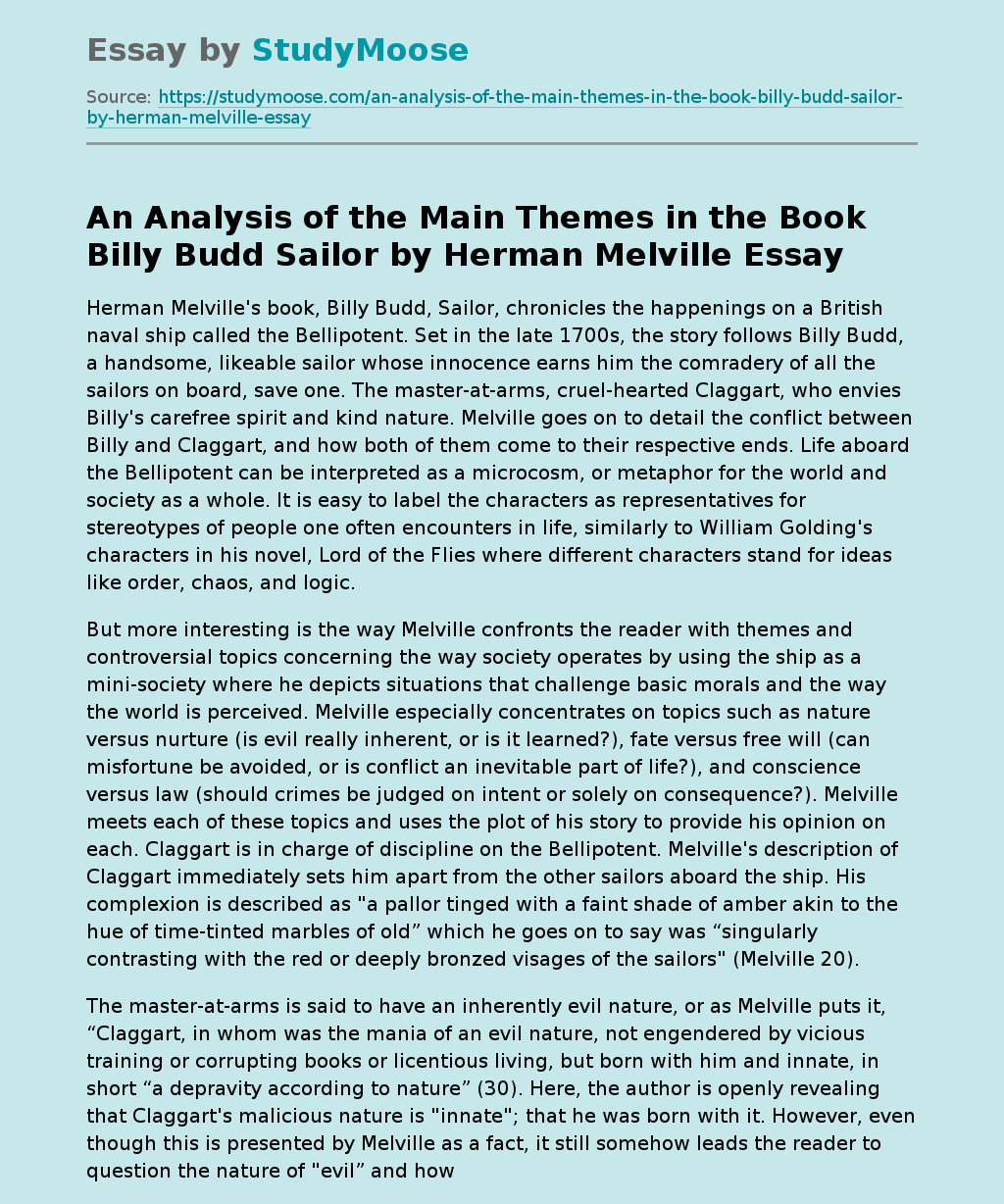