Monomania, as defined by the American Heritage Dictionary, is the pathological obsession with one subject or idea. In Herman Melville’s novel Moby Dick, an obsession causes monomania in its main character. Through his actions, words, thoughts, and what others think about him, Captain Ahab is truly monomaniacal.

Ahab is monomaniacal through his words and thoughts. “Talk not to me of blasphemy,man; I’d strike the sun if it insulted me.” This shows Ahab’s madness because only he would have the nerve to say that no matter who it is, great or small, he would stand up to them; this includes Moby Dick.

Don't use plagiarized sources. Get your custom essay on
“ Captain Ahab portrayed as monomaniacal in Moby Dick ”
Get custom paper
NEW! smart matching with writer

Ahab often smokes a pipe, but he realizes something and says “What business have I with this pipe? This thing that is meant for sereneness, to send up mild white vapors among mild white hairs, not among torn iron-grey locks like mine. I’ll smoke no more.” He admits that he is not a peaceful man, which is quite monomaniacal.

Another event that shows Ahab’s monomania is when he talks directly to a dead whale’s head, saying “

Speak, thou vast and venerable head, mighty head and tell us the secret thing that is in thee…O head! thou hast seen enough to split the planets and make an infidel of Abraham, and not one syllable is thine!” His obsession leads him to even say that he will pay someone to kill Moby Dick just for the sake of revenge. “Whosoever of ye raises me that same white whale, he shall have this gold ounce, my boys!” When Ahab finally meets Moby Dick, his monomania hits its high point as his last words before his death are “Sink all coffins and hearses to one common pool! And since neither can be mine, let me then tow to pieces, while still chasing thee, though tied to thee, thou damned whale! Thus, I give up the spear!”

In one incident, Ahab holds Starbuck at gunpoint just because he asked if he could have a crew of men fix a leak. Is that not an action of a madman? Ahab also breaks the ship’s compass at one point in the story so that the crew learns how the ship moves. He also refuses to recognize the warnings that are presented during gams; he dismisses them without any thought or hesitation because his obsession makes him blind to the reality and stupidity of the search for Moby Dick. Ahab also has no respect for his fellow sailors, as he has manipulated them quite often. Everyone on the Pequod, especially Ishmael, thought that they were going on a normal whaling voyage, not a suicidal chase for a deadly white whale.

If someone is to be called monomaniacal, not only one point of view can confirm that. The thoughts of fellows crew members on the Pequod often comment on how they feel about Ahab. Ishmael describes Ahab as being “A grand, ungodly, god-like man, Captain Ahab; doesn’t speak much;Ahab’s been in colleges, as well as among the cannibals; been used to deeper wonders than the waves; fixed his fiery lance in mightier, stranger foes than whales.” Queeqeug gives his two cents worth when he says “

More than once did he put forth the faint blossom of a look, which, in any other man, would have soon flowered out in a smile.” Obviously, Ahab did not like to smile, which is something that happy people do. Finally, Stubb comments that “The sea had jeeringly kept his finite body up, but drowned the infinite of his soul.” He says that Ahab has wasted his soul in pursuit of Moby Dick, and that if it was not for the sea and the white whale, Ahab would not be monomaniacal.

Ahab is monomaniacal through what he says, what he does, and what other think of him. He not only manipulates his fellow sailors, he also acts like a madman because of his obsession with the pursuit of Moby Dick. Captain Ahab is seemingly monomaniacal despite what he thinks of himself. 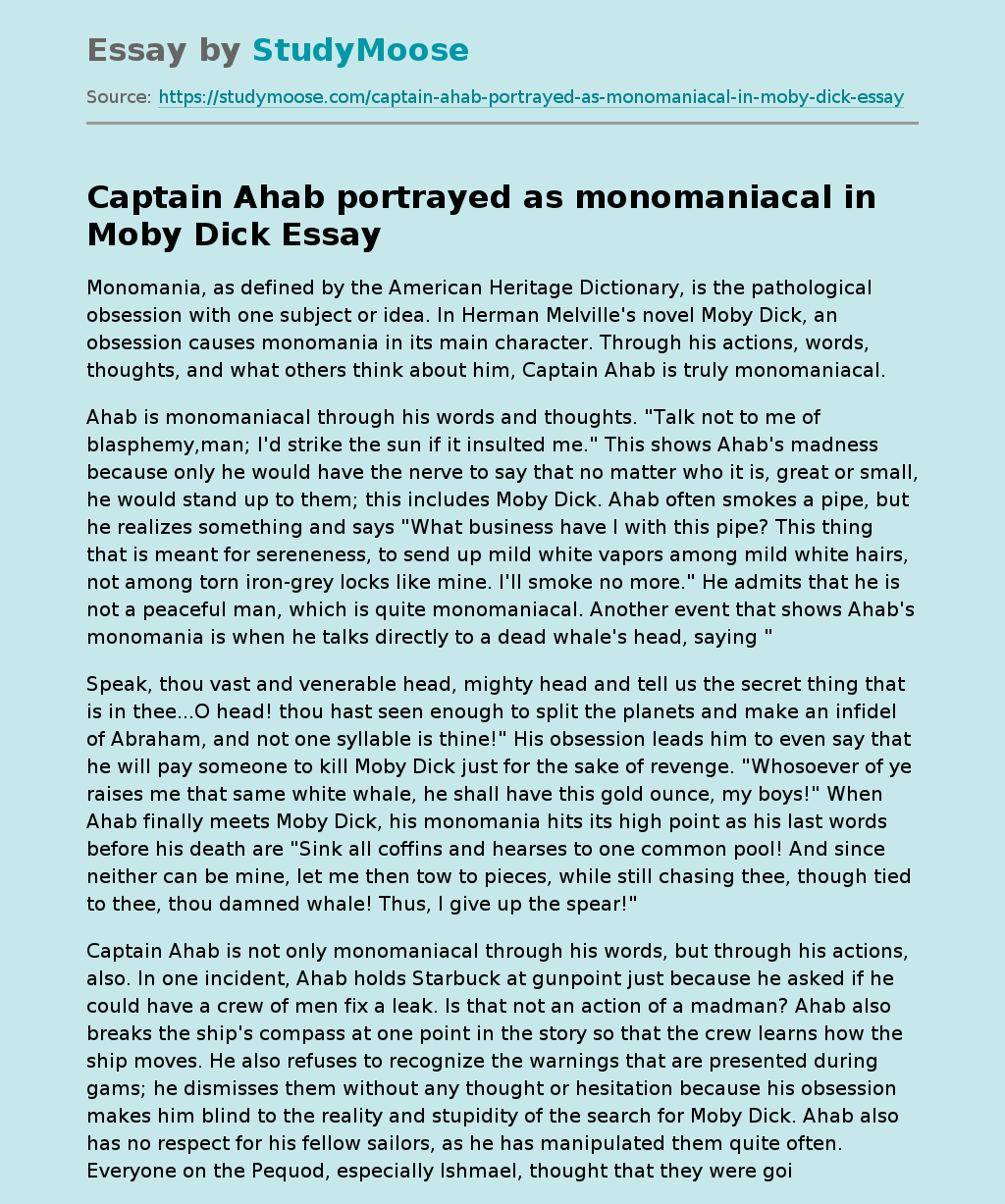