There are numerous characters in Moby Dick, but only a few of them have any impact on the story. A common sailor named Ishmael is the narrator. The book, however, focuses on Captain Ahab, the one-legged commander of the whaling ship Pequod. Ahab has sworn to kill the gigantic whale Moby Dick, who took away his leg. Starbuck is the first mate of the Pequod. Queequeg, Tashtego, and Daggoo are the three harpooners.

The story begins with Ishmael becoming restless. He decides to go out to sea on a whaling ship. In the port of New Bedford, he meets and shares a room with a harpooner named Queequeg. The two of them become close friends, and agree to ship out together. The day after they reach Nantucket, Ishmael begins searching for a whaling ship preparing to leave harbor. Out of three ships ready to leave, he chooses the Pequod.

The owners of the ship, Captains Peleg and Bildad are excited to hear of Queequeg from Ishmael and gladly let him join the crew. They are told the captain of the ship is named Ahab. Peleg and Bildad say that he is a good man, but because of some strange illness, he is confined to his cabin. On Christmas day, and with Ahab still in his cabin, the Pequod sets sail in the Atlantic. As the weather begins to warm up (several months after leaving port), Ahab is finally seen on deck.

The strangest thing about Ahab is his leg. Instead of flesh and bone, he has a white ivory peg leg. As the weeks wear on, Ahab starts to become friendlier.

One day, he calls the crew before him. He tells them that the sole mission of the Pequod is to kill Moby Dick. Moby Dick is a gigantic sperm whale with a crooked jaw and a deformed forehead. He has never been defeated, and has attacked and sunk entire ships. Ahab admits he hates Moby Dick for taking his leg away, and wants revenge. The crew agree to this challenge, and swear to hunt him down. The only who is not excited about hunting down Moby Dick is first-mate Starbuck. For many months, the Pequod sails South, through the Atlantic, around the Cape of Good Hope (the southern tip of Africa), and into the Indian Ocean. Along the way, they kill and drain the spermaceti oil from every sperm whale they encounter. Each time they meet another ship, Ahab begins the conversation with “Hast seen the White Whale?”. Finally, after entering the Japanese sea, the Pequod encounters a whaling ship named the Enderby.

The Enderby’s captain had just recently lost his arm to Moby Dick. Ahab becomes so excited at the news that he breaks his ivory leg. The ship’s carpenter builds him a new one. Once reaching the waters around the equator, the Pequod meets another whaling ship, the Rachel. They had seen Moby Dick, and had become separated from one of the whaling boats during the battle. Ahab refuses to help them look for the missing men. At last, Moby Dick is spotted by Ahab. In the first day of fighting, the whale is harpooned many times, but escapes after smashing Ahab’s boat. On the second day, the whale is harpooned again, but still escapes. On the third day, Ahab’s harpoon pierces the whale, but the rope catches him by the neck and Moby Dick drags him to the bottom of the sea. An angry Moby Dick rams and sinks the Pequod. Only Ishmael survives, and he is rescued by the Rachel. My Response Moby Dick was not the novel I expected. I was under the impression that it would be about seafaring and the whale Moby Dick. Instead, Moby Dick is a story about Captain Ahab’s obsession. There is very little in the story about the revenge itself, just about Ahab’s monomania.

Out of 465 pages, only forty-two of them deal with the actual battle between Ahab and Moby Dick. The novel places very little emphasis on actual seafaring. Ishmael never even steps on a boat until page seventy-four. Even when the ship finally leaves port, the mention of anything involving sailing or the life of sailors is kept to an absolute minimum. There is, however, plenty of emphasis is on whaling, the anatomy of whales, and their behavior. The book goes into great detail describing the whalers of Nantucket, and gives in-depth explanations of the different types of whales, quoting several outside sources in the process. The narrator mentions the awesome size of the sperm whale, and how few books even try to describe it. He also shows great respect for people who go whaling, and describes the camaraderie that forms between them. This is an annoying inconsistency in the novel, since Ishmael (the narrator) tells the reader that he has never been on a whaling ship before, and has never seen a live whale.

The first twenty-three chapters focus on Ishmael’s thoughts and actions. He introduces the reader to whaling and describes the Pequod. After the ship sets sail, he seems to vanish from the story. At certain intervals, however, he plays minor roles, and it is Ishmael that survives to tell the story. From chapter twenty-four onward, the novel is almost completely about Ahab hunting for Moby Dick. He has the blacksmith construct a special harpoon, made from the finest iron, and soaked in the blood of the three harpooners. The forging of the harpoon is somewhat ironic, since the rope attached to that same harpoon is what drags Ahab to the bottom of the sea. Despite Ahab’s apparent madness, he still seemed able to reason clearly. He carefully and methodically located the region of the sea that Moby Dick is most likely to be in (an almost impossible task, considering the size of the Earth’s Oceans). When he first set sail, Ahab’s original plan was to hunt only Moby Dick and ignore other whales.

Once he realizes that his men will abandon him if they do not make some sort of a profit while at sea, he encourages them to hunt other whales and boosts the morale of the crew. Ahab is definitely the hero of Moby Dick, but he is a tragic hero. Everyone in the novel who knew Ahab prior to losing his leg considered him to be a great man, and one of the finest captains ever. After the loss of his leg during the first battle with Moby Dick, Ahab’s tragic flaw appeared. He was obsessed. He wanted revenge, and nothing else. Ahab considered Moby Dick to be the embodiment of all that is evil. This monomania is what sent the Pequod halfway around the world to the Pacific Ocean, where Ahab (and almost everyone else on the Pequod) died. Ahab becomes focused on his one view of the whale. Ahab’s preceives the whale as the embodiment of evil. The whale’s white color lends an ambiguity to the image of the whale as evil. The great White Whale, Moby Dick, symbolizes many different things.

The first thing it represents is Ahab’s anger. The whale’s body is deformed, as is Ahab’s. The whale is driven by animalistic rage, mirroring the anger in Ahab. Ahab thinks Moby Dick is a monster, but it is really Ahab who has become the monster. The whale serves as a scapegoat for Ahab’s miserable existence. Another thing Moby Dick can represent an unreachable goal. He is a legendary whale, and the object of a wild and exciting chase through three oceans. And, despite the efforts of the Pequod, they never defeated him. The whale was a goal that no one could achieve, but people still destroyed themselves trying. One odd thing about the novel is that despite all the pain, death and destruction Moby Dick has caused, I do not consider the whale to be evil or monstrous. In fact, I was almost happy to see the whale turn on his hunters and destroy them. I cannot fully appreciate all the feeling about whales that the novel attempts to create. When Moby Dick was written, whales were thought of as dumb brutes. They were found in large enough numbers that people hunted them endlessly, and never worried about killing them all. Whaling was an admired profession.

People needed whale oil for their lamps. Spermaceti oil was used to make perfume and other cosmetics. In today’s society, things are radically different. Whales are thought to be just as intelligent if not more intelligent than humans. Some scientists believe they have a complex language, something not mentioned in the book at all. Whales are an endangered species, almost hunted to extinction. In fact, many countries have outlawed whaling. Most people consider whaling to be cruel and inhumane. The Japanese are despised worldwide for continuing to hunt them. Television programs portray them in a positive light. Whale are mammals that nurse their young and breathe air, just like human beings. They are not giant fish.

Today’s children are taught to respect whales, and are taken to aquariums to be educated about them. After the invention of the electric light bulb, whale oil lamps were no longer used. Modern cosmetic products contain no spermaceti oil. Their manufacturers proudly make claims that no animals were harmed while making the cosmetics. The real “dumb brutes” in the novel are not the whales, but the whalers. They are uneducated about the true nature of their prey. In a sense, Moby Dick was simply exacting revenge for the centuries of pain and death mankind has inflicted on whales. In the time of Herman Mellville, man’s dominance over nature was idealized. Today, we are taught to respect and preserve our environment. This different frame of reference makes it very difficult to appreciate the symbolism in this novel. The main focus of the novel, however, is on obsession and its destructiveness. One of the most important elements in a great literary work is universality. The main idea of the novel (destructive obsession) is universal, even though the symbolism is not. Moby Dick was clearly a great novel, although it was nothing like what I expected. 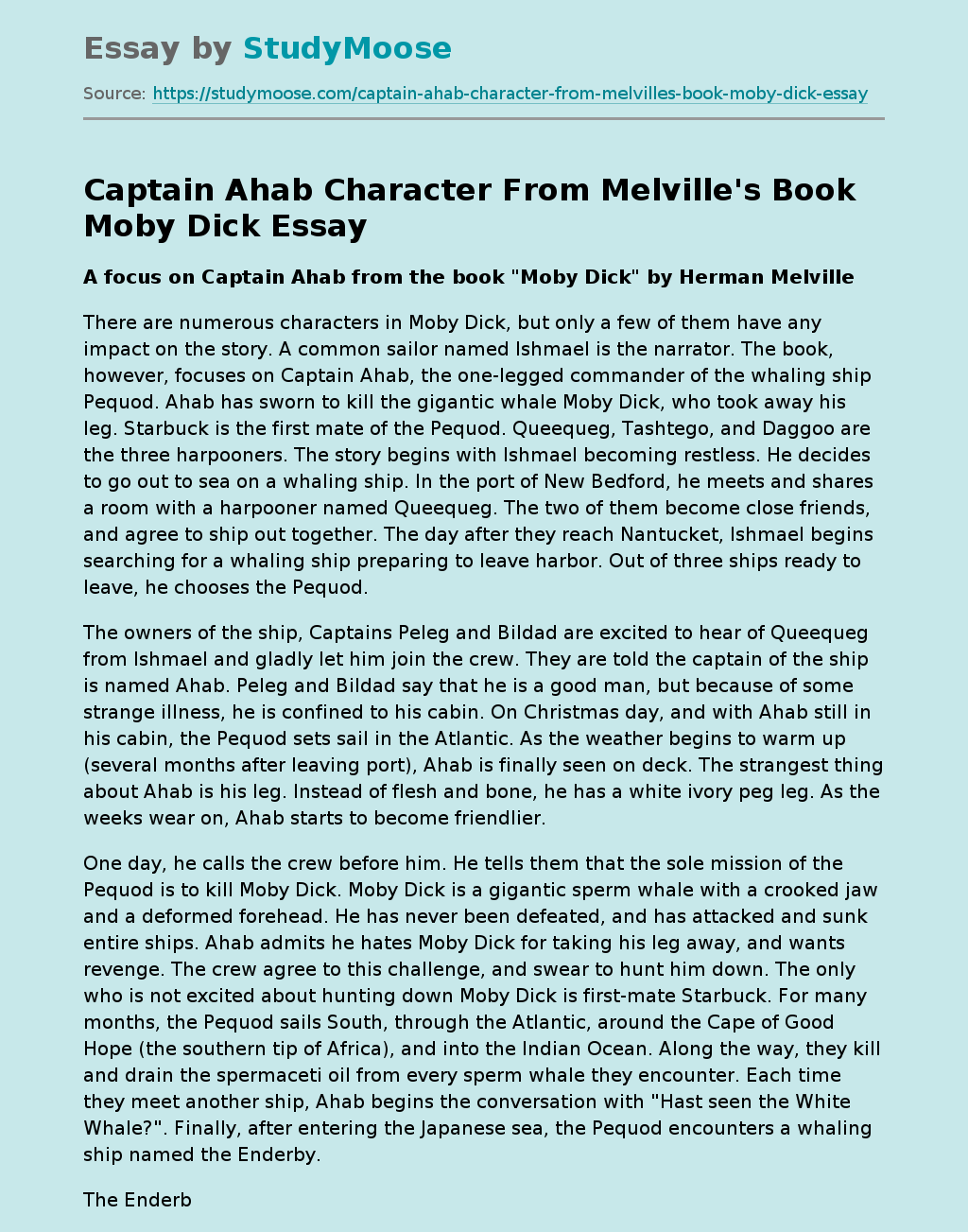