Moby Dick is a novel filled with many biblical allusions, and I feel strongly that there are certain characters in the book that portray biblical characters or express the same situations in the Bible. In the beginning of the book, Father Mapple gives a sermon to the sailors about Jonah and the whale. This story in itself has much symbolism and starts the book off with the notion that God and the Bible are very much a part of the story.

Don't use plagiarized sources. Get your custom essay on
“ Biblical Aspect of Moby Dick Novel ”
Get custom paper
NEW! smart matching with writer

In specific there are a few main characters that support the fact that they are symbolic to the Bible.

First, Ishmael is the main character in the story and is the narrator through most of the book. He is very different from all of the sailors on the ship. He has class, intelligence, and he knows nothing about whaling or the sea. In the book of Genesis, Ishmael was an outcast “with everyone’s hand against him,” and in the book you see how he is different from the sailors because of his small knowledge of whaling.

To further examine Ishmael’s situation, he says he escapes to the sea to leave the depressions that have ridden his life. Another part of Genesis tells us that Ishmael wasn’t Abraham’s true son because he was born through one of Abraham’s maids (supposedly Sarai, his wife, was infertile) and ever since Isaac was born, Ishmael was shunned. Like in Moby Dick, Ishmael was looked down upon from the beginning because he didn’t have the history that other people on the boat had as sailors.

Ishmael is always different from everyone, and he looks at everything in an interrogative way, so he thinks of Moby Dick as a holy mysterious creature while Capt. Ahab thinks Moby Dick is pure evil.

Moby Dick is the most complicated, undefined character in the book. But to attempt to understand this enigma, let’s look at what we know about him. Moby Dick is a white, massive sperm whale, the largest and most feared by all beings in the sea. To Ahab, Moby Dick is the highest of all evil. To Starbuck, the chase after the whale is a fruitless cause. To Ishmael, the whale defines mystery, unexplainable, and holiness. Moby Dick’s whiteness can be linked with holiness and godliness, such as Revelation 1:14, ” His head and his hairs were white like wool, as white as snow; and his eyes were as a flame of fire;” Much of revelation involves the color white, which has been historically a holy color and a color of prosperity as described in Ishmaels in-depth description of the indescribable whiteness that he saw when he caught sight of Moby Dick. Another excerpt of Revelation shows the importance of white in the Bible, Revelation 4:4) “And round about the throne were four and twenty seats: and upon the seats I saw four and twenty elders sitting , clothed in white raiment; and they had on their heads crowns of gold.”

Ishmael tries to describe whiteness as, “which at times by its intensity completely overpowered all the rest; and yet so mystical and well nigh ineffable was it, that I almost despair of putting it in a comprehensible form. It was the whiteness of the whale that above all things appalled me. But how can I hope to explain myself here; and yet, in some dim, random way, explain myself I must, else all these chapters might be naught.” So it seems as if the whiteness was the same indescribable thing as is the whiteness John saw in his Revelation, which he wrote for the Bible. We know Moby Dick is indestructible and like God, nobody can touch him. So can we conclude Moby Dick represents God? I think that is one of the mysteries that Melville leaves the reader to unfold on their own. He is symbolically the great divine mystery.

Captain Ahab could be taken in different ways, such as good or evil. In this case he would be evil considering he has the same name as King Ahab in the Bible. Ahab is like no other character in the book. At times, he lacks compassion or even certain aspects of a complete personality, but maybe the determination of his goals (revenge on Moby Dick) compensates for his lack of personality. Captian Ahab isn’t just after the bulbber and oil of the whale, but he is after the glory and the sense that he can conquer everything. The thing that keeps his engine running after Moby Dick is the fact that there is something greater than him, the “Great” Captain Ahab. Some refer this egotistical ness as hubris, something Greek tragedy (from the packet) Gods have, and that hubris is sometimes the reason for their downfall. Captain Ahab has so much confidence in going after Moby Dick that at one point he says “If man will strike…talk not of blasphemy man; I’d strike back at the sun if it insulted me…” So not only is he determined, the only thing that makes him complete is the fulfillment of striking hate and death upon this whale.

To compare to the Bible, Captain Ahab is similar to the King Ahab of 1 Kings. The Bible says in 1 Kings 16:33, ” and Ahab did more to provoke the Lord than all Kings of Israel before him.” Throughout the book Ahab does only what will further his pursuit of the whale and in doing that, he at times disobeys the rules of religion, business, of common sense, and ignoring the omens, pleas against his cause, and experience (Moby Dick Packet). For example, one part of the book describes a part where two ships meet to dock for a short time and once Ahab heard news of Moby Dick’s location, he immediately abandoned all plans of sailors interacting with the other boat and women, not even taking a second to breathe, because he was narrow minded with the white whale in vision.

Like King Ahab has Elijah, Captain Ahab has Fedallah as prophets to warn the two leaders of troubles ahead. Elijah proclaims disaster for King Ahab’s misdoings on him and his family. Fedallah came to Ahab, prophesizing the downfall of Ahab and his ship. This shows Melville’s concordance of the Bible with his storytelling. As you can see, Ahab was punished in both the bible and Moby Dick. In The bible it says,(1 Kings 17:1) ” And Elijah the Tishbite, who was of the inhabitants of Gilead, said unto Ahab, As the LORD God of Israel liveth, before whom I stand, there shall not be dew nor rain these years, but according to my word…”

In conclusion, I believe Melville definitely used symbolism to spice up his story and also biblical allusions to give more sense to build the climax of the story. I feel I have proven to you that these three characters, Moby Dick, Ishmael, and Captain Ahab were all linked to characters in the bible. Depending on how deeply you look into the story, you can find that symbolism lies everywhere in this book and that is why it is the “smartest” book for a high-school student to read. 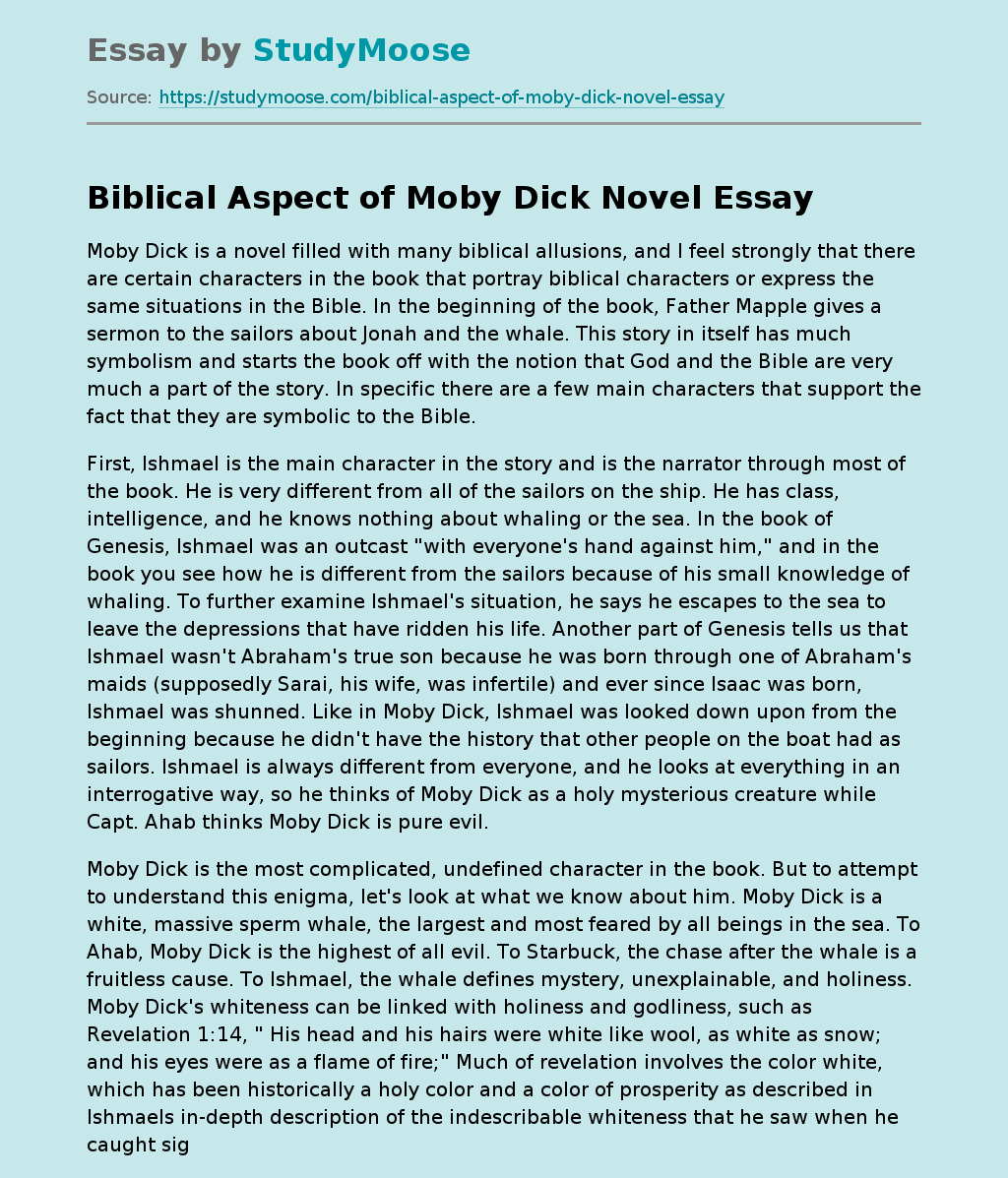