Imagery Sinners in the Hands of an Angry God

When our view turns to North America in the first half of the 18th century, the brightest phenomenon is the “Calvinistic Great Awakening,” which began with the sermon of Theodor Frelinghuysen in the Dutch Reformed communities of New Jersey in 1726. One of the greatest representatives of that time was Jonathan Edwards.  Due to Jonathan Edwards’ sermon “Sinners in the hands of angry God”  he can truly be called as “one of the greatest theologians and pastors of America, who stood at the origins of the Great Awakening.

Don't use plagiarized sources.
Get Your Custom Essay on Imagery Sinners in the Hands of an Angry God Just from $13,9/Page

Jonathan Edwards’ sermon “Sinners in the hands of an angry God” is the most famous sermon in the history of America. The sermon was read in Enfield, Connecticut, July 8, 1741, at the peak of the First Great Awakening. This is a typical Puritan “awakening sermon,” which warns of a court that hangs over unbelieving people.

It also tells about the mercy of God, who keeps his enemies from instantly overthrowing Hell. One of the most important moments for Edwards was that every person should feel his sermon, that’s why he carefully selected the words to make his listeners take the topic exactly as reality. To achieve this goal, he used bright images in his explanations together with the biblical teaching. As a result of this sermon, the listeners experienced a dramatic revival. There are many meaningful quotations from the sermon, but we want to concentrate your attention on the one, that is being discussed enough.

” Their foot will slip in their time… when their foot is shaken” (Deuteronomy 32:35).

In this verse there is a threat to God of the wicked, unbelieving Israelites who were the chosen people of God and lived under His mercy; but who, despite His tremendous work on them, resembled stiff, reckless people (Deut. 32:28). After all that was done for them, they brought a bitter and poisonous fruit, as you see in 32 and 33 verses of the same chapter. The citation “their foot will slip in their time” seems to imply something very close to the punishment and death of sinful Israelites, who were left by God to their fate.

Another truth that is laid down in this verse says that they are in danger of falling, as well as those who stand or walk on the ice. They do not need any interference; their weight will knock them down.

The reason why they haven’t fallen yet is only one – the time appointed by God has not come. Therefore, it is said that when it comes – “their foot will slip.” God will no longer support them in a slippery place; He will leave them alone. And then they will instantly perish, because they are similar to people on the edge of a slippery sloping plane, which, as soon as they are released, will fall and break.

Image of hell in the sermon.

Jonathan Edwards was a consistent opponent of Arminianism and perceived freedom of the action from the position of compatibilism. He first gave the clearest definition of “free will,” that human freedom is not an opportunity to do what a person decides to do, but rather what he wants.

He also pays a lot of attention to the explanation and meaning of hell. God keeps all unconverted in His hands over the hellish abyss. Everyone by nature deserves this hell; God is angry with sinners, and unless they believe in Christ, they can’t feel secure. They have nothing to grasp. Edwards’ vivid descriptions of hell and eternal torment are examples of the emotional appeal pathos. For example, Edwards’ states, “The devil is waiting for them; hell is gaping for them, the flames gather and flash about them, and would fain lay hold on them, and swallow them up…”. In this example the audience can imagine the horrors of hell, which encourages them to look to God for salvation, thus also making use of logos as the audience rationalizes and considers the situation.

God has enough strength to drop sinners into hell at any moment. When He rebels, people become helpless; and even the strongest of them can’t resist Him, and no one can deliver them from His hand. For Him there is no difficulty in instantly plunging corrupt people into hell, He can do this very, very easily.

Sovereignty of God, original sin, and salvation in the sermon.

Jonathan Edwards describes hell to make the sinners aware of what is waiting for them in the nearest future. Also, he is disturbed by the next questions:

That theme can be important to everyone. Edwards tries to convey that in the souls of sinners reign the infernal principles which, without God’s limitations, could have already inflamed in them, flaring up with infernal fire. Edwards’ sermon and especially his later writings reflect this diagnosis of the fallen human condition. In the “Sinners in the Hands of an Angry God,” Edwards tries to show all the horror of the lives of sinners after death. He explains that the only one salvation is a faith in God. It’s never too late to change; God will always listen to you.

Imagery Sinners in the Hands of an Angry God. (2016, Mar 20). Retrieved from https://studymoose.com/imagery-sinners-in-the-hands-of-an-angry-god-essay 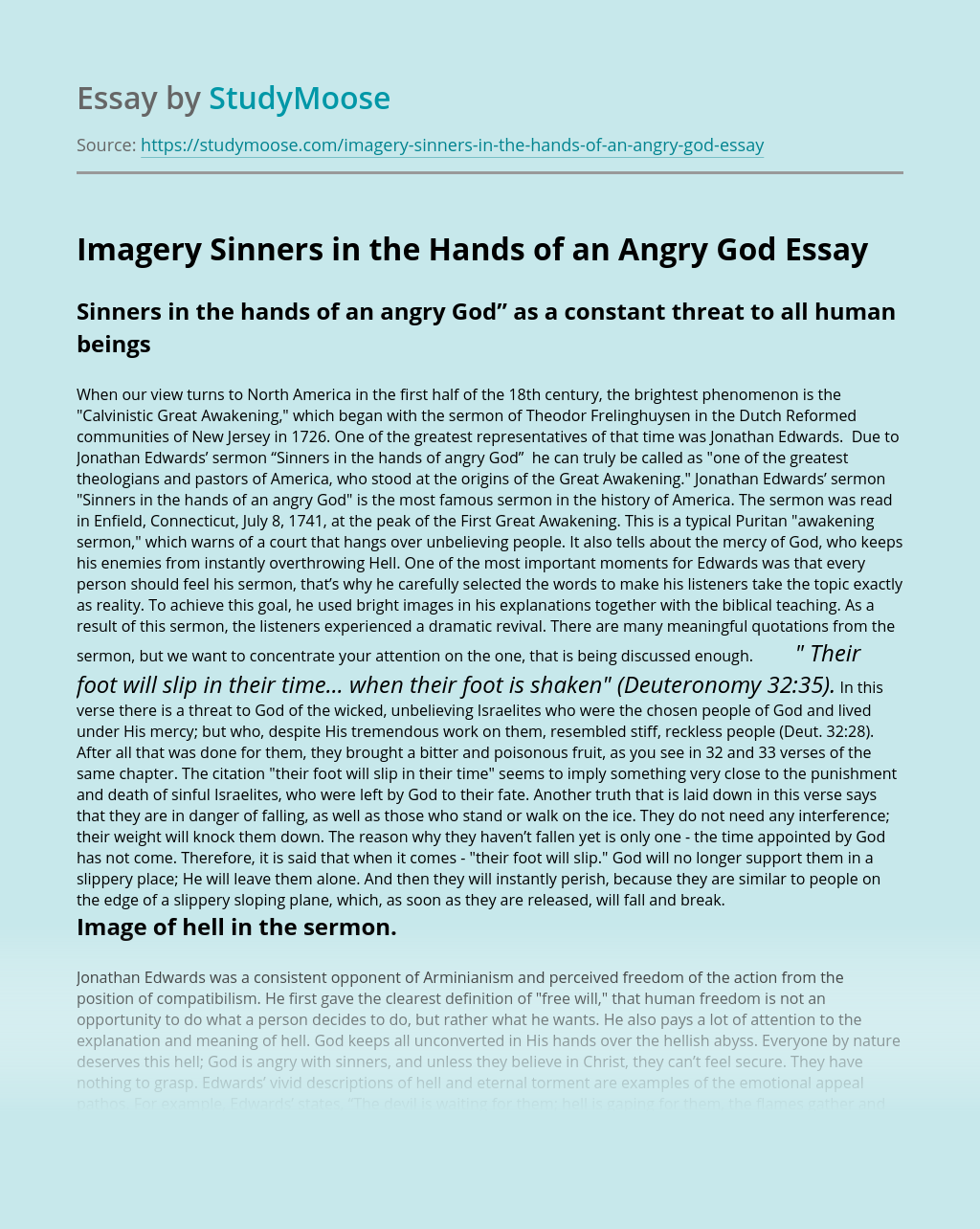 Literary Devices in Sinners in the Hands of an Angry God

Rate this post In Hell we imagine it to be torturous, horrid, and filled with pain and suffering. In the story, Sinners in the Hands of an Angry God, it thoroughly explains what Hell would be like. Literary devices are used to emphasize how horrific Hell would be for sinners, and it scares you into...

Rate this post For this paper, I interviewed the pastor of Grace Life Baptist Church in Ruby Michigan, USA. Would you say that your congregation (or the people within your particular department or area of ministry) is “Living Out the Mind of Christ” (i.e. Unity, Humility, Selflessness) as they interact, serve, and minister to/with each...

Get Essay
Why does religion exist?

Rate this post Arthur C Clarke once said “It may be that our role on this planet is not to worship God, but to create him.” This quote seems to summarize the many aspects of religion in that all the aspects seem to point to one fact: Man created “God”. Many of the considerations can...

Rate this post The greatest modern name that come into mind when one speaks of faith and God is Professor Bruce W. Longenecker. The name stands tall, undefeated and unquestioned in the golden pages of western Christianity, reflecting the hearts and minds of people of their times and the times to follow. He has devoted...

What Does the Bible Say About Tattoos and Body Piercings?

Rate this post Answer: The Old Testament law commanded the Israelite, “Do not cut your bodies for the dead or put tattoo marks on yourselves. I am the LORD” (Leviticus 19:28). So, even though believers today are not under the Old Testament law (Romans 10:4; Galatians 3:23-25; Ephesians 2:15), the fact that there was a...

Rate this post The religion that I was raised is Baptist. I have heard that southern Baptists are very strict but I did not ever have to do anything strict. My parents took me to church when I was younger but after about the age of 10 I rarely went again. They got divorced and...

The Influence Of Religion On Political Participation Politics

Interpreting a Passage from James

Rate this post The passage to analyze in the Book of James is James 1:12-17, which speaks about being tempted and why it is important to overcome trials and temptations. This passage encourages all believers on the importance of enduring temptations, as they will get a reward in heaven (James 1: 12). This shows that...