Jonathan Edwards’s “Sinners in the Hands of an Angry God” was intended to frighten people into believing that they were doomed for hell unless they expressed remorse for their sins, which would ultimately save them from hell. Edwards does this by using rhetorical strategies such as climax, repetition, and figurative language. At the time of when this piece was written, the use of repetition helps emphasize Edwards’s purpose of scaring his congregation into a confession of sins. An example of this repetition is “if your strength were ten thousand times greater than it is, yea, ten thousand times greater than the strength of the stoutest, sturdiest devil in hell, it would be nothing to withstand or endure it.

Don't use plagiarized sources. Get your custom essay on
“ Rhetorical Analysis of Jonathan Edwards’s “Sinners in the Hands of an Angry God” ”
Get custom paper
NEW! smart matching with writer

” The repetition of the phrase “ten thousand times greater than” is significant as it shows Edwards’s very strong feelings that strength cannot save someone from hell. This also supports his claim that God is very, very powerful and your fate is up to him.

Unless you confess your sins, you will face eternal damnation. Another example of this is when Edwards writes, “peace and safety: now they see that those things on which they depended for peace and safety, were nothing but thin air and empty shadows.” By repeating “peace and safety”, readers or spectators of the sermon being delivered might possibly begin to mistrust their ways of feeling confident of their place in the afterlife. Actions such as praying, which would have made someone feel good that they would go to Heaven apparently do not have an impact on your fate, according to Edwards.

Perhaps the most beneficial quote to his argument is his use of the phrase “no other reason”, which is repeated towards the end of the excerpt. It supports his argument by showing that there is nothing humans have done to spare them from hell. Essentially, they are damned to hell from the moment they begin to exist, unless they repent their sins.

Edwards also uses quite a bit of climax in his writing. Many of his long, drastic sentences escalate into a very frightening tone as they go on. An example is the first sentence of the excerpt. Edwards uses phrases like “more and more”, “rise higher and higher” and “the more rapid and mighty”. These phrases show how serious Edwards is about implanting this fear of the wrath of God into his audience. At the same time, Edwards compares the wrath of God to water, because water is vital and beneficial to human life but at the same time, it can do mass destruction in a very short amount of time. Another example is the last paragraph of the excerpt. Edwards builds up the tension by starting off with asking the reader to consider the danger they are in by not confessing sins. He then builds up the tension by talking more and more about fire and hanging over a pit of wrath. This is meant to truly scare the reader. He uses phrases like “You hang by a slender thread” to show that you can randomly and suddenly be dropped into hell if you don’t change your practices.

Another main rhetorical device Edwards uses is figurative language. Throughout the excerpt, there are countless examples of figurative language. An example is when Edwards writes, “The bow of God’s wrath is bent, and the arrow made ready of the string, and justice…drunk with your blood.” This example of personification gives human characteristics to God’s “bow”, which is basically him deciding whether or not to “drop” someone into hell. This can also scare readers into thinking of God as a person who has feelings and actual thoughts. Towards the end of the sermon, Edwards uses very detailed imagery to invoke fear into his congregation.

By describing hell as a pit of fire and wrath, people would truly be scared by that. Through his detailed imagery, listeners and readers can easily imagine this pit he is speaking about. When imagining it, it does not seem like somewhere someone would want to go. So, this would get reactions out of the intended audience.

Edwards effectively uses repetition, climax, and figurative language to invoke fear into his audience. Although his extreme sermons are what eventually got his title as a pastor revoked, they were effective on his audience.

Rhetorical Analysis of Jonathan Edwards's "Sinners in the Hands of an Angry God". (2021, Nov 06). Retrieved from https://studymoose.com/rhetorical-analysis-of-jonathan-edwardss-sinners-in-the-hands-of-an-angry-god-essay 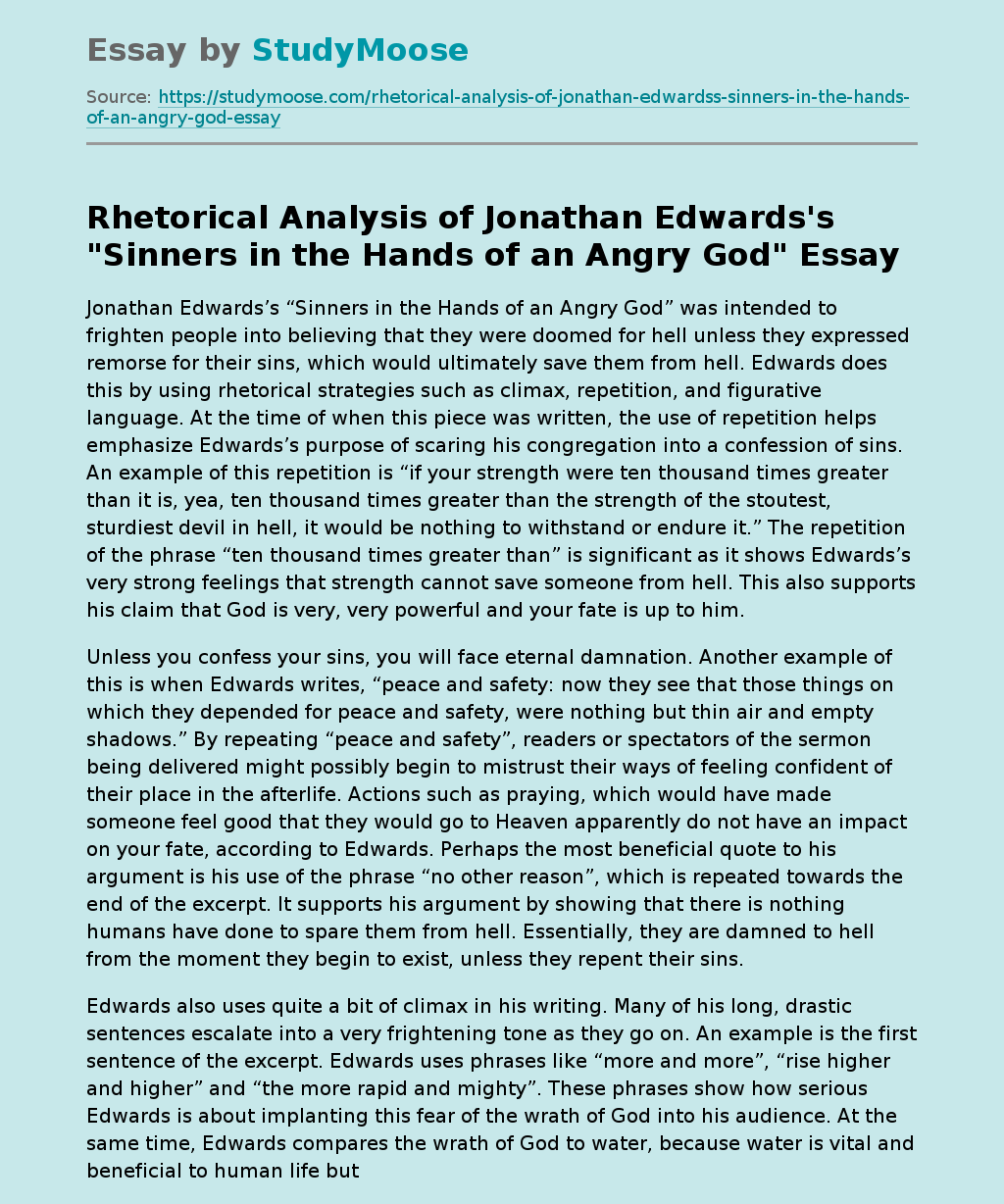