Sinners in the Hands of an Angry God Rhetorical Analysis

In the sermon, “Sinners in the Hands of an Angry God,” Jonathan Edwards, with a contemptuous attitude, attempts to provoke a religious revival in the Puritan communities of colonial America using the very powerful motivator of fear. He instills, very literally, the fear of God within the hearts of unconverted people within the church. Edwards renders his audience emotionally unstable with the terrifying body of his sermon, it allows his conclusion of salvation to be the solution of the entire unconverted congregation.

Don't use plagiarized sources.
Get Your Custom Essay on Sinners in the Hands of an Angry God Rhetorical Analysis Just from $13,9/Page

Early on in the sermon, Edwards reveals his target audience, all unconverted men, but never directly refers to them, using words like, “they” and “them”. Those unconverted people would know that Edwards was referring to them, but they maybe wouldn’t feel like the guilty party in the situation. After building up to the climax of a threat against those who have not been converted, suddenly Edwards changes the “they” and “them” for the words “you” and “your” He is now directly targeting his audience, exposing them to a direct blame, throwing them up in the air, making sure that they feel guilty for living another day.

After breaking his audience, throwing them into emotionally by destroying all hope of escaping eternal damnation, then opens an escape hatch, allowing the emotional distorted people to walk directly into what he wanted. Through out the sermon, while Edwards is delivering a description of hell, pain, suffering, anything that is unpleasant and frightening, it’s done in all one sentence. The sentences are long and seem never ending, all with the purpose of prolonging the suffering of the audience.

Even though the topic is meant to hit the ears rugged and sharp, the prolonged sentence structure is smooth and connected, so the audience doesn’t have time to absorb the subject sentence by sentence, but has to swallow the subject whole which would cause panic and emotional distress. Edwards uses certain descriptive words that take away the security of the audience. Words like, “no refuge,” “left behind,” “the pit is prepared, ready to receive them,” gives the audience a sense of impending doom.

These words and sentences are used excessively through out the sermon, which places the guilty person in a corner, until an answer is given…and when that answer is given, by Edwards, where else are they to go from a corner, but to salvation. Edwards uses a condescending voice to almost scold the audience in the beginning of the sermon, but it soon turns into more then just a scolding but retribution for what they have done as sinners.

During the description of their eternal punishment his language and voice becomes almost mocking as he speaks about, “them” and “they. ” The unconverted would feel isolated and hopeless knowing that they were condemned to hell before their death. After reaching the pinnacle of his sermon, Edwards’s tone suddenly changes to somewhat solemn, giving those who feel alone something to hope for, but still using language to convince the unconverted to accept God by saying all you have to do is this, and look what you will receive.

Those who have no hope would jump up for the opportunity for redemption when it’s alternative is eternal damnation. Edwards’s sermon was driven by passion for his religion, and his anger for those who mocked it by not accepting it as the truth. He used manipulative language to isolate the unconverted, render them defenseless with a great amount of emotional distress, then allowing them one escape route.

Sinners in the Hands of an Angry God Rhetorical Analysis. (2016, Dec 26). Retrieved from https://studymoose.com/sinners-in-the-hands-of-an-angry-god-rhetorical-analysis-essay 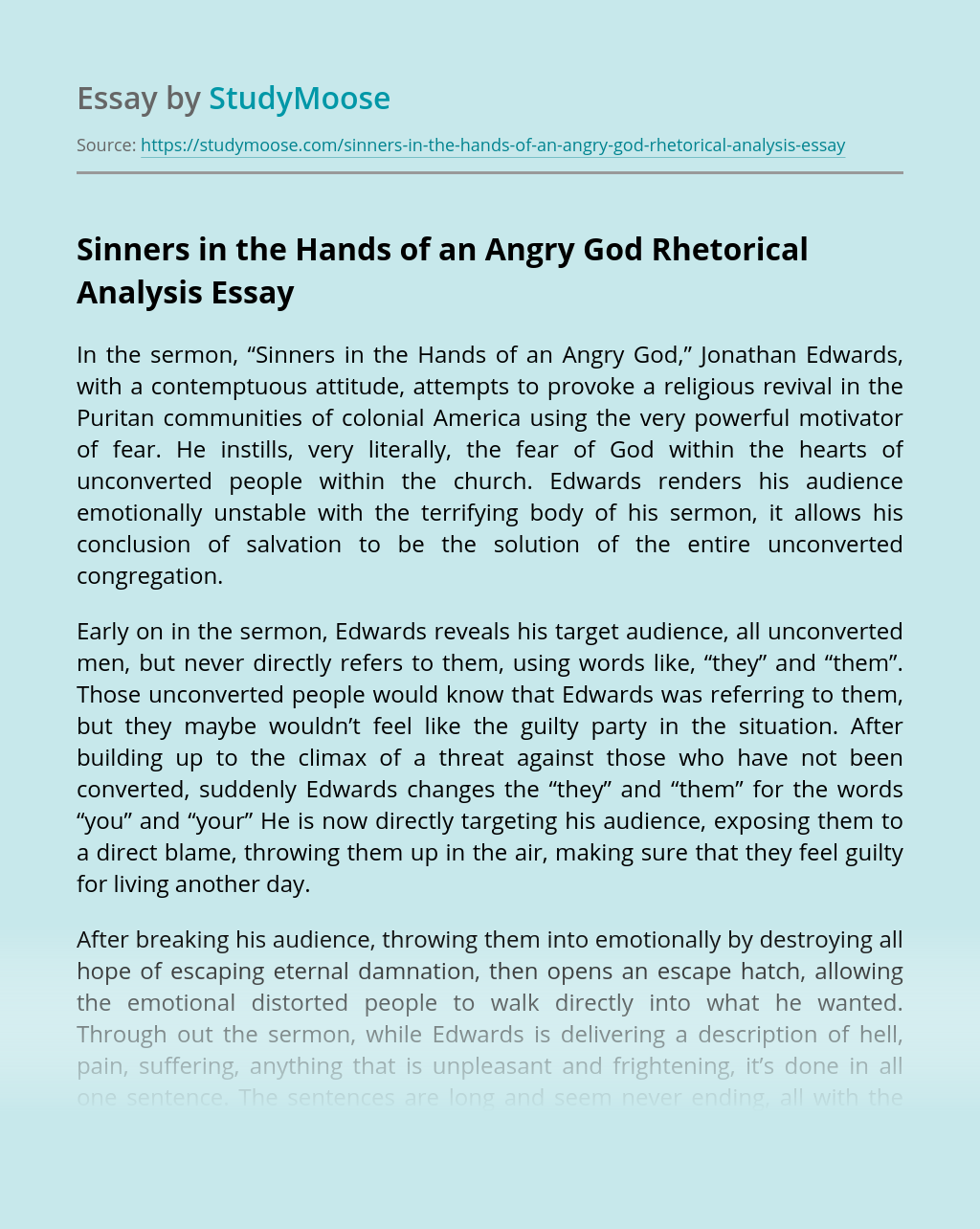 Cinderella’s story portrays a perfect example of that GOD is with those with whom no one is. Poor Cinderella grew up without her mother, and then later was raised fatherless in an abusive environment by her wicked stepmother and two stepsisters. Deprived of her possessions, rights, and dignity, she is forced to toil daily in...

Sawm is the fourth pillar of Islam and is an important act of ibadah. The word “Ramadan” comes from the Arabic root word for “parched thirst” and “sun-baked ground.” It is expressive of the hunger and thirst felt by those who spend the month in fasting. As opposed to other holidays, when people often indulge,...

In both Waiting for Godot by Samuel Beckett and Rosencrantz and Guildenstern are Dead by Tom Stoppard, the language and tone of the plays create a lack of purpose of the lives for the characters in their plays. Both plays were written during the time of the Theatre of the Absurd. The Absurdist movement was...

“I can’t go on like this”, with this last phrase Waiting for Godot ends. Although it might not seem a lot by itself, when reading the whole play it is possibly to understand about what is the character of Estragon talking about. He and Vladimir have been waiting for a person called Godot to come...

The Roman empire developed much later on than the Greek empire therefore the Romans copied almost whatever that the Greeks had established with time, such as art, literature and Gods. However the Romans did give some of their Gods various names and tasks than those of the Greek Gods. There are other distinctions, which is...