Turn in your highest-quality paper
Get a qualified writer to help you with
“ Jonathan Sewall vs John Adams ”
Get high-quality paper
NEW! AI matching with writers

Each man’s view of the cause of the revolution also differed. Sewall defended British Authority by stating that, “Man is a social Animal” and that without authority and rules there can be no society. He also contended that rules protect people and thus provide us with “unlimited freedom of action. ” Sewall believed that the colonists should be grateful that they have the King and Parliament in England to help lead and protect them. The colonists, on the other hand, felt that they were being treated unfairly by the British Government and wanted it to stop.

Sewall, however, thought that if the King had made a mistake he would have seen the error of his ways and fixed the problem. In Sewall’s eyes, “the Merchants, from a Desire of a free and unrestrained Trade” and the Clergy tricked “the simple meaning Mechanics, peasants and Labourers” into believing they were wronged by the Crown and were thus responsible for the tension between the colonies and Britain. John Adams, on the other hand, believed that parliament and the King had too much power over the colonies.

He felt that parliament did not have the right to tax the colonies.

Adams also disagreed with the decision of Parliament “that judges’ salaries be paid by the Crown rather than the colony’s legislature. ” “a move Adams believed was intended to destroy the independence of the judiciary. ” He believed that the Crown was attempting to eliminate some of the freedom that the colonists had enjoyed for hundreds of years. Thus, Adams thought that by taking away the colonists’ freedom Britain was responsible for the start of the Revolutionary War. II Some historians believe that there is a certain correlation between a person’s childhood experiences and the choices they make later in life.

This is evident when one looks into the past of both Jonathan Sewall and John Adams. Each man’s early life and upbringing impacted their loyalties during the Revolutionary War. Jonathan Sewall and John Adams views on British policies were both heavily influenced by their childhood. Sewall had been taught since he was young to value authority and “loyalty to men who served established institutions. ” Thus, Sewall believed that Britain had the right to impose whatever policies she wished and that the colonists must obey.

Although, Sewall did not agree with some of the laws passed by parliament, such as the Stamp Act, he still thought that “a bad law was far better than unlawful resistance to it. ” He thus defended the British government and became a well known loyalist, which would later cause him and his family much suffering. Adams on the other hand learned from a young age that hard work influenced your place in society. Thus Adams was more independent that Sewall in that he did not have to rely on others for his place in society.

Adams accepted the Whig argument that Americans’ liberties and very way of life were threatened by the policies of a tyrannical government in a corrupt mother country. ” III During the years since the Revolutionary War there has been a certain bias against the Loyalists. Most historians over the years have only told the story of the patriots in a favorable light. Thus, there are few people who understand the reasons behind Loyalists’ choices to stay faithful the England and the King. During the Revolutionary War there were various reasons for people to be loyalists.

Most Loyalists’ choices were affected by their upbringing. A majority of the Loyalists were born into rich families and did not want to face the uncertainty that lay ahead for supporters of the Revolution. Others had strong connections to Parliament and the King and believed that Britain had the right to tax the American colonies and thus they supported the Crown faithfully throughout the war. IV When people write persuasive essays and articles they often use images and wording to help express what they wish to get across to the reader.

Jonathan Sewall and John Adams were very skilled in doing this and could thus write extremely convincing arguments. Both used vibrant details when describing their ideas so that they would be presented in a clear and favorable light. Sewall and Adams were able to vividly describe images, in order to create a picture in the minds’ of the readers. Sewall used dramatic words to describe his feelings such as, “It is in vain to think any longer of drawing them-to such a pitch is the Frenzy now raised, that the Colonists will never yield Obedience to the Laws of the parent State, till, by Experience, they are taught to fear her power.

Adams also used his diction to his advantage when defending his position. “But it is honestly confessed, rather than become subject to the absolute authority of parliament, in all cases of taxation and internal polity, they will be driven to throw off that of regulating trade. ” By using words like these, both Sewall and Adams, were able to express their ideas more effectively to their intended audience. 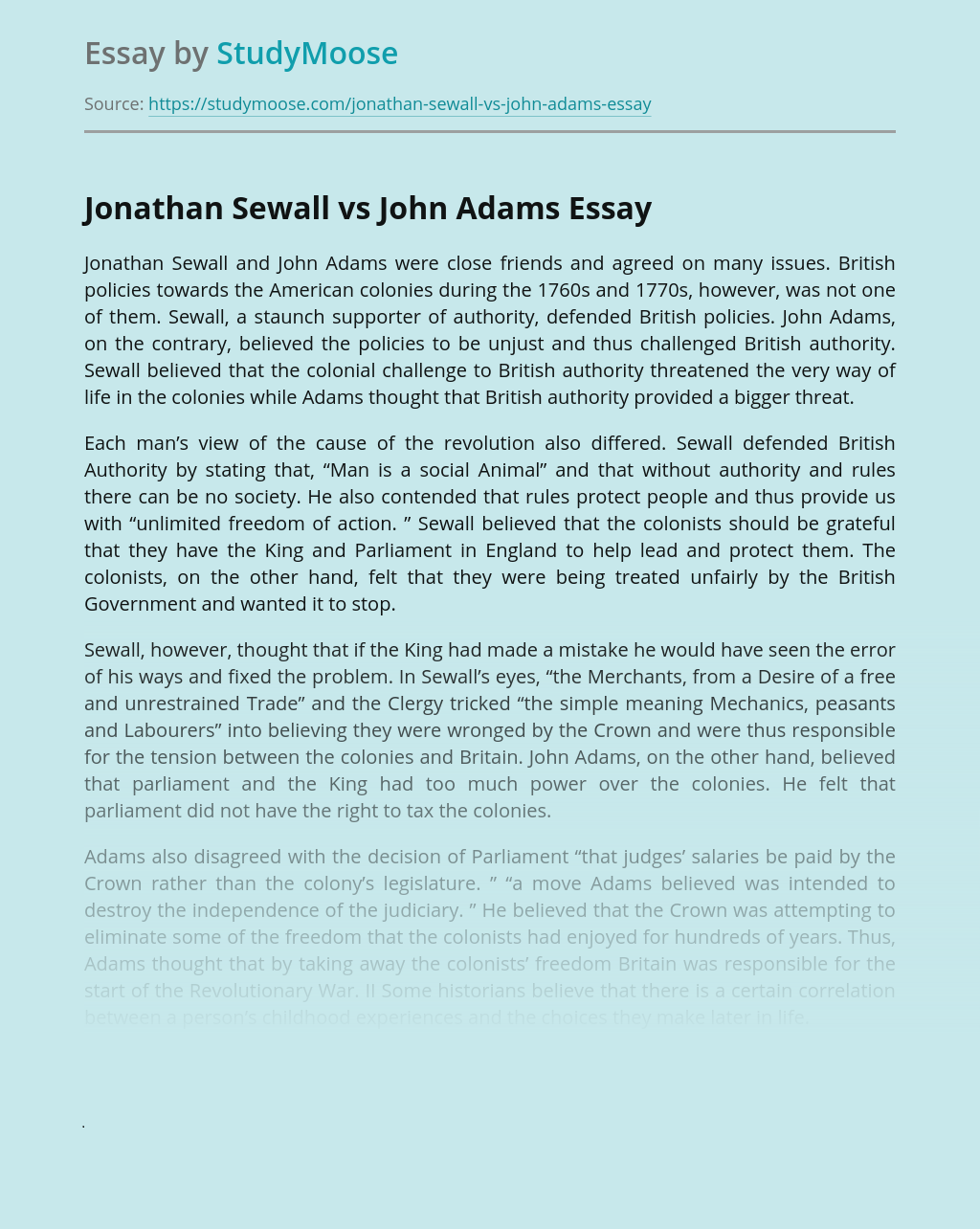 Turn in your highest-quality paper
Get a qualified writer to help you with
“ Jonathan Sewall vs John Adams ”
Get high-quality paper
Helping students since 2015
Stay Safe, Stay Original