A Modest Proposal is a satirical pamphlet that examines the attitude of the rich towards the poor starving children in their society. Jonathan Swift uses a number of rhetorical devices effectively as he highlights his proposal. He uses logical fallacies, metaphors, repetition and parallelism as well as humor, sarcasm and satire tone to highlight these negative attitudes.
Jonathan swift begins by mocking and blaming the mothers of the children by telling them that they should engage or find themselves in working to earn an honest living instead of strolling to beg for alms.

Don't use plagiarized sources. Get your custom essay on
“ Rhetorical Analysis of Jonathan Swift’s ‘A Modest Proposal’ ”
Get custom paper
NEW! smart matching with writer

He also predicts tough future for these children that when they grow up they will turn to be thieves. This is simply because the parents did not train their children the modest way of life.
Swift uses logical fallacies to make his argument in ‘A Modest Proposal’. His way of argument and thinking is incorrect and lack validity in what is proposing. This is evident in this pamphlet on line 69 to 73, ‘that a young healthy Child well Nursed is at a year Old, a most 71 delicious, nourishing, and wholesome Food, whether Stewed, Roasted, 72 Baked, or Boyled, and I make no doubt that it will equally serve in a Fricasie’.

He notes down that a young healthy child is a delicious food to be roasted, stewed and boiled to be served and eaten. Secondly, he has computed twenty thousand children to be reserved for breeding. This dehumanizes the children to be like animals.
Jonathan swift uses emotional appeal in his argument by proposing slaughter houses to be erected or built in suitable places and butchers to be employed to do the work of slaughtering the children.

He further exaggerates by saying that the children will be roasted like pigs. Jonathan knows clearly that this proposal will affect many because no person would want his or her child to be butchered. Beyond that, Swift captures the reader’s emotion on line 34 and 35 ‘prevent those voluntary Abortions, and that horrid practice of Women 35 murdering their Bastard Children’. This is a horrific behavior that is being opposed everywhere in this world.
Another rhetorical device that Jonathan Swift use in his work is irony. He says ‘I calculate there may be about two hundred thousand couple whose wives are breeders’ and ‘how this number shall be reared and provided for’. This suggestion is ironic because he compares women to animals. Also, this creates a good argument because human beings do not breed and cannot be reared. He therefore dehumanizes human beings and creates satire in this statement.
Jonathan swift in his scheme of supporting his argument, he is sarcastic that certain body parts of a child are good to eat. He further clarifies that in certain occasion, the body parts will be on demand. He further suggests that good and healthy children will be skinned and the skin will be used to make admirable gloves for ladies and summer boots for gentlemen. This idea is ridiculous to an extent that children will not only be a delicacy, but their body parts will be used to make ornaments. Secondly, he sarcastically suggests option to Ireland to counter its economic problems. Jonathan proposes that if the poor children can be food, this will create a good revenue to the country through exporting the surplus child’s flesh to the rich outside Ireland. Thirdly, Swift computes the selling price of one child to be ten shillings. This is recorded on line 103-105 ‘I believe no gentleman would repine to give Ten Shillings for the Carcass of a good fat child, which, as I have said will make four Dishes of excellent Nutritive Meat’. He proceeds and make fun of the mothers that they will get eight shillings profit to use until they will able produce another child.
Swift applies a sympathetic tone in his proposals, especially at the beginning. In paragraph two, he is requesting for amicable and a permanent solution to help these children from deplorable state they are living. He goes ahead to award anyone who will find cheap and easy method of making these children useful by building a statue in his or her memory. Jonathan’s tone is not constant in his recording of his proposals. He later changes to scary tone as he progresses to give his personal opinions about these children. For instance, he talks of butchering these children to be made delicious food and skinning of the children to make admirable gloves for ladies and summer boots for gentlemen. This tone shocks and creates fear for the reader. 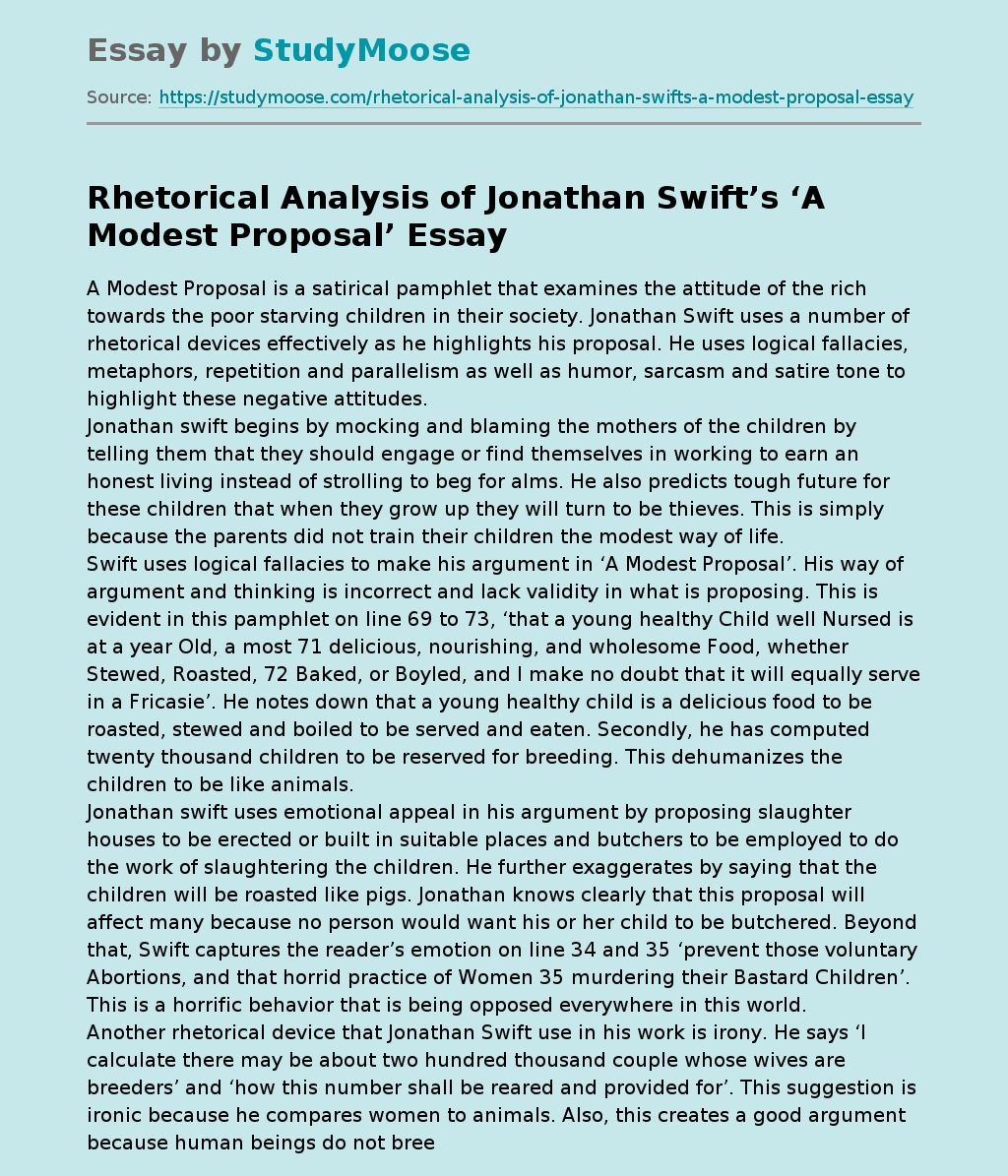