The art of confrontation can be handled in many different ways. Some may use a passive aggressive technique to make others know they are offended or something needs to change. Few people use a direct confrontation technique by approaching the person with the opposing view and having an outright dispute with them leaving nothing unsaid. There are others who avoid confrontation at all cost because they are scared of the outcome or afraid of disappointing the opposing party. A Modest Proposal uses a confrontational language called satire.

Don't use plagiarized sources. Get your custom essay on
“ A Modest Proposal Jonathan Swift ”
Get custom paper
NEW! smart matching with writer

Satire is used in several literary works to point out flaws by using sarcasm, irony, and ridicule. This type of approach has often been used by writers to shed a light on necessary political or social change, or to prevent such change.

A Modest Proposal is an essay about a concept to help prevent poor people’s children from being a burden to the country and their families. The goal of the proposal is to find an idea to help these children better the community and stop this from happening in the future.

In order to grab the attention of the audience the author, Jonathan Swift, used a satirical writing style for his essay. He jokes on previous ideas other people have proposed to solve the big problems in their society.

The other ideas are almost as absurd as the actual proposal by Swift. Although these proposals are unusually dramatic, they do cause leaders in government and other spheres to take a closer look at the true problems in their society. A proposal to eat infant babies should never be considered a rational proposal but its motives should be evaluated.

In his essay, Swift made a comment about the carcasses of the infants being used for lady’s gloves and gentlemen’s boots. When he presented this idea it dehumanized infants and made them comparable to animals whose bodies are utilized for numerous different products. This is an example of Swift using sarcasm to attract the readers and hold a mirror to the face of the community so they see there is a real problem which needs to be fixed. Swift goes on to insert proposals from his friends, one of which suggested fourteen years old could be eaten as well. This statement is satirical but goes into detail about concerns people had about the taste compared to infants and the fact it would limit the number of breeders. This idea in particular had a conflicting argument because the problem was overpopulation in the first place. Swift’s last proposal was him saying he had nothing to gain economically from this proposal. This statement alone mocks the other individuals who gave proposals to fix the problem of overpopulation because they were serious about their proposal even though it was just as absurd as Swift’s.

Jonathan Swift had to choose a satirical method of confrontation in his writing simply because he would not have received a response if he expressed his true beliefs. If he would have written his opinion and true beliefs about the state of the lower class in Ireland which truly felt was shameful and something must be done to help them, the essay would not be read around the world like it still is today. He would have had little success because there were several other straight forward proposals circulating at the time. It was hard for anyone to write a piece addressing society’s issues which had a lasting effect but Swift realized people like to criticize and they like to laugh. A satirical parody had a greater chance of getting the public’s attention in a way a standard essay could not achieve. “A Modest Proposal” surprised people and got them thinking about the condition of the poor in Ireland and what should be done about it. Swift realized when addressing and critiquing very sensitive subjects such as the nation’s religion and its authorities it is much safer to us a satire rather than directly challenging authority. The audience is entertained by the sarcasm but still able to see through the sarcasm to the real issue. A direct approach may be the obviously best choice but it’s not always the most effective as shown by A Modest Proposal. 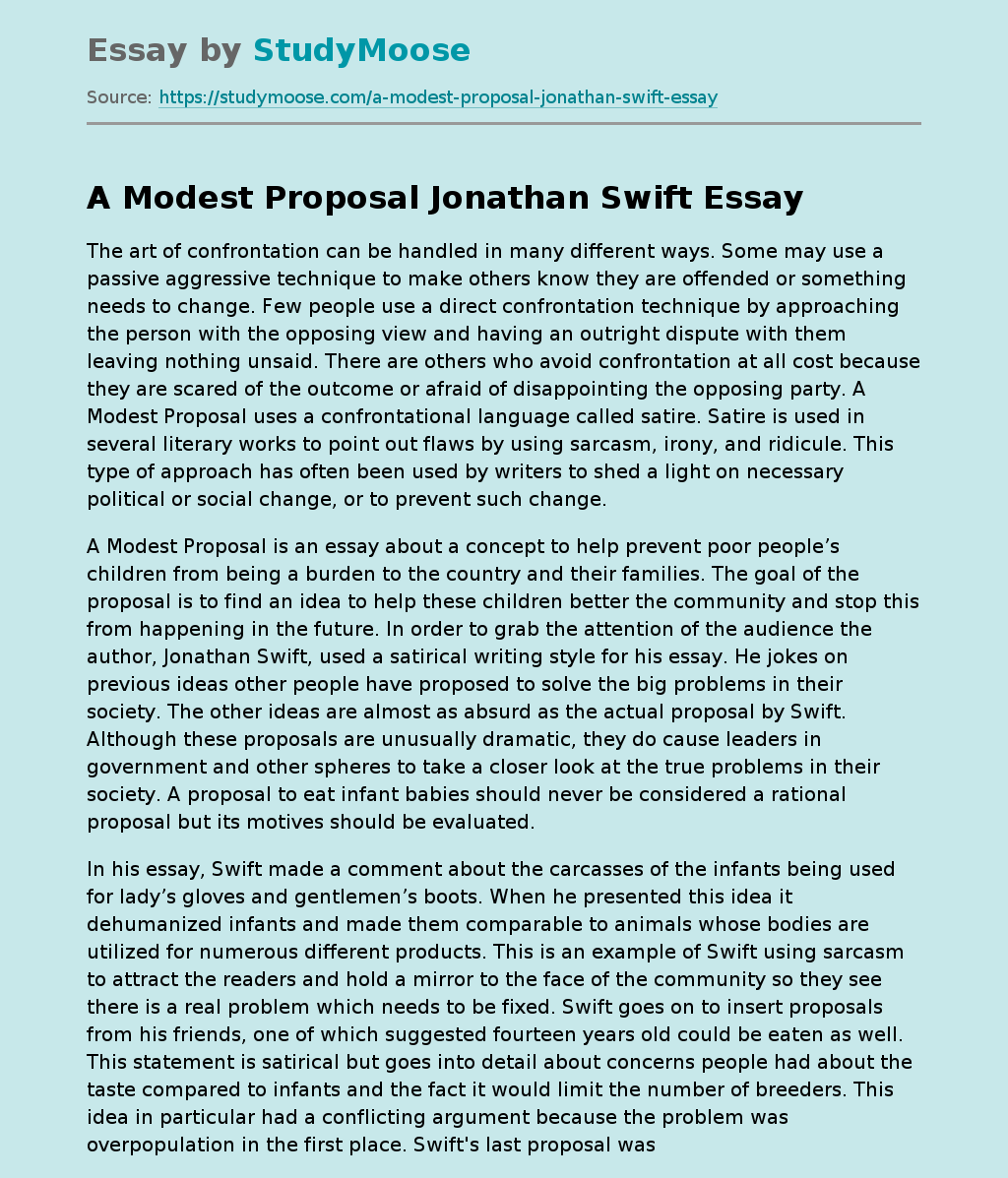