Rhetorical Analysis of "A Modest Proposal"

Since the first British colonization attempts of Ireland the island had been a place of tyrannical oppression and prejudicial mistreatment. This went on for centuries, with constant rebellion and resistance. In 1729 Jonathan Swift, an Irish clergyman living in England, denounced the cruel policies of England in a backwards manner. His use of verisimilitude in “A Modest Proposal exposes the corruption of British foreign policy towards the impoverished Irish people. He captures the minds and hearts of his audience, the British people, by posing a solution to apparent human issues of society, only to use ridiculously horrid ideas to show the true state of Irish treatment.

Turn in your highest-quality paper
Get a qualified writer to help you with
“ Rhetorical Analysis of “A Modest Proposal” ”
Get high-quality paper
NEW! AI matching with writers

To earn the audience of the British people, Swift had to play their heartstrings, as well as set up a logical basis for progression. He describes what he aims to solve as issues that would be “agreed by all parties” to be “great additional grievance[s].” Among these issues he addressed homeless beggars, especially children, “voluntary Abortions,” and the prominent act of thievery among the impoverished youth.

His focus on the youth and poor conditions of life would most likely have drawn in the public to consider what he would later propose, as they are issues that were prevalent and of dire need of solution. The human tie to the wellbeing of children would inspire the British people to want to help them in whatever way possible. He also supports his ideas by claiming that the children shall not be a “charge upon their Parents, or the Parish,” but be a benefit to society by “contribut[ing] to the Feeding and partly to the Clothing of many Thousands” of people.

This proposal not only solves the problems, but does so inexpensively and with an increased benefit of providing for the other impoverished. This logical appeal would most likely have make his audience more likely listen to his idea, as it thus would have seemed to be a convenient solution with no yet apparent drawbacks.

Juxtaposed within these statements Swift began to dehumanize the impoverished people, describing the women as “Dams,” generally a term to describe cattle or other female beasts, and “Breeders.” He slipped in these terms while stating the raw statistics of the cost of a child and the total number of impoverished children coming into Ireland annually. The use of terms of cattle during the hard facts gave Swift the ability to trick the people of Britain into considering, as was almost normal of the time, that these people were not actually people, but just a problem to be solved. By grabbing the attention of his audience and progressing to dehumanize the impoverished people of Ireland, Swift would potentially succeed in convincing, although he did not believe in it personally, that the people of Ireland were actually less than human.

He then progressed to address his actual proposal: that the homeless and impoverished children of Ireland would make a “most delicious, nourishing, and wholesome Food.” He stated various manners of how to prepare the child, when the best time for preparation would be, and even that their skin would “make admirable Gloves and Summer Boots.” The absolute horror of doing this to human children, which is murder, would then have most likely dawned on the audience. The fact that they now view them as humans, would show the hypocrisy in their previous less-than-human views of the Irish people.

Throughout the essay Swift addressed the lords and gentry specifically, having claimed that a child’s meat would be “very proper for Landlords, ” and their skin good in the application of “Gloves for Lady’s, and Summer Boots for fine Gentlemen.” His focus on the profitability of the proposal was also intended to be an appeal to the wealthy controlling power. Having their attention, he then stated that there should be no “other expedients” on top of the profit of such a system. He was referring to harsh taxes, limiting production and export, forbidding importation of luxury items, and mistreatment of workers and tenets by landlords. By juxtaposing, yet again, this hyperbole of the potential of eating children with the actual treatment of Ireland, saying that the former was the preferable of the two, he would most likely make the British people aware of the harshness of their polices and abuses. He made it very clear that he was speaking to the landlords and wealthy, then claimed that what they were doing was better than if they were eating their children. Such a claim is a harsh reality that would potentially have some reconsider their prejudice and ideals.

It is hardly likely that anyone would actually believe that someone would propose such dastardly actions as an honest proposal. By exaggerating the horrors of the ridiculous proposition of eating children he makes it obvious that he doesn’t truly believe the British should eat Irish children. He shows that what it means to be human is being destroyed by the practices of the British as it is, just as if they were consuming and murdering their children. By forcing the two things into a juxtaposed parallel, he shows that they are of the same horror and despicable nature.

Rhetorical Analysis of "A Modest Proposal". (2016, May 08). Retrieved from http://studymoose.com/rhetorical-analysis-of-a-modest-proposal-essay 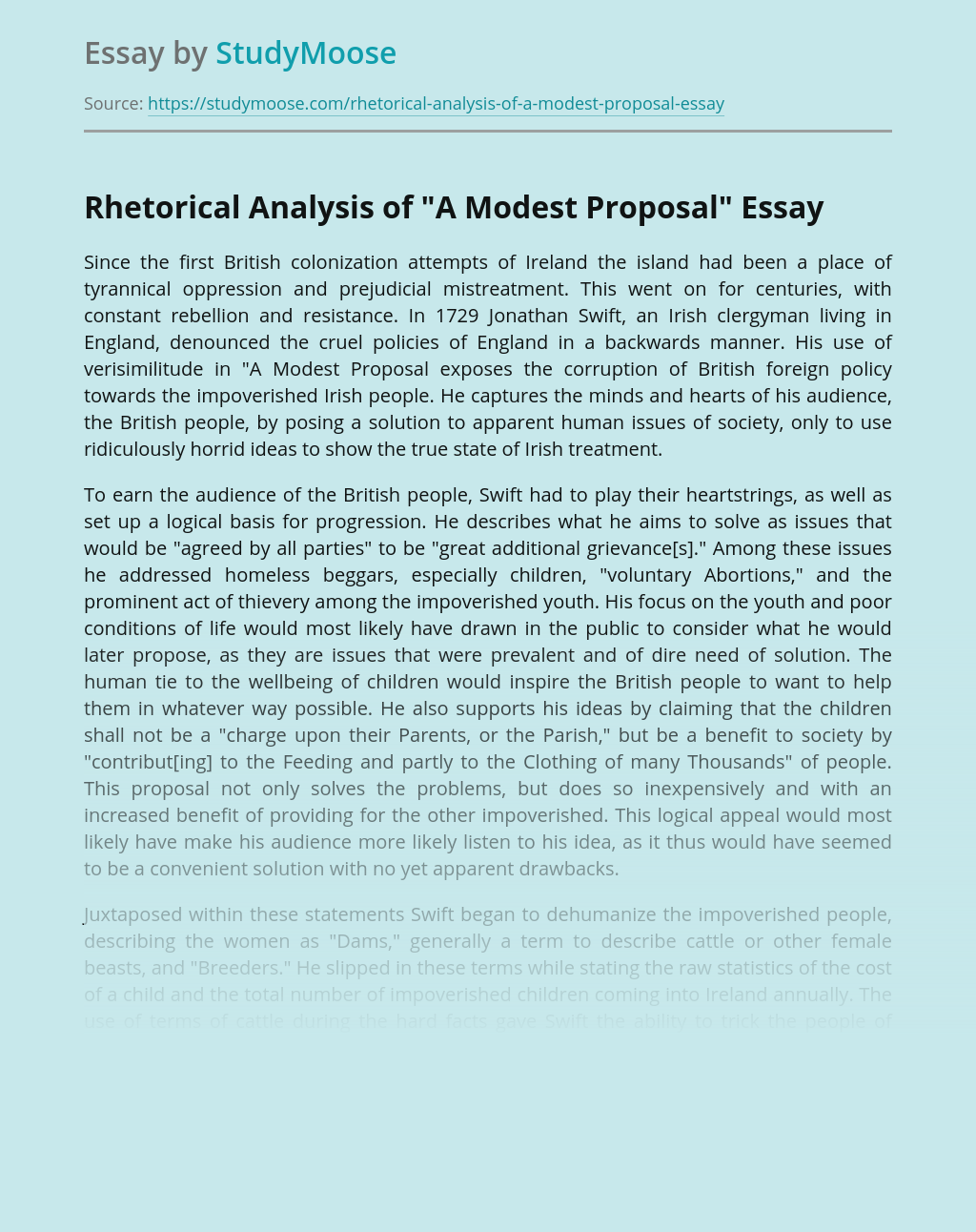 Turn in your highest-quality paper
Get a qualified writer to help you with
“ Rhetorical Analysis of “A Modest Proposal” ”
Get high-quality paper
Helping students since 2015
Stay Safe, Stay Original