Essays on A Modest Proposal 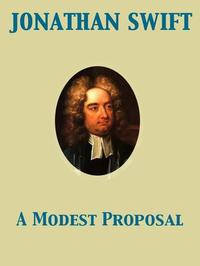 About A Modest Proposal Book

A humorous essay, “A Modest Proposal,” was written by Jonathan Swift. Since its initial publication in 1729, it has become one of English literature’s best-known pieces of satire, a reaction to Ireland’s economic crisis.

Consequently, there was an enormous divide between them. The protestant aristocracy had little regard for Catholics and did little to help them.

As a result, they placed constraints on their freedom of religion. By establishing several limitations on commerce for the ordinary people of Ireland, the Irish people were left very impoverished. In addition to the challenge of poverty, the nation was overcrowded.

Jonathan Swift hoped that things would get better soon. He made several efforts to encourage the administration of the moment to take action to advance the nation and the well-being of its people. In this respect, he sent many letters but received no answer.

So, this suggestion is another effort to make the administration understand the plight of the people. He employs humor to highlight the seriousness of the issues faced by the wider population. He was also frustrated by the lethargy and passivity of the Irish people, and he wished to rouse them.

The story’s beginning laments the impoverished Irish’s condition, who must spend all their time searching for food to put into their kids’ mouths. However, the author has come up with an excellent way to put the brats to good use: feeding them to the wealthy and powerful.

The whole situation is very understandable. When someone doesn’t immediately see the value in anything, he explains why they should. No one in Ireland will go hungry, thanks to the fact that just 100,000 of the country’s entire population will be fed dinner.

Feeding a child, you don’t have to worry about your lack of cooking experience. One of the author’s friends gives some fantastic advice on how to roast, stew, bake, and boil meals.

A bonus is that the author provides an exact estimate of how much an infant should weigh so that they can feed the most people. The greatest aspect is that raising children to eat will considerably increase the economy of Ireland.

Because these youngsters are a delicacy, they will not be cheaply sold. In addition to making parents rich from their children, the gastronomic experience will draw tourists to Ireland. A difficulty with this method, according to its author, would be the reduction in the number of invaders who might enter Ireland.

The virtuous and noble England, on the other hand, can deal with its recalcitrant residents more easily due to a smaller population. Whether you still have doubts about the scheme’s success, he advises you to ask the parents if they would prefer a whining youngster or a few pounds in their wallets.

When children are sold and eaten, husbands will treat their wives with greater respect, and parents will love their offspring in ways that have not yet been discovered, according to the conclusion of ‘A Modest Proposal.’

He contends that his approach will accomplish more than any other policy to tackle Ireland’s complex social, political, and economic challenges if it is adopted.

A Modest Proposal has the following characters:

This list includes some of A Modest Proposal’s best-known quotes:

Essay Structure On A Modest Proposal

As with other essays, “A Modest Proposal” follows a typical essay structure: an introduction that introduces the subject and thesis (“a modest proposal”), a body that elaborates on the thesis, and a conclusion. Use the same framework to construct a modest proposal essays.

The argument (sometimes known as the ‘thesis’) should be stated in the initial paragraph; the argument informs the reader of what the essay will assert and prove. In other words, this is a road map for both you and the reader.

Throughout the book, an issue is introduced, and then a solution is offered. A huge number of children in impoverished homes makes the problem of poverty in Ireland even more difficult to address.

The essay’s body is where you provide the evidence that backs up your claim. For each key point, paragraphs of evidence are arranged in sequential order. When a paragraph starts, the reader is given an indication of the topic or issue at hand. The main sentence should be the focus of every phrase in the paragraph.

The major part of the essay explains why the speaker has chosen to focus on the issue of underprivileged children, as well as providing statistics on their prevalence and current state of affairs.

Like the introduction, the conclusion is a restatement of what you said initially in the conclusion that the speaker’s idea is specific to Ireland and should not be applied to other nations.

There are other possible answers to the issue, but he ignores them because they are infeasible. He argued that these concepts are deemed unworkable by him, not because they would fail, but because no one has ever tried to put them into action.

Tips To Consider While Writing An Essay About A Modest Proposal

Do you have any idea about how to write a modest proposal essay? It is best to have a clear idea of what you want to say and how you want to convey it before you begin writing. In order to be well-prepared, you should take the following steps:

Study a modest proposal essay examples and book by Jonathan Swift. Take note of Swift’s use of sarcastic tactics, as well as the essay’s structure and tone. Start brainstorming possible solutions to society’s ills (such as the hunger in Ireland, which Swift discusses). Your issue should have ramifications for the whole population of the country.

Decide on a modest proposal essay topics that aren’t very debatable, such as an issue that affects the community as a whole and has a simple remedy. Anybody supports neither murder, malnutrition of children, nor terminal sickness.

Let your ideas flow and come up with some crazy ideas, like painting all firearms in flowery designs. Then, come up with a modest proposal ideas for essays. Have someone who is an expert in fashion say what they think about the topic.

Examples Of Good Essay Topics On A Modest Proposal

An essay outline is a graphic representation of a modest proposal essay ideas. A good thesis statement summarizes the essay’s main arguments in a few sentences, making it easy for your readers to receive a rapid overview of your work.

However, an essay outline isn’t only for your readers’ benefit—it also helps you imagine your final article before you begin writing it. This might help you establish the best way to transition between paragraphs and the optimal sequence to offer your supporting paragraphs.

A thesis statement presents the main idea of an essay, as its name suggests. There are two parts to a thesis statement: a subject and an author’s assertion about that issue that will be demonstrated throughout the essay.

Include A Lesson Or Moral

A moral lesson should be clearly conveyed if your story is meant to teach a lesson. For a lesson in a story to stick, it must be different from what is expected. Even if it has a moral, a narrative with a predictable conclusion won’t be as memorable or compelling as a story with suspense and surprises.

The goal of a modest proposal essay example is to draw attention to the problems of the Irish people. The English (who ruled Ireland) needed to admit what they were doing and implement changes to correct the problems they had helped to generate.

Examine your original draft and any revisions or recommendations you’ve received. Then go back and revise it. The irony of the essay should be hidden by a simple title like “A Modest Proposal,” which is exactly what it sounds like.

There’s no need to worry about how tough it may be for you to compose a small proposal essay. Our internet writing services have a wonderful reputation since we always supply a professional essay writer who generates a unique piece of work depending on your specifications.

The narrator’s concept is absurd and impolite, not humble and acceptable.

E. Jean weaves her “terrible experience with the male gender” (including mafia leaders, media giants, boyfriends, spouses, a serial killer, and a president) with the tales of the remarkable individuals she encounters on her road journey, producing a dark but optimistic, amusing, and compelling narrative.

Satire is clever, ironic, and often overstated. To awaken its listeners, extreme measures are used so that those who hear it will be reminded of the ethical and spiritual danger they face.

It argues for treating kids as livestock. The book criticizes the definition of satire because the readers are not expected to take it seriously.

Save Time On Research and Writing
Hire a Pro to Write You a 100% Plagiarism-Free Paper.
Get My Paper
We've found 29 essay samples about A Modest Proposal
Prev
1 of 1
Next
Other books by the author
Gulliver'S Travels
Similar genre
Victorian LiteratureParanoid FictionAdventure NovelEconomicsNon-Fiction NovelWar FictionShakespearean TragedyRealismNautical FictionEssay Collection
Get to Know The Price Estimate For Your Paper
Topic
Number of pages
Email Invalid email