It is the mistaken employment of reason that Swift finds to be the greatest flaw of human nature: “When I thought of my family, my friends, my countrymen, or the human race in general, I considered them, as they really were, Yahoos in shape and disposition, perhaps a little more civilized, and qualified with the gift of speech; but making no other use of reason, than to improve and multiply those vices whereof their brethren in this country had only the share that nature allotted them.

Don't use plagiarized sources. Get your custom essay on
“ Gulliver’s Travels by Jonathan Swift ”
Get custom paper
NEW! smart matching with writer

”(Swift 322) The fact that the horses are the most intelligent and virtuous creatures that Gulliver encounters is significant.

The human race is therefore placed below that of the animals and Gulliver hints that the horses may prove more capable of rising above their condition than man seems to be. A Modest Proposal is equally ironic and destructive of belief in the superiority of the human race. As in Gulliver’s Travels, Swift implies a comparison between man and beast in this essay.

The author masks his irony under the appearance serious scientific enquiry into poverty and the solutions that he sees as available for it.

The first part of the work deplores the condition of those children that are born in poverty and therefore condemned by the social order to a life of misery and hunger. The solution that the writer proposes is radical and astonishing: he proposes that the babies coming from poor families be used as food. The hint to the animal nature which dominates man in many respects is evident.

Swift encourages the consumption of young babies by men as an economical solution, also providing mock calculations of the profit that it would bring to society.

Human nature appears therefore as base as that of the animals that are capable of violence and cruelty in order to satisfy their instincts. Swift uses the same mechanism he sees in man and thus employs his reason to calculate and rationalize, without scruple, the value of human life: “I grant this food will be somewhat dear, and therefore very proper for landlords, who, as they have already devoured most of the parents, seem to have the best title to the children. ”(Swift 5) The author thus hints that his solution is only a response to the way in which the rich usually treat the poor.

Human nature appears in its entirety as base and selfish. Despite the fact that man has the power of reason at his disposal, he is nevertheless capable of calculated cruelty masked as a disinterested and honest endeavoring for the good of society: “I profess, in the sincerity of my heart, that I have not the least personal interest in endeavoring to promote this necessary work, having no other motive than the public good of my country, by advancing our trade, providing for infants, relieving the poor, and giving some pleasure to the rich.

”(Swift 16) Here, Swift unmasks the crimes that the social man does out of greed and poor use of his faculty of reason. The proposal is written so as to imitate the other measures taken by man in favor of social welfare. Swift hints at the exploitation of the poor and at the power abuse that the rich are often found guilty of. Cannibalism is therefore used as a metaphor for the lowliness of human nature, which is still very far from perfection. The two works outline the image that Swift had of human nature.

Despite the fact that man has been gifted with spirit and reason, he is not able to rise above his base condition. As Swift emphasizes in both of the works analyzed, man is ingenious and extremely skilled, yet he is unable to employ his reason to a truly good purpose. In comparison to animals therefore, man appears to be even lower since he cannot fulfill his potential for wisdom and spirituality. Both of the works analyzed satirize therefore man as a superior and wonderful being that is yet unable to become truly noble.

Swift dissects human nature to reveal the most grotesque aspects it contains. Man has the potential of a noble, god-like creature and yet he behaves weakly and he is often petty, selfish and immoral. Swift’s accomplishment is therefore to reveal the essence of man as a noble and base creature at the same time.

Gulliver’s Travels by Jonathan Swift. (2017, May 08). Retrieved from http://studymoose.com/gullivers-travels-by-jonathan-swift-essay 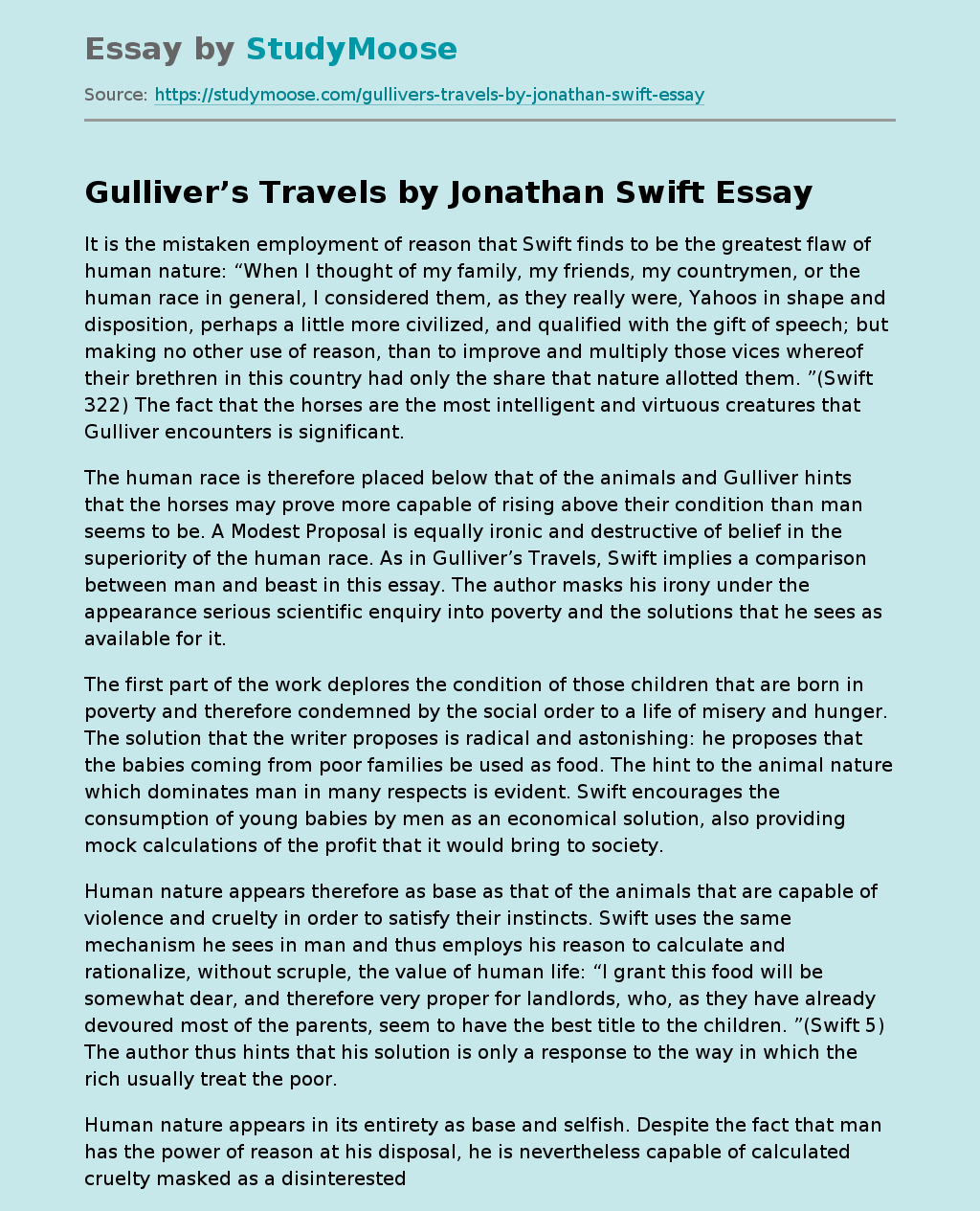