The main purpose of this paper is to explore the current experience of Muslims in America and the quest for clues as to the future interaction between Islam and American culture. In particular, I will concentrate on three areas: Islamic influence on the culture of Americans with emphasis on how it has affected political and social development; the interaction between Islamic traditions and American culture on the establishment of American Muslim Organization; and the social, cultural and educational trends among the Muslim youth in America.

Don't use plagiarized sources. Get your custom essay on
“ Muslim, Islam and American culture ”
Get custom paper
NEW! smart matching with writer

Whatever is happening to the Muslim culture in the American society and the American society as it interacts with the Islamic culture can only be comprehended by the conception of culture as a fluid entity that interacts and borrow from each other. It is important that any study of Islam in the United States must not ignore the interplay between religion and culture neither should it assume that one overwhelms the other. The experience of American Muslims puts into sharp relief matters of identity and assimilation and how they must be distinguished from the concept of values.

Even with movements such as the Nation of Islam rejecting identification with the broader culture including some of the then dominant values, it accepted other values such as the work ethic and entrepreneurship. My argument is that this selective acceptance of American values was a result of a confrontation between Islamic values and American culture seen from the perspective of an alienated minority group robbed of its identity.

The past few decades have witnessed the evolution of American Muslim organizations. The majority of these organizations until 1980s were mosques and even these were in few numbers.

Today, there exists a number of formal Muslim organizations in various areas of endeavor. The complexity of their organizations and the extent of their influence are increasing. These organizations are increasingly fitting into the weave of American culture rather than become a bulwark against it. They in effect influence the ambient culture around them. The Muslim Student association is normally the root of Islamic organization among the immigrant population. The association’s alumni are in most cases found in leadership positions of the current wave of immigrant dominated organizations (Ahmad, 2003).

The only Muslim organization with an immigrant composition until the formation of the Muslim Student’s Association in the 1960s was the Federation of Islamic Associations. This was basically an Arab-American organization founded on traditional culture rather than religion. The histories of Muslims in United States is varied with diverse and changing identities. The followers of this major world religion are not surprised at the processes of individual and community identity formation and change such as the ones that are being experienced in the United States.

There were contending interpretations, social groups, and sources of legal authority within a century of the birth of Islam in seventh century Arabia. Yet, an identifiable fundamental Islamic way of thinking and acting, founded on the example and teachings of Muhammad developed over time. This core consists of the five pillars of Islam. With its expansion to new places and the subsequent confrontation of older religions, Muslim conquered or coexisted with such religions.

Such regional interactions have influenced the ways in which this decentralized and non-hierarchical religion is practiced throughout the world. The religion lacks a centralized clergy and mosques operate independently of each other. With this regard, Muslims in the United States comprehend and practice Islam in ways strongly shaped by the American historical context. The universal Muslim community may be the goal sought by Muslims but the reality is that their everyday lives are shaped by group solidarity and experience.

It may be the fastest growing religion in the United States, poised to displace Judaism and become second only to Christianity in the number of adherents. This growth can be attributed to the rapid influx of immigrants and their relatively high birthrate. However, it is difficult to know exactly the number of Muslims in the United States. Distinctions An important distinction is made in Islamic law between the basics of fundamentals of jurisprudence upon which disagreement is not condoned, known as usul al-fiqh, and the branches or subdivisions in which disagreements and new and original problems and cases are permitted.

There has however been disagreement concerning what usul is and what furu is in the long history of disputation, debate, and disagreement among jurists since the classical period of Islam (Elkholy, 2005).. The historical debate has often been about the use, authority, and interpretation of different sources of knowledge. In the United States today, the trend among the emerging spokespeople is to assign positive commandments of the law to one or other category even though they seem to assign more and more laws to usul and to disallow disagreement about usul, thereby restricting the scope for legitimate disagreement and discussion.

There is also distinction between culture and religion. This distinction is frequently invoked as Muslims debate beliefs and practices that are accepted or unaccepted in Islam. There have been arguments among lay Muslims concerning the beliefs and practices that are fundamental to the religion and those that have accrued to it because of culture in one or another region. This issue has also been raised elsewhere by those individuals who see culture as having absorbed the function of religion such that religious difference now symbolizes basically cultural difference for the majority of Americans.

Interaction between culture and religion occurs in every realm of American Muslim world. With regard to Islamic identity, America has come to be an arena for competing self images where religious authority and cultural preferences are mostly conflated if not displaced and de-territorialized altogether. Just as some scholars have identified the conflict over usul and furu, the conflict over religion and culture in the United States mainly centers on issues involving women (Waugh, Abu-Laban & Qureshi, 1983).

Shared culture is more important than religious or ethnic diversity in determining gender roles. The conflict between parents and children, and men and women has been heightened up by migration thereby producing a rising rate of divorce. Alterations in traditional conceptions of the role of women is taking place faster in women than in men. The issue of dating is the most serious hindrance to the integration of Islamic religion and American culture. Personal relationships are considered highly by all human beings.

To young adults, sexual relationships are extremely important and they are natural. Islam has never approved of sexual activity, always confining it to marriage. The American culture on the other hand has never been comfortable with the notion of sex. The notion of adolescence is one of the most serious flaws in American culture. The American society identifies as children individuals that previous cultures characterize as young adults (Haddad, 2004).

Because of the role played by extended schooling in training young individuals for their place in the industrial system, young people of marrying age in the United States are discouraged from marriage. This denial of natural institution has resulted in fornication and unwanted mothers. The majority of Muslims have abandoned the marriage traditions of their homelands without embracing the American system, putting children in a difficult position at the time when their hormones are raging. Contributions

The strength of the American culture lies in its respect for the individual, the flexibility of its civil society, and the restraints it seeks to place on the arrogance of political power. Its weakness lies in its vulnerability to sacrifice family and personal morality to the appetites of commerce. The religion of Islam, founded on the willing submission of the individual to the divine will can be an appropriate religion for such a society. The divine will reveals the principles by which the welfare of the individual and the community are harmonized.

Muslims should therefore be able to find an important place in the American society using the framework of institution building and for individual advancement to make use of the strengths of the American culture and to help overcome its weaknesses. The major challenge to the integration of Islam with American culture is managing to disentangle scriptural commandments from cultural accretions (Leonard, 2003). This may be achieved by Muslims owing to their diverse community, race, ethnicity and national origin that makes untenable the confusion of culture and religion that has marked the stagnation of much of the Muslim world.

Beyond this, the rising number of Muslims that are born in America implies that it is only a matter of time before the Muslim community becomes dominated by indigenous Muslims who are already integrated into the American culture. As such, they are likely to have an American understanding of Islam in which case they will further its integration into and influence the American culture or they will lack good understanding of Islam at all in which case they will become secularized as the majority of Christians, Muslims and Jews before them.

The American society has to some degree been influenced by Islam just as the Muslim society has been influenced by the American values. However, there are no particular aspects of the holistic American culture that can be said to be adversely influenced by Islam owing to the communal nature of American Muslims. The influence of Islam on the Americans can also be analyzed looking at the various Muslim organizations within the United States as it is through this organizations that thoughts and convictions become shaped thereby infiltrating the general American society. 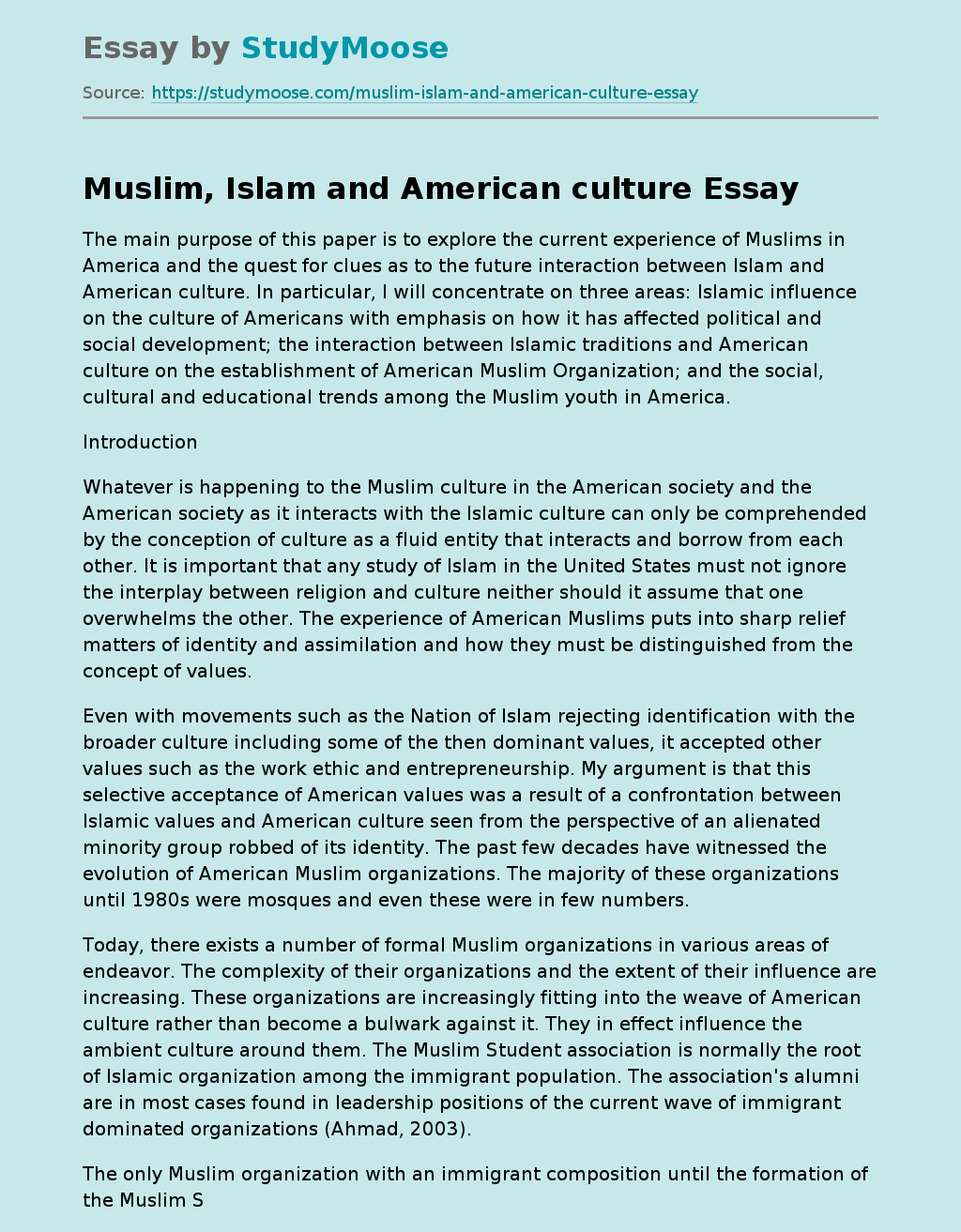