Rights and Status of Illegitimate Child, with Reference to Islam and Pakistan

According to section 338 and 338 B of Pakistan’s penal code, induced abortion (Isqat-Hamal and Isqat-e-Jnain) is strongly prohibited by the law, except in the case where mother’s life is in danger [1]. So, with the implications of the law there is a condition to give birth to every child, either it is the result of rape or fornication, adultery. After the birth of the child, he/she must be recognizing as bastard. An illegitimate child, who have no right to inherit from his putative father according to Hanfi law and has no right to inherit from his mother also, in Shia law [2].

Don't use plagiarized sources. Get your custom essay on
“ Rights and Status of Illegitimate Child, with Reference to Islam and Pakistan ”
Get custom paper
NEW! smart matching with writer

But, this is not the only matter about the right of inheritance, there are several matters related to his status in society. Like, to whom he or she consider as their child if the mother is married, who is responsible for his/her maintenance and nourishment, to whom he/she may consider as “Mehram” or “Na-Mehram” and could he get the religious and social status as the imam and judge among the Muslims? Through this research, I will examine the Islamic stance on the matter of illegitimate child in the perceptive of different school of thoughts.

And also analyze it with comparing the other standing positions, which support equal rights of all children, whether they born in the wedlock or out of the wedlock. And they strongly believe that the natural parents should take the responsibility of their children. I also highlight those affects which are closely connected with the existing law about illegitimate child in Pakistan and compare it with the current conditions of other countries, where they have the opposite law.

In the first chapter I would like to give the comprehensive introduction on the issue of the status and rights of illegitimate child, as discussing about illegitimacy, its causes, its relations with other issues and its effects on the individuals. And also discuss the law in Pakistan about illegitimate child, and what kind of problems relating to the issue in Pakistan. Illegitimacy of child is directly connected with the matter of parentage. There are two kinds of parentage, one is maternal lineage or maternity and second is paternal lineage or paternity.

Maternity is established by the mother. Generally, it does not raise any doubt as the mother of the child except in the case of surrogate mother case[3]. In the Islamic sharia it is prohibited in case if surrogate mother is not married with the owner of the semen it means she should marry to the man of which semen is going to be use. But there will be a one question arise that to which of the two wives will be the child belong? Does it belong to the genetic mother (the first wife) or the biological mother (the second wife)[4]?

But if the sperms do not belong to the husband than the child born is consider as a child of adultery or fornication and carry the status of illegitimate child. Paternal lineage or paternity is established by a father of a child and it is only legally established through marriage. In Islamic concept it can only established through valid marriage but can be break through different methods; by li’aan and by gestation period etc. Due to giving a short introduction, I can’t write here the details on these subjects. Chapter Two: Position of Illegitimate child in different views

In the second chapter I would like to discuss the rights of illegitimate child and his status under the different school of thoughts of Islam. After getting a life an illegitimate child loosing some rights which any normal legitimate child can enjoy in Islamic society like right of inheritance, a relationship status of mahram with his/her sublings and kinships relations and equal social status in society. There are also matters concerning about his custody, his expenses of maintenance, and matter of his good nourishment, giving good education etc.

There are some kinds of understandings in the society that an illegitimate person cannot become Imam of muslims or cannot become a qazi or judge in the society due to his rebellious nature until he prove his self very virtuous personality among the muslims. As Nasir Makrim Shirazi writes in his book ‘Philosophy of Islamic law’. “According to the law of inheritance, like the other physical effects, inner qualities and thinking of the mother and father is also transferred to the children in the same way the special traits of the parents are transferred to the children like the color of eyes, hairs etc.

In reality inheritance is the base for person’s future and makes the personality of an individual and prepares the ground for them for their good or bad fortune. From these points we can derive the following results Illegitimate children inherit bad manners, breaking of laws and sins from their parents. For them the ground for sins and crime is more feasible. Their polluted soul, like sparks beneath the ash become fire and burn their good fortune.

As for the question about social posts for illegitimate persons, it is a logical precaution for the protection of social good on the basis of whatever is said above about their psychological state. Islam gives much importance to persons who are supposed to take these social posts, for acquiring the confidence of the people. Therefore those families which have some defects or whose past is not praiseworthy have been deprived of posts that require spiritual purity. ”[5] And he writes more; Like the ill parents, illegitimate children are also prepared to break the laws and fall into crime if their training and studies are not provided in the right environment and healthy intentions.

It is possible they may fall into a great depth and ally with the criminals. For those reasons, in order to protect the social cause, precautions should be taken that they remain away from some posts. ”[6] Chapter Three: Defense for the Rights of Illegitimate Child In the third chapter I would like to explain the opposite concept which support illegitimate child for treating him equally.

My question is that why can’t be there equal rights for both Childs? If the both children have inherit some traits genetically from their parents, that can be some kinds of genetic diseases, then why can’t both have the right of inheritance from their parents property etc. As Nasir Makrim Sharizi writes in his book philosophy of Islamic laws on the importance of inheritance, “In reality inheritance is the base for a person’s future and makes the personality of an individual and prepares the ground for them for their good or bad fortune. [7]

Because, the parents of both kind of children are one , so both kind of children inherit same bad traits of their parents, and both got rebellious nature and polluted souls then they both will be treated equally. But it does not happen and illegitimate children are treated discriminately, which is truly wrong to the essence of justice. At one side in Islamic ethics the good nourishment of children is considering as an obligatory moral action, and on the other hand the factors which can play supportive roles in the better nourishment of illegitimate child are prevented and forbidden to him/her.

Chapter Four: Conclusion In the forth chapter, I summarize my whole debate and conclude it with extensive critical analysis on the matter of debate. I hope I will reach to a good, reasonable opinion; which can be helpful for deprived part of our society. Because I believe that adoption or fostering are not the appropriate solutions for giving a good life to illegitimate child or making orphan supporting welfare organizations for taking care of them. Methodology

Throughout the thesis I used analytical method to understand all the theoretical problems relating to the issue of illegitimate child which I am concerned. I will examine whether the current existing Islamic stance on the issue of illegitimate child is fulfilling the all conditions of justice or not. For covering the all dimensions, I will do library research. And also do some hinds of fieldwork, for getting the statistics of infant mortality in Pakistan, rapes, abortions, register cases of adultery and fornication, for strengthening my argument.

Because of it is an religious matter, so I would like to give notes from original or basic source books of religion Islam as like from the Holy Quran, and six books of hadith collection of Sunni Islam known as Saha Sitta(Sahih-al-Bukhari, Sahih Muslim, Sunan-al-Sughra, Sunan abu Dawood, Jami-al-Tirmidhi, Sunan ibn Majah) and four books of hadith collection of Shia Islam(Kitab-al-Kafi, Man-la-Yadduruhu, Tahdhib-al-Ahkam, Al-Istibsar) with two more their authentic and most reliable collection books which are Bihar-al-Anwar and Wasail-al-Shia.

Rights and Status of Illegitimate Child, with Reference to Islam and Pakistan. (2017, Feb 23). Retrieved from http://studymoose.com/rights-and-status-of-illegitimate-child-with-reference-to-islam-and-pakistan-essay 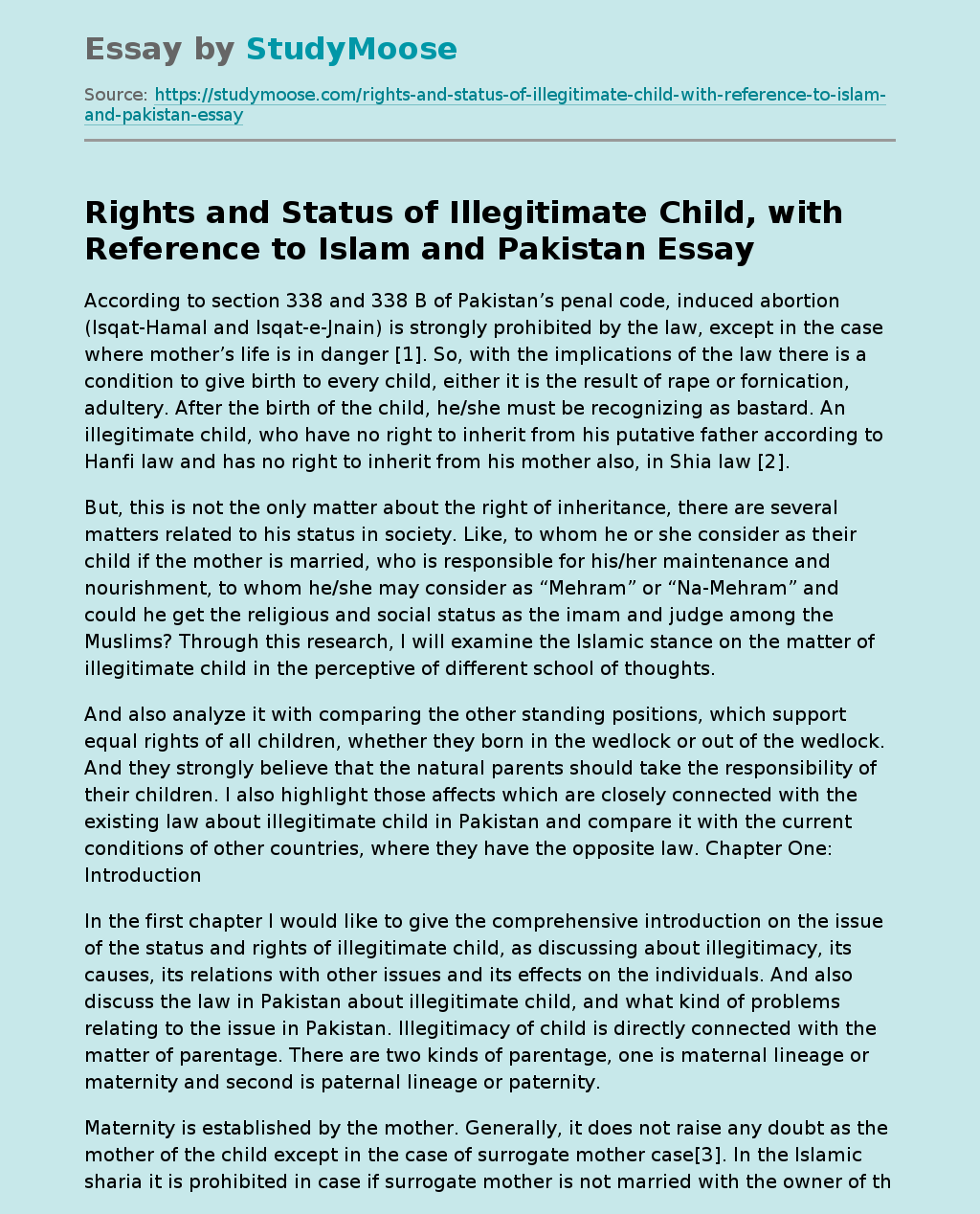