Compare and Contrast the Spread of Islam

During the first two centuries of the existence of each religion there were fundamental differences between the expansion of Christianity and that of Islam, despite early similarities in the way they spread.

Don't use plagiarized sources. Get your custom essay on
“ Compare and Contrast the Spread of Islam ”
Get custom paper
NEW! smart matching with writer

Christianity existed several centuries prior to the birth of Islam, and by the time Muhammad founded Islam in the Middle East, Christianity had moved its center to Europe, where it had firmly established itself as the official religion. But Christianity originally sprouted in the Middle East after Christ’s resurrection in A.D. 30. The church began in Jerusalem and the surrounding area, and it initially preached the Gospel only to the Jews. It grew quite rapidly for a time—in fact, the book of Acts records the conversion of 3000 Jews in a single, extraordinary day.

During this early period, however, Christianity did not expand far beyond Jerusalem and its vicinity. That would soon change. After the first few years of relative peace for the church, a terrible persecution broke out following the stoning of Stephen. Jewish leaders hunted down the followers of Jesus and threw them into prison. At this time many in the church scattered to the surrounding countryside of Judea and Samaria. Christianity’s worldwide expansion was beginning (Nosotro 1).

When Islam was founded about 550 years later, around the beginning of the seventh century, its initial experience was strikingly similar to the early experience of the Christian church. In 610 A.D. Muhammad claimed that he received revelations from God that called him to preach a new religion called Islam. At first he began to do so secretly, but after three years he found the courage to proclaim his new faith publicly and gained a growing number of followers.

However, his monotheistic message was not well received by many in his polytheistic city, where people were used to profiting from pagan pilgrims. As a result, the early Muslim converts faced persecution, just as the early Christians had. Islam’s growth was limited during this time, and it did not spread far beyond Mecca. Eventually the harassment forced Muhammad to leave Mecca, so he fled to Medina. Here he gathered many converts who became his militant followers. As with the early Christian church, therefore, persecution caused the first significant spread of Islam (Goddard 128).

The histories of Christian and Muslim expansion, however, lost much of their similarity after the points of their initial dispersions caused by persecution. Christians, for example, generally established new churches in cities, intending that the gospel would diffuse into the countryside from there. But this made the spread of Christianity during the first two centuries an essentially urban phenomenon, and it became an urban religion. In contrast, Arabia had very few cities, so Islam spread mostly through villages and rural areas. Another contrast was that the Christian church continued to face persecution throughout its first two centuries, and yet it continued to grow. On the other hand, persecution against Muslims had essentially ended by the time Muhammad died. Many such distinctions made the spread of Christianity and the spread of Islam extremely different (Hutchinson 122).

Perhaps the most significant difference between the first two centuries of the expansion of Christianity and Islam was between the methods used to spread their messages. These methods stemmed from the beliefs of each religion. Their contrasting attitudes caused Christians and Muslims to go about conversion in different manners. During their first two centuries, Christians did not force their religion on others but relied on missionaries, preaching, and leading godly lives to draw people to the one true God. Muslims, on the other hand, did not rely solely on preaching to spread their faith—they turned also to the sword. While it is true that many did convert willingly to Islam, the Muslims also conquered vast areas of land in the Middle East and Northern Africa during the seventh and eighth centuries. When they attacked or occupied new territory, they gave its inhabitants three options: convert to Islam, pay a special tax, or die. Under these circumstances many chose to pay the tax, and many others chose to convert to Islam (Nosotro 1).

The differing methods of expansion actually helped determine the area each religion would cover as it spread. Christians during the first two centuries traveled from city to city in the Roman Empire, taking advantage of the excellent Roman roads. As a result, the first two centuries saw the Gospel spread primarily in Roman territory, although it was also carried to some other areas, including Ethiopia and perhaps even India. By the year 200 A.D., Christian communities existed throughout the Middle East and Turkey, and there were several in Greece and Italy as well. Islam, however, spread from Saudi Arabia and conquered most of the Middle East and North Africa.

Muslims even extended themselves into the Iberian Peninsula and pressed north, nearly reaching Paris before Charles Martel checked their advance by defeating them at the Battle of Tours in 732. Because Islam advanced by force, it met with hostility and resistance in Europe, where Christianity was already strong. But in other areas, such as Egypt and Syria, it was accepted readily by people who had been living under suppressive rule. As a result of its method of expansion Islam could not spread far north into Europe but remained in the territory south of Europe instead (Neander 224).

Clearly, the first two centuries of Christian expansion differed greatly from Islam’s first two centuries of expansion, in spite of some early similarities. Although the spread of both religions was initially sparked by persecution, they went about spreading their messages in very different ways. As a result of Christianity’s reliance on missionaries, it spread primarily in the Roman Empire. Since Islam used force to expand its territory, it could not expand far into Europe because it met military opposition. Instead it engulfed most of the Middle East and North Africa. Even today the marks of Christianity and Islam can be seen in the areas where they first spread. After its first two centuries of expansion, Christianity eventually became the official religion of the Roman Empire, and it profoundly influenced the development of Europe and of the Americas. Islam still remains dominant in much of the Middle East and North Africa where it once created an empire (Nosotro 5).

In the beginning these two religions started on the same path of expansion. But their expansions began to differ more and more throughout the years. The spread of Islam has greatly influenced Africa. Likewise, Christianity had a great influence on Europe. Both these religions have, and will continue to have, major effects throughout history.

Nosotro, Rita. “The Spread of Christianity and Islam”. April 07, 2008 http://www.hyperhistory.net/apwh/essays/comp/cw11christislamexpand.htm.

Compare and Contrast the Spread of Islam. (2016, Jun 04). Retrieved from https://studymoose.com/compare-and-contrast-the-spread-of-islam-essay 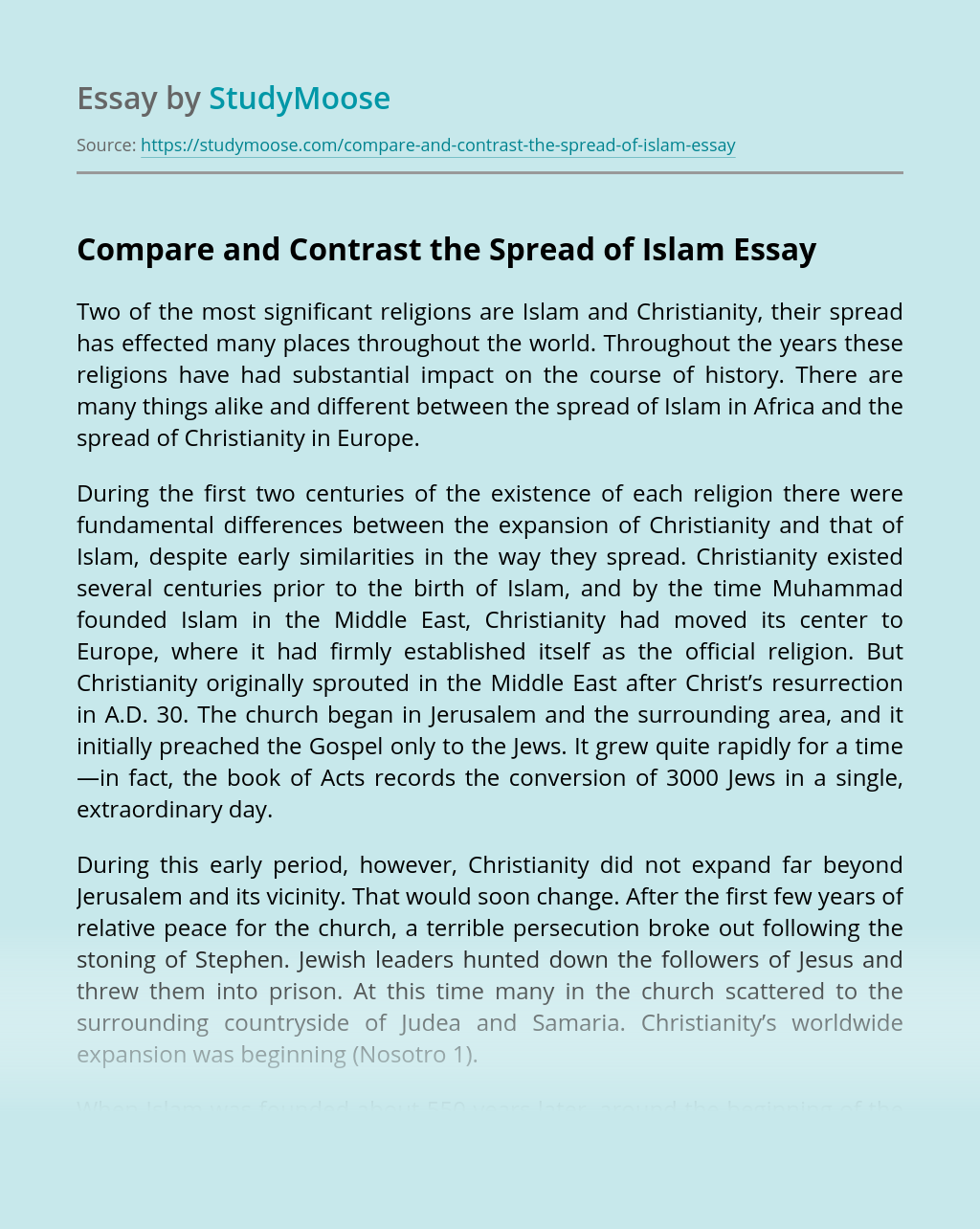