History and Spread of Volleyball

The sport of volleyball was created by a man named William G. Morgan of Holyoke, Massachusetts in 1895. Morgan was a physical education teacher at the YMCA and called it “Mintonette”. It was an indoor or outdoor pastime that had characteristics of both handball and tennis. The first rules were written down by Morgan himself. He wrote that the game called for a 6 foot 6 inch net and a court of 25×50 feet. A match composed of 9 innings and 3 serves for each team in each inning.

Don't use plagiarized sources. Get your custom essay on
“ History and Spread of Volleyball ”
Get custom paper
NEW! smart matching with writer

In case of a serving error they got a second chance just like in tennis.

If the ball it the net on a serve it was considered a foul and it caused a side out or a point was taken away. In 1896 after a demonstration at the YMCA in Springfield and the name “Mintonette” was replaced with the name “Volleyball”. In 1900 the rules were modified and the height of the net went up to 7 feet 6 inches. A match length was set at 21 points.

In 1900 Canada was the first foreign country to adopt the game of Volleyball. Cuba discovers “6 Volleyball” in 1906, thanks to a North American army officer, Agusto York, who takes part in the second military intervention on the Caribbean island.

In 1908 Volleyball reaches Japan. It is Hyozo Omori, a Springfield College graduate in the United States, who first demonstrates the rules of the new game on the YMCA courts in Tokyo. In 1910Volleyball officially lands in China, thanks to Max Exner and Howard Crokner. Up until 1917, play is between 16-man teams and goes to 21 points.

The Philippines also got to know the new game. It is imported by Manila YMCA director Elwood Brown. In a very short space of time, there are 5,000 public and private courts. In the USA, decisive impetus is given to the game by Prevost Idell, YMCA director in Germantown.

In 1912the court size is changed, becoming 35×60 feet. A uniform size and weight of the ball is established, calling for a circumference of 26 inches and a weight of between 7 and 9 ounces. Two other important innovations: the number of players on each team is set at six and it is decided to rotate players before service. In 1913 Volleyball is put on the programme for the first Far Eastern Games held in Manila. Teams are made up of 16 players. In 1914 George Fisher, secretary of the YMCA War Office, includes Volleyball in the recreation and education programme for the American armed forces.

In 1915 The number of players on court again becomes variable, anything from 2 to 6 for each team. Official game time is introduced and it is decided that the team losing a game has the right to begin serving in the next game. And In Europe, Volleyball arrives on the French beaches of Normandy and Brittany with American soldiers fighting in the First World War. Its popularity grows rapidly, but the game takes root especially in Eastern countries, where the cold climate makes gym sports particularly attractive. In 1916 Many new rules are established.

The score for a “game” drops from 21 to 15, and it is determined that to win a match a team has to win two out of three “games. ” The ball can now be hit with a player’s feet. Net height rises to 8 feet, while ball weight climbs from 8 to 10 ounces. It is decided that holding on to the ball is a foul and that a player cannot have contact with the ball a second time until after it has been played by another athlete. Volleyball becomes a part of the programe of the NCAA, the body that oversees college and university sports in the USA.

In 1917 at the Allied Forces air base in Porto Corsini, where Ravenna’s sports palace is now located, American airmen introduce the virus of Volleyball into Italy. In 1918 The number of players per team is set at six. In Japan, the first High School Championship is played. In 1919 During the First World War, Dr. George J. Fisher, as Secretary of the YMCA War Work Office, makes Volleyball a part of the programe in military training camps, both in the USA and abroad, in the athletic handbooks written for those responsible for sport and recreation in the Army and Marines.

Thousands of balls and nets are sent overseas to the U. S. troops and also presented to the Allied Army’s sports directors. More than 16,000 volleyballs are distributed in 1919 to the American Expeditionary Corps Forces only. The Inter-Allied Games are organized in Paris (but Volleyball is not included since the game is not yet known sufficiently well known in the 18 participating Allied countries to allow for a balanced competition). Moving through history volleyball has changed. In 2001 Beach Volleyball is confirmed as a full Olympic program sport.

And in 2002 the FIVB World Congress in Buenos Aires adopts a Code of Conduct and rules against conflicts of interest and introduces height limit competitions (185 cm for men, 175 cm for women). In 2009Brazil won their eighth World League as they defeat Serbia in Belgrade in a pulsating match watched by a crowd of 22,000 spectators whilst Brazil also pick up the World Grand Prix, finishing above Russia and Germany. Italy’s women follow up their 2007 World Cup win with claim their first FIVB World Grand Champions Cup in Japan as Brazil won the men’s competition.

History and Spread of Volleyball. (2016, Sep 09). Retrieved from https://studymoose.com/history-and-spread-of-volleyball-essay 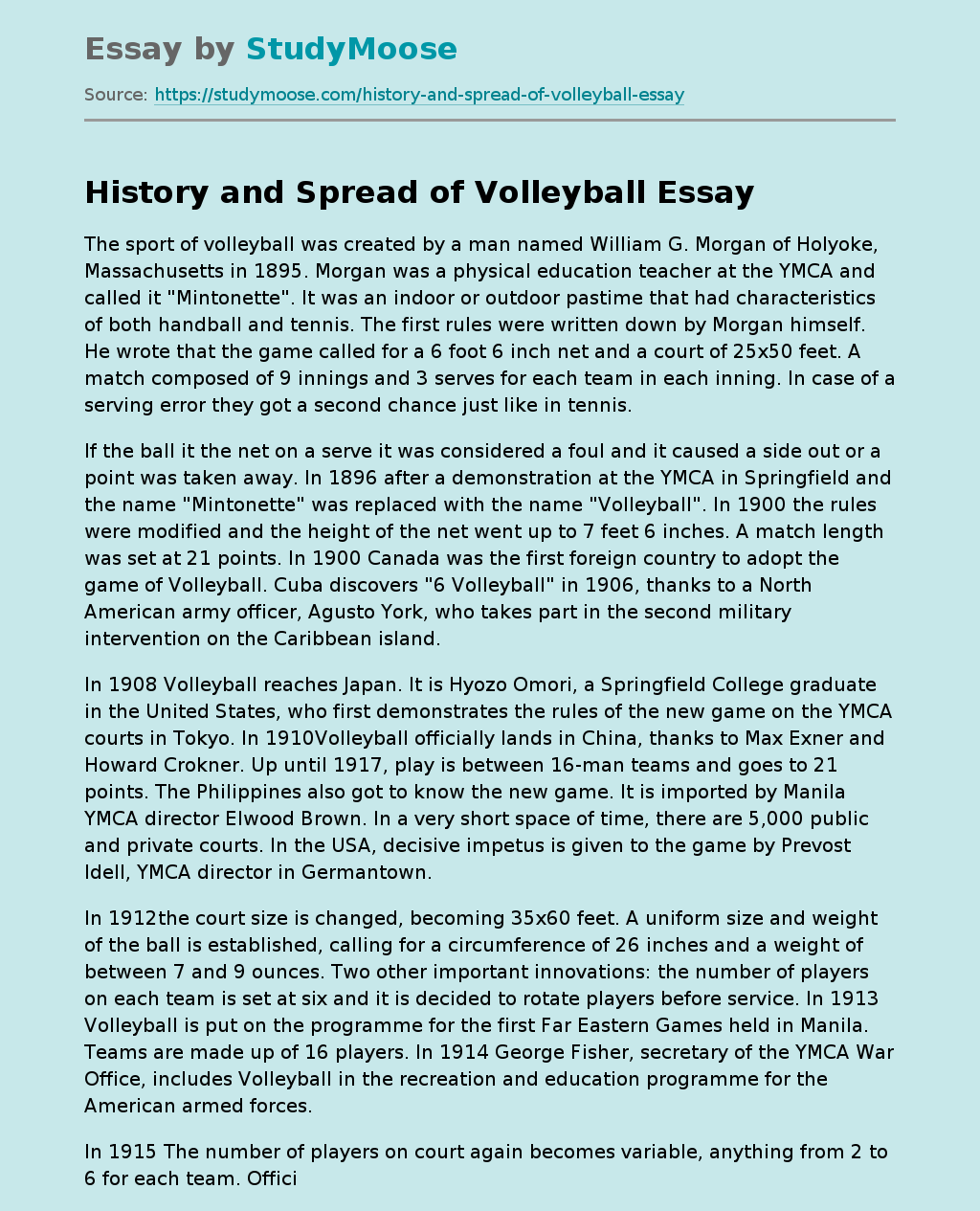