GROWING up in an all boys school, it was evident that some sports were favored more compared to the others. P. E class was that special time of the week for students to relax and unwind from the burden of academics. Basketball, Soccer, and Baseball were always the top picks that everyone looked forward to playing. I must admit, I’m a fan of team sports that require not only plenty of skill but teamwork as well. I suppose that’s why these three would definitely be at the top of my list.

Don't use plagiarized sources. Get your custom essay on
“ Volleyball: Game and Sport ”
Get custom paper
NEW! smart matching with writer

However; with every favorite sport, there would always be that one sport that you would rather avoid.

It’s not that I have anything against this sport; it’s just that I never really found it appealing; I didn’t give it a chance and never fully learned it in the process. Truth be told, Volleyball is a famous Olympic sport known worldwide. It may not be as famous as Soccer or Basketball but this sport gets much recognition from both local and international scenes.

Many games are shown frequently on various sports channels on TV such as Balls, ESPN, and Star Sports. Despite the sport’s overall popularity, sadly Volleyball never really had a marvelous reputation for me back in high school.

Oftentimes, this sport would be regarded as the “gay sport” since majority of our gay classmates were fond of this sport. I’m not trying to stereotype, nor am I trying to be mean or sexist.

There’s nothing wrong with being gay, but Volleyball as a sport shouldn’t be viewed this way. Sports are there for everyone to enjoy, we should never limit the people who play it. Perhaps this is a common misconception among the youth and could be a reason why this sport isn’t as well loved compared to the others.

Looking back, I shouldn’t have been too absorbed with the sports that I only knew. If I wasn’t so judgmental and more open minded instead, maybe I would have been good at another sport today. After surfing the web for some time, I realized that Volleyball isn’t such a difficult game to play, but some rules can be a little confusing, especially for rookies. Just like any team sport, in order to play you must first have players so that you can form two teams that will compete against each other.

Each team needs to have six players, who correspond to a particular role when playing. There are five different positions in Volleyball that are equally unique and important to the team. The first one is the Server, who is responsible for setting the ball into play during the game; he/she should have a wide knowledge of the sport. The second is the Spiker whose purpose is to score as many points by hitting the ball over the net. The next one is the Setter, his/her main job for the team is to set up the ball for the Spikers in order to score points.

The Passer is the player that makes sure that the Setter receives the ball in order to set up the Spikers for offense. Last but not the least is the Digger, who chases and dives after the falling ball in order to pass it to the Setter. These five positions can be simply classified into two types: Front row players and Back row players. Front row players are essentially there for offense as they try to hit the ball over the net and towards the opponents side; Back row players on the other hand are there for getting the shots of the opponents and passing it to the offensive players.

Before the game begins, you must first decide the number of points that will be played upon between the two teams. Usually a game is up to 21 points or any number agreed upon, the team that wins two out of three games wins the match. In order to score a point, the ball must only land inside the boundary of the opponents’ area. The game starts when the player (Server) serves the ball by hitting it until it flies over the net and reaches the opponent’s side. The ball can graze the net and fall to the other side to still remain in play.

When the other team does score, possession of the ball will now go to them. This cycle will continue depending on who scores until the game will be over. The thing that really confused me with this sport was on how players the rotate. I had a hard time trying to understand it just by reading the articles; I watched videos instead in order to see what this was all about. After doing so, it all became very clear to me. Each time you win the serve from the opponent your players rotate one position clockwise.

If you keep or lose the serve your team doesn’t rotate. After learning more on Volleyball through various articles and videos on the internet, it made me want to try to play this game again. I’ll never really know if I will like this sport without trying it wholeheartedly this time around. It might get a little frustrating at first, since I haven’t fully immersed myself the complete knowledge of the sport. I still have to familiarize myself with the correct skills and game rules which may take some time.

But I truly believe that if a person has the passion for something, inexperience will never be a hindrance to success. However, this sport can never replace my love for Basketball and Soccer; they just mean so much to me, I have cherished both of these sports from a very early age. Volleyball is one sport that I am really looking forward to learning; you never know when it will come in handy. Who knows, maybe one day as you quietly stroll along the beach, five beautiful blondes ask if you would want to join their game since they lack one person. Now who wouldn’t want that? 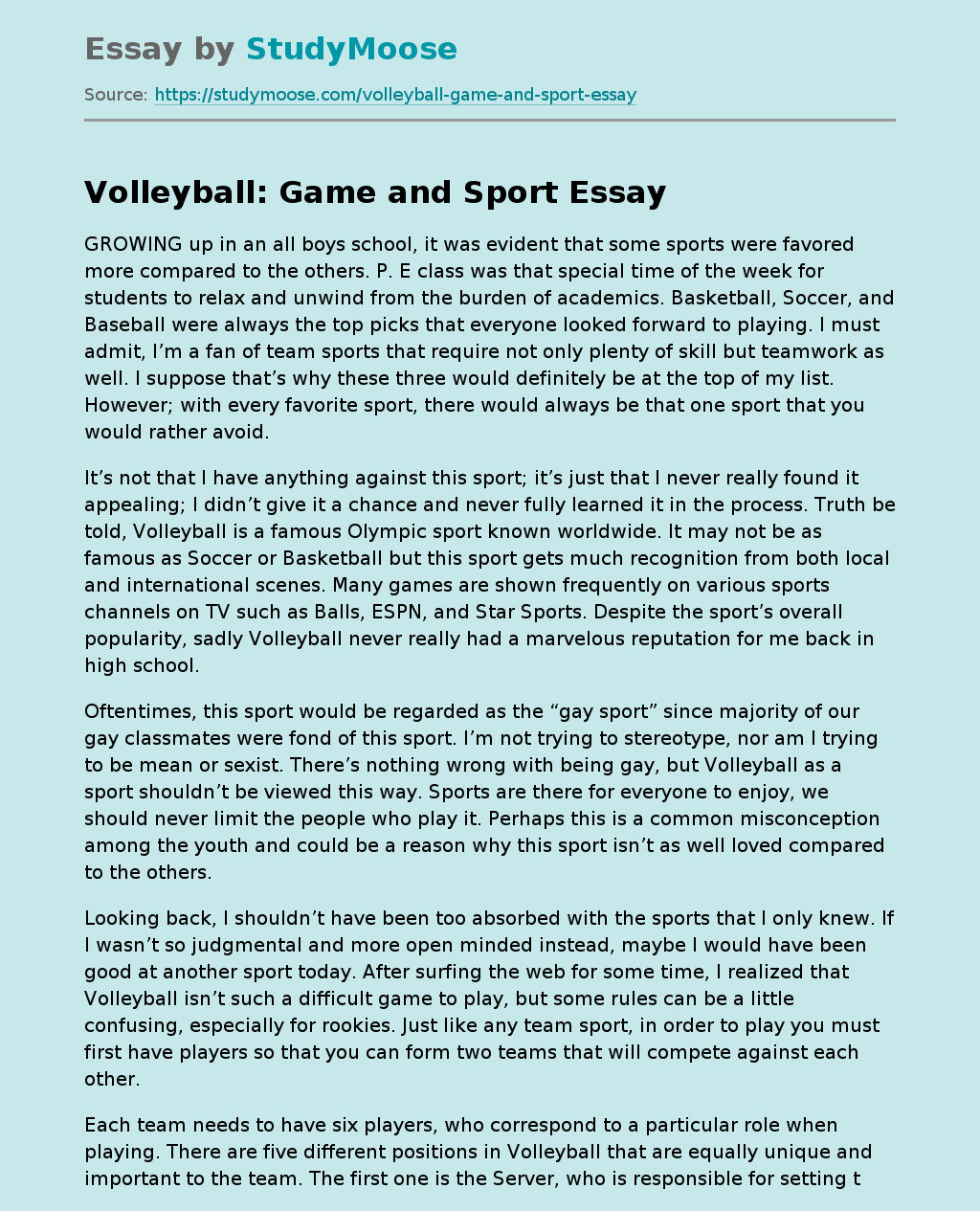