Don't use plagiarized sources. Get your custom essay on
“ Basketball vs. Volleyball ”
Get custom paper
NEW! smart matching with writer

Basketball consists of five players on court. The positions are point guard, shooting guard, small forward, power forward, and center. The point guard is the leader of offense who uses passing and dribbling skills to set up teammates for open shots. The shooting guard has the ability to steal the ball from the opposing players. The small forwards’ job is to attack the defense by driving and cutting towards the basket.

The power forward gets the rebounds, especially on defense. Most of the points from this player come from short-distance. Lastly, the center position is usually the tallest player; and their job is to block the opposite team’s shots, and catch their rebounds and shoot. On the other hand, volleyball has six players on court. The six players on court contribute a lot to the team. The main positions are the setter, two power hitters, two middle hitters, and a weak hitter. The setter makes the decision of who gets the pass; this player touches the ball on the second contact and passes it to most effective player.

The weak hitter is the alternative option of the middle and power hitters; this player must also be a good blocker. Despite the different positions both teams have, each player does have a designated area on the court to play in basketball and volleyball. The positions on court also contributes to the scoring system. Secondly, the scoring system in both sports differ. In basketball, to successfully score a point, the ball must completely pass through the basket. The most common shot is the two points shot which is taken from inside the three-point line. If one successfully makes that shot , they earn two points. Another shot one can take is the three-point shot, which is taken outside the three point line. If the player crosses the line after releasing the ball from their hands the shot is counted as a two-pointer. If at any time the opposing team commits a foul on the player, the player is rewarded with a free throw.

Depending on the foul, one can either get one or two free throws. The free throw is taken 15 feet away from the backboard. On the contrary, the scoring system for volleyball differs from basketball. Regardless of how the player gets the point, they will always be rewarded with one and there is no fouls in volleyball. There is two ways a team can gain points. In a rally, the common way for the ball to land anywhere on the opponent’s side of the court or the opposing team to hit the ball out of bounds. Some faults players can commit are bring out of position to start off the rally or if the players make inappropriate contact with the net. An improper contact with the net for example would be pulling the net down in order to hit the ball would earn the opposing team with a point. The serving team must rotate so every player on court had an opportunity to play each position; failure to do so can grant the opposing team with a point. An improper serve causing the ball into the net can also grant the opposing team with a point.

The scoring system in both sports can also determine the length of the game on the bases of time and scoring limit. Lastly, in both basketball and volleyball the length of the games also differs through different factors. In basketball, the game consists of four quarters, each being eight minutes long. If there is ever a draw for basketball, there is a fifth set to break the tie of five minutes. In basketball, between the quarters there is always a minute long break. Also in half time, there is another break which is five minutes long. On average, a basketball usually takes about an hour and a half including all the break and fouls. On the other hand, volleyball consists of three sets, and the team must win at least two, to be declared the winner. One must have a two point lead in volleyball to win. On the contrary, volleyball games usually last about an hour.

Basketball and volleyball are enjoyed worldwide by many people and age groups ranging from professional teams to schools and local teams. Despite the differences between the two sports, basketball and volleyball, there is no better sport. There are so many differences; for instance, the positions, scoring system, and the length of the game, it is hard to choose which one is better than the other. At the end the two friends could not come up with which sport is better because they are different in so many way. 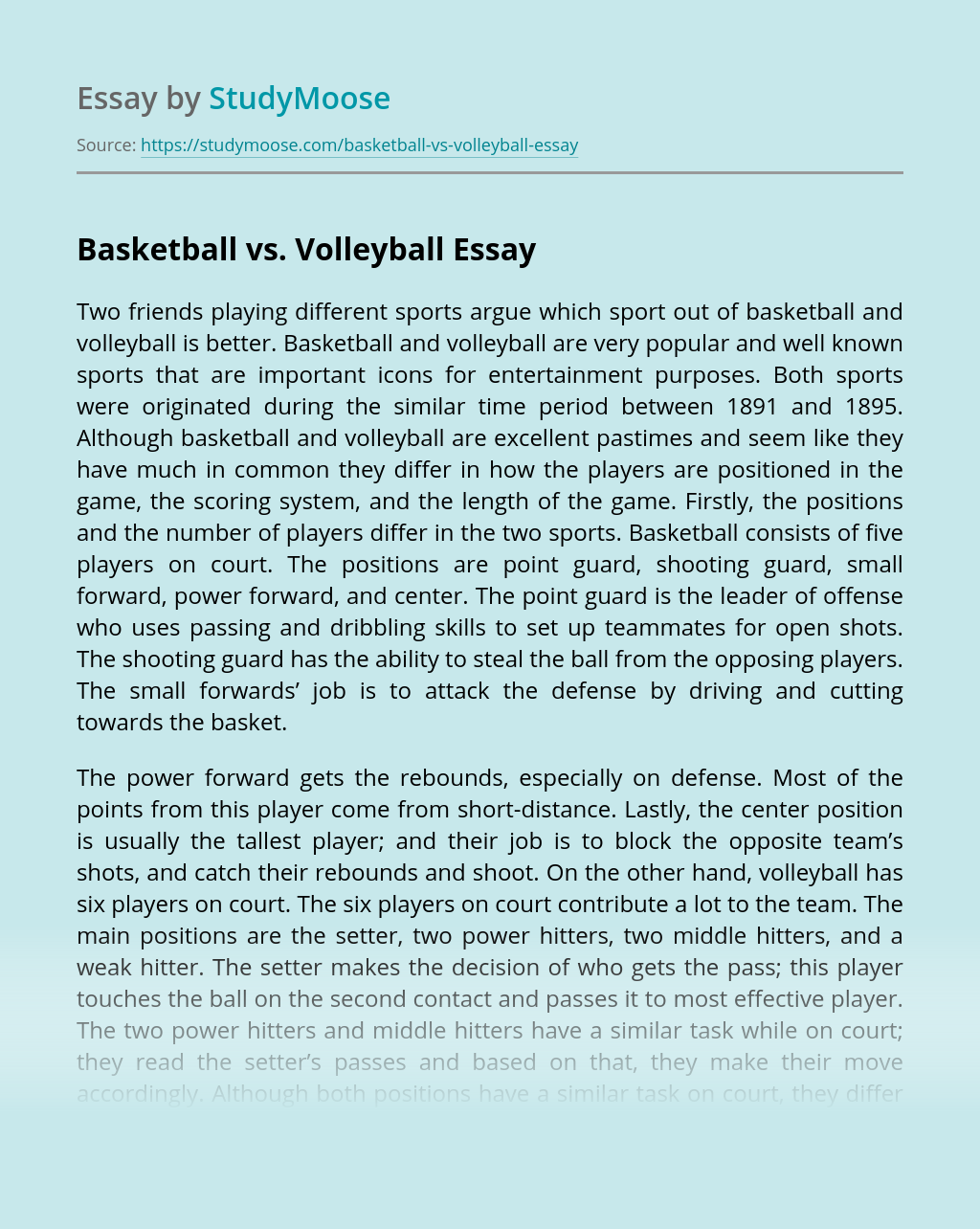