Physics is the study of energy and how it is transferred from one particle to another. There is certainly a lot of energy transferred between objects and players in the sport of volleyball. A few of the concepts of physics that take place during volleyball include gravity, displacement, velocity, acceleration, projectile motion, and force. These concepts are displayed throughout the different positions on the court. There are three main aspects of volleyball that include physics, the first one being displacement.

This happens when a player moves to their position on the court and when the ball moves from side to side.

Don't use plagiarized sources. Get your custom essay on
“ Physics of Volleyball ”
Get custom paper
NEW! smart matching with writer

Displacement is relative to all positions on the court of volleyball because all six players should be evenly spaced on their respective side. Each player on the court is assigned one of the six positions. Even though they’re only assigned one position, they move and adjust to the play according to their teammates and the direction of the ball.

Secondly, velocity is the speed of the player and ball.

Velocity is commonly expressed as the change in displacement in a given time. One of these areas where velocity is found in volleyball would be when a player spikes the ball. With the proper velocity, the ball will hit the floor without a defender being able to react quickly enough to the attack. Thirdly, there is gravity, If there was no gravity the ball would not come down nor would the players. Gravity is essential to volleyball because without gravity the players would not be able to stay on the ground and enjoy the game.

Also, the ball would float away from the people participating in the game. There are two major concepts of physics for serving, velocity and acceleration. As the ball’s velocity increases its distance also becomes greater. Since the ball is in constant acceleration, the velocity increases by the same amount of time. With the proper velocity, the ball will hit the floor without a defender being able to react quickly enough to the attack. Acceleration goes hand-in-hand with velocity. Acceleration is defined as the rate at which velocity changes.

The ball, along with players on the court, both have acceleration. There are times in a volleyball game when the ball has constant acceleration, when the ball is served. When the ball is hit by a player for a spike, the rate at which it reaches is maximum velocity is the acceleration. In order to determine when to hit the ball, you need to calculate the trajectory, speed, and placement of the set. When approaching the ball, the body has kinetic energy and this energy turns into potential energy.

This allows the player to jump higher. Since potential energy is the product of the mass of the player, gravity, and the height of the jump, the height is what determines how much potential energy will be attained. When the player hits the ball, it puts as much momentum into it as possible, the shorter amount of time the hand is in contact with the ball, the greater the momentum. Physics affects every aspect of the sport of volleyball from hitting, defense and serving.

Without the concepts of physics that take place during volleyball include gravity, displacement, velocity, acceleration, and force, there would not be the sport. Understanding the physics behind the game can make someone a better player because they can learn how the game works and react to it accordingly. 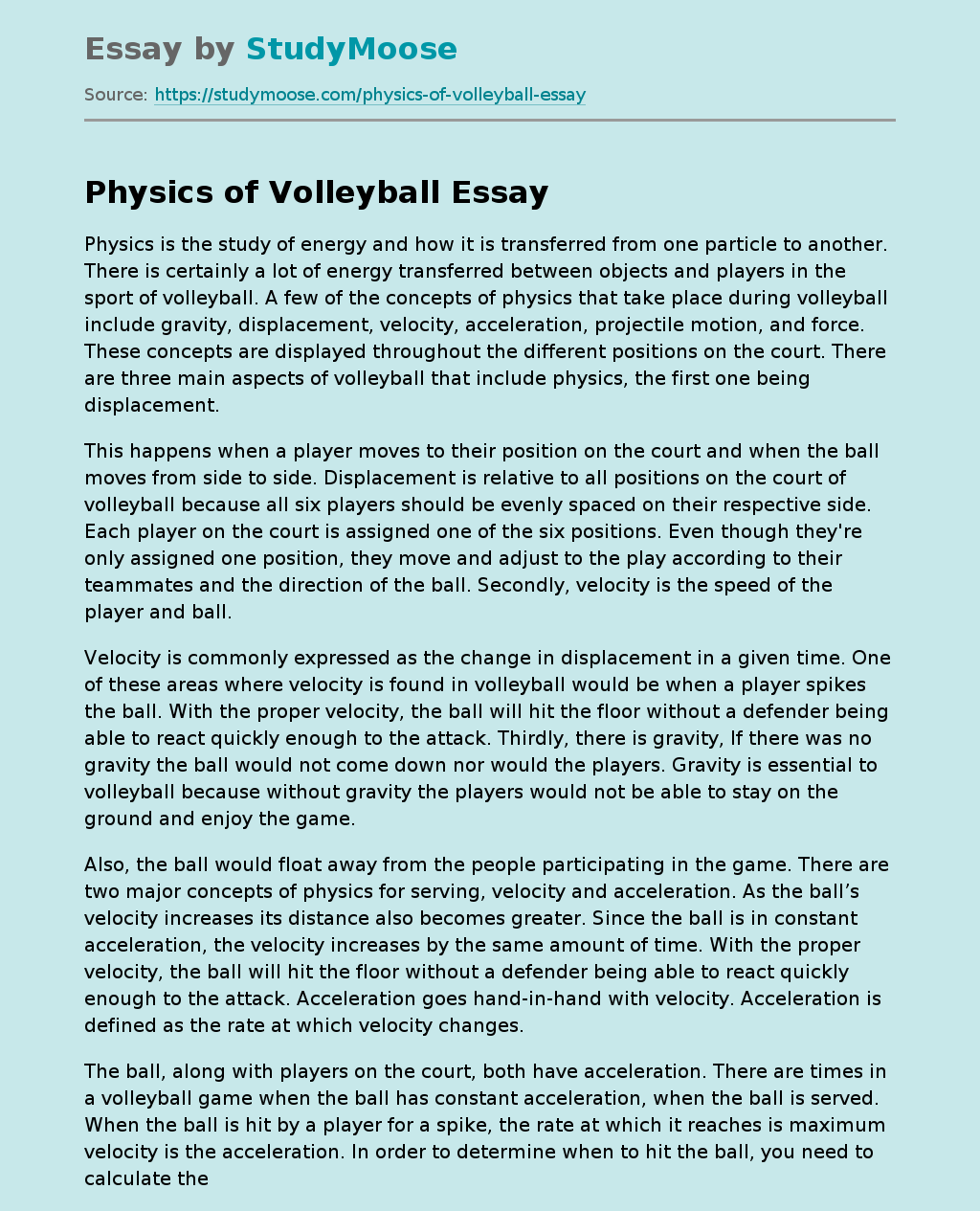