On February 9, 1895, in Holyoke, Massachusetts, William G. Morgan, a YMCA P.E. director, made a game called Mignonette as a fun game to pass time by , to be mostly be played inside but could be played outside, by any number of players. The game took some of its characteristics from tennis and handball. Another indoor sport, basketball was becoming popular in the area due to the fact that it had been invented just ten mile away for Springfield Massachusetts, four years before volleyball was.

Don't use plagiarized sources. Get your custom essay on
“ History Of Volleyball ”
Get custom paper
NEW! smart matching with writer

Mintonette was designed to be an indoor sport, less rough than basketball, for older members of the YMCA, while still requiring the players to at least have some type of athleticism. Volleyball is a sport that is becoming more and more popular as the days go on. Volleyball is a team sport in which two teams of six players are separated by a net. Each team tries to score points by grounding a ball on the other team’s court under organized rules William Morgan Created.

There are many different achievements and history made from the creation of volleyball until now.

William Morgan was born in the state of New York and studied at Springfield College in Massachusetts. While attending Springfield, Morgan met James Naismith who invented basketball in 1891. Morgan was motivated by Naismith’s game of basketball designed for younger students to invent a game for the older members of the YMCA. William Morgan’s basis for the new game of Volleyball was the then popular and similar German game of Faustball and a few other sports including, tennis, basketball, baseball and handball.

William Morgan graduated high school from Northfield Mount Hermon School and moved on to hen attended the YMCA International Training School; now known as Springfield College in Massachusetts with James Naismith, the inventor of basketball. Morgan and Naismith wanted careers in Physical Education at the YMCA. Morgan spent one year working prior to graduating from Springfield College in Auburn, Maine, at the YMCA. During the summer of 1895, Morgan moved to Holyoke, Massachusetts, where he still to worked for the YMCA as the Director of Physical Education. Since Morgan was the Director he was allowed to devise workout plans and teach sports in depth to the young male adults.

February 9 1895, the first volleyball game, originally called “Mintonette”, was played in Holyoke Massachusetts at a YMCA. William Morgan saw basketball as extremely physically demanding, because you had to constantly run up and down the court. He didn’t think that his was something that older, non-athletic adults, and businessmen, weren’t in good enough shape to do. Seeing this, he began to create a game with similar objectives to basketball, but for people who weren’t in as good of shape, such as a group of middle-aged businessmen who were members at his YMCA. He also borrowed ideas from a few different sports, such as tennis, handball, baseball, and badminton to make volleyball. He used the inside of a basketball as the first volleyball. In the original rules, the net would be 6 ft. 6 inches, this was because he wanted it a little taller than most of the men who would be playing it. It would have a court that was 25 ft. By 50 ft., so it could easily be played in different YMCAs. It had two teams of any number of players, because he wanted it to accommodate differing sized groups. Each match consisted of nine innings. Each team could serve three times per inning. There was no limit to the number of times each team could contact a ball before volleying it back to the other team. Each server was allowed two tries to get the ball over the net. A point would be awarded to the other team if the ball hit the net, except in the case of a faulty first serve, if the ball failed to be served back to the other side before hitting the ground; or if the ball was hit outside of the court by the team that had just returned it over the net. Mintonette was first played at his YMCA and the rules were tweaked over the course of a little under a year until 1896 when Morgan wrote down the “final” rules and submitted them for review at a YMCA Physical Director’s Conference. At that same conference at the International YMCA Training School, the first exhibition game was played between different YMCA groups. One of the spectators of this exhibition match, Dr. Alfred T. Halstead suggested to Morgan that a better name for the sport than Mintonette would be “Volley Ball”. Volleyball was originally two words until 1952, when it was officially changed to one word because the game primarily consisted of volleying a ball back and forth. Morgan liked the new name and so re-named the sport.

Volleyball received an unexpected boost with the outbreak of WWI. The YMCA established a War Office, which decided to include volleyball in the recreation and education program for American armed forces at home and abroad. Thousands of balls, nets, and rulebooks were distributed to U.S. troops. By the end of the war, the game had traveled with the army to France, Italy, and Egypt. It was especially well received in Eastern European countries where long, harsh winters made indoor sports attractive. Russians discovered volleyball in the early 1920s when the game was played at YMCAs in the new Soviet Union. Within a few years, Russians had claimed the sport as their own. In 1927, Soviet officials ejected the YMCA as a “capitalistic, bourgeois, and religious” organization, but volleyball stayed. The sport became so popular in the Soviet Union that within a decade over 400,000 people played the game. The USSR held the world’s first national volleyball championship. One match was played on the stage of the Bolshoi Theater. World War II continued the global spread of volleyball. The Federation International de Volleyball says “everywhere, from the South Pacific to the Finnish front, volleyball drew crowds among troops engaged in the Second World War.” The sport was especially well-adapted to the limited space on aircraft carriers. In the 1920s and 1930s, women began to play the game. Russia won the first world championship for women held in Moscow in 1952. The rapid growth of California’s population after WWII created another venue for and variant of the game beach volleyball, it received official status in 1986.

Today volleyball is one of the most popular team sports in the world and is still growing, though obviously professionally speaking; it’s still not as popular as sports such as association football, Baseball, Basketball, American Football, or the like. The Federation International de Volleyball is saying that they believe is currently the world’s most played team sport. Volleyball first reached Asia in 1908 when a Springfield College graduate demonstrated the game at the YMCA in Tokyo. In 1910, two representatives of the Y brought the game to China, and the YMCA director in Manila introduced it to the Philippines. William Morgan, the Holyoke inventor of the game, died in 1942 at the age of 68. If he would have lived just a little bit longer he would have got to see the creation of an international volleyball federation in Paris. In 1964, the International Olympic Committee recognized volleyball as an official Olympic sport. Although it is not as popular in the United States as basketball but volleyball was played all over the
world. In 1946 A study of recreation in the United States showed that volleyball was ranked fifth among team sports being promoted and organized. In 1947, the Federation Internationale De Volley-Ball was founded in Paris. In 1948, the first two-man beach tournament was held. In 1949, the first World Championships were held in Prague, Czechoslovakia. In 1949 USVBA added a collegiate division, for competitive college teams. For the first ten years collegiate competition was sparse. Teams formed only through the efforts of interested students and instructors. Many teams ended when the interested people left the college. Competitive teams were not in one place. In 1951 Volleyball was played by over 50 million people each year in over 60 countries. In 1955 – Pan American Games included volleyball. In 1957 The International Olympic Committee stated that volleyball was an Olympic team sport that would be in the 1964 Olympic Games. In 1959 the International University Sports Federation held the first University Games in Turin, Italy. Volleyball was one of the eight competitions held. In 1960 Seven Midwestern colleges created the Midwest Intercollegiate Volleyball Association.

In 964 Southern California Intercollegiate Volleyball Association was formed in California. In the 1960’s new techniques added to the game included, the soft spike, forearm pass, blocking across the net, and defensive diving and rolling. In 1964, Volleyball was introduced to the Olympic Games in Tokyo. The Japanese volleyball used in the 1964 Olympics, was made up of a rubber carcass with leather paneling. The balls in the competitions today look pretty much the same. In 1965, the California Beach Volleyball Association was formed. 1968 National Association of Intercollegiate Athletics made volleyball their fifteenth competitive sport. In 1969 The Executive Committee of the NCAA proposed addition of volleyball to its program. In 1983, the Association of Volleyball Professionals was formed. In 1984, the US won their first medals at the Olympics in Los Angeles. The Men won the Gold, and the Women the Silver. In 1986, the Women’s Professional Volleyball Association was formed. These are just few accomplishments and impacts volleyball had. Volleyball is beginning to become one of Americas, and the world’s elite and popular sports. Ironically Basketball and Volleyball were created no more than 30 minutes apart and in the same time period. Today volleyball is one of the most popular team sports in the world and is still growing, though obviously professionally speaking; it’s still not as popular as sports such as association football, Baseball, Basketball, American Football, or the like. However, the Federation International de Volleyball claims that it is currently the world have most played team sport. Volleyball is growing and will always continue to do so. 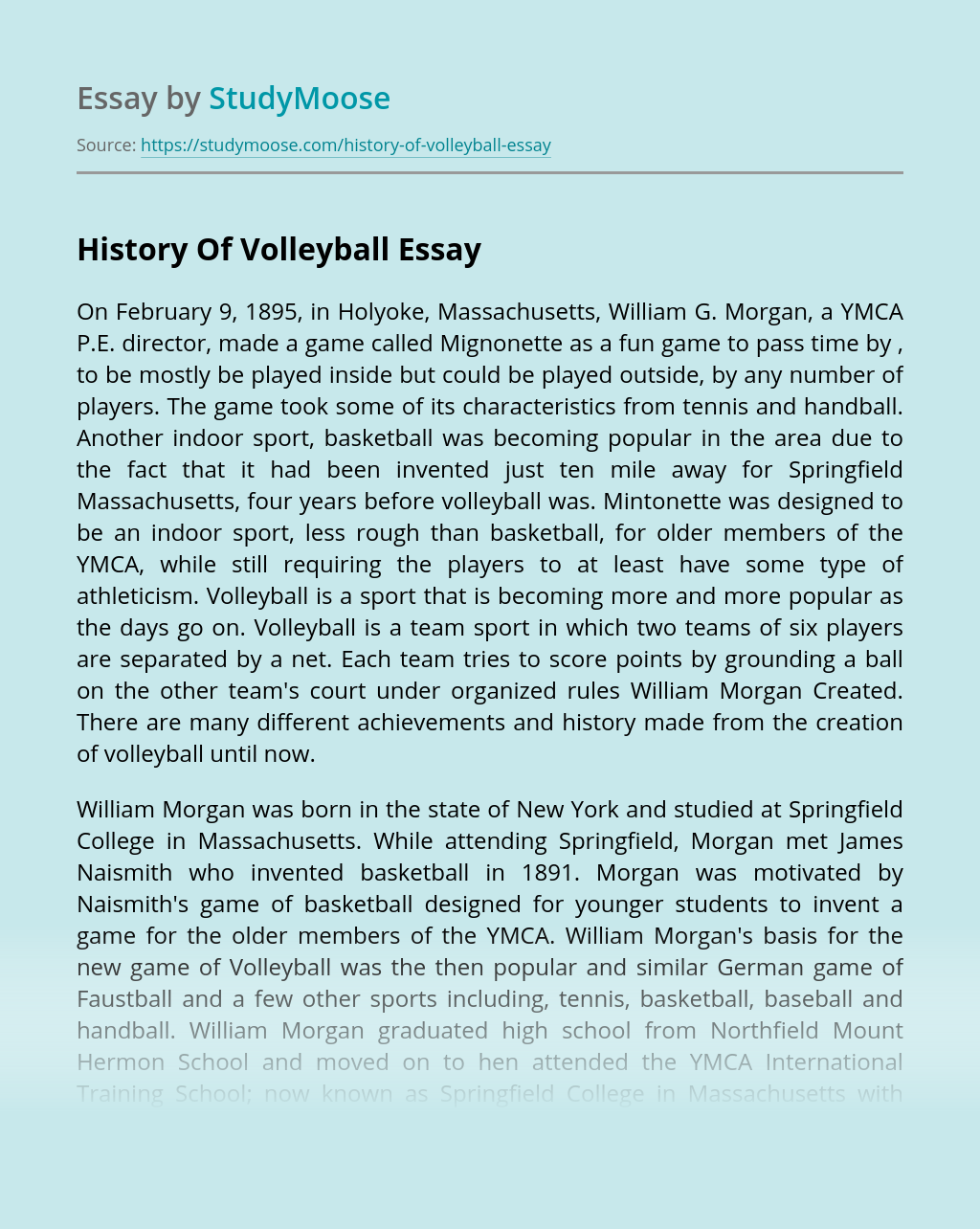