History Of The Panama Canal History

The completion of the Panama Canal was the climax of a combined effort of knowledge and American money used to dominate nature. The French failed in their attempt at control over the natural world because they lacked the knowledge of how to fight the environment of Panama, as well as the money to cut a sea-level canal through the jungle. In addition, when they were given scientific evidence as to how malaria was spread, they did not accept it. The canal could not have been completed by the Americans were it not for the risks taken by them.

Don't use plagiarized sources. Get your custom essay on
“ History Of The Panama Canal History ”
Get custom paper
NEW! smart matching with writer

The threat to human life was great, and the sheer size of the canal project was a great task as well. The Americans succeeded in dominating nature via the completion of the Panama Canal.

One of the risks was the environment of Panama, which posed a great problem to the French and Americans. Panama has a tropical environment, with temperatures varying between 75 and 85 degrees.

With over 500 rivers, it is a very wet environment, making it very easy for disease to exist. When the French began constructing the Canal, they faced the problem of many diseases, especially malaria and yellow fever. The French word for malaria, paludisme, meant marsh fever. It was widely believed that poisonous marsh gas was the cause of malaria. This belief, which was untrue, was one of the main reasons for the French failure in Panama. Over 22,000 French workers died, mostly due to disease, during the construction of the Panama Canal.

There were many doctors who found evidence contrary to the belief in bad air. In 1880, Ferdinand de Lesseps, the builder of the Suez Canal, launched the Compagnie Universelle du Canal Interoceanique, the construction company responsible for building the Panama Canal. That same year, a French doctor stationed in Cuba by the name of Alponse Lavaren discovered small bodies in a malarial blood sample that he deemed to cause the disease. Twenty six years earlier, Lewis Beauperthuy concluded that both yellow fever and malaria were caused by venom injected by mosquitoes. Earlier yet, in 1848, an American named Dr. Josiah Clark Nott mentioned briefly in a paper that malaria and yellow fever were conveyed by insects, and possibly by mosquitoes. However, none of these claims were accepted by the French, and their wrong approach to fighting the diseases in Panama led to so many deaths.

Based on their knowledge of the diseases, the French took measures to prevent mortalities. A hospital was built near Panama City, regarded as the best in the tropics. A smaller hospital was also built near Colon, as well as a convalescent sanitarium at Tabago. These were placed under the control of Dr. Louis Campanyo. Sewage was improved, bodies were quickly disposed of, and quinine was mass-distributed. The French knew that quinine helped bring down fevers caused by yellow fever and malaria, but did not know why. Because the French believed marsh air caused malaria, they dried up swamps and encouraged people to avoid them. However, because no one knew the true cause of the fevers, hospital mortality rates were near 75%, and most sick employees avoided hospitals. Even worse, pans of water, perfect breeding grounds for mosquitoes, were placed next to each hospital bed. There were many other afflictions that killed and sickened French workers, such as typhoid fever, smallpox, pneumonia, dysentery, beriberi, food poisoning, snakebite, and sunstroke. Over 22,000 French workers, most of them natives of Panama, died during the eight years of construction.

The Americans learned from the mistakes of the French, and listened to the multitude of scientific evidence which indicated that the mosquito was responsible for malaria and yellow fever. Colonel William Crawford Gorgas, who was appointed Head of Hospitals and Sanitation by the Canal Commission in July 1904, quickly set to work fighting disease. Vaughan Cornish describes it well:

Natives of the [canal] Zone and West Indian negroes are immune from yellow fever, but this swiftly fatal disease has invariably broken out on the Isthmus [of Panama] when a large number of non-immune strangers have gathered thereâ€¦ Heroic measures were adopted; the force of the Sanitation Department was increased to four thousand men; the city of Panama was cleansed and fumigated house by house, the stegomyia [aedes aegypti] mosquito which propogates the disease was exterminated, and the epidemic ceased.

Gorgas believed, based on the evidence brought forth by scientists that the Aedes aegypti, a type of mosquito, was the cause of yellow fever, and that anopheles, another type of mosquito, was the cause of malaria. Gorgas’ main goal was to eliminate these mosquitoes from the Panama Canal Zone, an area surrounding the canal that was ten miles wide and forty miles long. He divided Panama City into eleven districts and Colon into four. In each district, inspectors searched buildings for mosquitoes and put oil, which was believed to kill mosquito larvae, in stagnant water. Buildings in which evidence of mosquitoes was found were quickly fumigated. Amazingly, within the first year of Gorgas’ appointment, every residence in Panama had been fumigated, using up the entire U.S. supply of sulfur and pyrethrum. The Americans were proving to be much more successful in their fight against Panamanian disease than the French.

Gorgas successfully eliminated malaria and yellow fever from the Panama Canal Zone. Thanks to him, only one case of yellow fever was reported during the entire work process. Yellow fever was wiped out in the Canal Zone by 1906. The hospitals were the best in the tropics, and 32,000 patients were treated a year. Unfortunately, blacks died ten times faster than whites, because they were natives, and were not provided housing by the construction company. In addition, many black workers lived outside of the Canal Zone. Thankfully, though, only approximately 4,500 black workers died, which was much less than the amount of natives working for the French who died. Today, over a hundred years later, the Panama Canal Zone is considered yellow fever and malaria free.

Construction of the canal itself was another complication in the quest to complete it. The French began construction on the Panama Canal on January 1, 1882. Ferdinand de Lesseps wanted to construct a sea-level canal. This was a great risk. The excavation in itself was a lot more difficult than digging in sand during the construction of the Suez Canal. In addition, the Chagres River, which ran across the planned area of the canal, flooded during the rainy season, which would have threatened the canal had it been completed by the French. Another flaw was the fact that the French made the slopes of the canal too high, which caused many landslides. When they abandoned the project, they were about 2/5 of the way done. The Compagnie Universelle went bankrupt and closed on February 4, 1889. The French took a gamble in attempting to construct a sea-level canal, and it didn’t pay off.

The United States took a great risk in terms of the sheer size of the Panama Canal. No concrete construction that large was undertaken until the construction of the Hoover Dam in the 1930’s. There are 46 lock gates, the total mass being about 58,000 tons. Each gate has two doors, or leaves, each weighing 300-600 tons. The Gates stand between 47 and 82 feet tall, and each leave is 65 feet wide and seven feet thick. At the bottom of each leaf is an eighteen ton still. In addition, ships are raised an amazing height above sea level: “Three locks in flight at Gatun raise vessels from the level of the Atlantic ocean to the surface of Lake Gatun, 85 feet above mean sea- level.” These risks paid off, but if the scale of the construction could not have been achieved, the canal could not have been constructed. .

In conclusion, both the Americans and the French took risks when confronting the building of the Panama Canal. The abundance of disease in Panama at the time posed a great threat, and the nature of the terrain made building the Canal itself a difficult task. The French lacked the knowledge and resources necessary to complete the Canal within the guidelines of their intended methods. The Americans learned from the French mistakes and built off of their failures, and conquered nature by completing the Panama Canal.

History Of The Panama Canal History. (2019, Aug 19). Retrieved from http://studymoose.com/history-of-the-panama-canal-history-essay 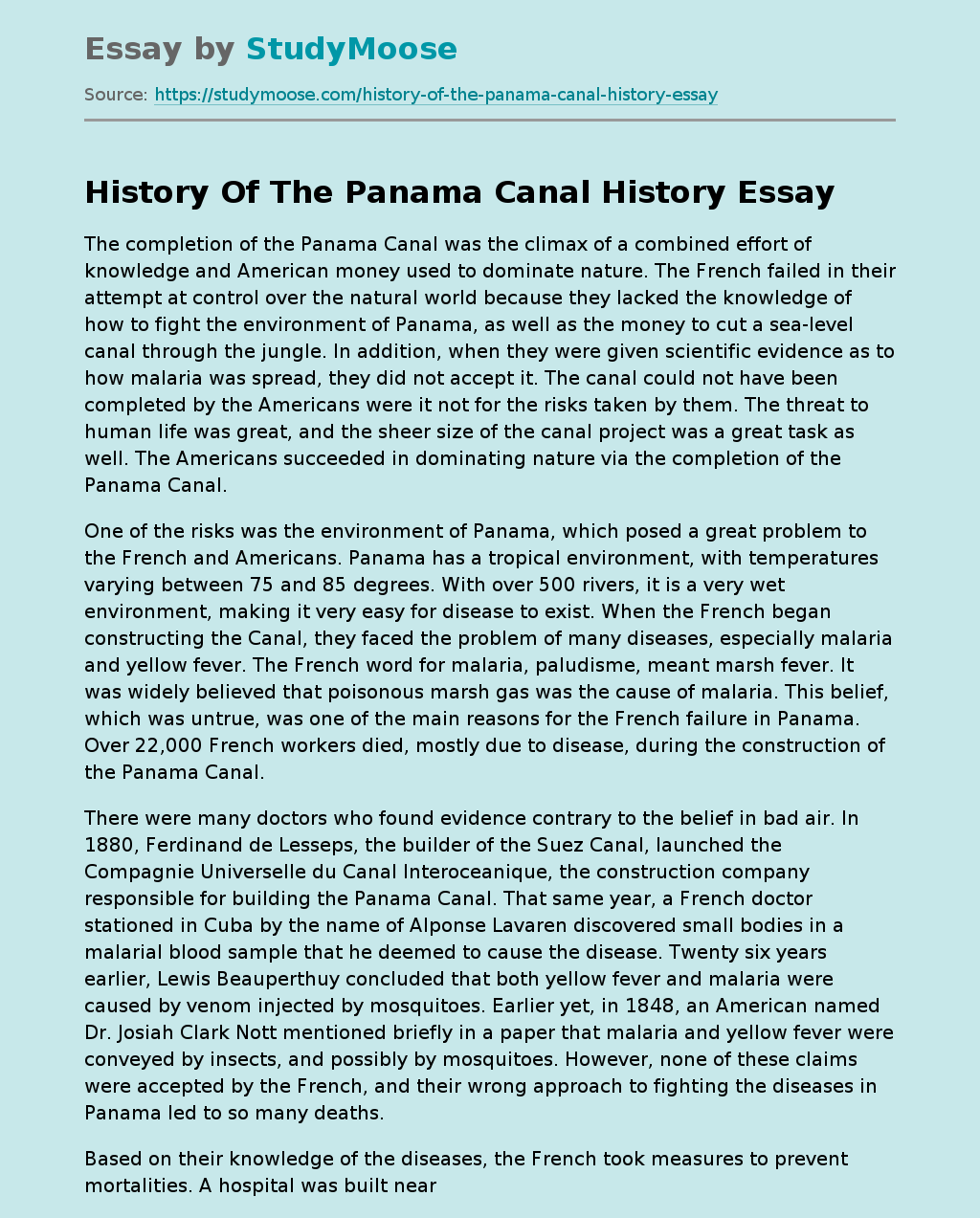