Central Park was the first landscape to be introduced in the United States. Based on the parks reputation, we forget to acknowledge the history and the amount of time it took the landscape to be fully developed. We also fail to realize the amount of change Central Park took in order to innovate and renovate based on the people around the park or money being raised for the park. Although Central Park is one of the main attractions in the United States to bring people together, at one point that wasn’t the case.

Don't use plagiarized sources. Get your custom essay on
“ Old History Paper – The History of Central Park ”
Get custom paper
NEW! smart matching with writer

Central Park was first established by Fredrick Law Olmsted and Calvert Vauz. On July 21, 1853, the New York State Legislature enacted into law the setting aside of more than 750 arches and land central to Manhattan island to create America’s first major landscape public park. From this, there was competition that brought many talented architects to introduce their idea on what the landscape would look like.

The winner of the competition in 1858 was not an architect but a journalist and agriculturalist Fredrick Law Olmsted and trained architect Calvert Vaux. They named their plan “Greensward” for their preferred landscapes of sweeping meadows and vast water bodies designed to appear limitless, while brilliantly belying the park’s long narrow rectangle within New York City’s rigid grid. The idea was to put a variety of trees, plants, rocks, grottos, caves, and cascades which will bring people into the landscape. This park would be open to all who called the United States of America and New York Cite home.

The Greensward Plan includes 36 bridges which none were alike. They were designed with some artistic attributes which made all of the bridges different. Some were made from granite and others were made with cast iron. The bridge’s whole purpose was to span over valleys and water which showed some sort of richness to the site.

Richness and beauty was an important thing when it came to the design on Central Park. But with richness and beauty, there was also ugliness. When plans were made for the site of the park, the land was owned and occupied by free Black and Irish men. Before the park could be constructed, all of these people had to be removed from the land. Since the land looked poor, removing people from their home made it easier to renovate. The construction process was at first a success until the lack of money came into consideration. There was a public outcry of the $5 million price tag of the land for first section of the park. This was a problem because the price was 3 times the budget they had to complete their project. Since it was 3 times their budget, the approximate time it would take in order to complete their project with some help would be about 16 years from 1857. In order to complete this project, most of the work would be done by Irish and Scottish emigrate. Olmsted dealt with a lot of political issues until Andrew Haswell Green. He was a Forme New York City board of education president that sped up the construction process of central park. He purchased an additional 65 arches for the north side of the park which lead the portion between 106th and 110th streets which was called rugged exposed rock terrain. Eventually The American civil war broke out In the middle of the parks construction which lead to the decrease in workers and money. This drastically slowed down the construction process of central park. Since the park lost a lot of its works, many engineers that were in the war helped shape the park from its previous design. The use of explosives to clear rock and make many of the parks tunnels were some of the actual perks of the war for the park. The American Civil war ended around April 9th, 1865. This brought a huge decrease in construction finance since most of the money went into rebuilding the United States. Despite this being a problem for Central park, eventually much of the progress was primarily done until 1873 when central park was established. The only thing that wasn’t complete were the soil needed for the site, the trees and plants. Since the landscape was primarily artificially places, Olmsted and Vauz wanted people to feel that everything that was planted was already there or to feel natural/beautiful. By the time the park was actually completed, over 10 million cartloads of material had been moved out of the park and more than 1,500 species of plant life had been places into the park.

Progress from the beginning of the park’s development to 1873’s completion of the park meant to show a great progress to the American people. It showed that the Americans even after their civil war didn’t stop them from progressing the American landscape. The Formal Mall and the Bethesda Terrace were one of the many main attractions in Central Park. Visitors experienced these varied park scenes through a brilliant system of intertwined recreational roads: Twenty-eight miles of pedestrian paths, six miles of undulating drives to be shared by both equestrians and carriages and a rural bridle trail exclusively for horseback riding. With all these paths and walkways, bridges were one of most important things that kept a certain organization into central park. What was once a spot for sheeps became a park for sports, outdoor classrooms and music.

When there is progression, there is decline. By the early twentieth century, vicissitudes of the social, political and economic climate threatened the fabric of central park and caused its first serious decline. Robert Moses, Park commissioner from 1934 to 1960, received federal funding for the restoration of many eroded landscapes and crumbling structures, and embarked on massive public programming for the post-Depression populace. When Moses left office, Central Park lost its management which meant that the park wasn’t being taken care of as much as it once was. It could have been because of money problems or could be because of the people. Such a park is too aristocratic to be sanctioned in America, too artistic to be respected by the American populace. It would be an republican waste of money to make it, for only the rich would use it; or; if the poor used it, they would quickly destroy its beauty. It was sad that a place that was a symbol for many people in the United States to be slowly underrepresented. Visually and physically, Central Park was started to look like what no one wanted it to be. Meadows had become barren dustbowls: benches, lights, and playground equipment were broken, and the one-hundred-year-old infrastructure was crumbling. There is also an increase in garbage, graffiti and vandalism being left by the people. It started to become more and more different which lead to Central City needing a new renovation. Between 1987 and 2008, the conservancy led three successful capital campaigns towards rebuilding Central Park, ensuring the completion of the park’s transformation. This project leads to a new era for Central Park and its future.

The new era for Central Park needed to be established by first improving on the landscape. Blonsky created innovative management practices to ensure that those healthy new landscapes would have a skilled and dedicated staff to maintain them in a professional manner. But in order to maintain this huge landscape, there would need to be a lot of volunteers and financial support. Central Park’s restorations gradually fostered important social changes in public behavior that returned the sanctity of public space to Central Park and ultimately to New York City at large. First, the conservancy would have to establish a no garbage and graffiti rule so there wouldn’t be any damages to the park. Second, in order to maintain the beauty in Central Park, people in New York should treat it as if it is its own child. Despite his preponderant love for the naturalistic style in its broadest, simplest developments, he is quick to see when the formal, architectural style puts in a valid claim; and he realizes that even the most naturalistic landscape-work should not strive to appear actually natural, and should not even incorporate distinctly formal elements when they are required for use or for the right explanation of art as art. In order to maintain this art, love would need to be put into the park.

From 1858 to 2016, Central Park has made many different changes when it came to the park but also the people that surrounds the park. In 2016, the Central Park Conservancy launched Forever Green, a ten-year campaign to restore and preserve Frederick Law Olmsted and Calvert Vaux’s vision for the extraordinary landscape of Central Park. Following decades of investment by the Conservancy in essential rebuilding and infrastructure, this ambitious project led by Anne S. Harrison, Thomas L. Kempner, Jr., and John Paulson, will raise $300 million to enable vital long-term planning for the entire Park, its woodlands, historically and architecturally significant structures, playgrounds, and more. This means that the park will be reborn into urbans parks, lots of green spaces, and being able to easily maneuver the park. With the Central Park Conservancy Institute for Urban Parks, the Conservancy is developing programs that advance the stewardship of urban parks and green spaces. Now, Central park has made so many renovations when compared to 1858 to 2018/2019. It is more beautiful than it has ever been before based on the management and the love for the history of Central Park. Here Great intelligence and good taste always reveal themselves, and remarkable originality very often; and with a more thorough technical training the same qualities would undoubtedly always have marked all the minor features and details of his work.

Going back to the beginning, Central Park was an idea to bring many Americans together. People had to lose their homes in order for this project to work out. It took a lot of hard work and dedication in order to make Central park the way it is now. There was the American Civil War which slowed down the process of development but after it was done, money started to slowly flow into the park. Because of the Civil War, there were slight modifications which made the park a bit more genuine at hindsight because of the battle damage the war brought to the park. Olmsted and Vaux’s idea for the park didn’t go to waste after so many years since there were foundations that cherished the park as much as the developers did. People wanted the park to strive and live out its legacy because it was a symbol for the American people. Overall, Central Park is a place where it was meant for the American people to come together but it was also a place for anyone higher to lower class to come together as one. And for that, Olmsted and Vaux succeeded.

“Figure 5. Poor homes that were evacuated for construction”

“Figure 6. The Great Lawn, before and after restoration 1997”

Rosenzweig, Roy and Elizabeth Blackmar. The Park and the People: A History of Central Park. Ithaca: Cornell University Press, 1992 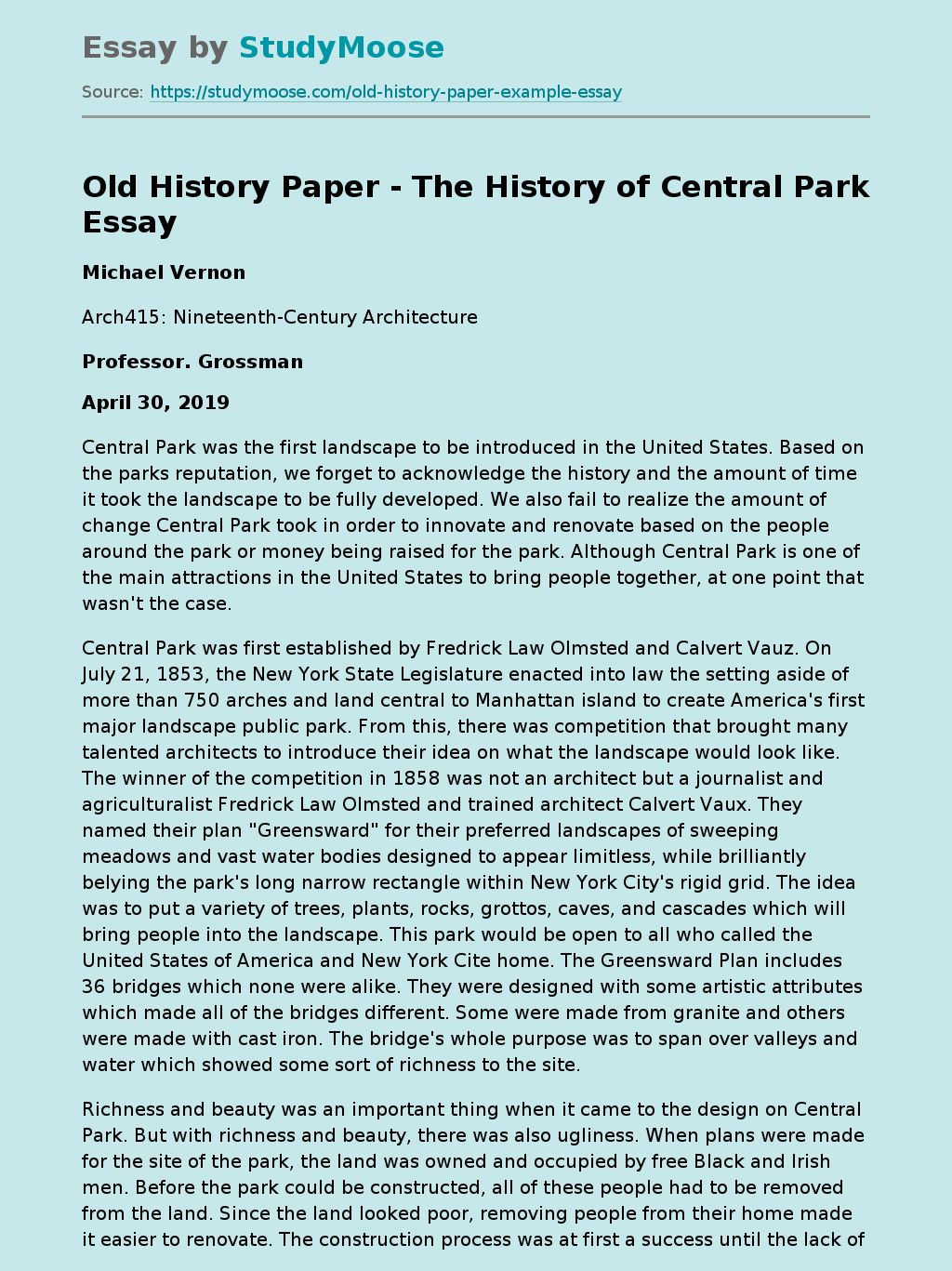