Gangs run the streets in South Central Los Angeles. They are respected, dangerous, and feared by all who are not involved in gang activity. Two major Los Angeles gangs are the “Bloodz” and the “Crips”. These two gangs are professionals at what they do such as murder, drug trafficking, and avoiding law enforcement. Protecting their territory and fellow gang members resulted in one hundred twenty eight homicides in South Central Los Angeles (Tamara). Gangs run all across the country and one million people estimated are involved with gangs and gang activity.

Don't use plagiarized sources. Get your custom essay on
“ Gangs in South Central Los Angeles ”
Get custom paper
NEW! smart matching with writer

The Bloodz and Crips are the west side’s major gangs and they have a huge impact on South Central Los Angeles. Killings everyday and more members initiated every day, it’s said that gangs will never end. The two major gangs of South Central Los Angeles have a history behind them worth knowing. The Bloodz are a well known and respected gang made up of close to nine thousand members, the Bloodz stack up well against their rival or otherwise known as the “Crips”.

The Bloodz are outnumbered by the Crips but they are growing stronger and proving themselves by keeping up with their rival.

The Bloodz were created to stand up to stronger gangs and give protection to smaller gangs. Five smaller gangs joined forces to stand up to their rivals. The Blood Five, The Lot Boyz, The Outlaws, and The Midcity Gangsters are the five to come together in 1982 to create the Bloodz (Tamara). They joined together and were becoming more violent and getting stronger but were still outnumbered.

The Bloodz are more involved with drug trafficking then any other criminal act such as robbing businesses or killing (Tamara). The Bloodz enemy the Crips is way ahead of them in all fields.

The Crips are the most respected and dangerous gang in South Central Los Angeles. There number one enemy is the Bloodz. The Crips are the strongest gang and are at a number of sixteen thousand members and are growing more and more everyday. They are very experienced and over populated because the Crips were created twenty years before the Bloodz. The Crips were created in the 1960’s by their leader to the present day Stanley “Tookie” Williams and his close friend Raymond Washington, The Crips were first named the “Blue Rage” then later renamed in 1972 to the Crips (Tamara).

The name Crips came into the picture when the gang started growing. Tookie and Washington weren’t allowed into the Boy Scouts as kids so decided to make their own groups and that’s how African American street gangs started (Soliz). The word CRIP symbolizes Common Revolution in Progress. These two respected gangs can be identified by their colors, tattoos, and symbols. These two gangs have a hatred for each other and would never wear the opposing color or the rival’s sign. The Bloodz wear red to symbolize blood. The Bloodz went with the west side color to show respect for their coast of the country.

The Bloodz wear red hats, shirts, pants, bandanas, beaded necklaces, and wear shoes name Christian Knight (CK) or known to symbolize a Crip Killa (CK) (Tamara). Different levels in ranking result in different tattoos. The leader has his last name across his shoulders with blood dripping out of it. The tattoos range from different shapes and sizes but are all related to the Bloodz. Their gang sign is very difficult; they use both hands and shaping their fingers to spell out “blood”. If you were to throw up (make) the sign in the wrong territory you could be disrespecting others or you could be critically injured.

They use their pointer finger and thumb to make a “C” for Crip. The Crips are the largest, most respected gang in Los Angeles, but the Bloodz can stand their ground against them. The Bloodz and Crips have a very big impact on society in South Central Los Angeles. Everyday someone across the United States of America someone is born into gang activity or are initiated into a gang (Soliz). More than one million people across the United States of America are involved in gang activity and the number is increasing every day (Soliz). The Bloodz and Crips are involved in everyday killing of innocent people and rival gang members.

Last year law enforcement arrested more than six hundred fifty gang members in South Central Los Angeles. The Bloodz created a jail called the United Blood Nation (UBN) to keep fellow gang members in prison safe. Some men and women join gangs through imprisonment and have to stay in the gang they joined the rest of their life even if released from jail or prison. The Latin Kings run the jail system so the United Blood Nation or UBN was created to stand up to them. Once out of jail or paroled they will be recognized and initiated into the real gang.

Gang violence is at a thirty year low in the Los Angeles. Gang violence is decreasing every day. Gangs are growing but becoming not as violent dealing with respect and the fact that the Bloodz and Crips are stepping up their game coming up with a temporary truce and teaming up against law enforcement. Police Chief Sergeant Scott Michael says “Instead of two hundred Bloodz fighting with two hundred Crips there are four hundred gangsters coming towards law enforcement.

The Bloodz and the Crips have a very long and complicated history with one another, behind their names, and leaders but these two brotherhoods are very similar both lurking for the same power, respect, and strength in numbers. Both of these gangs have sacrificed many people fighting for no reason. Government and lawmakers are doing everything they can to end gangs, violence, and drug trafficking. These two gangs are from two different worlds when coming face to face. The hatred is so strong yet they have so much in common. Two different territories, two different colors, but two of the very same lifestyles. 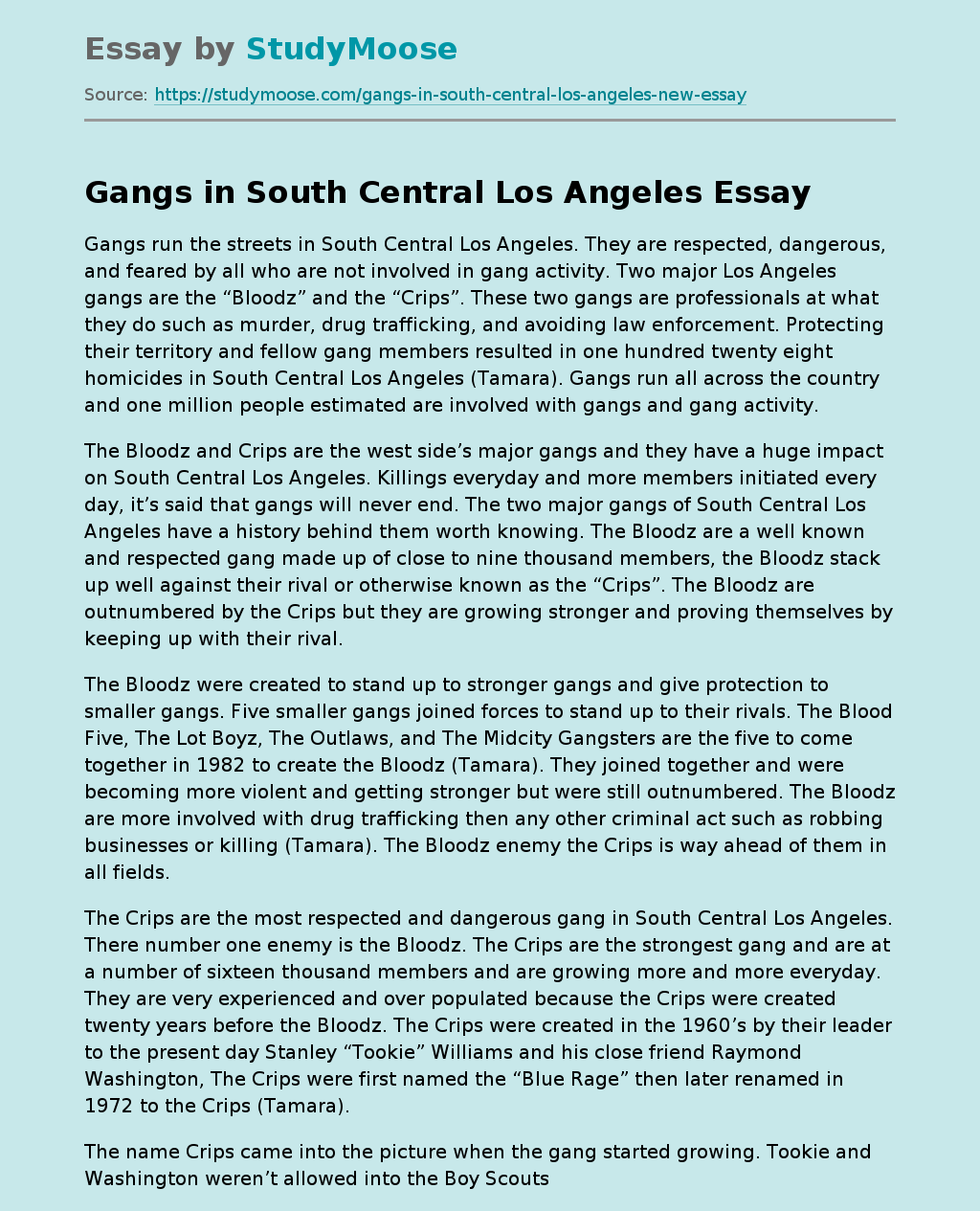